Germantown Academy and Springside Chestnut Hill split their two official Inter-Ac League games this fall, and last Tuesday the Patriots and Blue Devils got to meet a third time. 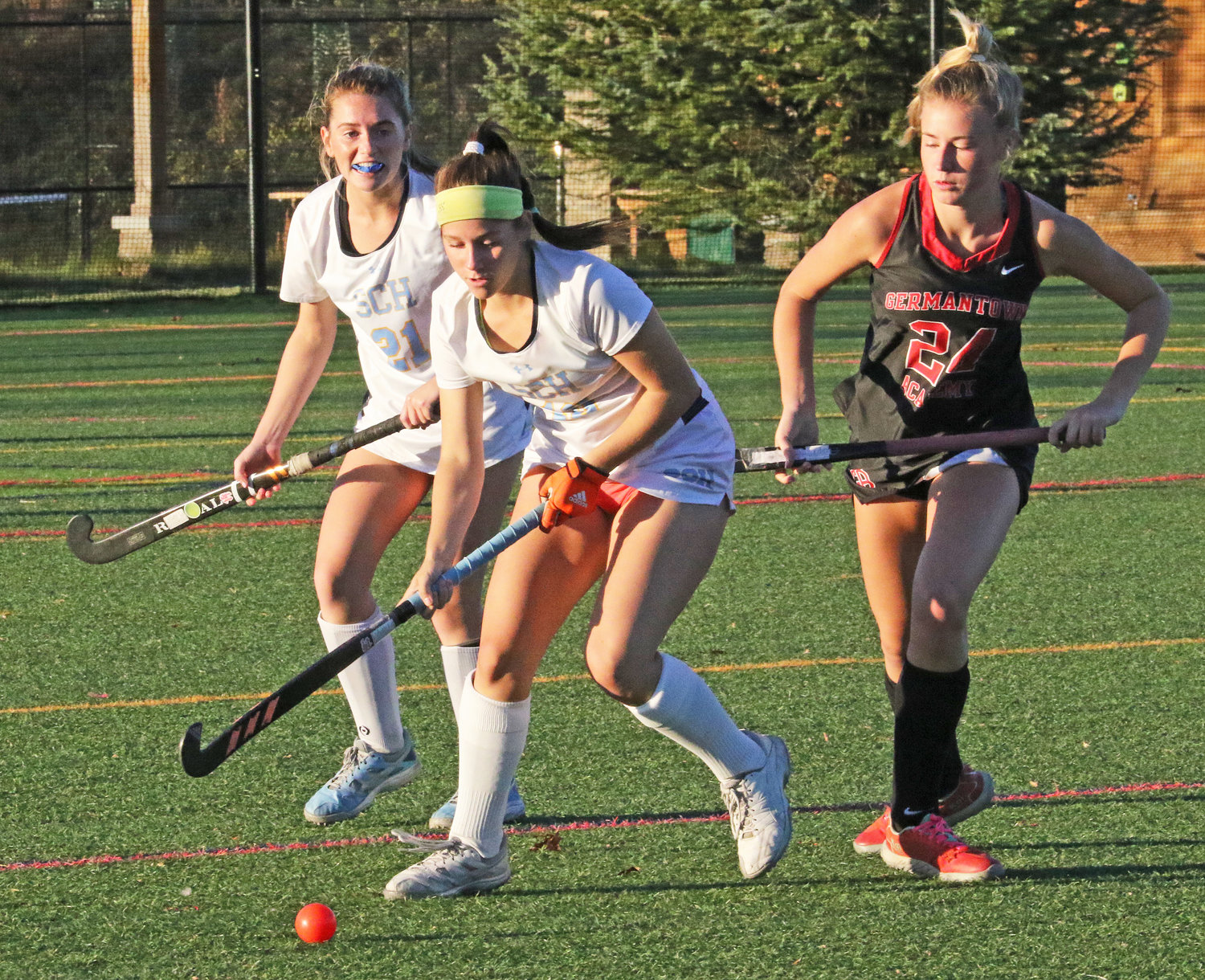 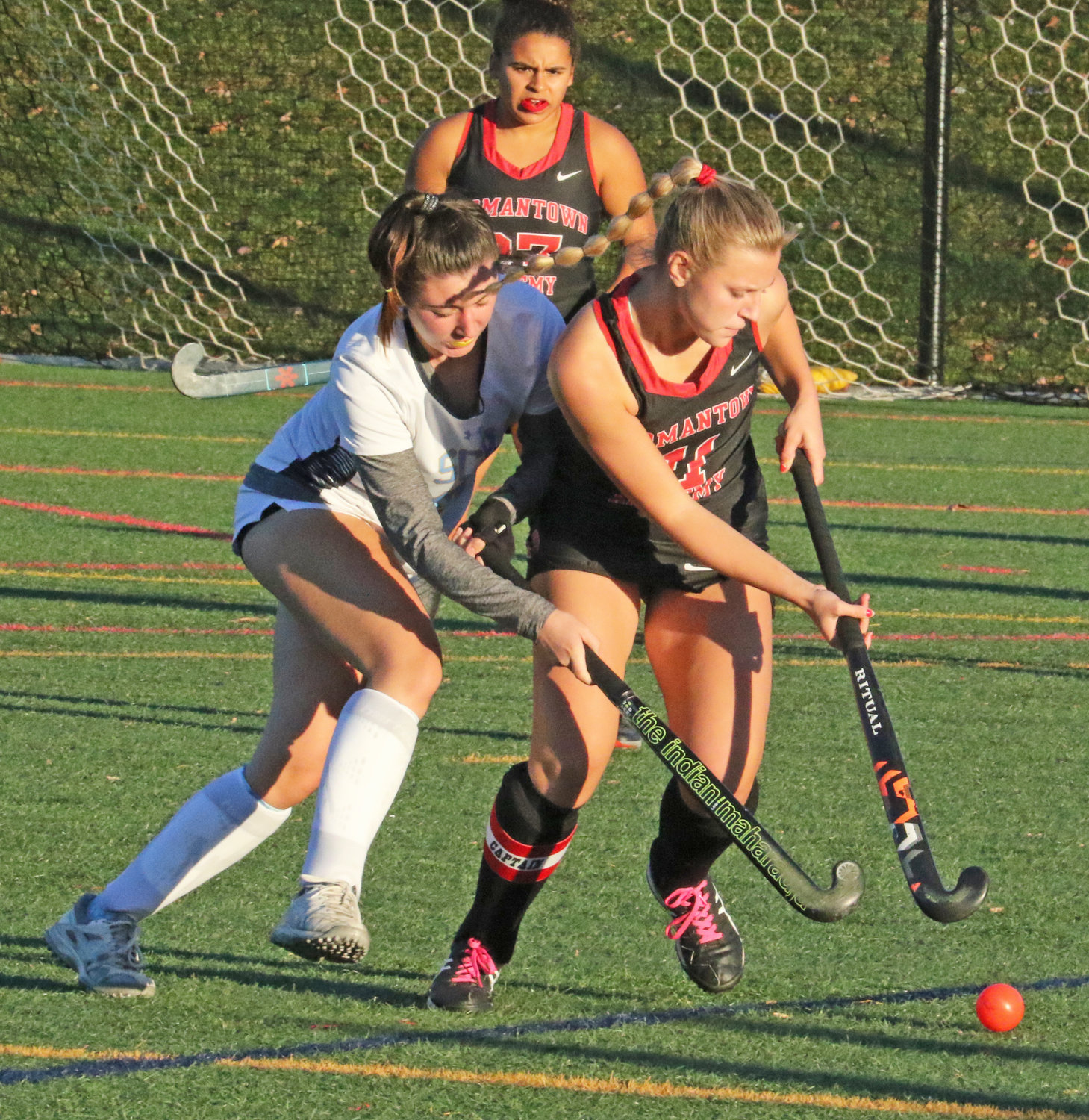 Germantown Academy and Springside Chestnut Hill split their two official Inter-Ac League games this fall, and last Tuesday the Patriots and Blue Devils got to meet a third time in a Pa. Independent Schools tournament quarterfinal.

Back in late September, GA won the first encounter between the teams, 4-3. After that fortune favored SCH, which adapted to some new additions to the roster this fall and really began to gel as a team in the second half of the season. The Blue Devils would win the regular-season rematch with GA and last week's playoff game by a combined tally of 10-3.

In the 6-2 SCH playoff win last Tuesday senior Kaitlyn Melinson scored twice and there were single goals from four other players. After a 0-0 opening quarter, the Blue Devils notched two goals in the second and the Patriots got on the board just before halftime to make it 2-1.

Again in the third quarter, two markers for SCH were followed by one for GA. Springside put in two more goals in the fourth period for a convincing win. Its reward would be to advance to a semifinal game at Hill School, the top-seeded powerhouse.

Although SCH was seeded fourth and GA was ranked fifth for the PAIS tourney, GA had a chance to finish higher in the Inter-Ac standings than the Devils. As of Tuesday SCH's league season was complete at 4-6, while GA was 4-5 with its rematch against Penn Charter still to come on GA-PA Day. Germantown won the initial clash with the Quakers in early October, 2-1.

Against the rest of the league, the difference between the Devils and Patriots was that SCH split its two games against Agnes Irwin, while GA beat the Owls both times they played.

In last Tuesday's PAIS game at SCH, the Blue Devils attacked at the outset, but not long after that GA made its first offensive push. On one Springside sortie up the field, junior Riley O'Donnell dribbled through most of the GA team, then was halted by junior Hadley Harbert.

Germantown had a pair of penalty corners later in the first quarter. The ball wound up in a jumble of players in the middle of the circle on the first attempt, and on the second corner a shot by senior Claire McMichael was saved by the Blue Devils' junior goalie, Colleen Conlan (nine saves total).

Soon after the second period began with the score still 0-0, Conlan's twin sister Devyn drove the ball back down at the Patriots' cage following a corner insertion. There was no finish on this play, but SCH kept the ball in play in the circle. Junior Madison DeStefano, the GA keeper (five saves) dove to the ground to stop one shot, but the ball was still loose and the Devils' Kerry O'Donnell (Riley's twin sister) poked it in.

The first goal was on the board three-and-a-half minutes into the second quarter. SCH soon came close to scoring a second time in a scramble near the left post of the visitors' cage.

GA then seized the initiative, but three corners in a row failed to produce a tying goal. The Blue Devils made it 2-0 with a little over two minutes left in the first half, when sophomore Veronica Goettner fired from the left side of the circle and Melinson was there for the finish at the right post.

It looked as though that was how the half might end, but GA made a late rush and was awarded a corner with no time on the clock. A very deft corner execution for the Patriots began with senior Kate Brogan's insertion straight out from the right endline. Gracen Brant, a senior who would sign a letter of intent for Lehigh University the next day, received the ball high on the right and passed laterally to her left. From there, fellow senior McMichael pounded a shot into the goal. It was 2-1 at the break.

Springside had a two-goal lead again four minutes into the third quarter, when sophomore Kira Vakil scored from a pack of players in front of the cage after Kerry O'Donnell threaded the ball inside. With eight-and-a-half minutes left the tally rose to 4-0 on a corner play, with Devyn Conlan receiving the insertion and whacking the ball into the backboard.

As in the second quarter, the Patriots came up with a late goal, with sophomore Sydney Wanner scoring off an assist from Harbert.

The visitors would not score again, though, as the Blue Devils controlled much of the play in the fourth quarter. As the clock dipped below 13 minutes remaining, SCH restarted play on a corner, and off the initial shot by Riley O'Donnell, the ball was tipped in by Melinson for her second of the day. About a minute later, Devyn Conlan earned an assist on a goal by sophomore Baylin Manusov, tacking the 6-2 final on the board.

On a Germantown Academy corner with a minute remaining, the Pats got off a shot that missed wide on the left.

UPDATE: Springside Chestnut Hill's season ended in the PAIS semifinals with a 5-0 loss to top-seeded Hill School. In the other semifinal, third-seeded Episcopal Academy won, 3-2, over the Academy of Notre Dame, the second seed. On Saturday, Germantown Academy completed its Inter-Ac season by defeating visiting Penn Charter, 3-2. At 5-5 in the league, the Patriots finished third behind Episcopal and Notre Dame (both 9-1).