The Blue Devils are pictured immediately after clinching the 2019 Inter-Ac League championship, the first league title in the history of the program. by Tom Utescher On Oct. 22, the girls of … 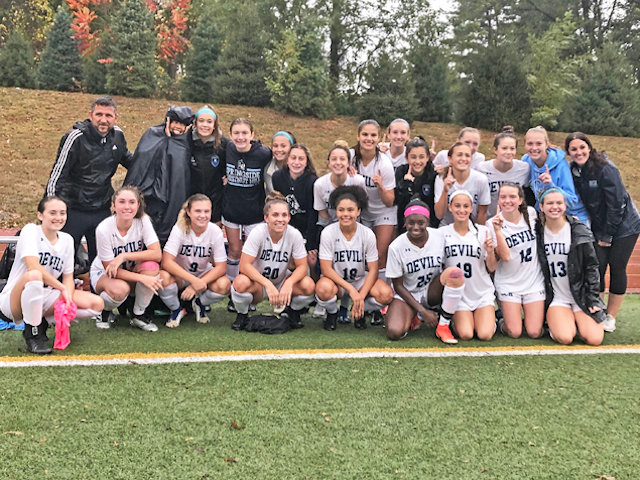 The Blue Devils are pictured immediately after clinching the 2019 Inter-Ac League championship, the first league title in the history of the program.

On Oct. 22, the girls of Springside Chestnut Hill Academy clinched the 2019 Inter-Ac soccer championship with a 5-0 victory at the Academy of Notre Dame that gave them a 10-0 record in the league.

The Blue Devils were not content to stop there. Ringing up another 5-0 win at the expense of Baldwin School three days later, they then set their sights on completing a 12-0 run through the Inter-Ac schedule when they took on visiting Episcopal Academy last Tuesday.

Episcopal, the 2017 league champion and the 2018 Pennsylvania Independent Schools champion, had only lost 1-0 to the Devils in its initial encounter at the beginning of October. Last week, SCH was leading 1-0 at halftime, and then the hosts tacked on two more goals in the second half for a 3-0 victory. Junior JoJo McShane scored the first and last goals, with freshman Lisa McIntyre supplying the other point.

McShane, the team’s emotional wellspring, noted, “We only beat them by one goal the first time. We scored with about 11 minutes left, and we wanted to get control of this game earlier than that. I think everybody had some butterflies before the game. We had already won the league, but this was still important.”

With the 3-0 outcome, junior goalkeeper Julia Wilbekaitis chalked up her sixth Inter-Ac shutout. For her first two seasons at SCH, she had split time in the cage with a more experienced keeper – 2019 graduate Sena Houessou-Adin. Now she’s alone in the spotlight, with freshman Ellie Stratz serving as her understudy.

“Instead of having that older mentor,” she noted, “I’m trying to be the older mentor to Ellie.”

The junior has become more vocal this year, communicating with her teammates and helping direct the defense.

Previously, she said, “Being an underclassman, I was a little intimidated by the upperclassmen, but I knew this year I had to step up and be a leader on the field.”

At the start of preseason training, midfielder McShane already had a concrete objective: becoming the Inter-Ac MVP.

As the season got underway, she said, “I realized how good a team we had, and it wasn’t going to be all individual, but I still got the results I wanted so I’m really happy.”

A little before the middle of the first half of last week’s league finale, SCH delivered the ball into the Episcopal box on a free kick. The Churchwomen pushed it out over the 18, but Blue Devils sophomore Maya McDermott sent it back inside, where McShane ran onto the ball and scored.

Around the same point in the second half, McIntyre added the first insurance goal, and when McShane made it 3-0 later on, the Devils felt truly secure. They’d only given up more than one goal one time throughout the season, in a 4-2 victory over Penn Charter.

Maria Kosmin, the fourth-year coach for SCH, can’t stress enough the key role played by the team’s defensive unit, with senior Abbie Rorke and sophomore Olivia Myers as the center backs, and junior Esther Lamb and freshman Julia Thomson on the wings.

“We had some shake-ups early in the season because of the young talented players who came in,” Rorke said. “Julia has great skill and technique and she became one of the outside backs, and I moved inside with Olivia. Olivia and I play together well, and our other outside back is Esther, who is one of the fastest players you could see on the field. It's also great having Lauren Sullivan in front of us in the midfield. She's so good at slowing other teams down in the midfield that sometimes the ball doesn't even get to us.”

For pure toughness, the Blue Devils' touchstone is senior Maddie Niebish, who can play just about any role on the field, from scorer to dogged defender. Never one to shy away from a challenge, she's looking forward to a career in the military.

Rorke, a three-sport athlete at SCH, feels that she and her soccer teammates are getting just the right amount of direction from the sidelines.

The senior said, “Maria has done a fantastic job of attracting new players and then organizing us and bringing us together as a team. She strikes a really good balance between having fun playing the game and also being extremely committed. The decisions she makes are always based on what’s going to be the best for the team in order to succeed.”

Kosmin commented, “People tell me that it’s a fun team to watch, and I think that’s because the girls each put their body and their heart into every game. As coaches, there’s never a day when we have any doubt that they’ve come ready to play. I just have to send them out and coach them; I don’t have to push them and I don’t have to baby them. They have fun together, but they definitely know when it’s game time.”

Ylber Mezani, a former Arcadia University soccer player like Kosmin, came on board as assistant coach for the Blue Devils this fall and settled right into his new role.

"His energy cannot be matched," Kosmin said. "He's very positive – a glass half-full kind of person. He's very vocal on the sidelines, and the girls have no problem hearing him. He's especially good with the defense."

As Kosmin noted, the players don't need very much outside motivation. Away from the field, they are also goal-oriented in the classroom. McShane, for example, enjoys English and history classes and plans to enter law school. Leaning more toward the sciences, Wilbekaitis looks to become a nurse anesthetist and Rorke wants to enter a pre-med curriculum in college. Rorke's older sister, Grace, a former SCH soccer player, is just finishing her sophomore season at Dartmouth.

The Blue Devils are pleased with their impressive showing within the Inter-Ac League, but they've now refocused on the PAIS tournament, which they enter as the number one seed. Seeded fifth in 2016, SCH finished as the tourney runner-up, then became champion in 2017. Coping with serious graduation losses in 2018, the Blue Devils fell in the quarterfinal round to the eventual champ, Episcopal.

After losing their first game of the 2019 season to Archbishop Ryan on an own-goal, the Blue Devils have won 17 straight.

"We want to go all the way, but we're not discounting any of the other teams," McShane said. "Maria instills in us that we have to come out hard every single game."

Rorke summed up, "All season long our mindset has been 'Don't stop.'"