For the girls of Springside Chestnut Hill Academy, a 1-1 tie at Episcopal Academy on Oct. 25 meant that their fate was in their own hands in their quest to retain the Inter-Ac League soccer championship. 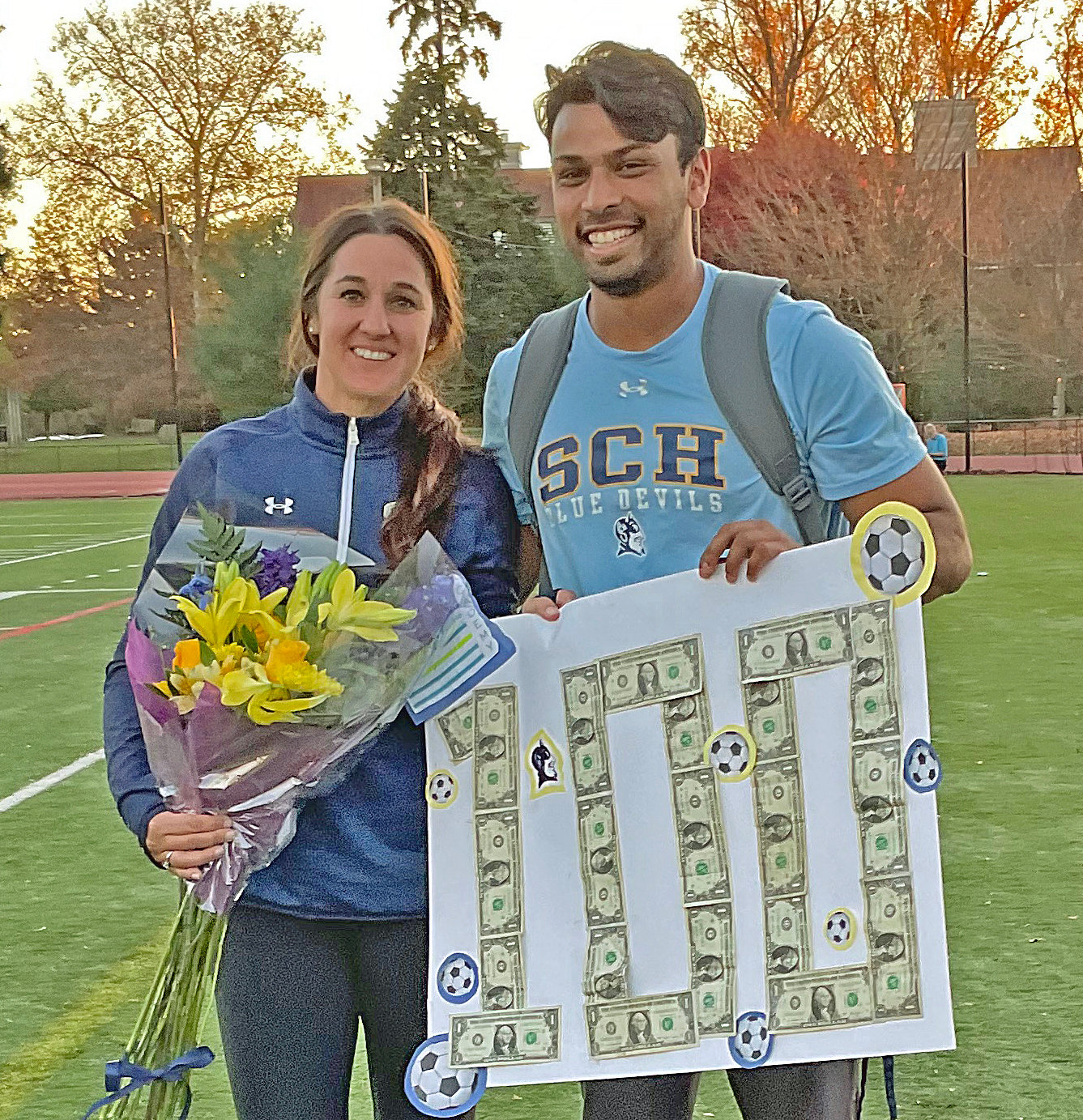 Nearing the end of her seventh season as SCH head coach, Maria Kosmin celebrates her 100th victory at the school last Thursday along with assistant coach Namit Deshpande.
Photo by Tom Utescher 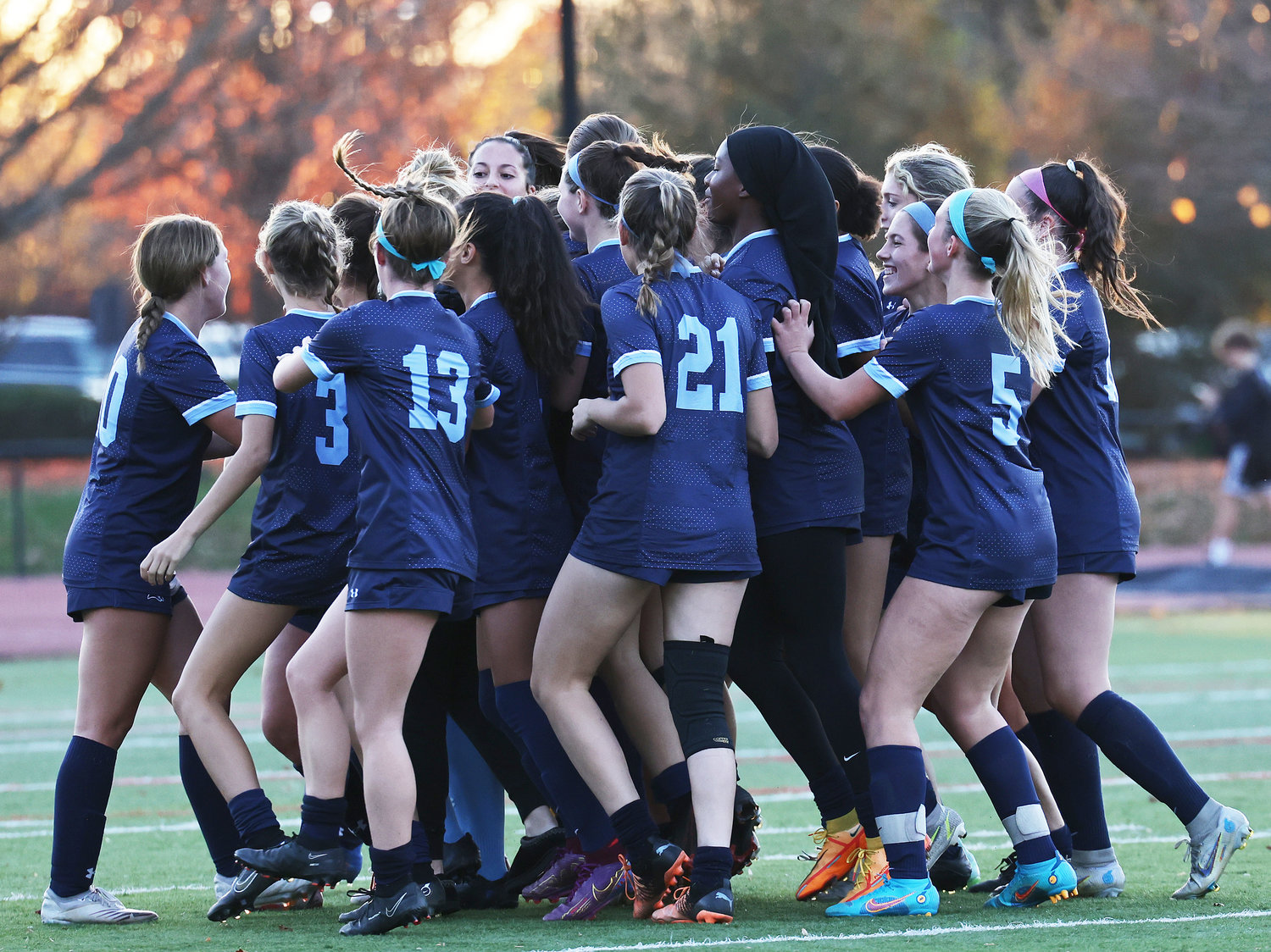 In the waning daylight, SCH players draw together in a vortex of victory after the final horn signaled their Inter-Ac championship last Thursday.
Photo by Tom Utescher
Previous Next
Posted Wednesday, November 9, 2022 12:00 am
by Tom Utescher

For the girls of Springside Chestnut Hill Academy, a 1-1 tie at Episcopal Academy on Oct. 25 meant that their fate was in their own hands in their quest to retain the Inter-Ac League soccer championship.

The draw with second-place EA meant that the league-leading SCH Blue Devils just needed to win their last two Inter-Ac games to keep the title, no matter what any other teams did. Both contests would be played on their home field.

On Oct. 28, the Devils got a step closer to their goal when they overpowered visiting Baldwin School, 5-1. They had almost a week to prepare for last Thursday's Inter-Ac finale against the Academy of Notre Dame.

Senior Bella Brown, who would score two of the Blue Devils' goals and assist on a third in her team's 3-0 victory over the Irish, said "For the seniors it was our last Inter-Ac game, so it was very important to us."

The Devils didn't engage in any superstitious acts or pre-game rituals in the early part of last week, they just practiced hard and kept their focus. They knew that if they played their game, it would be enough.

Brown observed, "I think the pressure of these kinds of games gets our coach, Maria [Kosmin], more anxious than the players."

SCH was attacking into the glaring sun in the first half, so Brown's goal 16 minutes before halftime was a big deal. The Irish did not score in the opening period, and after halftime they would have a sun that was even lower in the sky right in their eyes.

Early in the second half, SCH picked up an important insurance goal when a corner kick by Brown was headed in by junior Abby Udowenko. Before the middle of the period, Brown scored again herself to complete a 3-0 title-clinching victory for the Blue Devils. As usual, senior Ellie Stratz and sophomore Gracyn Lee-Torchiana split halves in goal, securing the shutout.

With the victory, SCH finished the Inter-Ac campaign with a record of 10-0-2 (the other tie came against Agnes Irwin when SCH was shorthanded). It was the third straight league championship for the Blue Devils.

In 2019 and again in 2021 the team rampaged through the league at 12-0. There was no official champion curing the COVID season of 2020; SCH won all of the five games it got to play. In all, this year's senior class can boast a combined record of 39-0-2 in the competitive Inter-Ac. Thursday's outcome marked the 100th career victory for seventh-year SCH head coach Maria Kosmin. Earlier in the week, it was learned that she would be one of the two coaches for the girls' East Team at the 2022 High School All-American Game, which will be played on December 10 in Panama City Beach, FL.

She will be joined by one of her own Springside players on the East Team, senior striker Lisa McIntyre. Already a varsity player at SCH as an eighth-grader, McIntyre was the Inter-Ac MVP in 2021 and will sign with the University of Maryland.

Springside made the initial attacks in Thursday's match. Just a few minutes in, the ball was crossed into the middle of the box. A shot by junior Abby Udowenko was blocked and a second shot was saved by Notre Dame's sophomore goalie Sophia Hall. The Irish keeper had limited the Devils to a single goal in the two previous meetings of the teams.

"Coach Maria and Coach Namit [Deshpande, the SCH assistant coach] were both saying that we shouldn't take too many shots on her from outside the 18," Brown noted. "We needed to look more for possession and combinations inside the box."

On every SCH offensive restart, the coaches yelled "Anywhere but to the goalie!"

Five minutes in, Notre Dame made a charge up the left wing and angled in to fire a ball that was pocketed by SCH's Stratz at the left post. In the early stage of the game, the defense for the Blue Devils seemed surprised when the Irish made some strong offensive rushes.

Obviously, the Irish knew it was particularly important to press for a goal in the first half while the sun was at their backs. It also should be remembered that Notre Dame has its own representative on the All-American East Team. Audrey Cain, who'll sign with Rutgers, is a back who often initiates Notre Dame's offensive transition and who plays alongside many of the Blue Devil girls in the FC Bucks club program.

As it turned out, Stratz was able to keep a clean sheet throughout the first half. At the other end with about 15 minutes gone, McIntyre brought the ball toward the left post and sent it laterally across the face of the goal, past the advancing Hall. The ball had some pace on it, though, and by the time McIntyre ran it down beyond the right post she faced an extreme angle for a shot. The ball went out off of Hall, and the Devils didn't get a shot on the resulting corner kick sequence.

When McIntyre invaded again along the flank awhile later, she had Brown with her on the run, and when she crossed the ball Brown scored what proved to be the game-winner with 16:49 remaining in the half. Soon after that senior Abby Kenkelen had a strong shot travel a little wide to the left, and later a serve into the box led to a header by senior Mary Trudeau over toward the left side of the AND goal. None of the Devils were able to take advantage of this opportunity, however.

After a long Notre Dame free kick from the center of the field bounced straight to Stratz in the final minute, the half ended at 1-0.

"At halftime," Brown related, "Coach Maria said we were playing well, but we needed to score one more goal. When we had chances, we needed to finish, because we couldn't afford to tie or lose this game [either option would have given Episcopal a chance to win the league]."

On a Blue Devils corner five minutes into the second stanza, they did not immediately get a shot, but they kept the ball in the attacking third. McIntyre eventually angled a shot from the left that was saved at the near post.

A few minutes later, another SCH corner yielded results. Brown sent the ball in from the right side, and it sailed most of the way across the goalmouth before Udowenko headed it into the next. The Devils now had a goal to spare with 33:17 remaining in the game.

Five minutes later, Brown had a very near miss with a shot near the left side of the Irish cage. Attacking on the other side of the box not long after that, Brown put the ball away from near the right post, and the 3-0 final was on the board with 26:37 left on the clock.

Notre Dame's most serious bid to snap the shutout came with about 17 minutes to go. The Irish took the ball down near the left endline and hit a strong shot across, but Lee-Torchiana was on her line and scooped up the ball. Near the end, the visitors had another chance on a corner kick from the left. Senior Amanda McNesby cleared the ball out of the box for SCH and soon the celebration was underway.

Four of the Blue Devils seniors will be going on to play NCAA Division I college soccer; McIntyre at Maryland, Brown at the University of Binghamton, Trudeau at Morehead State in Kentucky, and Julia Thomson at the University of Illinois Chicago. Others are eying nearby Division II Chestnut Hill College, where two 2022 SCH grads are already starting. Brown said she and the others are already looking to make upgrades to their game to adjust to collegiate play.

"I've been trying to work more on my left foot," she elaborated, "because playing on the wing there are a lot of times when I'll need to cross the ball or shoot with my left. Also, I'm just trying to increase my speed of play when I'm dribbling out of the midfield or from the wing. Being able to dribble with speed to get past defenders will help me in college."