This fall, they firmly believed they had what it would take to win both the Inter-Ac title and the PAIS championship. They were right. 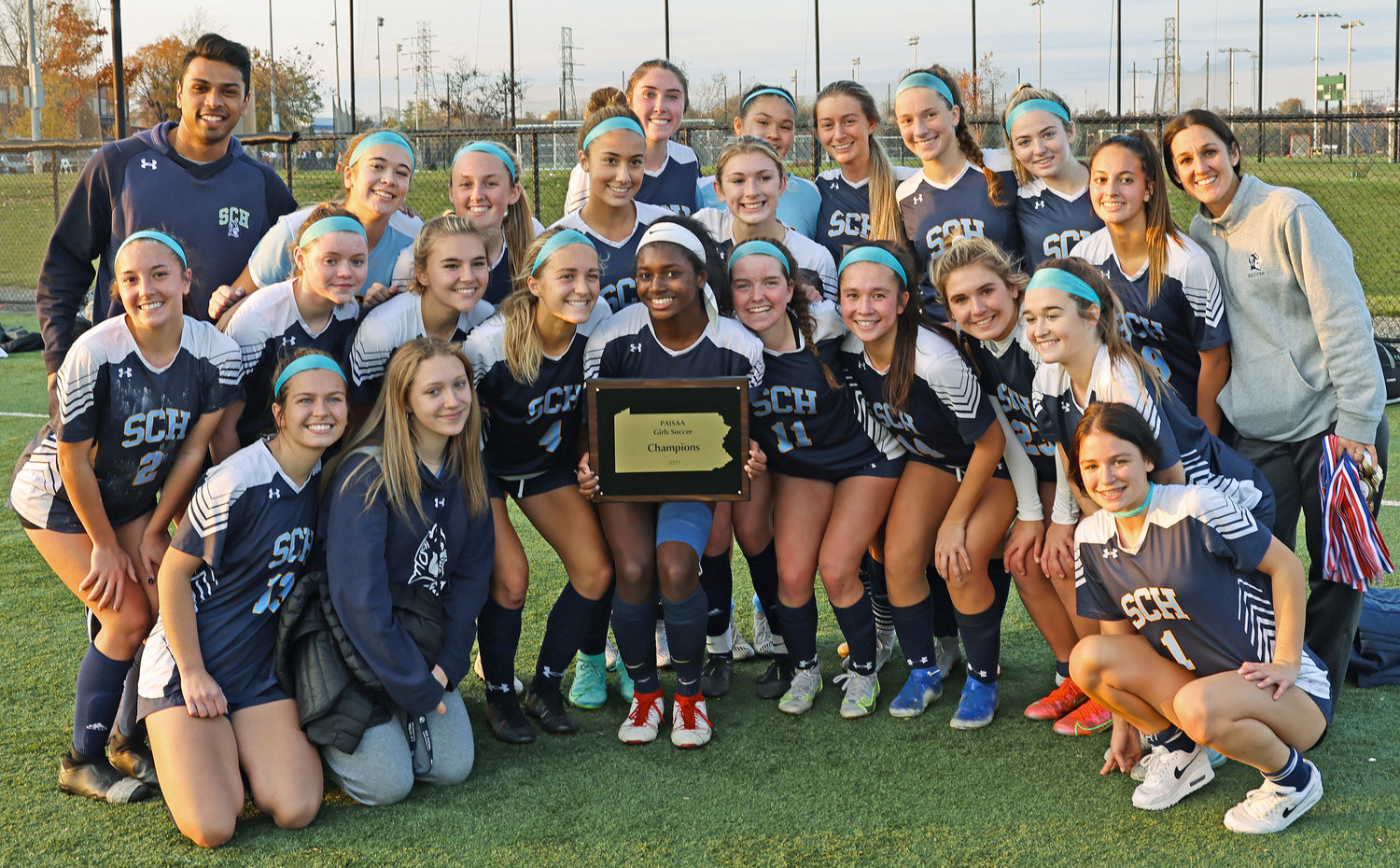 The Springside Chestnut Hill Academy team poses with the plaque they earned when they became the 2021 Pennsylvania Independent Schools champions.
Tom Utescher
Posted Monday, November 22, 2021 6:10 am
by Tom Utescher

On social media at the start of the 2021 soccer season, the girls of Springside Chestnut Hill Academy began to use the hashtag "On A Mission." In their last full season of competition in 2019, the Blue Devils had gone undefeated in the Inter-Ac League to win the league championship, but then they had ended their season with a loss in the semifinals of the Pennsylvania Independent Schools tournament.

This fall, they firmly believed they had what it would take to win both the Inter-Ac title and the PAIS championship. They were right.

Last Wednesday afternoon at The Proving Grounds outside of Conshohocken, SCH justified its number one seed in the 2021 PAIS tournament by winning the championship game, 1-0, over the Academy of Notre Dame. In the first half, junior striker Lisa McIntyre scored the lone goal of the afternoon against the Irish, who had been seeded second for the tourney. Springside Chestnut Hill finished the season with an overall record of 18-0-1, with the tie coming in the middle of the season in a non-league match at Pennington School.

The four teams that reached the Independent Schools tournament semifinals were all members of the Inter-Ac League, and Springside Chestnut Hill had beaten the other three twice during the regular season. There's a lot of truth in the old adage that it's very difficult for one team to defeat another three times in a given season.

Episcopal Academy had kept creeping closer to the Devils during the fall campaign. SCH won the first regular-season meeting at 3-1, and the score of the rematch was 1-0. The Blue Devils got ahead of fourth-seeded EA by a 3-0 count in the PAIS semifinals, then had to survive a late push by the Churchwomen to prevail, 3-2.

Notre Dame, which had eliminated sixth-ranked Baldwin School, 2-0, in the PAIS semifinals, had lost both regular-season encounters with the Blue Devils by a score of 3-0. The Irish were able to keep last Wednesday's third match with SCH much closer.

"They're very organized, and they know our players and how to play us," commented SCH head coach Maria Kosmin. "They played an awesome game."

After Springside collected the only goal of the afternoon little more than midway through the first half, the Blue Devils had more chances to add an insurance goal that Notre Dame did to tie the bout.

While complimenting AND freshman goalie Sophia Hall for her strong performance, Coach Kosmin uttered some heartfelt praise for her own keeper, Ellie Stratz. The SCH junior did not have to answer the call as many times as her counterpart, but in a 1-0 affair she made important saves several times, particularly with her stop on a beautiful Notre Dame free kick with under nine minutes to go.

"Ellie gets underrated a lot because we have such a strong defense and she doesn't usually face a lot of shots," Kosmin pointed out. "Today Ellie came up big when we needed her to. If she didn't, the whole game would've changed."

In the early stages of last Wednesday's final, occasional attacks by Notre Dame occurred between longer periods of possession by SCH. In the two regular-season contests between the teams, the halftime scores had been 0-0 and 1-0, and once again, goals did not come easily in the first half.

A little over two minutes in, the Blue Devils crossed the ball inside from the left and had a shot by junior Bella Brown saved by Notre Dame's Hall. On corner kick from the left taken by senior Maya McDermott, the ball traveled through the box without any SCH players making contact.

Senior Virginia Perry sent a shot outside the right post of the Irish goal, and following another SCH corner kick, Brown struck the crossbar with a shot.

Later on, in transition on offense, Springside got the ball to junior

Lisa McIntyre about a dozen yards above the 18 in the middle of the field. She dribbled diagonally to the top of the box on the right, then sent a shot across into the top left corner. The eventual game-winner had gone in with 17:47 to go before halftime.

The 1-0 count would hold up for the rest of the half, and indeed, for the rest of the game. Two promising attacks by the Blue Devils early in the second period both ended with shots that went directly to AND's Hall. Around 10 minutes in, an Irish corner kick from the left found a head inside the box, but the ball went straight up in the air instead of toward the goal, and SCH's Stratz grabbed it when it came down.

At the other end, a lead pass intended for McDermott was a little strong, and Hall came out of the Notre Dame cage to beat her to the ball. On a free kick for the Devils, a header in the box was off-target. With under 20 minutes left, the Irish also generated an errant head ball off of a restart, this one on a corner kick.

Sophomore Abby Udowenko subbed into the game for SCH and became a force in transition along the left wing. She made a nice move past a Notre Dame back heading into the left side of the box, but another defender delayed her while Hall scooped up the ball. The 10th-grader would pose other threats later on.

Kosmin remarked, "Abby stepped up big for us, and we got some good minutes in the back from Alex Reilly, another sophomore. When they go in, they help change the pace of the game. Our younger players make me look forward to the future."

As the clock dropped to the 10-minute mark, an SCH corner kick from the right bore no fruit, and an outside shot by junior Mary Trudeau was saved by Hall.

With under nine minutes to go the Blue Devils got a big scare at the other end of the field. The Irish were awarded a free kick 10-yards above the box, and junior Audrey Cain drove the ball hard toward the top left corner of the SCH cage. Stratz had it covered, though, leaping to bat the ball away as her teammates cheered.

Just a little later, another Notre Dame restart brought about a shot over the Springside Chestnut Hill goal, but after that the Blue Devils pushed up on offense and stayed there for most of the remaining minutes.

A shot by Brown went out off a Notre Dame back for a corner, and when senior Lauren Sullivan put the ball in play a header by Perry was saved by Hall for the Irish. McIntyre brought the ball along the right wing and crossed it, but a Springside shot from the box went wide right.

Although repeated attacks by the Blue Devils did not yield the much-desired insurance goal, they kept the Irish offense idle as the clock ticked down to the final whistle.

Despite some dicey situations, after the match Kosmin said, "I knew that our girls have enough talent and competitiveness that if they came out and just did what we've been doing all year, they would come away with the win. I'm glad they did because they deserved it. The main thing was to not focus too much on the craziness that surrounds a game like this."

The Blue Devils' coach has a talent-rich class of 13 juniors returning along with skilled younger players, but she'll miss this year's seniors;

"They got people to follow them with the leadership they showed in every practice and every game," she said. "They were a big part of the culture; when they got on the field and turned it on, everybody else followed. They knew from experience what it was like to not be in this game, and they made it their goal to get here as seniors and win."