In the first half of the November 11 PA Independent Schools soccer tournament semifinal, the girls of top-seeded Springside Chestnut Hill Academy appeared to have the game well in hand. 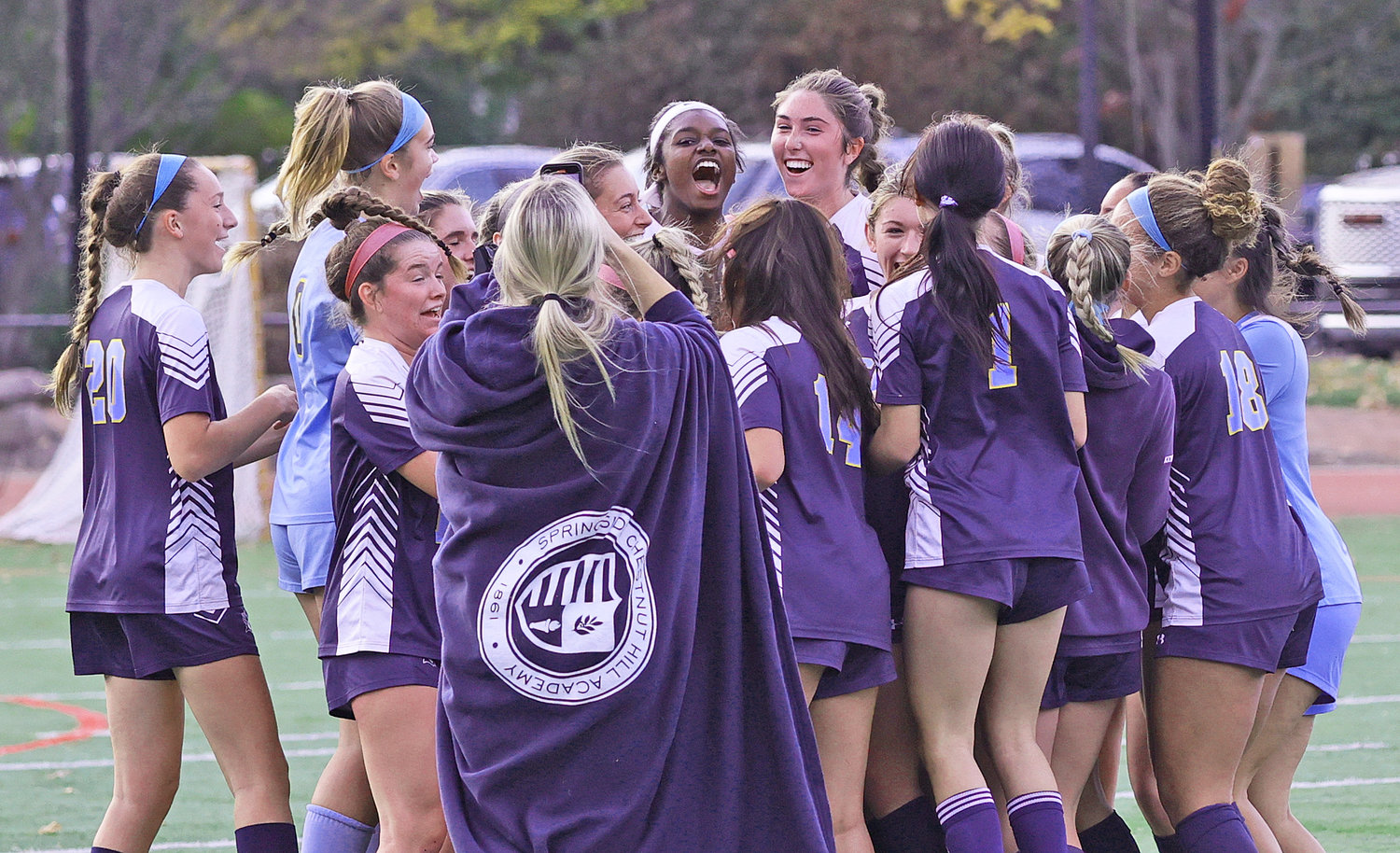 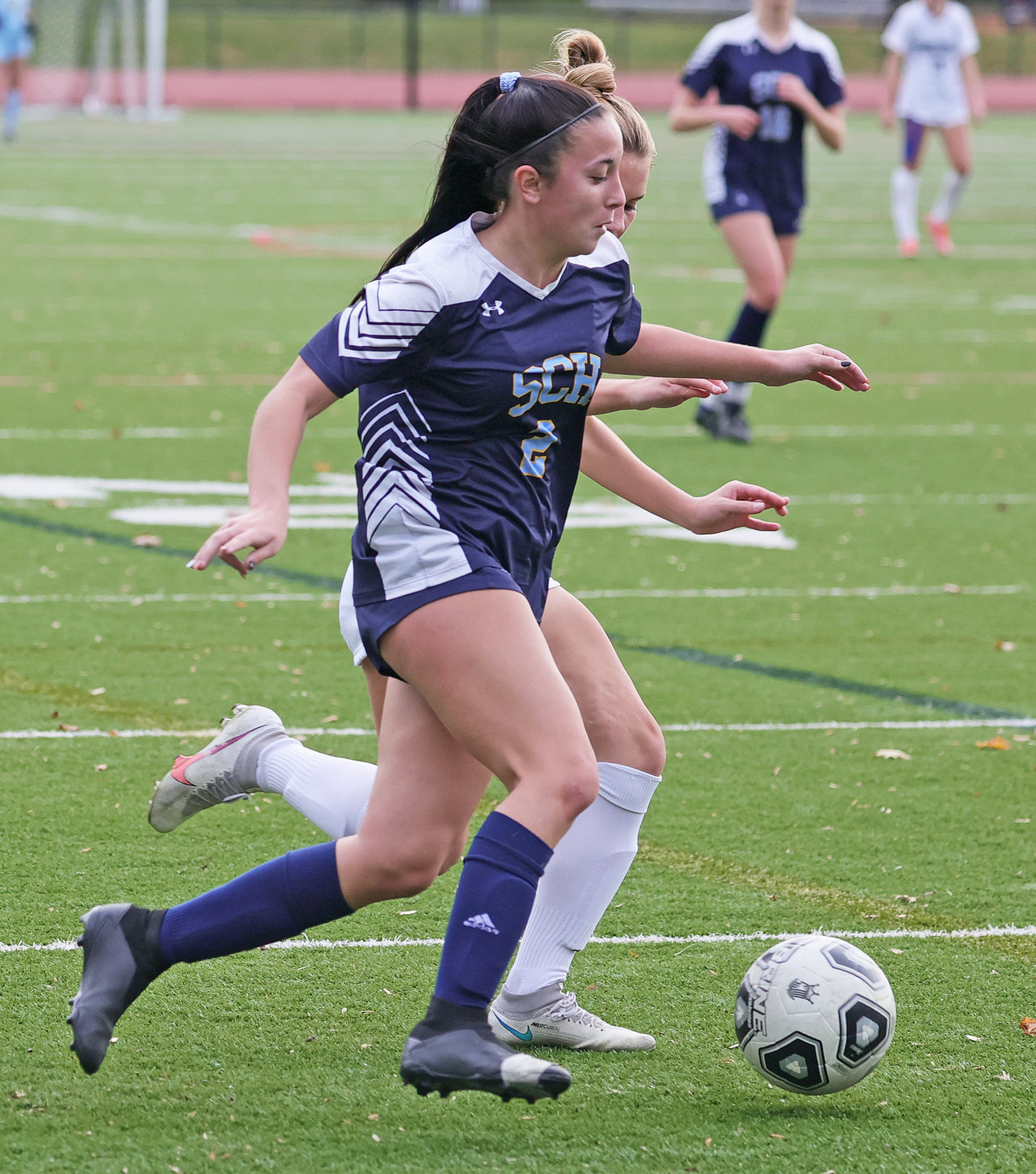 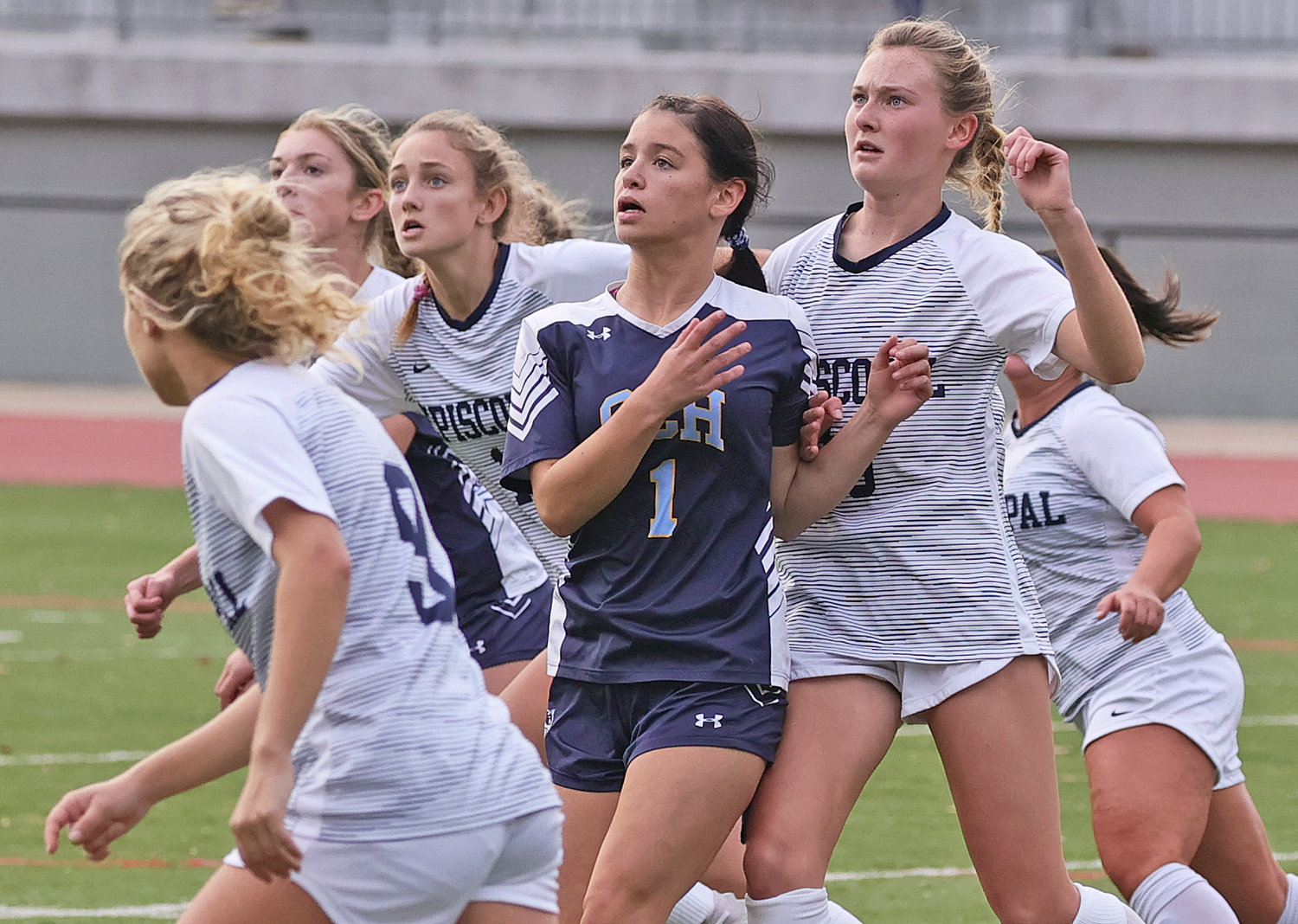 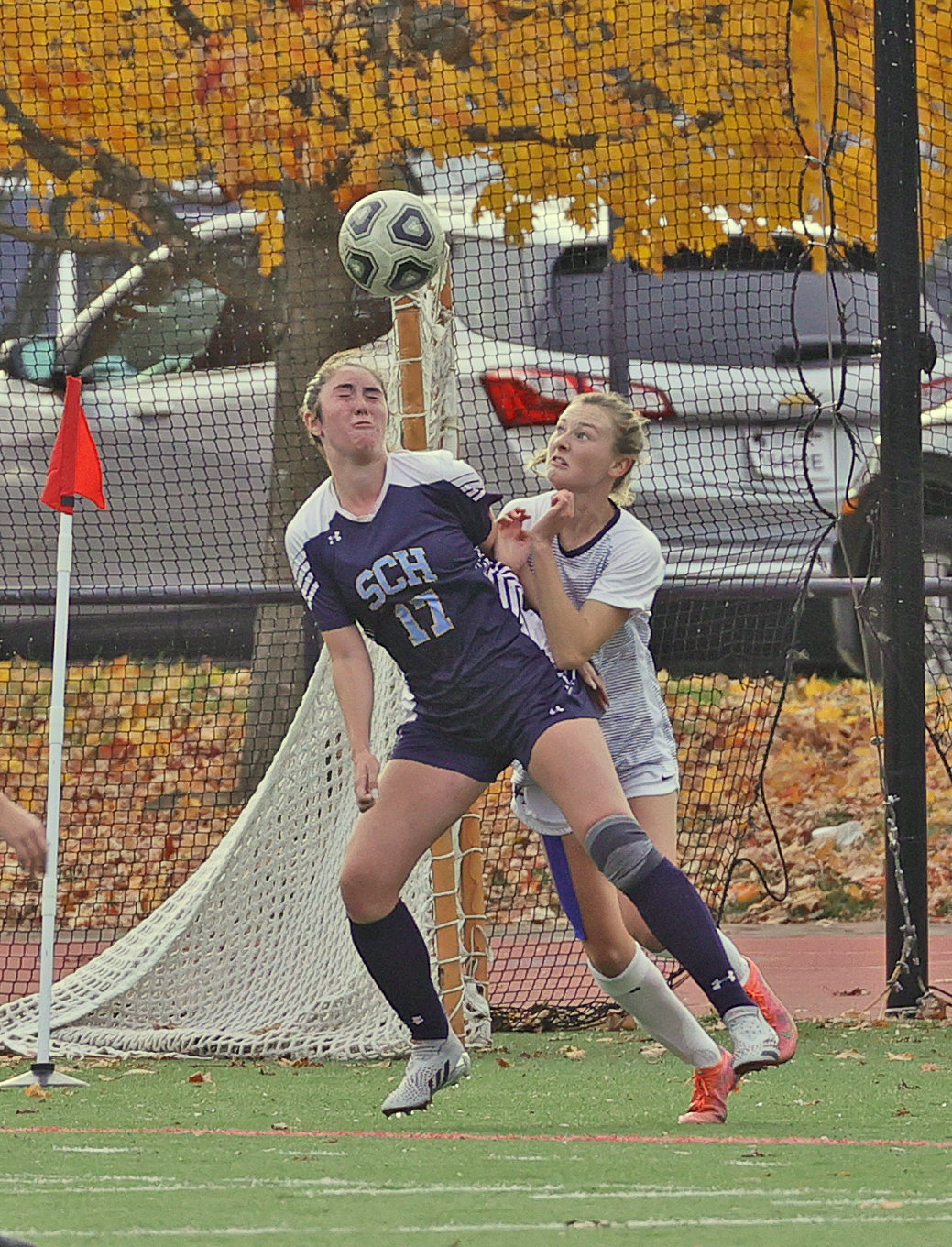 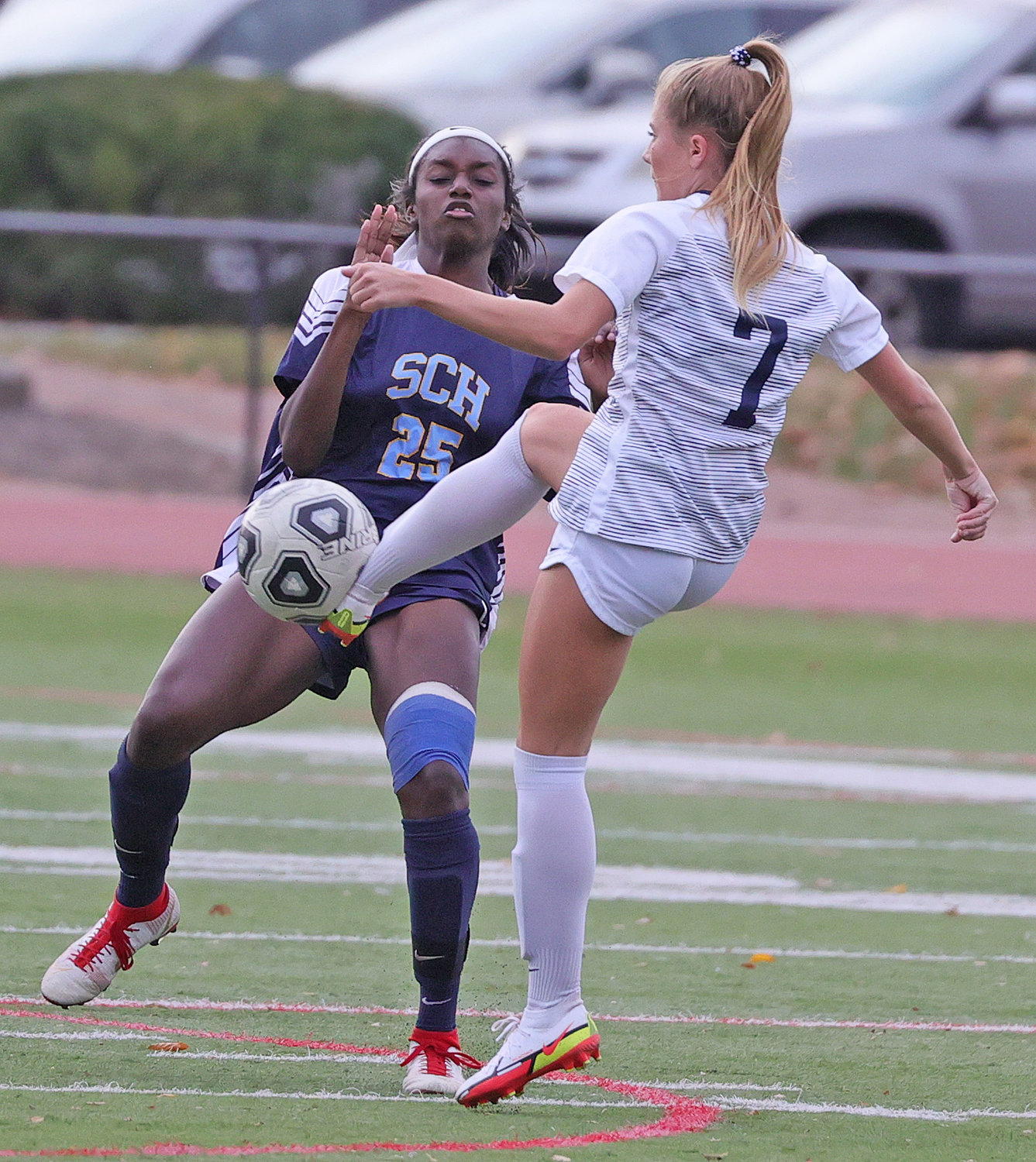 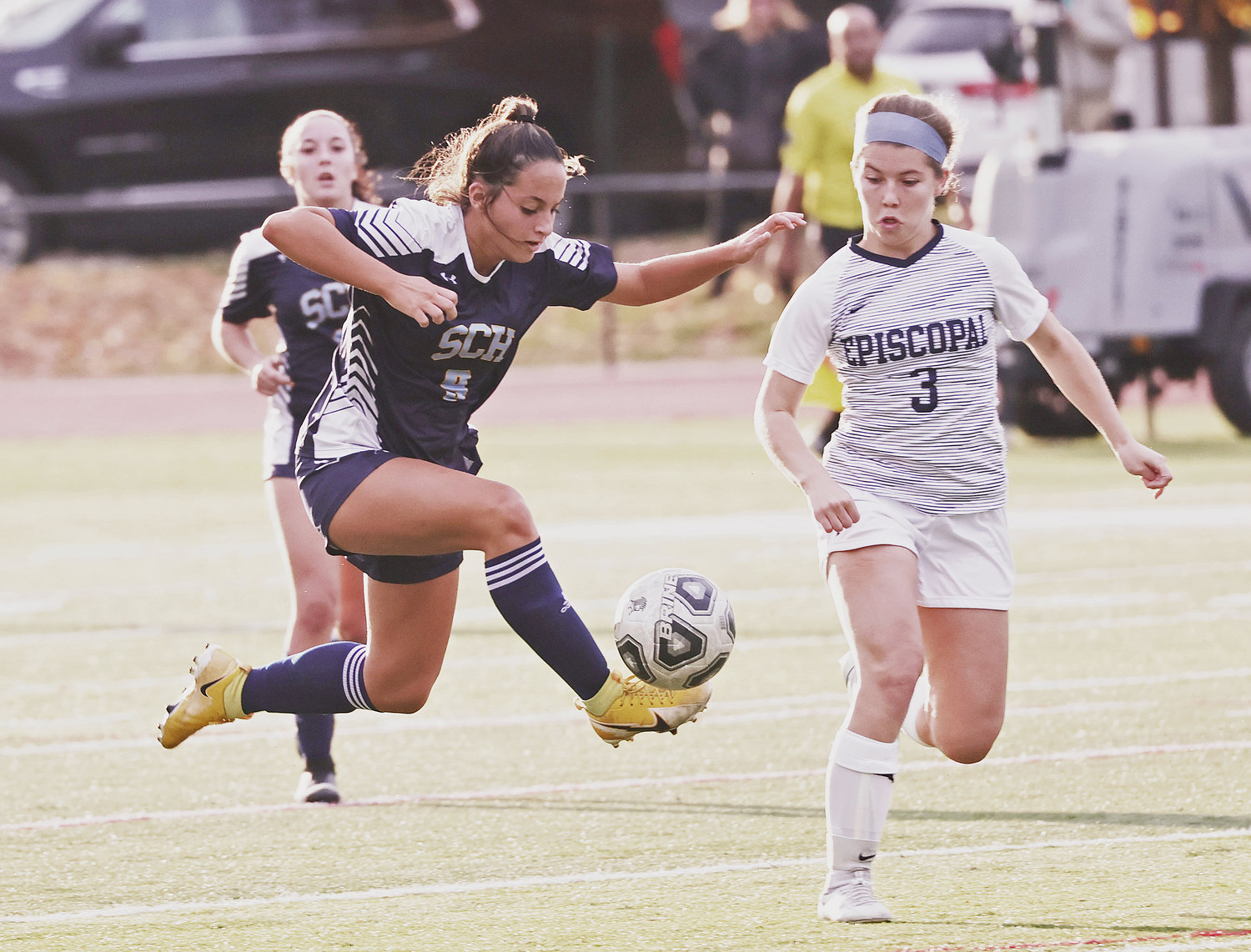 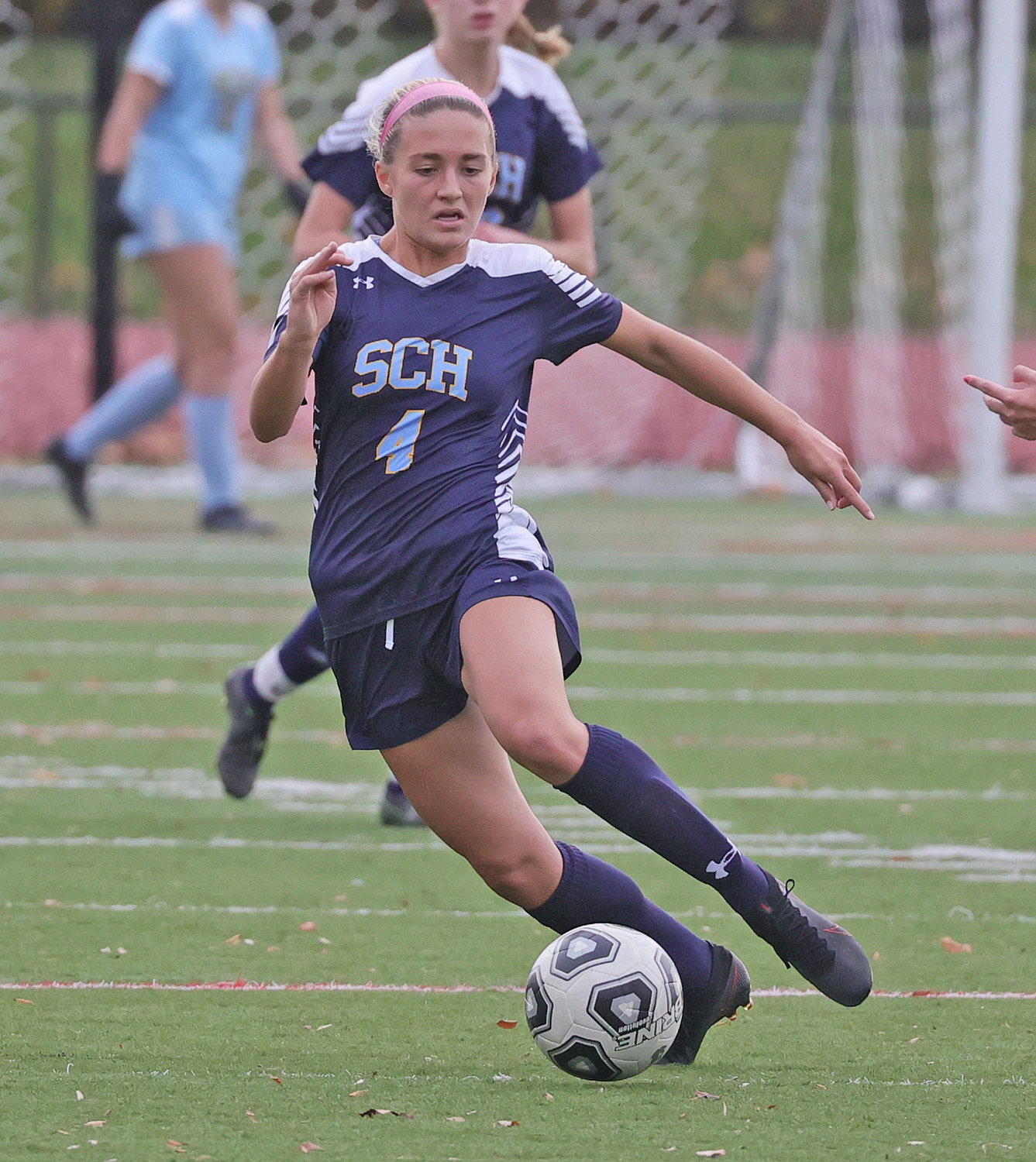 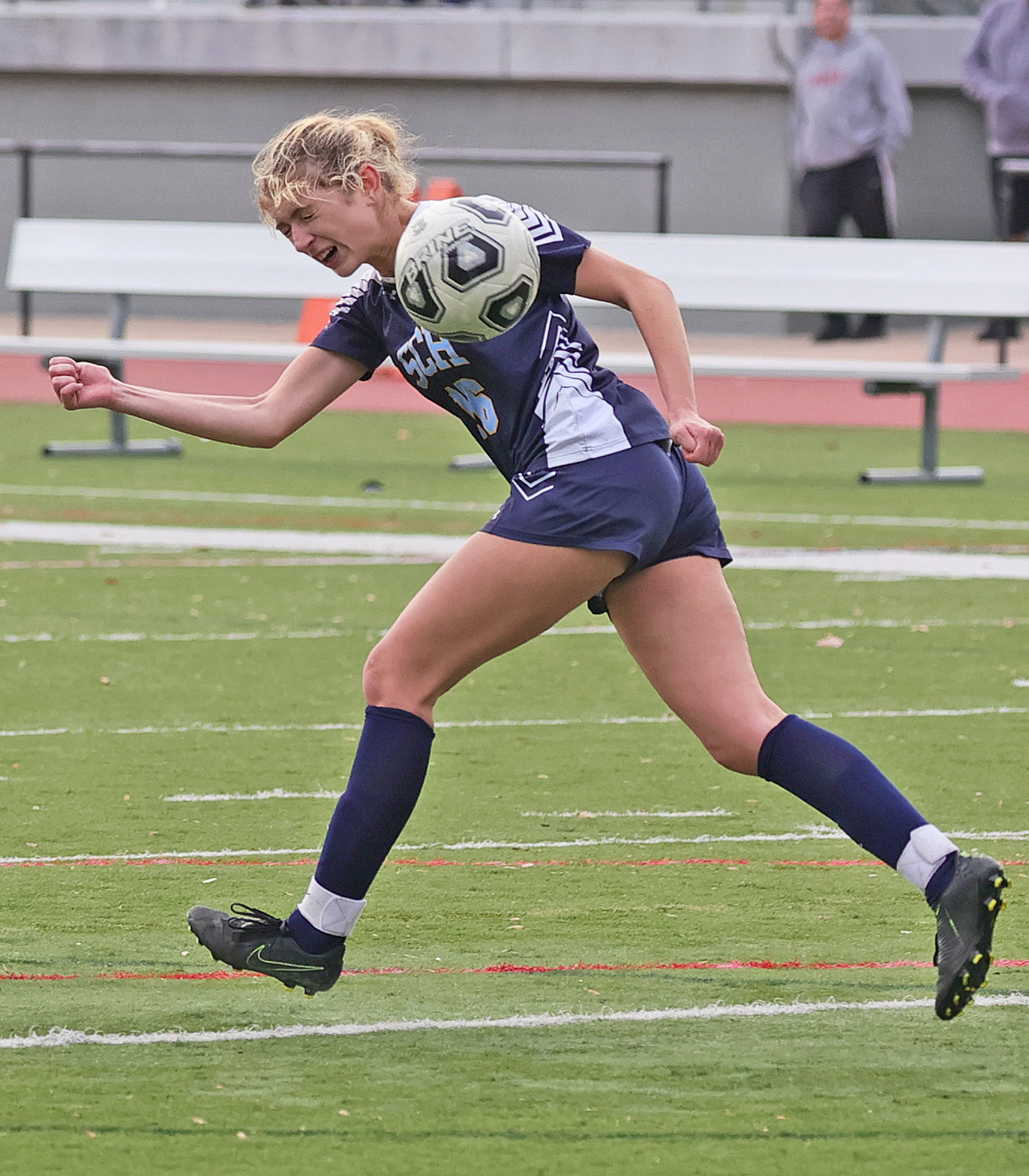 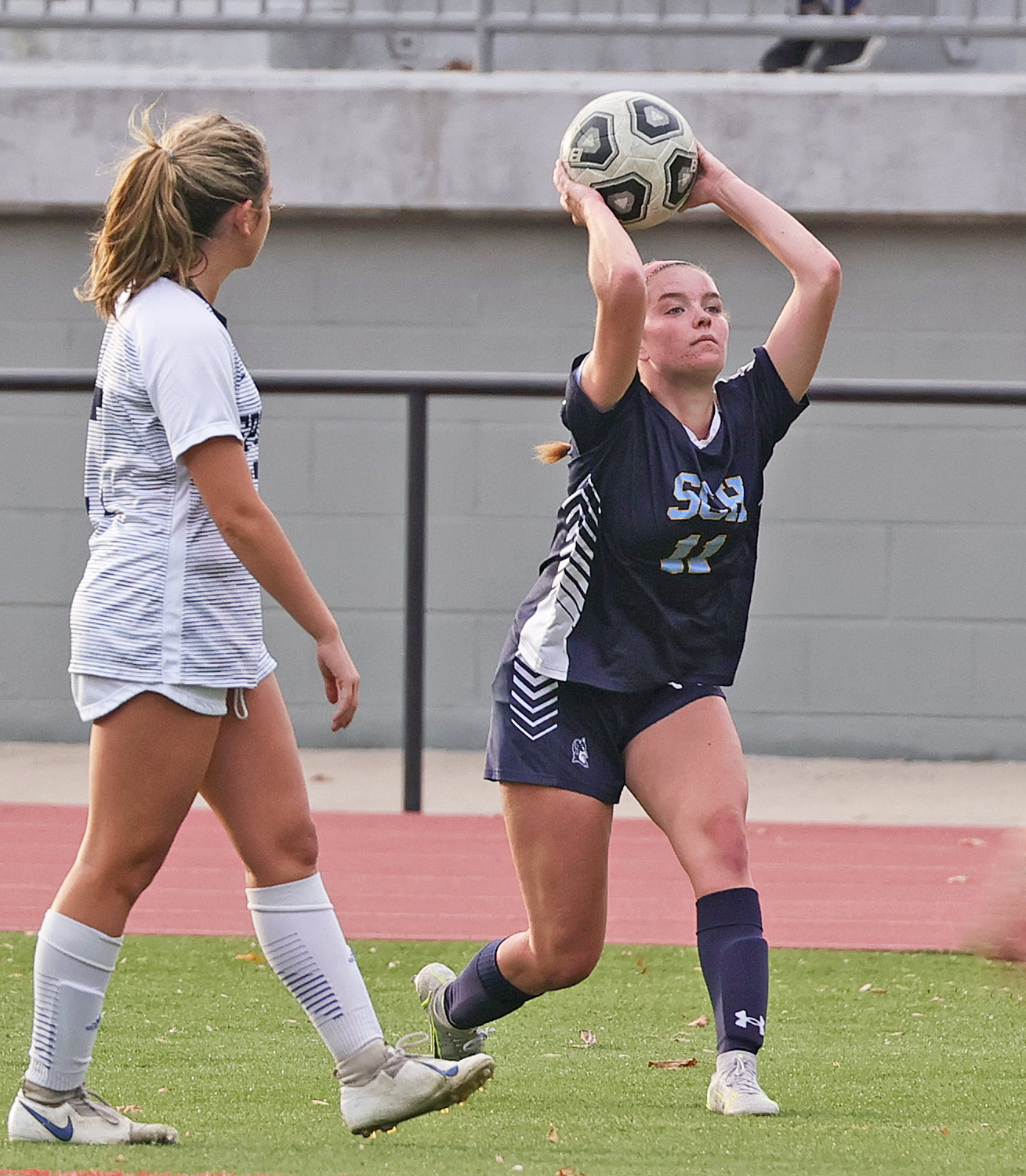 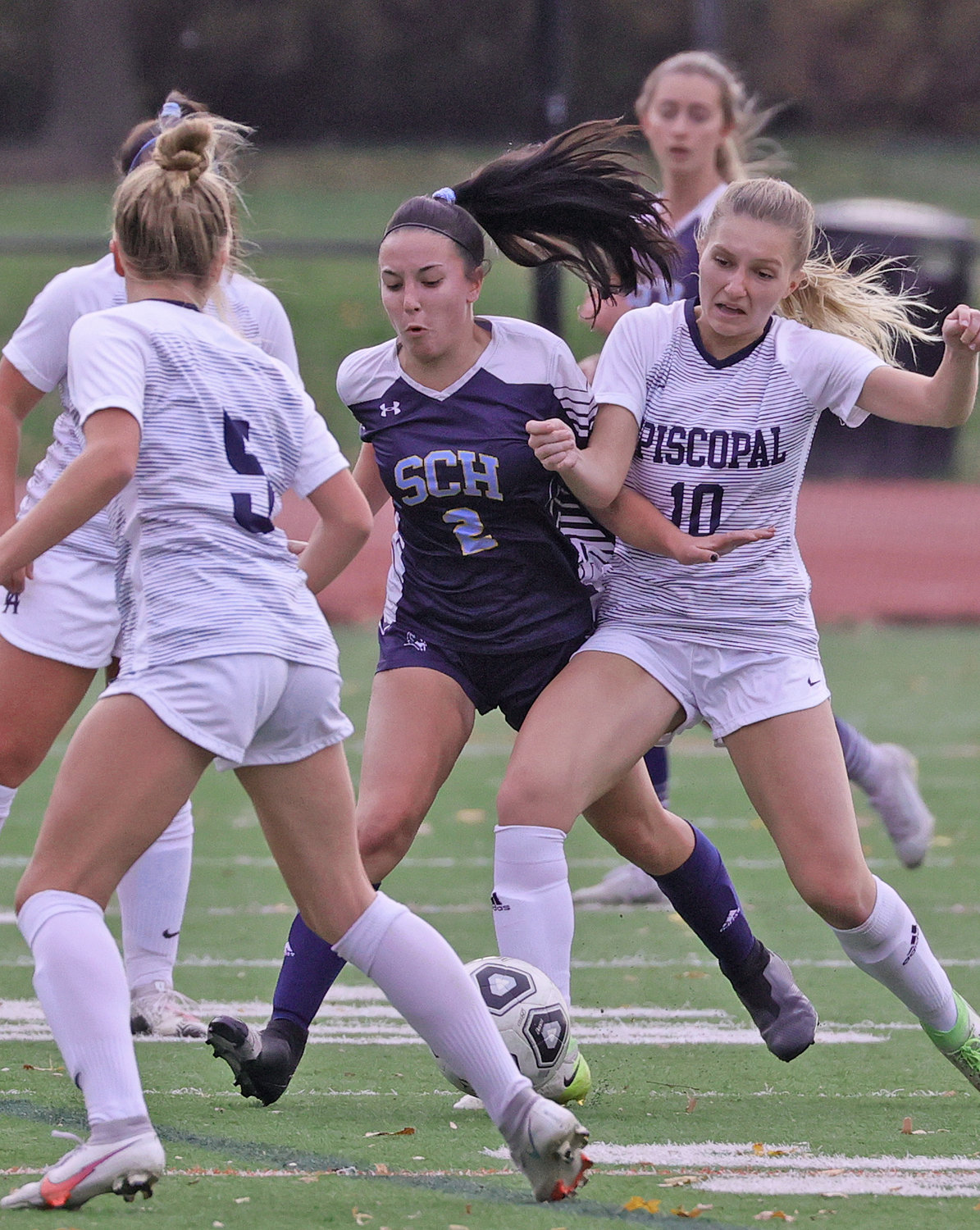 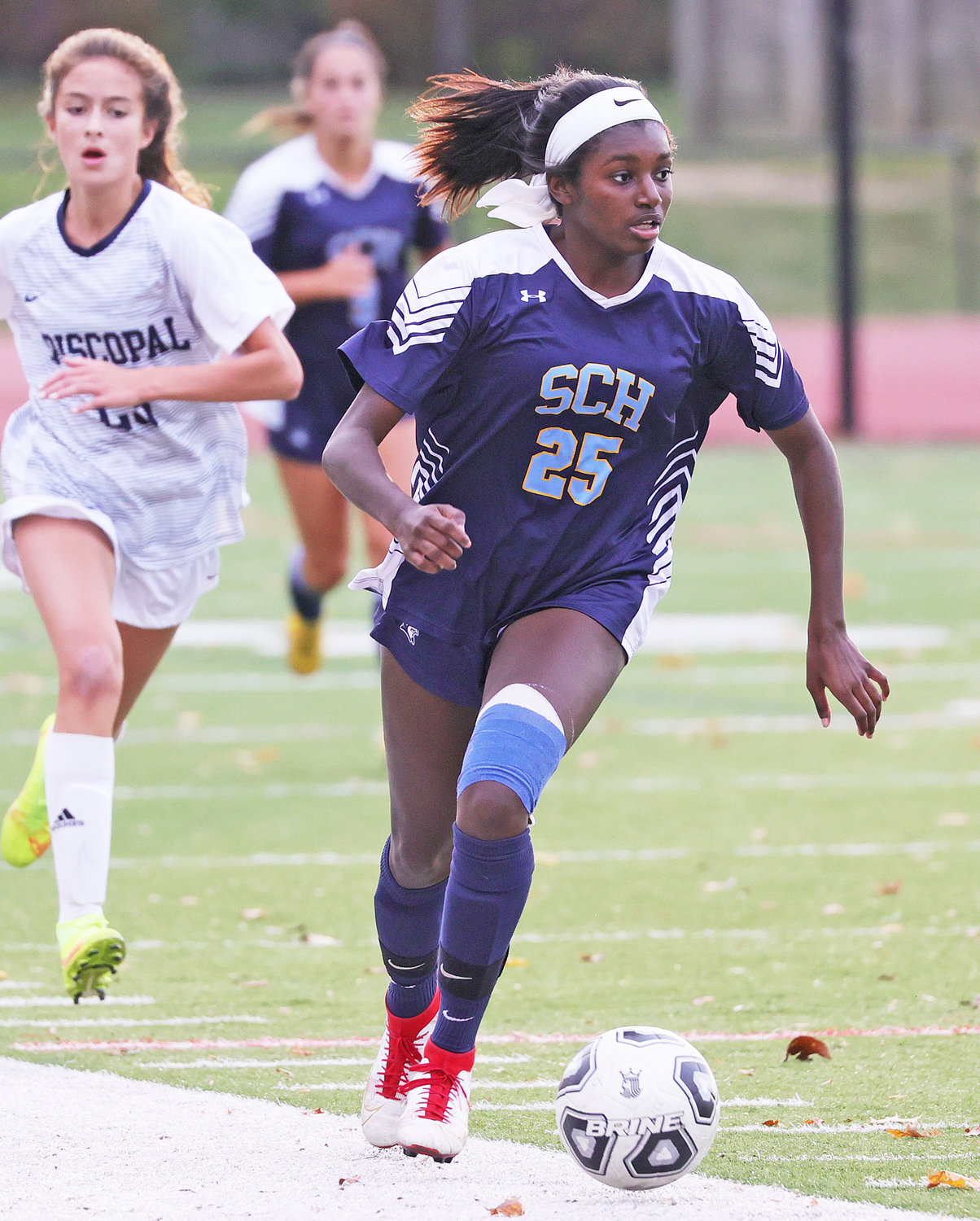 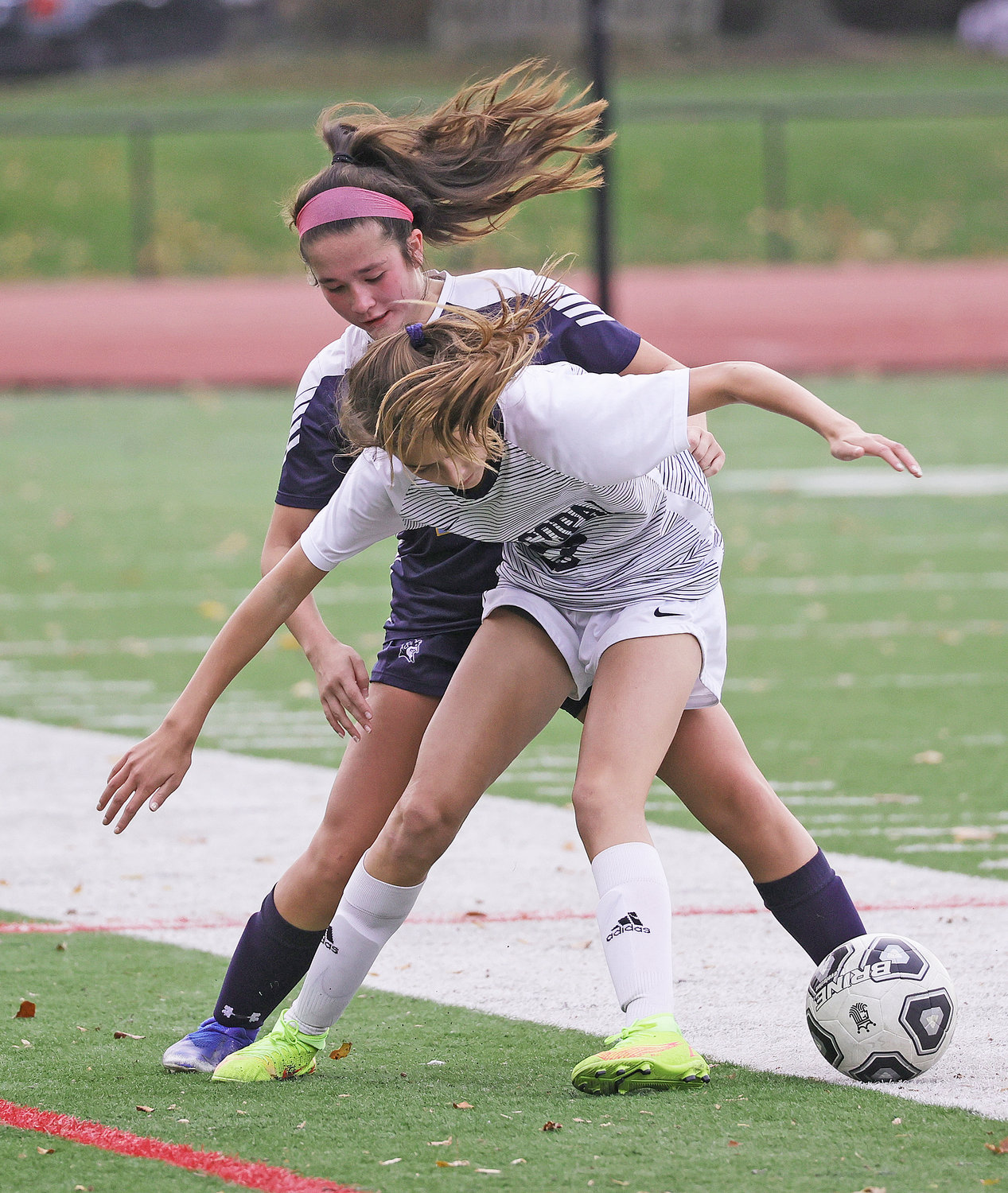 In the first half of the November 11 PA Independent Schools soccer tournament semifinal, the girls of top-seeded Springside Chestnut Hill Academy appeared to have the game well in hand. Hosting the match at Maguire Stadium, the Blue Devils took a 3-0 lead over visiting Episcopal Academy, the fourth seed for the tournament.

The Churchwomen put in a goal before halftime, though, and things really got dicey when EA scored again with under seven minutes left in the game to make it a one-goal affair. SCH was unable to secure an insurance goal, but it did control most of the action the rest of the way to chalk up a 3-2 win.

Still undefeated at 17-0-1, the Blue Devils will play in the PAIS championship game this Wednesday, November 17, at 2:30 PM at The Proving Grounds in Conshohocken. Two other Inter-Ac League schools played in the other tournament semifinal last Friday, with the second seed, The Academy of Notre Dame, defeating sixth-seeded Baldwin School, 2-0.

During the regular season, Springside Chestnut Hill had overcome each of the other Inter-Ac schools twice, winning the league title with a 12-0 record.

At the end of September SCH had beaten Episcopal by a score of 3-1, but the October rematch was closer, with the Blue Devils prevailing, 1-0.

Throughout the season, Springside has proved to be something of a slow starter, generating most of its goals after halftime. Last Thursday, they were determined to assert themselves earlier in the game.

Junior Lisa McIntyre, one of the Devils' top scoring threats, revealed, "The whole day we were thinking that this would be our toughest game and that we had to win it to go to the state final. During warm-ups we brought a different type of energy. We did a karaoke and a dance party in the middle with our coaches, which is something that we hadn't done before."

When the action commenced the Blue Devils got on the board quickly, with junior Bella Brown assisting on a marker by senior Lauren Sullivan.

McIntyre said, "Instead of taking the ball up through the midfield, against Episcopal we wanted to attack on the outside and pressure their wing backs."

McIntyre raised the count to 2-0 with an assist from senior Maya McDermott, then she returned the favor to help set up a McDermott goal that put the hosts up 3-0.

The shutout would not last until halftime, though. Quinn Whitaker, a member of the very talented freshman class at Episcopal, got the Churchwomen on the board with what SCH coach Maria Kosmin described as "a left-footed bomb."

Through about the first 25 minutes of the second half, SCH made occasional offensive forays, but Episcopal had the ball in the other half of the field much of the time. The Churchwomen didn't get off many shots, but at times the Blue Devils appeared content to just ride their two-goal lead.

From there, though, it could take just one slip-up to see that advantage reduced to a single goal. At the end of an offensive transition, EA slipped the ball into the middle of the box for an open shot by senior Alexa Capozzoli. She put the ball in high on the right to make it 3-2 with 6:42 left to play.

The Churchwomen wouldn't get many good chances to tie the game, though, as the offensive momentum shifted to SCH going down the stretch.

"It got scary near the end," admitted McIntyre, who had left the field with a leg cramp just before the EA goal, but returned later. "Every game we have against Episcopal is always a tough one towards the end. It comes down to who wants it more and who is going to keep on fighting."

The final Inter-Ac League game of 2021

UPDATE: The final Inter-Ac League game of 2021 was played at Penn Charter on Saturday, November 13, with the host Quakers defeating Germantown Academy, 3-1. Junior Sage Battista opened the scoring for GA, but Charter answered with markers from freshman Jul Toomey and sophomore Olivia Linus to lead 2-1 at the half.

Senior Kayla Bradby completed the scoring in the second period, and the Quakers moved up into second place in the final standings with a record of 7-3-2, while the Academy of Notre Dame slipped back to third at 7-4-1. GA, which tied Baldwin School in one league contest, finished 0-11-1.