The girls on the Springside Chestnut Hill Academy soccer team continued their march through the Inter-Ac League last week, finishing out the first round of games October 12 with a 3-0 victory over previously undefeated Academy of Notre Dame, and then starting the second half of league play with another home field victory, overwhelming the Owls of Agnes Irwin School, 7-0, on Thursday afternoon, October 14. 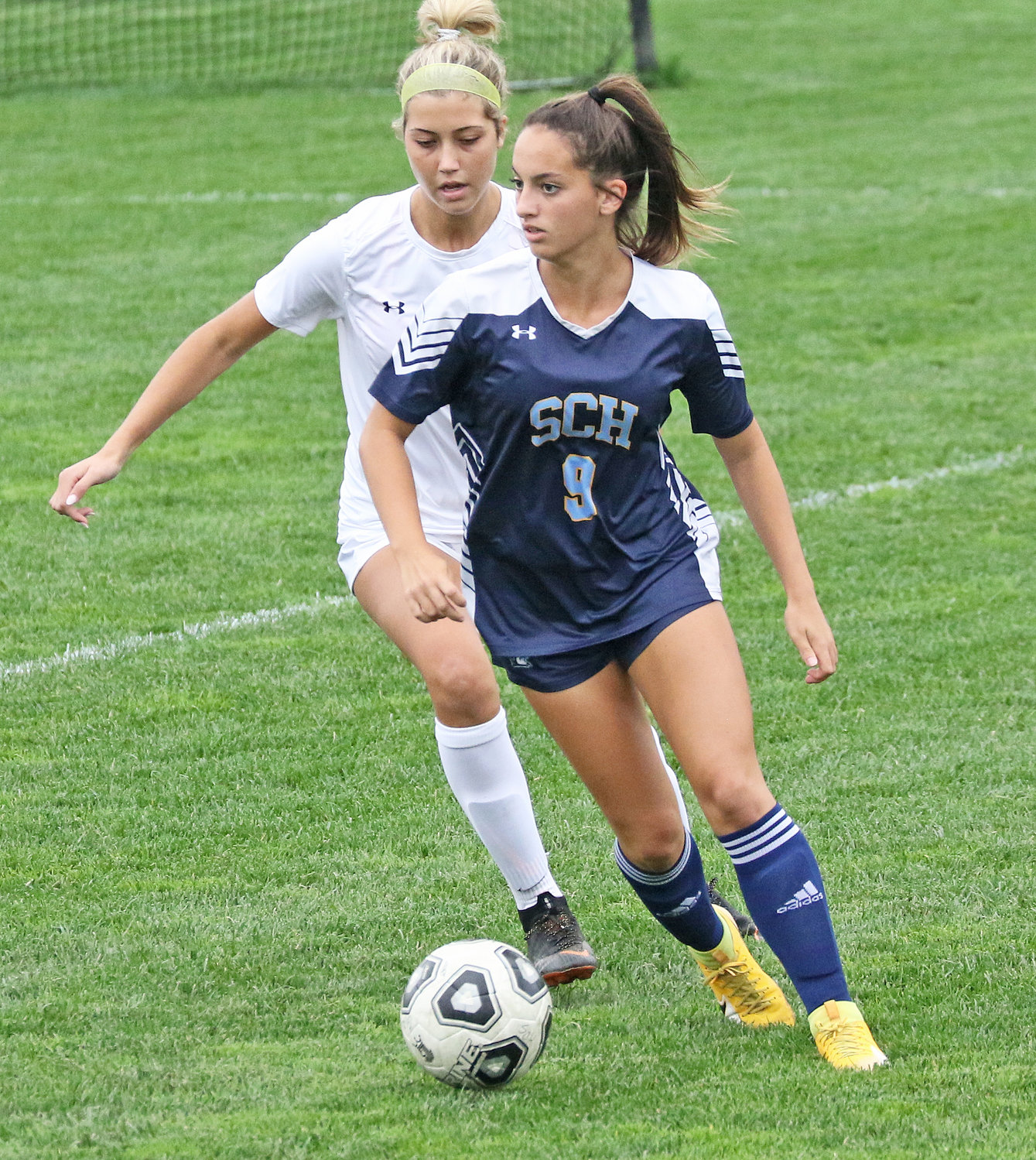 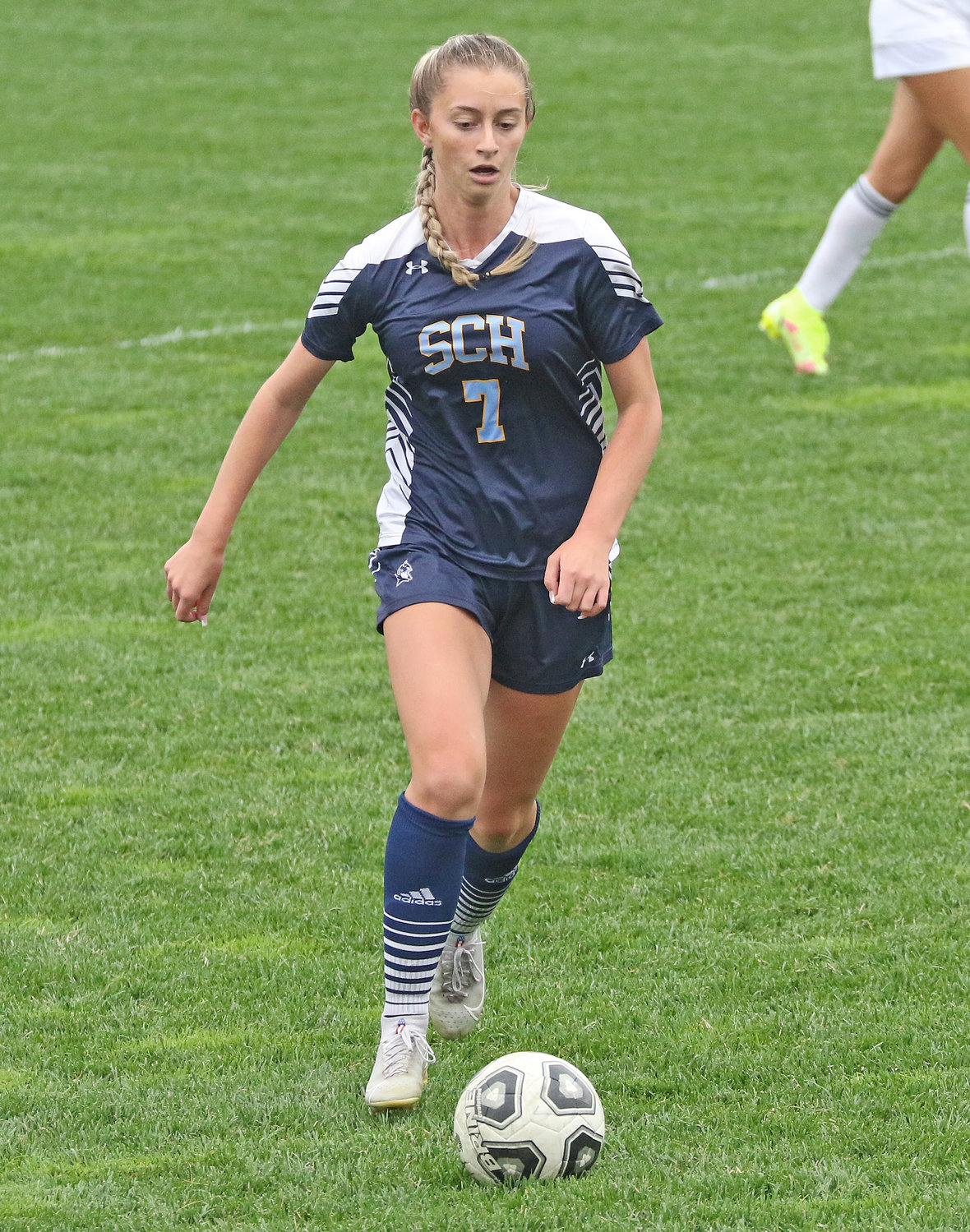 Bringing the ball up the right wing is SCH junior Abby Fitzmaurice.
Tom Utescher
Previous Next
Posted Tuesday, October 19, 2021 8:00 am
by Tom Utescher

The girls on the Springside Chestnut Hill Academy soccer team continued their march through the Inter-Ac League last week, finishing out the first round of games with Tuesday's 3-0 victory over previously undefeated Academy of Notre Dame, and then starting the second half of league play with another home field victory, overwhelming the Owls of Agnes Irwin School, 7-0, on Thursday afternoon, October 14.

The Blue Devils (11-0-1 overall) had gotten a bit of a wake-up call in a non-league bout during their trip to Pennington School in New Jersey on Saturday, October 9. Although Pennington traditionally has been a South Jersey power, its record this fall included a 2-1 loss to Germantown Academy, a team SCH had beaten 7-0 later in September. However, other outcomes for the Jersey team reflected some strong performances against solid opponents.

The Blue Devils were somewhat complacent going into the game but they were jolted out of that mindset when the Red Raiders proceeded to take a 2-0 lead.

Maya McDermott, a senior who will sign with Syracuse University, got visiting SCH on the scoreboard, but it wasn't until just 24 seconds remained that junior Mary Trudeau put in the equalizer. The 2-2 tie allowed SCH to escape unbeaten, but it had been a close call.

"Pennington is a really good team and we weren't ready for that," admitted McDermott.

Once the Devils got over their early surprise, though, the senior said, "I think we were excited about it, because we hadn't been challenged like that. It made us work harder and play better."

Like SCH, the Irish of Notre Dame were undefeated going into last Tuesday's game back in Chestnut Hill. The Irish had two ties and two overtime victories on their record, while the Blue Devils had just the one tie, and all of their wins had come in regulation play.

McDermott related, "We worked hard to get ready for that game, because we knew that the winner would be the only undefeated team left in the Inter-Ac."

This season, Springside Chestnut Hill has emerged with some convincing wins in games which were tied 0-0 at the half. The Notre Dame contest would become another one of those. The Devils controlled most of the play in the first period and launched numerous shots, one of which hit a goal post.

McDermott explained, "We've sort of become the team to beat, so every other team always gets up to play us. It's not as easy for us to get psyched up every time, so sometimes we come out flat and we've sort of become a second-half team. That's something we need to work on. We need to get excited to play everyone, because you never know what's going to happen in a game."

On Tuesday, the home fans breathed a sigh of relief when their club finally put a point on the board around a dozen minutes into the second half. The goal came from Virginia Perry, who has blossomed into an offensive force for SCH in her senior season.

Notre Dame made a few attacking gestures in an attempt to tie the match, but then the Blue Devils reversed the flow, picking up an insurance goal when Perry scored again. The final score of 3-0 was locked in with a strike by Lisa "Watanya Cicilla" McIntyre, a junior.

In goal, junior Ellie Stratz went the distance for the shutout. The Irish got a strong performance from their keeper, but Stratz had a clear advantage in the strength of her punts, with her long boots consistently setting up the offensive transition out past the midfield stripe.

The SCH offense set the scoreboard in motion earlier in Thursday's game than it had against Notre Dame. The Blue Devils led Agnes Irwin 2-0 at the half thanks to markers by junior Bella Brown and McIntyre.

Nine minutes into the second period, senior Olivia Myers scored the first of Springside's five second-half goals. The Devils kept the ball on the ground much of the time, giving something of a clinic on ball control and the short passing game.

A few minutes after Myers' goal, an Irwin foul in the box led to a penalty kick by Brown, who buried the ball in the right side of the net. On a strong outside shot from the right wing across toward the top left corner of the Owls' cage, SCH was denied thanks to an impressive leaping save by AIS goalie Morgan O'Donnell. If not for the efforts of the Owls junior throughout the game, the Blue Devils could easily have scored in double digits.

Not long after the visiting keeper's dramatic stop, the Owls made a determined rush across the SCH 18-yard line at the other end, and freshman goalie Gracyn Lee Torchiana dove to her right to foil an Irwin shot. The ninth-grader played in the second half after Stratz guarded the cage in the first period. They have often split time in goal this season.

With a little over 15 minutes remaining in the game, the Irwin defense again left an SCH shooter open on the right side. Springside actually approached from the left endline, but a series of passes and deflections across the mouth of the goal sent the ball rolling out to the right, where Perry was in position to ram it home.

Later, Blue Devils junior Lanie Franklin scored on a kick and on a header within a two-minute span to put the last two points on the board. In addition to Perry's two goals earlier in the game, she also earned an assist, as did senior Lauren Sullivan, juniors Abby Kenkelen and Maia Mocharnuk, and sophomore Brynn Donohue.

SCH was now 7-0 in the Inter-Ac after its first contest in the second round of league games. In its last full season back in 2019, the Blue Devils had made a 12-0 run to the league championship. This fall, their goals are to not only repeat that feat in the Inter-Ac, but to win the Pa. Independent Schools tournament, as well.

"Our hashtag is OnAMission," McDermott pointed out. "We want to win the Inter-Ac and then win the state final."

Asked if there's one aspect of team performance that the Blue Devils will focus on during the last month of the season, the senior said, "Our biggest thing is probably keeping good team culture. It wasn't always great in the past, but this year we're all really close on the field and off the field."

That, in itself, is an impressive accomplishment on a varsity squad with 22 players.

"I think we're managing really well with that number of people, and everybody gets a chance to play," McDermott observed. "One thing that Maria [head coach Maria Kosmin] always emphasizes, and something the whole team takes pride in, is that our level doesn't drop when we substitute people into the game."