SCH lacrosse comes up one goal short in Irwin rematch

SCH lacrosse comes up one goal short in Irwin rematch 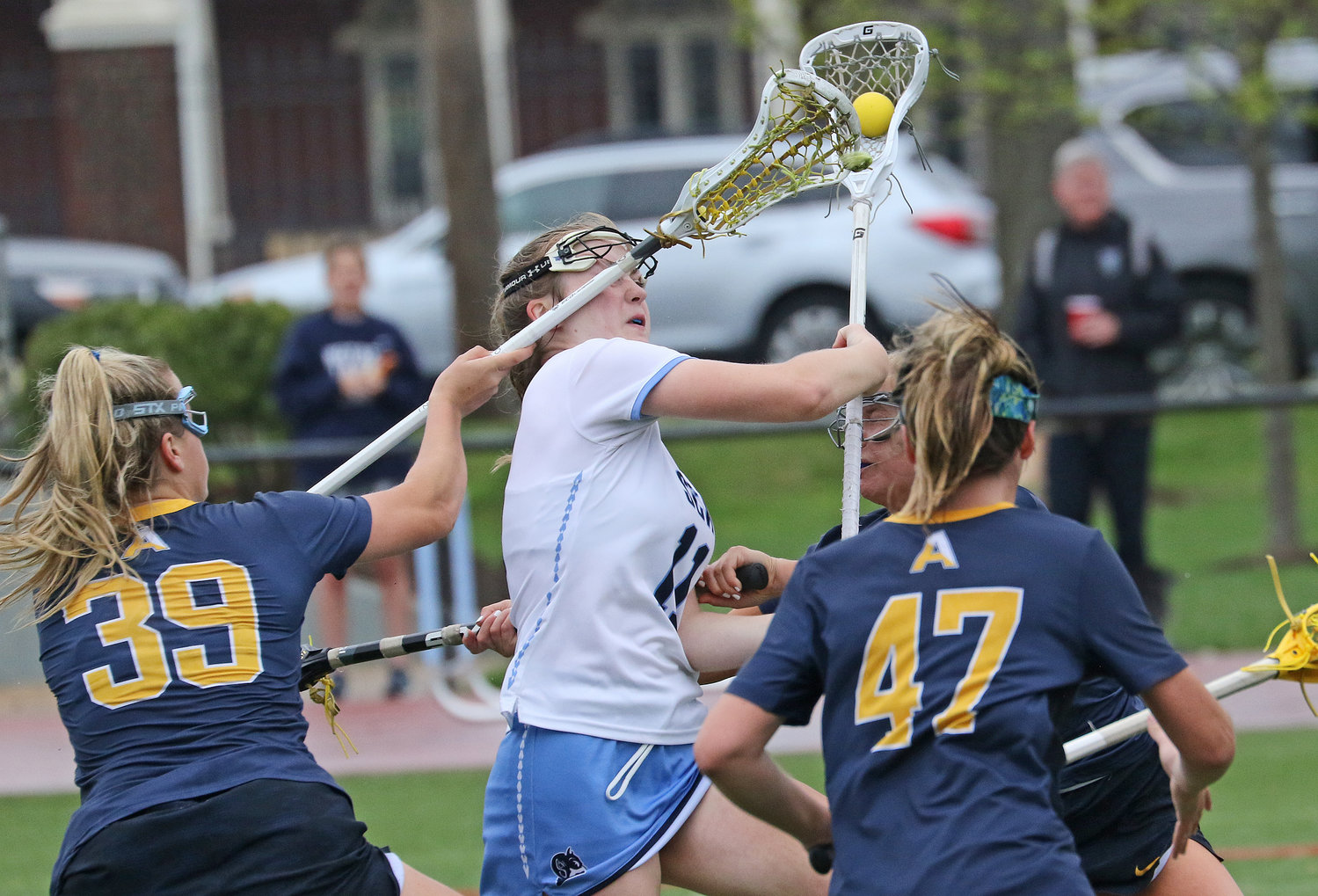 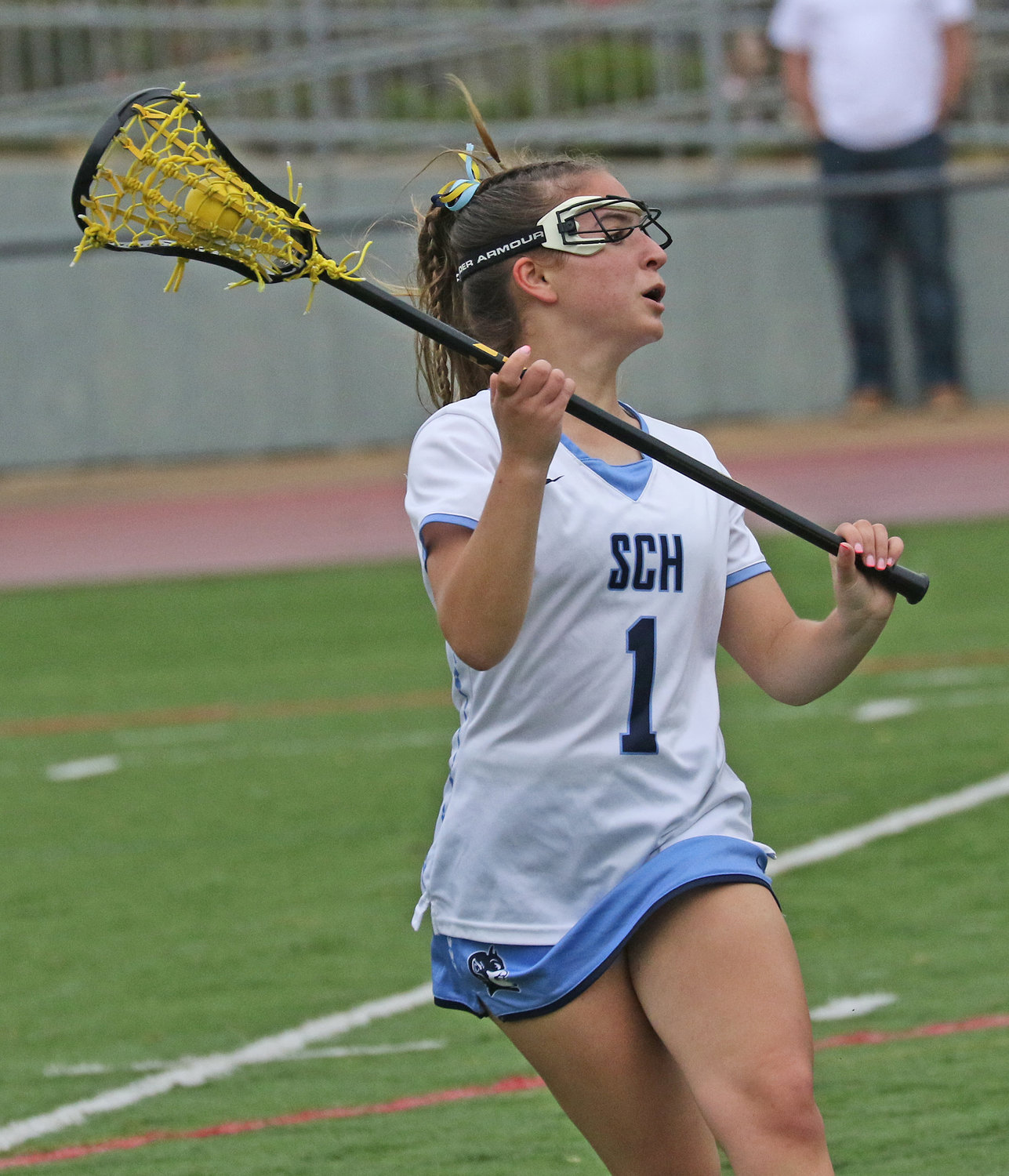 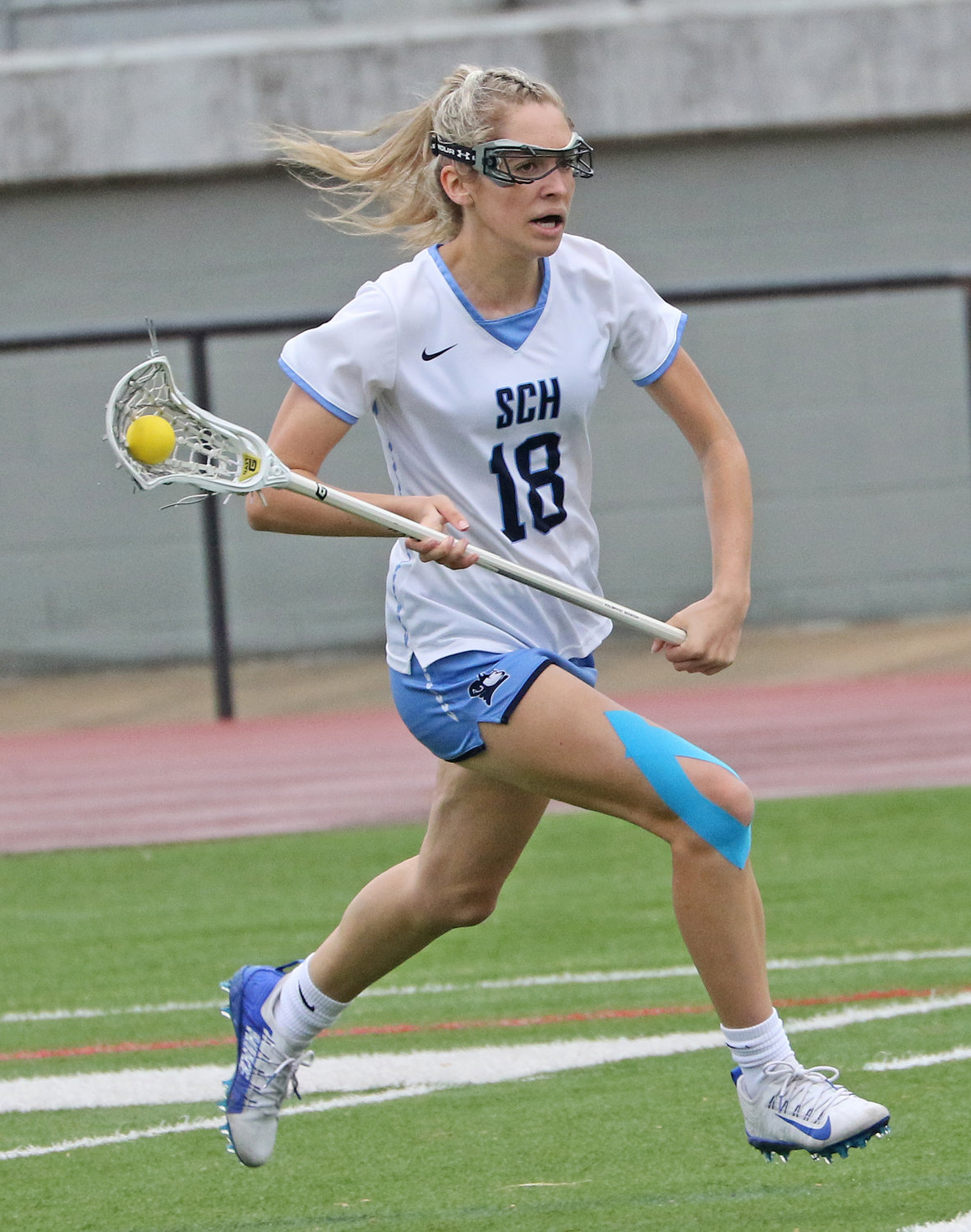 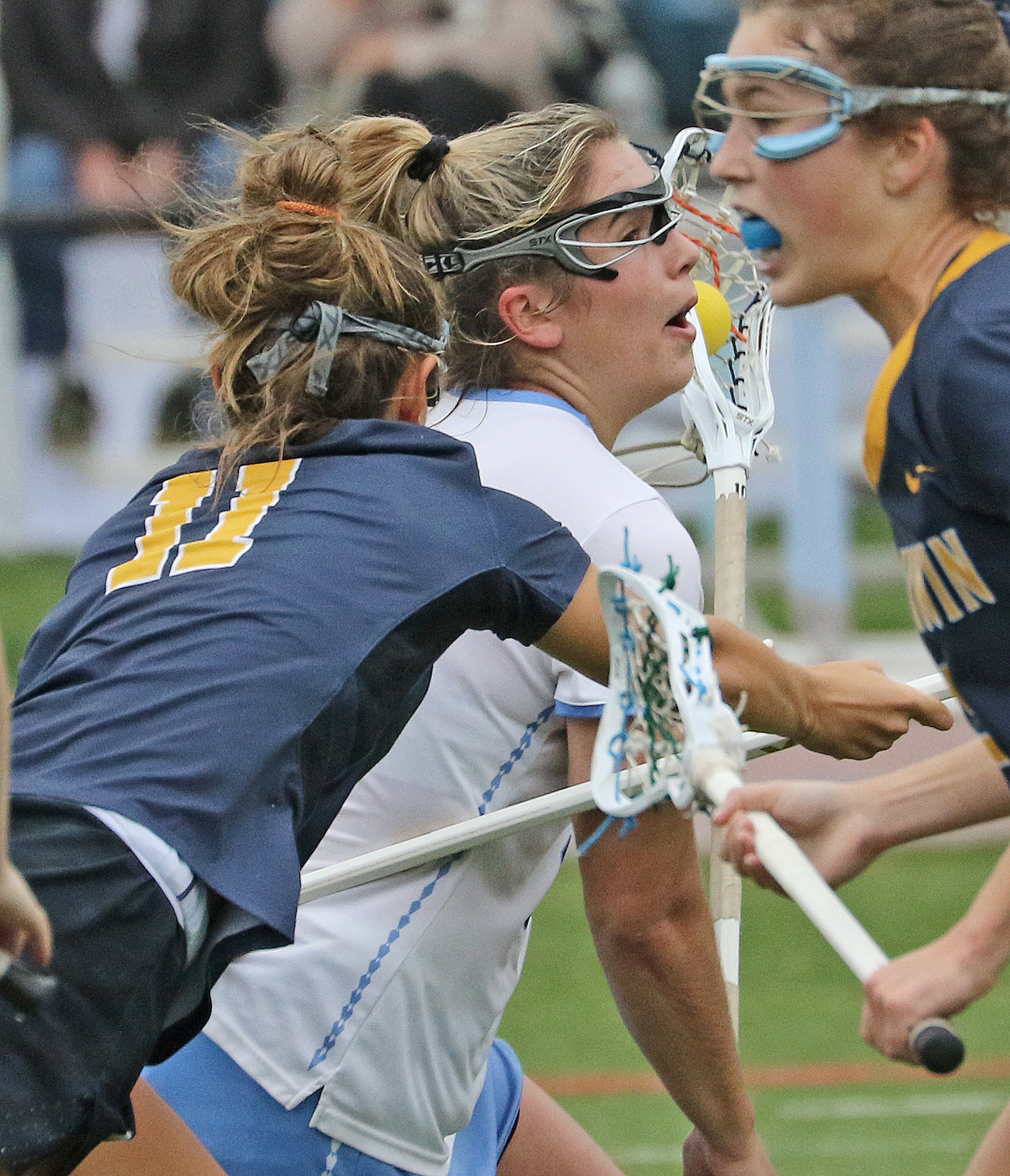 The Springside Chestnut Hill Academy girls have defeated almost all of their lacrosse rivals during the first month of the Inter-Ac League season, but victory has eluded them when they've faced Agnes Irwin School.

Starting their second round of league games last Tuesday, the Blue Devils were unable to avenge their three-goal loss to Irwin back in the 2022 Inter-Ac season opener. In the recent rematch, the gap between the teams did reach three goals several times in the second half, but most of the way the visiting Owls led by just one or two as they progressed toward an 11-10 victory.

Irwin was up, 11-8, then SCH deposited its ninth goal with 13 minutes remaining. Junior Emma Bradbury completed a personal hat trick to make it a one-goal game with half-a-minute to go, but then an attempt to tie the contest ended with an Irwin interception.

Springside slipped to 5-2 in the league while Irwin, which had not yet faced the Academy of Notre Dame, improved to 4-2. The Owls had lost their opener to Episcopal, and last week they suffered their second Inter-Ac setback at the hands of Penn Charter.

Five minutes into Tuesday's game at SCH, the hosts led 2-1 as goals by sophomore Sarah Scollin and Bradbury bracketed the Owls' first marker. Over the next two minutes, the visitors first tied the match and then went up 3-2 as senior Cate Parsells deposited the first of her game-high four goals.

Unlike some SCH opponents, the Owls knew from the get-go that rapid ball movement around the cage and convincing fakes were needed if they were going to score on the Blue Devils' Stanford-bound goalie, Lucy Pearson.

A shooting space call against Irwin led to a second goal for SCH's Scollin, who put in a bounce shot off of her free position to make it 3-3.

Just 23 seconds later the Owls went ahead for good as Katie Repp found the net after a nice pump fake. In the next minute the visitors went up, 5-3.

This initiated a pattern that saw Irwin go ahead by two goals and occasionally three, with SCH coming back within one point but never managing to pull even.

With 13:58 left in the first half sophomore Alex Reilly scored for the home team, getting the Blue Devils within one point at 5-4. Back in the goal cage, Pearson made an impressive save on an Irwin shot from the left edge of the crease, but the Owls kept possession and scored with 9:53 on the clock. They were up by three, 7-4, a few minutes later.

With three-and-a-half minutes left Reilly twisted past several defenders to score. Pearson kept the Devils within two goals by foiling a free-position shot by Irwin's Parsells (who'll go on to play for Georgetown).

Early in the final minute of the half, the Devils set up on offense with the ball behind the cage with senior Cece Reilly (Alex's sister and a Louisville signee). Sophomore Cortney Neverosky cut up the middle and slanted right to get an assist from Reilly and score.

Now, thought the home fans, we just need a defensive stop and we'll go into halftime only down 7-6. It was not to be; senior Marissa White scored Irwin's eighth with eight seconds remaining.

Sophomore Maddy Caliendo struck first for the Blue Devils in the third minute of the second half, then Irwin went up on attack. White was given a free position, but Pearson stopped her shot down low.

SCH's Bradbury cashed in on a free position with a shot placed just under the crossbar, but White responded for Irwin. With 13:04 remaining, Cece Reilly was able to snatch her own rebound out of the air and score to get the Blue Devils back within two.

It was now 11-9, and that score remained on the board almost until the end of the game. The Owls played aggressive defense, and as SCH sagged inward on its offensive set, things often became bunched up in the middle.

Over the first month of the season, SCH had forged a strong defensive until of its own, but in the middle of April senior Ava Schreiber suffered a hamstring injury and was still out of action last Tuesday.

When the clock got down below four minutes, the Owls began to hold the ball, but they turned it over with around 90 seconds remaining. On a relatively soft SCH shot, sophomore goalie Maggie Mullen made the last of her five saves for the Owls.

Irwin cleared the ball up into the midfield but Springside intercepted a pass with just under 40 ticks to go. This led to a free position for Bradbury and a marker that made it a one-goal game (11-10) with exactly half-a-minute remaining.

Irwin took the next draw, then there was a foul along the sideline near midfield. On the restart, Irwin didn't wait for the whistle, and the ball was given to SCH with the clock set to 12 seconds. On a long pass down into the arc by the Blue Devils the ball was picked off by the Owls and carried up the field as time ran out.

In addition to Bradbury's three goals, SCH received two apiece from Alex Reilly and Scollin, and one goal each from Cece Reilly, Caliendo, and sophomore Madison Freeman. Pearson recorded seven saves. Parsells' output for the Owls was supplemented by two goals apiece by White and senior Sydney Wilson.

UPDATE: On Thursday, Penn Charter avenged a 12-9 loss to SCH earlier in the month by defeating the Blue Devils, 17-3. The outcome was pretty much a foregone conclusion after the host Quakers built a 12-0 halftime lead. Senior Maddie Shoup scored five goals, junior Bea Buckley had four, and seniors Darcy Felter and Charlotte Hodgson put in two apiece.