In their last meeting of 2021, Springside Chestnut Hill Academy eked out a one-run victory over Penn Charter in an Inter-Ac League postseason tournament game. 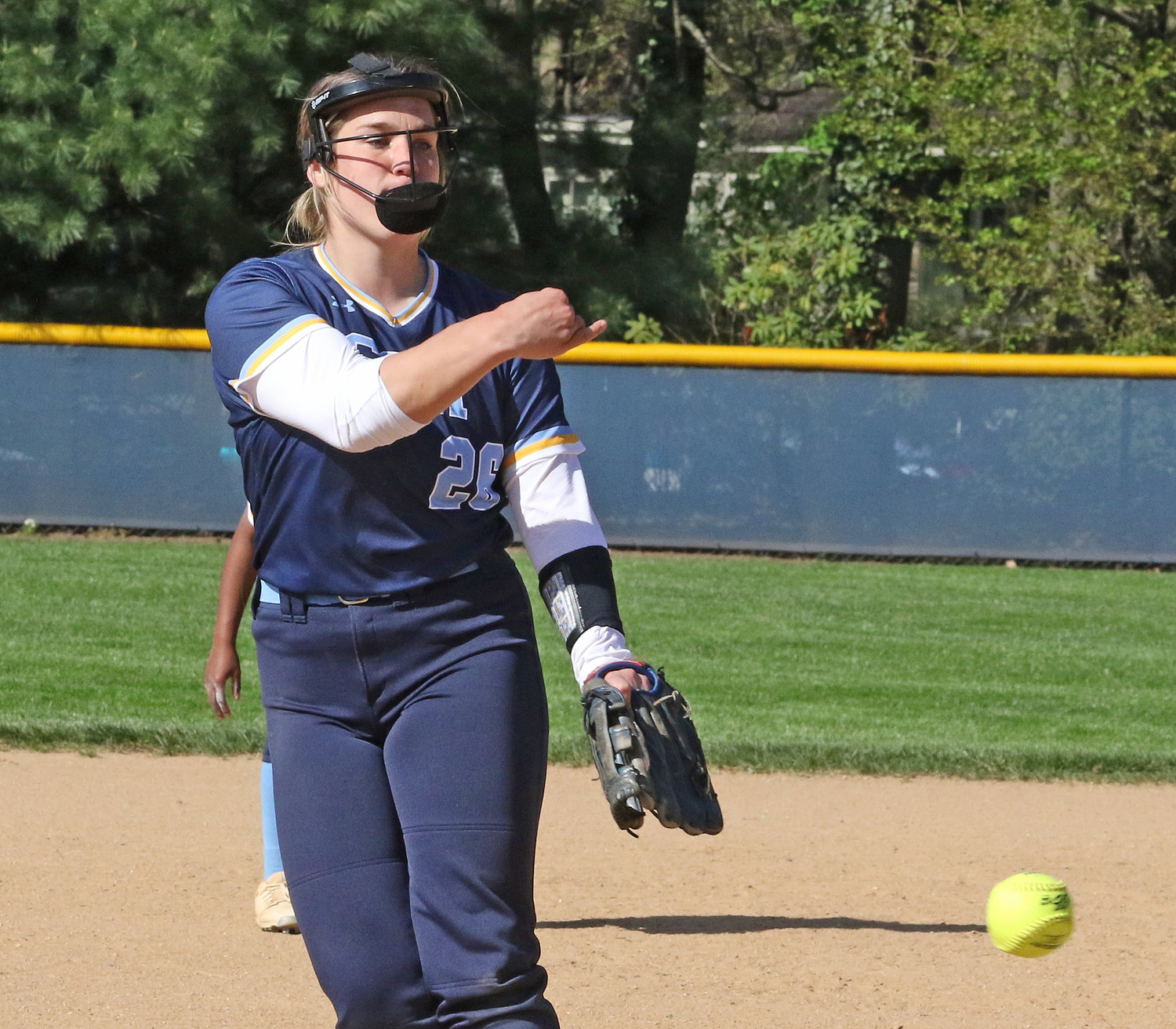 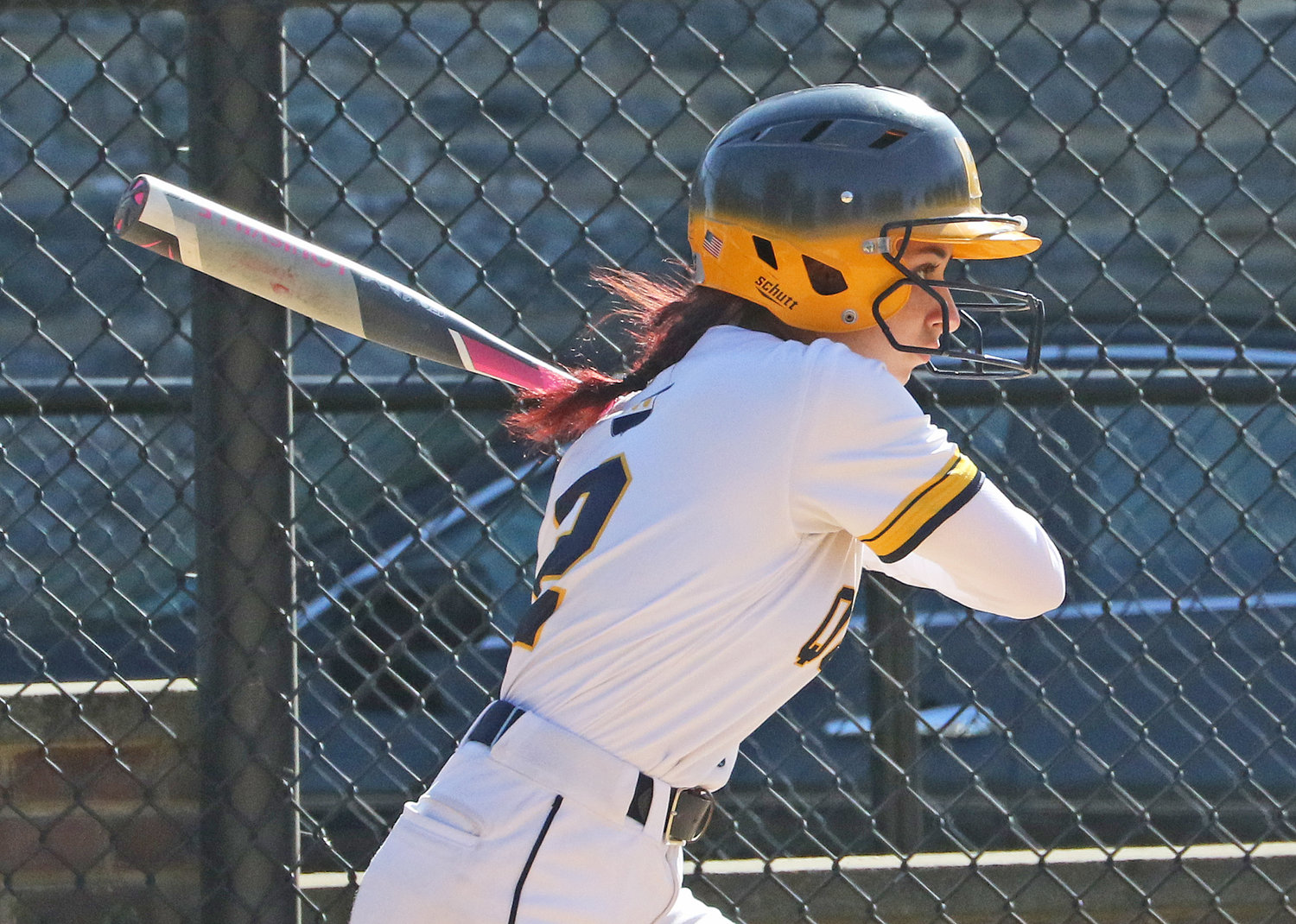 Starting out batting lefty and switching to the right side in the same at-bat, PC sophomore Bella Olsen drew a walk in the third inning.  Photo by Tom Utescher
Previous Next
Posted Saturday, April 30, 2022 12:34 pm
by Tom Utescher

In their last meeting of 2021, Springside Chestnut Hill Academy eked out a one-run victory over Penn Charter in an Inter-Ac League postseason tournament game. This spring, SCH has remained among the league leaders, currently in second place, while the PC Quakers have struggled a bit.

In early April the Blue Devils defeated Charter, 6-0, but in last week's rematch at PC the visiting Devils only had a 1-0 edge going into the seventh inning. They then reinforced their lead and emerged with a 4-0 victory, having outhit the Quakers 10-4 over the course of the afternoon.

Penn Charter's record fell to 2-4 in the league and 3-7 overall, while SCH left School House Lane at 6-1 in the league and 8-1 against all opponents. In a 2-0 loss to league leader Episcopal Academy on April 14, senior pitcher Sam Klug threw a no-hitter but the Blue Devil defense committed some costly errors. A thunderstorm ended the game prematurely.

Last Thursday at Penn Charter Klug struck out eight batters and walked one as she secured the victory. SCH was playing without injured senior infielder Darby Casey, who is expected to return in mid-May.

In the circle for Penn Charter, freshman Ryan Hatty had one strike-out and one walk. An older pitcher, sophomore Payton Handler, is injured and has not thrown this season.

Thursday marked the first appearance of PC senior Camryn Koslosky, the Quakers' seasoned shortstop. Coming off an elbow injury, she is supposed to limit her throwing, so she was stationed at first base.

At the bottom of the first inning and the top of the second each team had a runner or two on base, but the defense on each side turned a double play to keep anyone from scoring. With one out in the bottom of the second, PC freshman Lauren "Bubba" Gedraitis doubled to left center field, then the Blue Devils' Klug struck out the next two batters.

Likewise, SCH freshman McKayla McKeever was left on base after starting the third inning with a double down the line in left field. Next time up, the visitors would stage a two-out rally in the fourth frame.

Sophomore Kamaha'o Bode drew a walk, stole second base, then came around to score when freshman Layla Shands sent a hit to center field. Later PC got the third out with a tag at the plate, but the Devils had what proved to be the winning run in the scorebook.

Each team produced a single during the fifth inning, but no one scored.

In the sixth SCH got a single from Klug and then a double down the line in left from Bode with one out, then a pop-up and a ground-out followed. Charter went down in order in the bottom of the inning.

Singles by McKeever and junior Courtney Oliver started Springside's half of the seventh round, and the runners moved to second and third on a sacrifice bunt by junior Emma Blaszczak. Both scored on a double by junior Faith Scally that bounced to the fence in right field. Scally scored on Klug's single to right center, and the Quakers faced a 4-0 deficit when they picked up the bats for the final time.

A towering ball hit in the air by PC sophomore Macie Bergmann went almost straight up, landing just beyond the infield in left field. It puzzled the SCH defense, and Bergman reached second base for a promising start for Penn Charter. There she would stay, as a fly-out, a strike-out, and a pop-up closed out the contest.