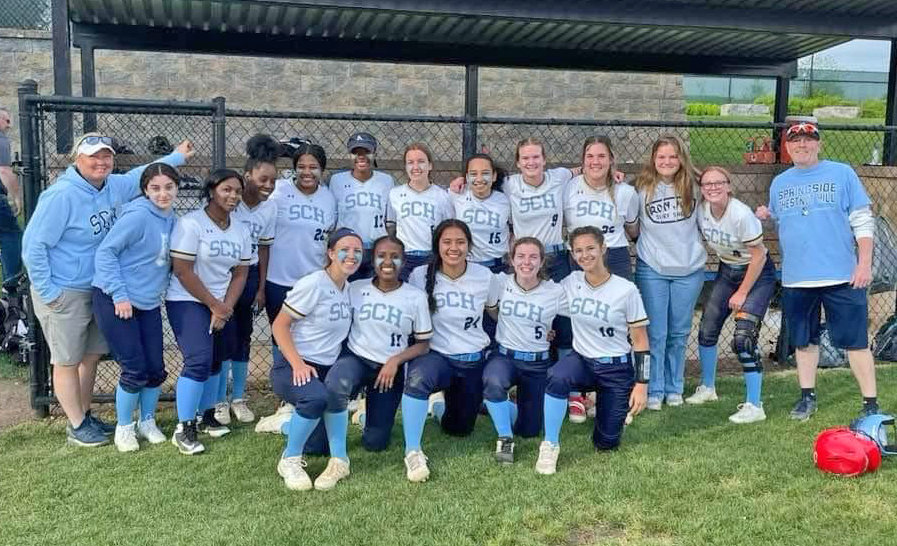 With two easy softball victories last week, Springside Chestnut Hill Academy became co-champion of the Inter-Ac League for 2022. In April and in early May, the Blue Devils split their two games against Episcopal Academy, each team winning on its home field.

Wrapping up the league campaign last week, both teams overcame opponents farther down in the standings to finish with 11-1 records. In non-league games, SCH defeated Shipley School and Archbishop Ryan, finishing the regular season with an overall mark of 13-1.

The Blue Devils started the season with a spring training trip to Florida, but only played four games in the Sunshine State. The low number of Florida contests and of non-league bouts back home stemmed from the fact that SCH had only one pitcher in its rotation, senior Sam Klug.

"That was really my one concern with the team, and I didn't want to over-pitch her," said longtime head coach Stephanie Mill, adding that she had a few other players in mind to step into the circle on an emergency basis.

The Blue Devils would never need them, as Klug threw every inning of the season and compiled a remarkable record.

"She shut out every team in the league except Episcopal, and right now her ERA is 0.2," said Coach Mill. "I've never had a pitcher come anywhere close to that."

Although Klug only threw three varsity seasons due to the 2020 COVID-19 shutdown, she finished the 2022 regular season with 399 strike-outs, and still had the Pa. Independent Schools tournament ahead of her.

The other half of the SCH battery is senior catcher Marissa Wolff, who came up through the program along with Klug. The third senior on the roster is second baseman Darby Casey, who entered Springside Chestnut Hill last year. She and Klug will both play in NCAA Division II going forward, Klug at West Chester University and Casey at New Jersey's Georgian Court University, which belongs to the same athletic conference as Chestnut Hill College and Jefferson University.

When Casey was injured for a short time during the season, junior third baseman Courtney Oliver moved over to cover second and freshman Layla Shands took over at third. Both of these two athletes began to play on the varsity squad when they were eighth-graders. Oliver, the lead-off hitter, grew up watching SCH softball; her older sister Colebe ('19) used to swing a mean bat for the Blue Devils.

The only varsity player to graduate from the 2021 team was first baseman Trinity Smith. Sophomore Kamaha'o Bode had played in the outfield, but with Smith gone she moved in to first, a good fit for the southpaw.

Remaining in the outfield from last season was junior Emma Blaszczak.

Just this year a new shortstop arrived on campus. Faith Scally entered SCH as a junior after the permanent closing of her previous school, John W. Hallahan in center city.

Two other players entered SCH as freshmen, Ava Figueroa and McKayla McKeever. McKeever played right field, while in left field Figueroa split time with Shands. While Casey was injured and Shands moved to the infield, Figueroa held down the left field spot. To limit wear and tear on Klug, whenever the SCH hurler got on base she was replaced by speedy junior Samaya Goodwin as a pinch runner.

Springside Chestnut Hill started out 3-0 in the Inter-Ac League, opening up with a 6-0 victory over traditional archrival Penn Charter. In the fourth game, in mid-April, the Blue Devils lost 2-0 at Episcopal, which was the undefeated Inter-Ac champion in 2021. Klug didn't give up any hits in the game, but uncharacteristic errors by the visitors let in the EA runs.

Mill related that after an early spate of strike-outs, her batters were starting to figure out Episcopal's talented freshman pitcher and earned a few walks. Still, they hadn't scored by the time a thunderstorm ended the game after five innings.

In the Blue Devils' rematch with the Churchwomen on May 10, visiting Episcopal again attained a 2-0 lead and came very close to winning by that score. Mill related that her ball club went into the bottom of the seventh with no runs on the board, and started out with two outs.

Casey drew a walk for SCH, but then the Devils found themselves on the brink of defeat two times as EA got 0-2 counts against both Scally and Klug. Each came through with base hits to load the bases, then Wolff slammed a 2-2 pitch over the head of the left fielder, clearing the bags for a 3-2 SCH victory.

After that, both teams won their remaining league games to tie for the Inter-Ac title. After beating Agnes Irwin, 4-2, Episcopal eked out an 11-10 victory over a greatly improved Germantown Academy team. In their swansong, the Churchwomen trailed Baldwin School in the late innings last Thursday, but wound up winning, 10-6.

Many times throughout the season, the Blue Devils did a lot of their scoring in the late stages of their games.

"I told them they needed to hit that way right from the start of the game," Mill said.

She also emphasized that her charges should take every opponent seriously, and pointed out as an example the 2021 playoffs. There, Baldwin had stepped up in the semifinals and finals to upset first Episcopal and then SCH.

The veteran coach, who was assisted by Bill Hannigan, noted that good team chemistry was part of the Blue Devils' formula for success.

"They always pushed each other, and made each other work hard," she said.

Episcopal Academy decided not to enter the Pa. Independent Schools tournament, so SCH naturally received the top seed for the tourney, which goes on throughout this week.