Lester's work centers of the themes that are most personal and important to him, such as “the central role of God in the union between man and woman,” biblical creationism and family and children. 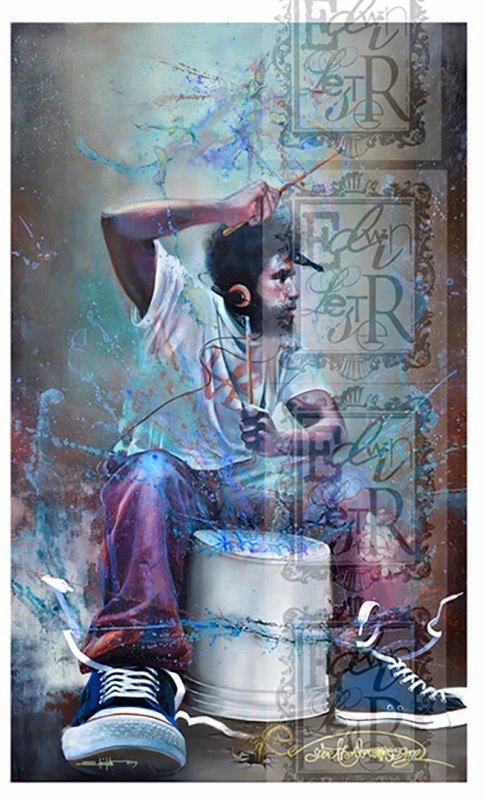 “Give the Drummer Some,” by Edwin Lester. 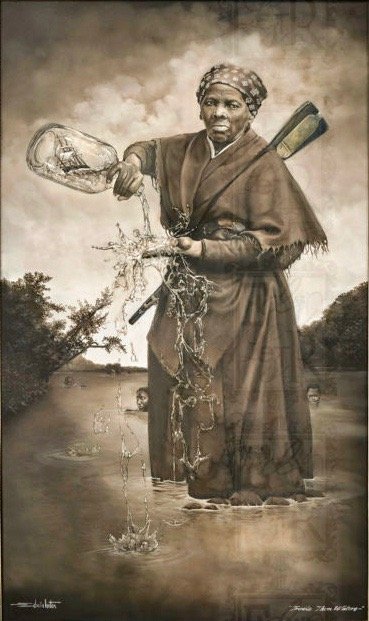 Over the years I have seen several outstanding artists' works exhibited at the 35-year-old October Gallery, 6353 Greene St., on the border separating Mt. Airy and Germantown, one of the oldest African American art galleries in the nation. But I was never before so moved as I have been by the work of Edwin Lester, 50, who is currently being represented by the gallery. Lester is a Philadelphia artist, but when asked what part of the city he grew up in, he replied, “All over. For security purposes I cannot disclose that information.”

What makes Lester's powerful, evocative work even more impressive is the fact that he is self-taught and never had any schooling after attending Bartram and Girard College High Schools. “Don't think; just paint,” he says. “There is plenty of time to think while you're painting...I just love what I do, and when I walk out into the world each day, there is so much to see, so much to paint. For tomorrow is not promised. So today I will say what I can, do as I must and paint what I can, even if it's just one stroke."

I have unfortunately never had any artistic talent myself (although my stick figures are pretty impressive), but I had a magnificent, inspirational art professor and World War II veteran at Muhlenberg College named Alfred Colarusso (1920-2008), who would have loved Lester because he is a master at chiaroscuro, which was Colarusso's favorite medium. “It allows a detailed, layered approach with oils,” said Lester.

(Chiaroscuro is an extensive gradation of light and darkness to heighten emotional tension. Some of the greatest exponents of chiaroscuro were DaVinci, Rembrandt, Rubens, Velazquez and Caravaggio. By applying light tones on top of dark, artists can create the effect of figures emerging from shadows.)

Lester has produced a successful line of best-selling limited edition and open edition prints and has exhibited at fairs and shows that include the Philadelphia Art Expo. His work is widely collected and has been in galleries around the world and a few museums, such as The Biblical Museum in Dallas. He has created a series of figurative, atmospheric paintings in a collection of works called “The Uncolored Series.” He refers to them as “paintings about color without color, not for decoration.” They are done in dramatic monochromatic hues of brown and gray, and each painting deals with an issue in the stages of African American history, life and culture.

Lester's work centers of the themes that are most personal and important to him, such as “the central role of God in the union between man and woman,” biblical creationism and family and children. “I don't necessarily consider myself to be a spiritual or concept artist,” he said. “I like to paint images which are a part of my everyday life. God, love, simply living and trying to be the best I can at whatever I am trying to accomplish that day.”

What is the best advice Lester has ever received? “In his heart a man plans his course, but the Lord determines his steps.”

What is the hardest thing Lester ever had to do? “Just keep living.”

What person has had the greatest impact on Lester's life? “My mom. There is nothing like the support and love of a mother.”

If Lester could meet and spent time with anyone on earth, living or dead, who would it be and why? “Jesus Christ because we all want the answers.”