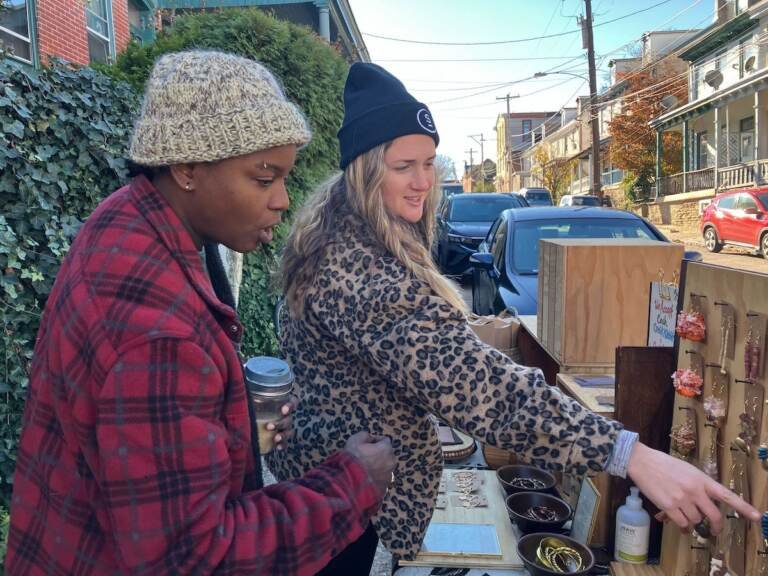 Yana Donaldson and Alyssa Weinfurtner look at jewelry at the Black Soul Block Party in Germantown on Saturday.
Photo by Sammy Caiola/WHYY
Posted Thursday, December 1, 2022 12:00 am
by Sammy Caiola (WHYY)

Weinfurtner said they’ve set an intention to buy locally this holiday season, even though some of their traditions are changing because of inflation.

“[My family] just kind of decided we’re not doing gifts this year,” she said. “But I’m an artist, so I always try to support the artists … in some ways I feel even more inclined to buy from local artists just because everything’s so hard right now.”

Germantown business leaders launched the shopping season with multiple Small Business Saturday events, hoping to entice consumers who might be wary considering signs of a possible economic downturn. The largely-Black neighborhood — which has a rich anti-slavery history — has seen investment and revitalization in recent years, particularly along the Germantown Avenue corridor.

He said local businesses have benefited from a combination of neighborhood clean-up efforts and assistance from the City of Philadelphia.

“I’ve seen the energy change,” he said. “I’ve seen the avenue come alive. We always look to these other neighborhoods as, ‘Oh, we should have something like that,’ and what I see is the business owners in this area wanting that as well and creating their own renaissance.”

Mayor Jim Kenney visited Germantown Avenue on Saturday to support local businesses, popping into an art gallery and a dance studio. He said he wants to learn more about the needs of small business owners, paying particular attention to Black entrepreneurs.

“When you come across jewels like this you realize there’s so much more we don’t know about that whole economy,” he said. “[They] give neighborhoods the flavor that they have.”

The city’s Storefront Improvement Program will reimburse business owners for 50% of the cost of signage and other exterior touches up to $10,000 per property.

Photographer and gallery owner Steven CW Taylor received a grant when he opened Ubuntu Fine Arts on Germantown Avenue about a year ago.

“It helped immensely with being able to have signage so people could recognize us,” he said.

Small business owners are likely bracing for a slow season, as some Philadelphians are reducing their discretionary spending in response to inflation. Economists predict that low- and middle-class Americans will spend less on gifts this year than they did during the 2021 holiday season.

One survey from professional services firm PricewaterhouseCoopers found that 74% of Americans plan to spend the same or more on holiday gifts as they did last year.

Skin care product maker Bria Ricks, who tabled at a Small Business Saturday event in Germantown, said she’s already nervous about sales, particularly because the cost of her raw ingredients has gone up.

“So it’s like, do I increase the prices as well or do I stay where I am?” she said. “It’s just tough to compete with big box stores.”

But there are plenty of reasons to seek out Germantown-made goods, shoppers said. Melvin Tillman and his wife visited from their Francisville neighborhood, closer to Center City, to patronize Uncle Bobbie’s Coffee and Books. They left with gifts for the child they’re expecting next year.

“Not just any baby books, but baby books that have some social awareness,” Tillman said. “We are in an interracial relationship and we’re trying to be really thoughtful in terms of the education this kid’s gonna receive, ‘cause the world is going to treat them a certain way … books that can be really empowering, that’s specifically why we went to Uncle Bobbie’s.”