At the invitation of the Springfield Township Board of Commissioners, Magistrate Judge Kate McGill (Montgomery County 38-1-08 … 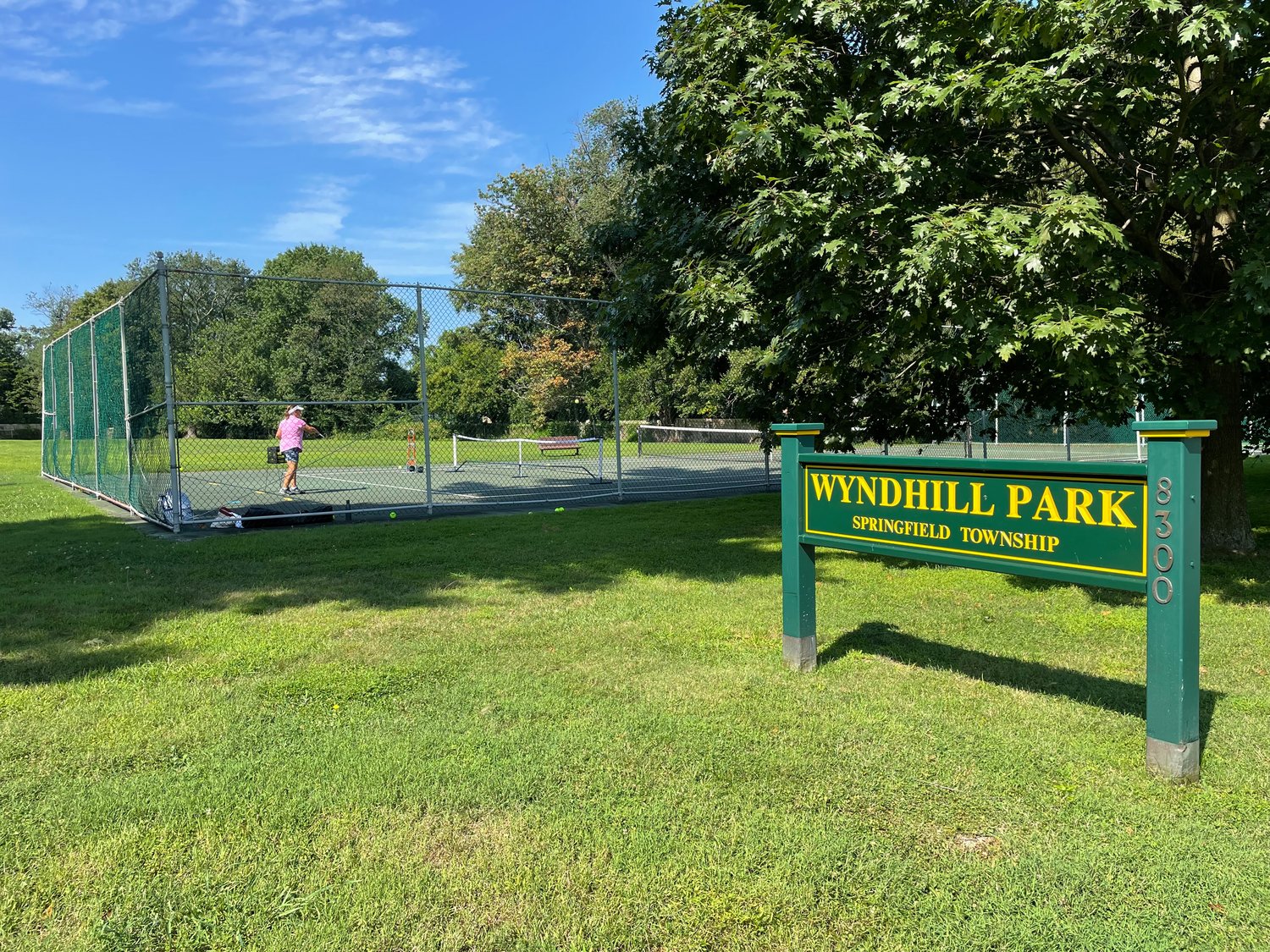 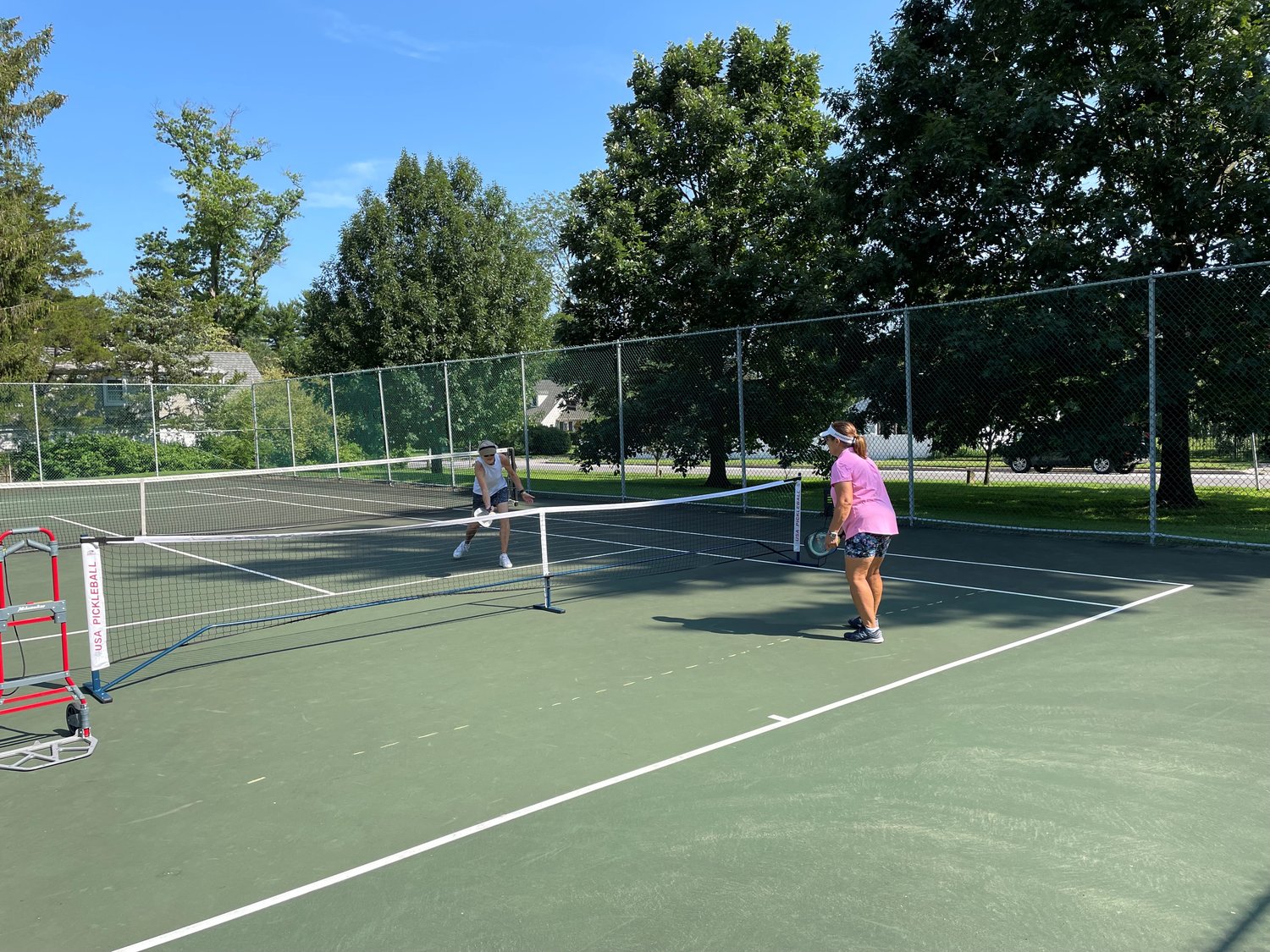 Anne Klinger (Wyndmoor resident in white) and her pickleball coach, Palma Leomparra (in pink) on the Wyndhill Tennis courts. The Township will paint temporary pickle ball lines soon and provide portable nets like the one shown here.
Previous Next
Posted Thursday, August 19, 2021 8:30 am
by Betsy Wallace

At the invitation of the Springfield Township Board of Commissioners, Magistrate Judge Kate McGill (Montgomery County 38-1-08 Magisterial District) gave a presentation at the Board’s August workshop meeting on the state of our courts, a first for this Board, which will be repeated annually.  McGill, Magistrate Judge for Magisterial District 38-1-08 handles preliminary criminal proceedings for adults charged with misdemeanors and felonies, bench trials for summary offences (DUIs, other traffic citations, disorderly conduct etc.), small claims civil bench trials, landlord/tenant cases, truancy, and marriages.

McGill says that, in her court, most of the parties in civil, traffic, and summary criminal cases are not represented by counsel, and it is the police who often act in the role of a prosecutor, which makes it uniquely different from the higher courts.  McGill explained that “magistrate courts are the first and only time most people will interact with the court system, so it’s important that the experience instills faith in our justice system.”  Her role sometimes resembles that of a mediator/social worker.

Landlord/Tenant eviction cases were low during the pandemic due to the CDC eviction moratorium in effect since early 2020.  That will come to an end soon, McGill reported that “in Montco and across the Commonwealth, we have a ton of funding available for rental assistance.”  She identified an organization called “Your Way Home,” which can provide assistance right now for those struggling to pay rent because of the pandemic.  Part of what McGill does is try to connect people with that assistance.

COVID impacted the court system hard.  The higher courts handling jury trials closed down for the entire year causing an extensive backlog that exists today.  Jury trials just started up again in the Common Pleas and Superior Courts in July.  Magistrate courts, however, were able to adapt to the pandemic easily and cleaned up their backlog quickly.  Although the Magistrate courts closed for the first few months during the pandemic, the 30 Montco magistrate judges continued to be on call for criminal cases and emergencies.  After that, they did everything on zoom.  McGill reported that they are now transitioning back to all in-person hearings, except traffic hearings because the defendants, police and attorneys (if any) prefer the zoom hearings.  As for criminal arraignments, Magistrate courts were already using simultaneous audio/visual for arraignments pre-pandemic.  They switched to zoom for arraignments in 2020 and plan to continue this going forward.

Although the Magistrate court caseload decreased substantially during the pandemic, McGill pointed out that domestic violence cases “went through the roof.  That’s what we were seeing quite a bit of.”

McGill announced the creation of a new branch of the County’s Supervision Services, called “Pretrial Services,” a project that McGill herself worked on for two years.  Traditionally, magistrate judges had very little information to assist them in setting bail for an adult at an arraignment and that the Judge had no tools in the toolbox to oversee those bail conditions.  Pre-trial services fills that gap,” McGill said.

Now the police send the arrest information directly to pre-trial services, which then interviews the person, connects them to treatment where appropriate, and does the necessary follow-up.  Pre-trial services provides a bail assessment to the Magistrate Judge and attends the virtual arraignment along with a Public Defender and a Prosecutor (previously there were no attorneys present).

McGill presented caseload statistics for 2018-2020.  Although there was an understandable dip in overall caseload in 2020 (largely attributable to the reduction on traffic cases during the pandemic), McGill expects that the 2021 caseload will return to its normal level, about 4500-5000 traffic cases/year (one-half are uncontested), 131 civil cases, and 450 criminal cases.

Springfield Township has already received $1 million in federal funds under the American Recovery Plan Act this past July and will receive another $1 million next summer. The law limits the type of project to physical improvement projects like stormwater, sewer, and broadband infrastructure.  Township Deputy Manager, Brandon Ford, recommended that the Township spend no more than $750,000/year over a six-year period to avoid having to undergo an expensive and time-consuming federal single audit that would be in addition to the Township’s annual audit.

The Board directed the Township Administration, Public Works, and the Township Engineer to review a number of different projects, develop cost estimates and present a plan to the Board for September’s workshop meeting.

The Board directed Township Manager Taylor to proceed with painting lines on the tennis courts at Wyndhill Park in Wyndmoor and to procure two portable pickle ball nets that can be set up and stored at the site.

Chris Vernick, (township resident, full-time educator, and former basketball coach for Lower Merion Township) announced a basketball league he started during the pandemic that was open to rising middle/junior high schooler boys and girls from a mix of townships, including Springfield.  Using Myles Park in Whitemarsh, the league had eleven teams that played eight games and a playoff.  Vernick wants to base the League in Springfield Township.  Commissioner Graham suggested that he submit a proposal to the Parks and Recreation Committee.

Township residents can obtain audio recording of past Board Workshop meetings by contacting Township Manager, Michael Taylor at mtaylor@springfieldmontco.org.  You can access all Board Business Meeting Agendas, Minutes and recordings on the  Springfield Township website.