Streetscape is a regular column on architecture and planning. 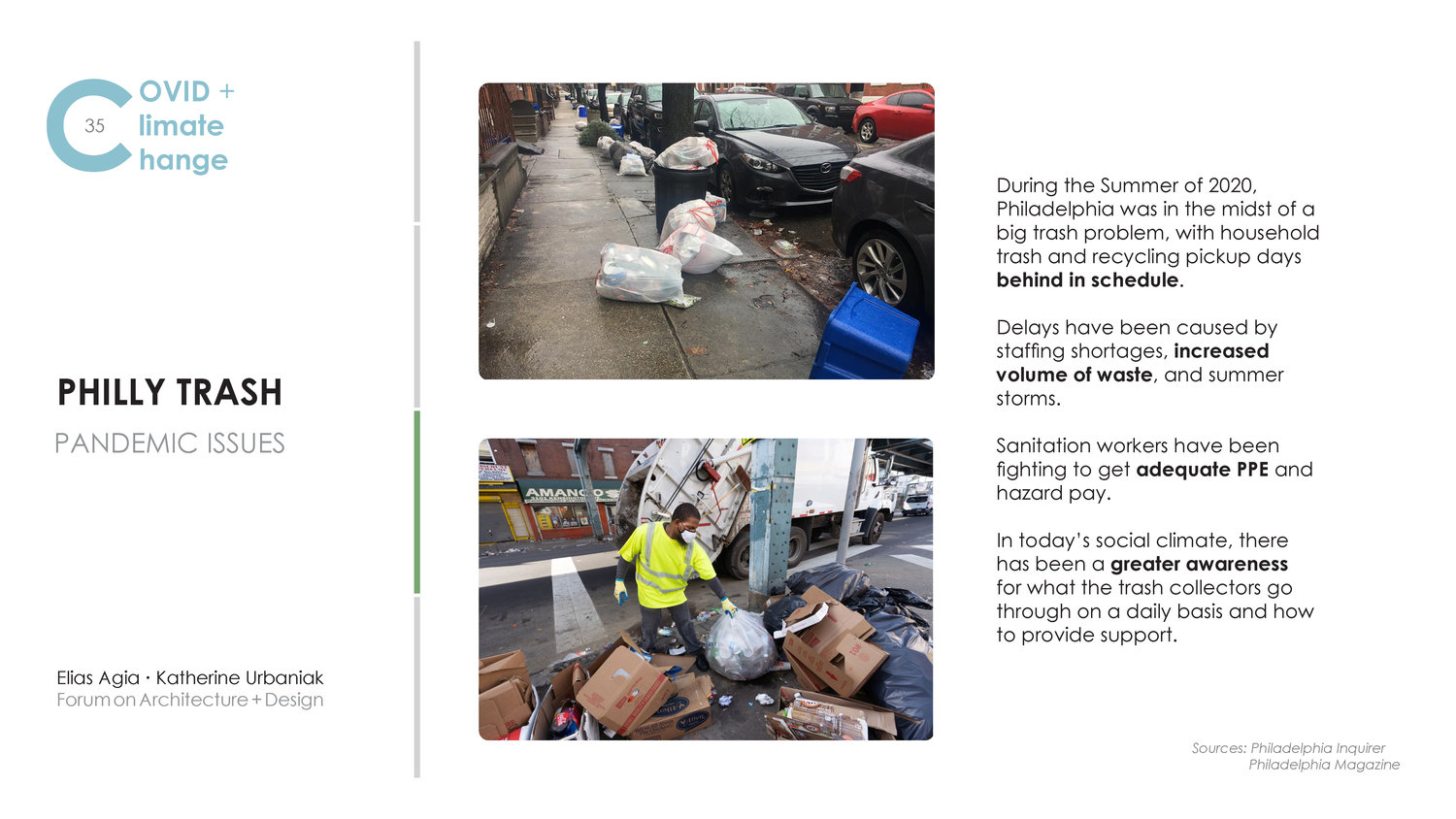 A slide from a recent AIA panel on Covid changes and environmental impact.
Posted Friday, November 6, 2020 10:27 am
by Diane M. Fiske

Streetscape is a regular column on architecture and planning.

The global pandemic showed that massive and immediate environmental change is possible according to leaders at the annual American Institute of Architects forum late last month.

Architects Elias Agia of Re: Vision and Katherine Urbaniak of NELSON Worldwide led a workshop that asked, “What is the effect on the world now that everyone is preoccupied by the pandemic?”

Agia and Urbaniak asked about the effect of the pandemic at their presentation at the AIA Forum which is usually a weeklong event in Center City. The AIA forum was smaller and virtual this year with presentations sprinkled over a week. Most of the program was led by architects and city leaders and attended by a professional audience.

Among other environmental observations, Agia pointed out was that people should be aware of a point on the calendar when the earth’s capacity to fulfill its need to feed populations was reached. That is Overshoot day, which was in August this year as opposed to July last year. The extension was due to the pandemic.

Agia also noted there was concern in the last 100 years the temperature index has increased about 1.7 degrees Fahrenheit. If it goes up by that amount again, global warming could be dangerous.

As a first step, the forum participants were asked if they saw improvements during the early pandemic such as more communication with nature, less traffic noise and a little less pollution.

With the idea that everything was not negative during the pandemic, the virtual audience was asked several questions by the forum leaders, including “did you hear less noise, see less traffic, and find less pollution?”

Many of the virtual participants responded from their home computers that they heard less noise, and saw less traffic. They said they experienced more communication with nature. Some said they felt there was not a great deal less pollution.

But Agia reminded his audience that these fixes were temporary and don't solve deep environmental problems.

“It was spring and the air was cleaner,” Agia said. He added that air in the spring is always cleaner.

Agia and Urbaniak asked the audience to think about their own reaction to the Covid changes most of them experienced during the beginning of the pandemic which is still going on.

“How do we move forward when landfills are filling up with plastic bags as well as paper?” Urbaniak asked. “When global warming is widespread, what is the effect upon the earth and our temperature while everyone is preoccupied with Covid?”

Urbaniak presented material showing that recycling doesn't really work anymore. Countries such as China no longer buy our plastic and paper bags that do not decompose are filling up landfills.

The answer, she said, in one instance, is for people to use reusable bags that are not allowed in some stores but are mandated in other states.

Eliminating plastic and paper bags is just one solution, but it is a good one because it could lead to less energy being used to eliminate waste.

Agia asked the virtual audience to volunteer their options on the idea that the environmental impact of the pandemic has provided a greater perspective on the scale of change required to mitigate the climate crisis.

He suggested the audience might remember being able to feel part of nature by hearing bird songs and seeing more wild small animals.

“What we need to know is the scale of change required to mitigate the impending climate crisis.

Maybe the pandemic will help us begin the process to clarify the amount of change that can be possible,” he said.