If you happen to dine at three of the four White Dog Cafés in the region, you will see huge, spectacular paintings of dogs on the walls. You don't have to be an art maven or even a dog lover to appreciate them. 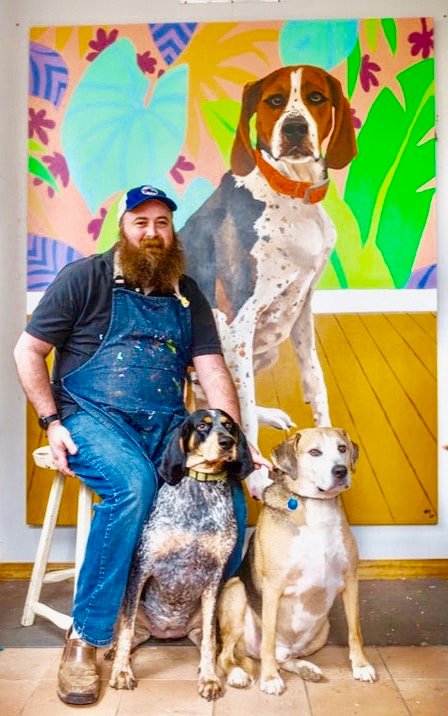 As anyone can see, McClellan's giant painted dogs look just as life-like as the real-life dogs. 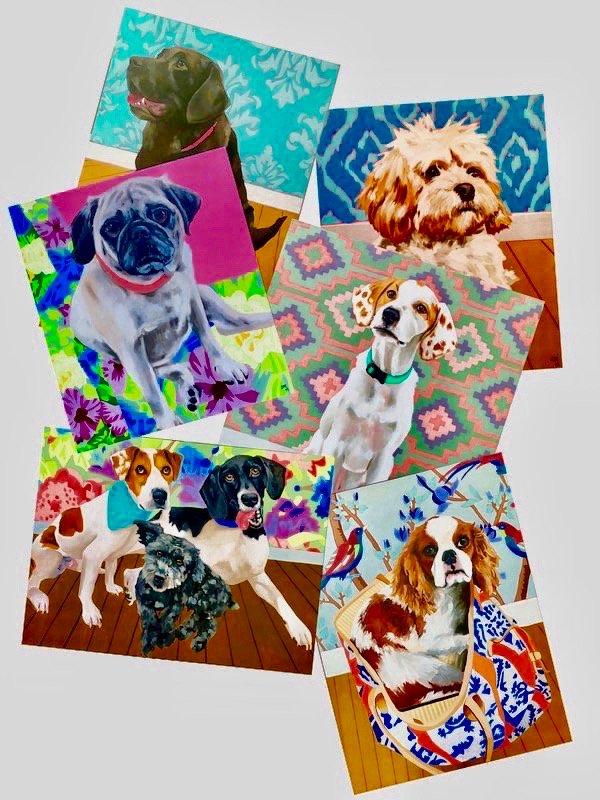 A collage of some of Jay's countless dog portraits.
Previous Next
Posted Friday, November 19, 2021 6:00 am
by Len Lear

If you happen to dine at three of the four White Dog Cafés in the region, you will see huge, spectacular paintings of dogs on the walls. For example, the new White Dog Café in Glen Mills has 61 of them. You might say the property is a combination of an art gallery and a high-end restaurant. One cannot help but be impressed by the size and lifelike nature of the works. You don't have to be an art maven or even a dog lover to appreciate them.

Members of the public were actually allowed to buy paintings of their own dogs from the artist to hang up in the new Glen Mills restaurant permanently. Renowned canine artist Jay McClellan of East Falls, who painted all these canine portraits, has given half of the proceeds from their sale to two local nonprofits, Brandywine Valley SPCA and Alpha Bravo Canine. Each organization got more than $18,000.

You can also see his giant dog paintings at the Urban Outfitters Corporate office in the Philadelphia Navy Yard. McClellan, who thinks he is “probably related” to Gen. George McClellan, the Civil War general and Philadelphia native who was dismissed in 1862 by President Lincoln as General-in-Chief of the Union Army for alleged timidity, teaches drawing at Jefferson/Philadelphia University in East Falls.

McClellan and eight other local decorators and designers have also created nine unique dog houses that are being auctioned online to benefit an array of local nonprofit organizations on Dec. 3. (For more information, visit benevolenthound.org)

How has the pandemic affected McClellan, whose works have also been exhibited at Chestnut Hill's Gravers Lane Gallery over the years?

“The pandemic affected the family the most!” he replied. “My daughter had to leave daycare, and my wife worked from home, but they were always around, which was nice. As far as my studio business, I had more commissions than usual. People spending more time in their homes and with their dogs, I believe, helped drive the uptick in commissions, although I had no in-person or studio visits.”

McClellan, who started the nonprofit Benevolent Hound last year with this community of dog-loving artists, has had his paintings exhibited nationally and are held in many private collections including that of former Phillies second baseman, Chase Utley. Awards include Honorable Mention at the 45th Annual Delta Exhibition and the Mabel Wilson Woodrow Fellowship Award at the Pennsylvania Academy of Fine Arts.

One of his satisfied customers, Marcea Driscoll of Chestnut Hill, previously told us, “We love Jay's painting of our dogs, and the two paintings hang in our family room. They are bright and happy and a great rendering of our dogs. The best part is how Jay is able to capture the soul of the dogs in their eyes.”

McClellan was born in Maumelle, Arkansas, a small town outside of Little Rock. After 10 years of a lucrative career in the graphic design industry and his mother’s death due to pancreatic cancer, McClellan made the tough decision to go back to school. He earned a Bachelor of Fine Arts degree from the Memphis College of Art and then a Master of Fine Arts from the Pennsylvania Academy of Fine Arts.

Why walk away from a lucrative career to roll the dice on fine art, even though most fine artists are struggling to pay the bills?

“I was looking for something more out of life,” he explained. “Long days of being creative in a pressure-filled environment was not the way I wanted to live my life … and there is a common but special connection that we make with the dogs that I like to share with the people I work with. ‘Struggling to pay bills’ is a part of life. For me painting has never been about money; it’s always been about the connection I make with the viewer and that common bond we have with dogs.”

Asked if he could live in an earlier time, when would it be, McClellan responded, “Probably late 19th and early 20th century during the Impressionist, Post-Impressionist and Fauvist art movements. A lot of the artists I like come from this time — Gauguin, van Gogh, Bonnard, Vuillard, Matisse, Mary Cassatt.”

McClellan lives with his wife, Stephanie, daughter Sophie, 4, and  Ava Belle, 6, a bluetick coonhound. For more information, visit benevolenthound.org. Len Lear can be reached at lenlear@chestnuthilllocal.com