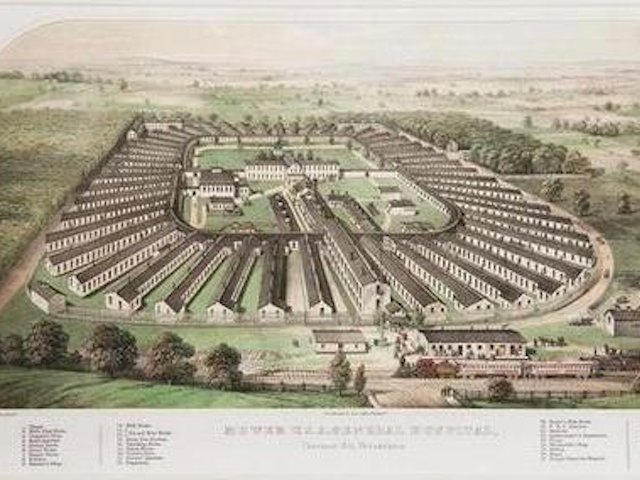 The marauding armies of the Revolutionary War were several generations back when the citizens of Chestnut Hill entered the U.S. Civil War with the construction of one of the largest hospitals in the country on the east side of the village.

When the Civil War was formally declared in April 1861, the suburban railway line later known as Chestnut Hill East had only been open for seven years. But it was to provide an essential access route for patients.

The country did not anticipate the scale of the war to come and the required supporting infrastructure. Both sides quickly worked to build up that infrastructure, including railroads, docks, barracks, warehouses and relationships with suppliers of all types.

As the country watched the earliest of the war’s many bloody battles, both sides also started developing medical facilities to grapple with the growing stream of wounded soldiers. At first, existing buildings were hastily converted into hospitals, including Germantown Town Hall, which opened as Cuyler Army Hospital in 1862 and was later expanded to 630 beds in temporary structures behind.

As the war ground on, purpose-built military hospitals were constructed, including Mower General Hospital in Chestnut Hill, which opened in January 1863 with 3,600 beds. It was named after Thomas Mower, a noted Army surgeon.

At that time, the area now known as the East side was mostly open farms and woods, with scattered houses and farm buildings. The Army chose 27 acres for the new hospital, adjacent to the new railway line. The site ran from the Chestnut Hill East line north to Stenton Avenue, and from East Mermaid Lane up to East Willow Grove Avenue.

The new hospital complex was designed by the young John McArthur, Jr., who later became famous for designing Philadelphia City Hall. He joined the war effort as the architect to the Quartermaster General’s department in Philadelphia and went on to design some 24 hospitals. The Philadelphia area was seen as particularly suitable to war hospitals because of its many existing railway lines.

At Mower, McArthur created a central core of administrative buildings surrounded by 50 radiating one-story barracks-like wings. That layout reflected contemporary best practice in institutional planning and echoed the layout of the famous Eastern State Penitentiary, which had been completed just 20 years earlier. At the hospital, the low-scale decentralized wards offered better ventilation and were believed to be more sanitary. The complex was also conveniently located to the recently completed water tower of the Chestnut Hill Water Company and featured a number of advanced medical features.

The hospital opened none too soon as some of the worst battles of the war came shortly thereafter, including the Battle of Gettysburg in May 1863 that killed 51,000 men and left countless others wounded.

The Civil War had a horrific impact on the young United States. In the previous decades, most military action had consisted of smaller-scale skirmishes along our western borders as landhungry European settlers fought with Native American tribes. The Civil War brought unexpected and unprecedented upheavals.

The lethal intersection of traditional battle strategies largely unchanged since the Revolutionary War with such recent advances in armament technology as the Minie bullet and the rifled musket resulted in catastrophically high numbers of battlefield dead and wounded.

Contemporary records are unreliable, but best estimates are that between 600,000 and 700,000 men were killed in the line of duty. That was about 2% of the population and still represents the highest number of deaths in any U.S. war, including World Wars I and II.

We are sadly familiar with the black and white photographs of the twisted bodies of dead soldiers on Civil War battlefields. But notably more men died outside of battle from their wounds, disease, malnutrition, bad water, and other ailments.

By the time it was closed in May 1865, Mower had served approximately 20,000 patients. Its success rate was surprisingly high, sending 9,799 men back into active duty and only losing 257 patients.

Mower Hospital was demolished shortly after the end of the war and the land eventually became part of the country house of Randall Morgan. After much wrangling, that house and its elaborate gardens later gave way to the Chestnut Hill Village and Market Square shopping center. But that is for another article.