Donald Nally will conduct The Crossing before a live audience Saturday, Sept. 11, 7 p.m. in the Presbyterian Church of Chestnut Hill. 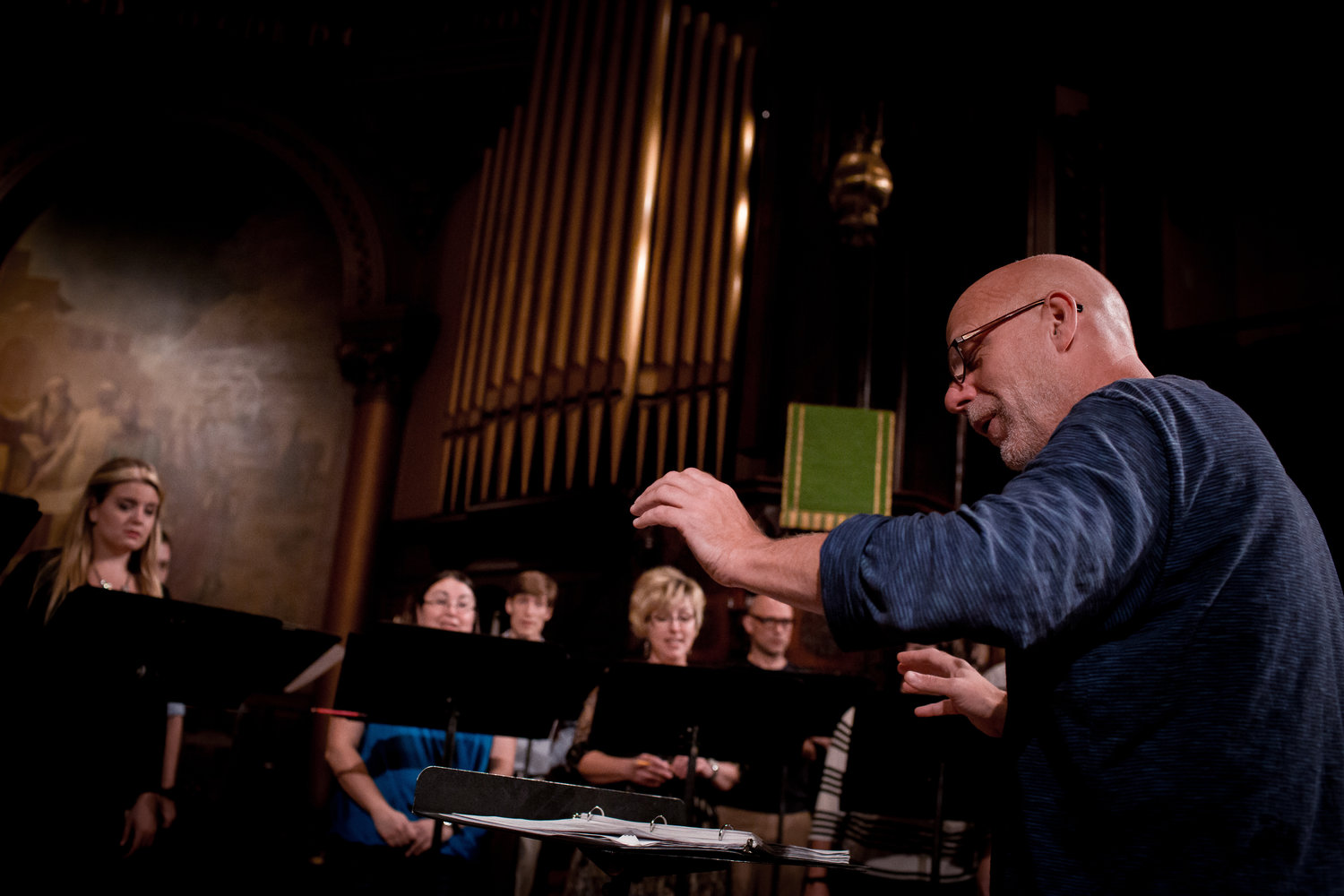 Donald Nally will conduct The Crossing  Saturday, Sept. 11, 7 p.m. in the Presbyterian Church of Chestnut Hill. This long-awaited “homecoming” concert, entitled “Returning,” will mark the 20th anniversary of the 9/11/2001 terror attacks on New York City, Washington D.C., and rural Pennsylvania.

Nally will lead a pre-concert talk in the Burleigh Cruikshank Memorial Chapel; a “homecoming” gathering in Widener Hall will immediately follow the performance.

The Crossing premiered Woods’ “Shift” digitally with film Nov. 2, 2020. The subsequently expanded version premiered at The Crossing’s “Month of Moderns” in June of 2021. That performance was reprised at the chorus’ residency at the Warren Miller Performing Arts Center, Big Sky, Montana, in August.

Gilbertson’s “Returning” is loosely based on the biblical story of Jonathan and David, exploring what draws one human to another. It reflects the theme of The Crossing’s season: “return/emerge/remember.” Esenvald’s “Earth Teach Me Quiet” is featured on the choir’s critically acclaimed “live” album “Rising w/ The Crossing,” named NPR’s December 2020 “album of the month”

The program continues with two movements, the “Gloria” and “Agnus Dei,” from Primosch’s “Mass for the Day of St. Thomas Didymus,” written for The Crossing in 2014 and featured on the album “Carthage.” The concert’s final work is Tavener’s “Funeral Ikos,” a score that harks back to the ensemble’s beginnings and its residency at the 2007 Spoleto Festival in Italy.

Speaking of the concert, Nally explained, “’Returning’ is a celebration of works we love, sung with artists and for people we love, marking a time of isolation, grief, confusion, hope and returning. We chose the title from Michael Gilbertson’s work of the same name, which asks the question, ‘What knits us to the soul of another?’

“That question has followed us through the pandemic,” he continued, “sometimes guiding, sometimes haunting, sometimes revealing. In our September 11th concert, on the 20th anniversary of another painful national event, it is the string that threads together our concert.

“Michael’s music ranges from the most nuanced intimacy to explosive unleashed energy – all about love, which also inspires the music of Eriks Esenvalds’ prayer, ‘Earth, teach me quiet,’ and John Tavener’s solemn yet celebratory ‘Funeral Ikos.’

Nally continued, “We will celebrate the life of Philadelphia composer Jim Primosch with two movements of the Mass he wrote for us, and we will look back to the pandemic through the work we intended to sing at Carnegie Hall in March of 2020 (Michael Gordon’s ‘Travel Guide to Nicaragua’) and Ayanna Woods’ exhilarating ‘Shift,’ written specifically during isolation and capturing the social unrest of our time.

“Joined by piano, cello, marimba and organ,” Nally concluded, “the 24 voices of The Crossing are so ready to sing in Chestnut Hill for our home audience for the first time in 20 months!”

When I started writing classical music reviews in 1976, I took a decidedly “classical” listen to the music being performed by the ensemble I heard. I wasn’t always particularly sympathetic to groups that regularly performed contemporary classical music.

That attitude took a decided turn in 2005, when I first heard Nally conduct The Crossing, the successor ensemble to the Bridge Ensemble. All of a sudden, I found myself loving contemporary classical choral music. Of course, the splendid renditions given this repertoire by Nally and his choristers didn’t hurt. All the same, and through his flawless choice of music to perform, I came to look forward to each and every new program Nally and The Crossing offered – particularly when it was scheduled to be heard within the clear yet resonant acoustics of Chestnut Hill Presbyterian Church.