The USPS is broken, say local members of Congress

The USPS is broken, say local members of Congress 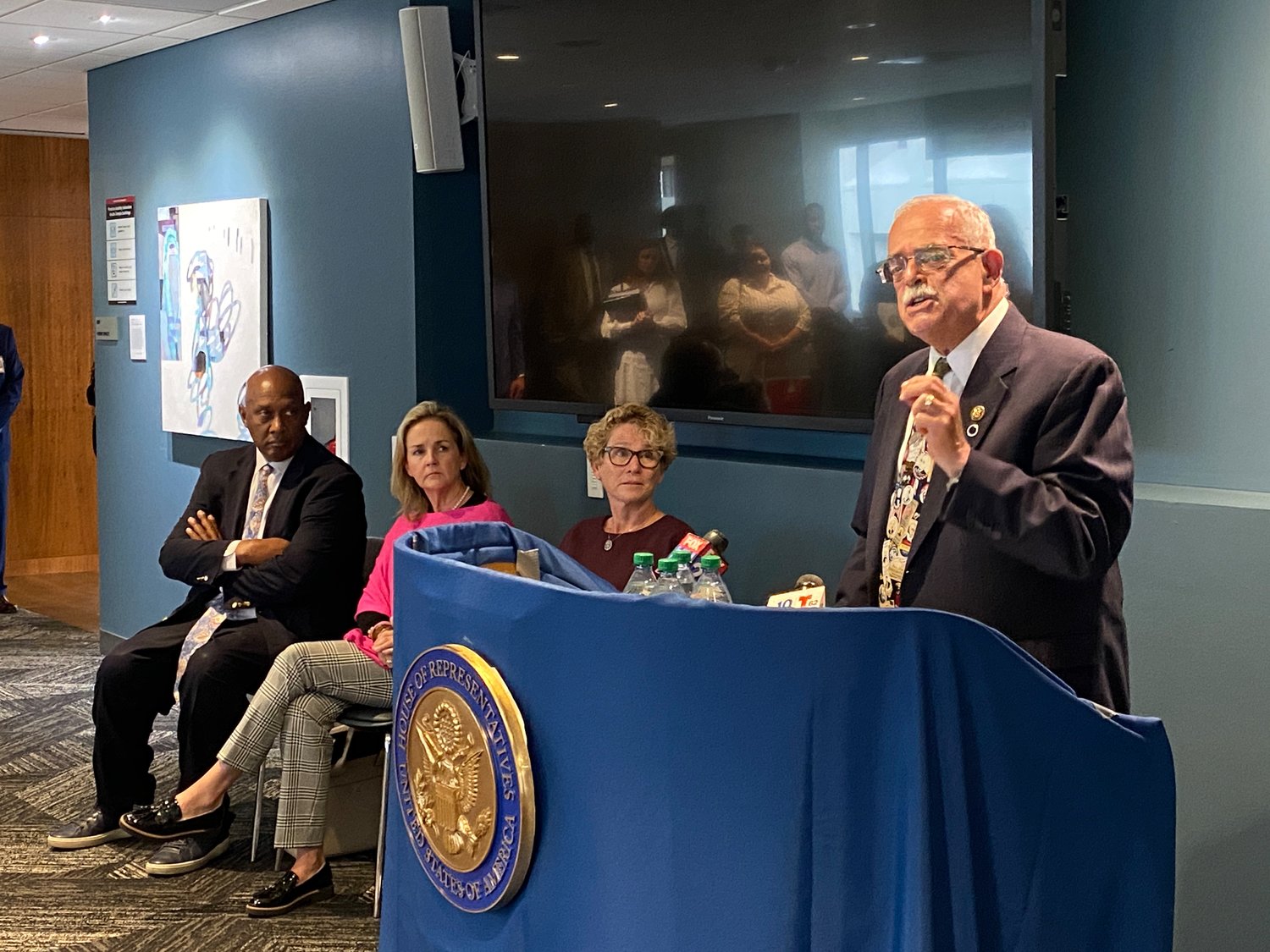 From left, U.S. Reps. Dwight Evans, Madeleine Dean and Chrissy Houlahan, all of Pennsylvania, listen as Rep. Gerry Connolly, of Virginia, chairman of the House Subcommittee on Government Operations, discusses the U.S. Postal Service at a hearing last week in Philadelphia.
Photo by Tom Beck
Posted Wednesday, September 14, 2022 12:00 am
by Tom Beck

When Philadelphia’s congressional delegation met at a special hearing at Temple University last week to ask representatives of the U.S. Postal Service why mail service has become so bad, they all wondered: why does Postmaster General Louis DeJoy still have his job?

Northwest Philadelphia is not alone in experiencing a steep decline in mail service – from a rampant increase in stolen and washed checks to mail simply not being delivered on any consistent basis in Germantown. Since the beginning of the year, the Local has interviewed dozens of residents from Chestnut Hill, Mt. Airy and Germantown who have complained of these Postal-related issues.

“It's very distressing and upsetting,” one Chestnut Hill resident told the Local in June. “Can I not mail anything anymore? I don’t trust mail. I don’t even trust the sanctity of the banks. I can’t even trust checks.”

“Louis DeJoy, you are no Benjamin Franklin,” Congressman Brendan Boyle, who represents parts of Old City, North Philadelphia and Northeast Philadelphia, said at the hearing, evoking the country’s first postmaster general. “There is a reason why I and others of my colleagues have called for his termination. I reiterate that today, we need change at the very top of the Postal Service.”

“The leadership has not been performing his responsibility,” Evans said. “Obviously change is necessary.”

All Representatives who attended the hearing made it clear that the postal problems in Northwest Philadelphia were not unique. Instead, they were part of a larger national trend.

“In my district,…we have seen an increase in mail theft and widespread delayed and undelivered mail,” said Congresswoman Eleanor Holmes Norton, who represents Washington, D.C.’s lone congressional district. “I've been contacted by constituents who have had their checks stolen from the mail and altered and thousands of dollars taken from their accounts.”

According to Virginia Congressman Gerry Connolly, who serves as chairman of the Congressional subcommittee that oversees the Postal Service, robberies of mail carriers more than tripled from 2018 and 2021, and there were four times as many robberies involving a gun.

It’s not uncommon for mail carriers to be robbed for their arrow keys, which they use to open the nation’s ubiquitous blue collection boxes. Each key works on all boxes located in a particular zip code. In March, a USPS mail carrier working an overtime shift in Mt. Airy was nearly robbed of his arrow key when two men held him at gunpoint at the corner of West Johnson and Cherokee Streets.

Frank Albergo, national president of the Postal Police Officers Association, argues that the proliferation of violent crime against mail carriers really took off in 2020, which is when postal police officers (PPOs) were taken off the streets. Prior to that, they had patrolled streets like police officers, with a mission to keep letter carriers safe and deter crime.

“Until the summer of 2020, the Postal Service used PPOs as a crime-prevention and response force on letter carrier routes and public streets,” Albergo testified at Wednesday’s hearing. “Despite the obvious success of postal police patrols, on August 25, 2020, Postmaster General Louis DeJoy and his Chief Postal Inspector Gary Barksdale, stripped postal police officers of their law enforcement authority and began gutting the Postal Police Force.”

Banks, which reimburse clients when a fraudulent check is cashed or deposited, are angry over the losses they’re seeing - especially small banks. According to American Banker, a banking information website, many small banks feel they’re being bullied by large banks into accepting the losses.

“They’re fighting amongst themselves over who reimburses the clients – the bank that initially cashed the check or the account that issued the check,” Albergo told the Local.

And those people who are unfortunate enough to be victimized must deal with the hassle of getting their money back and changing their account information, which means rerouting all their automatic payments to a new account.

“Americans are suffering,” Albergo said. “Their mail is not safe. Their checks are being washed, their accounts are being drained and the Inspection Service is not doing much about this.”

Gary Vaccarella, district manager for the postal district that includes eastern Pennsylvania, blamed the pandemic, among other things, when he testified at last week’s hearing.

“Allowing PPOs to patrol the streets would not decrease mail theft or robberies or improve letter carrier safety,” he said.

Peter Rendina, deputy chief postal inspector at the U.S. Postal Inspection Service headquarters in Washington D.C. told lawmakers that the agency is “looking to use technology to make it less valuable to have one of these arrow keys.” He would not comment further about the technology.

Federal Reserve data shows that the total volume of written checks has decreased steadily over recent years, but the average value per check has increased.

Who is being held accountable?

Not many, it seems.

Connolly said he had data showing that only .5 percent of the 300,000 constituent complaints were investigated in the last reporting period.

“Your chances of being investigated, being prosecuted, being pursued, being convicted and ultimately serving any kind of either jail time or compensation is close to nil,” he said. “And that is a very dangerous situation.”

Albergo said that since there are only 1,300 postal inspectors, that adds up to about 1.2 arrests per inspector. Worse, he said, is the fact that some of those arrests weren’t even made by postal inspectors.

“If the Philadelphia Police Department makes a mail fraud-related arrest, the Postal Inspection Service can claim they made the arrest, even if they didn’t because it's postal-related,” he said.

“It’s almost like we made this decision and now we’re stuck with it, so we’re just going to stick to it,” said Albergo, referencing the decision to take postal police off the streets. “I’m assuming that it’s completely backfired and they think admitting that they made a mistake would make them look stupid and they’re just doubling down on being stupid.”

According to Congresswoman Mary Gay Scanlon, the Philadelphia region is experiencing some of the worst rates of on-time mail delivery in the nation with an on-time rate of just 61.9 percent in the third quarter of fiscal year 2021.

Delivery rates have improved nationwide and in Pennsylvania, she observed, but that’s because last year the Postal Service changed the definition of “on time” for first class mail. Instead of delivery within two to three days of shipment, it now means delivery within four or five.

“The goal posts were moved,” Scanlon said. “So, when we're comparing statistics to yesteryear, we're not comparing apples to apples.”

In a press release, the Postal Service attributed the change to “changes in the market for mail and standards that are not based on delivery distances.”

Further complicating timely delivery is that DeJoy has taken more than 600 pieces of mail processing equipment out of the postal system. The removal of the machines was likely planned since before DeJoy’s tenure, according to documents viewed by Motherboard, an online magazine. But, in an August 2020 Congressional hearing, DeJoy said they wouldn’t be replaced because they’re “not needed.”

“That was firepower,” he said at the hearing. “And that's going to impact the Postal Service forever in trying to maintain service standards because now we just don't have that capability to process that amount of mail.”

The Congress members who attended the hearing were left wondering why they didn’t get answers.

“When we take a look at what's going on in this organization that we're charged with having oversight on, something's wrong with the management and at the minimum that should be something that we continue to pursue,” said Congresswoman Chrissy Houlahan. “Even if you set aside his politics and his stated purpose, [DeJoy] is not doing a good job doing the things he's been hired to do.”

“Louis DeJoy has been a disaster as postmaster general,” said Boyle in a post-hearing press conference. “An absolute disaster. I have reason to question to what extent he wants the Postal Service to maintain its reputation as a postal service that has the support of more than 90% of the American people.”

Connolly said he thinks that DeJoy was actually trying to undermine the Postal Service.

“He did everything he could to disrupt confidence in the mail service,” he said “Retiring machines, consolidating services, pickups being delayed, not having extra trucks if they have overflow mail put it to the next day - all of that delayed service and all of that eroded public confidence in the middle of a pandemic.

“I never forgot that,” he continued.”If you start the job doing that, you see it as your mission to erode public confidence in elections and the role of the USPS in those elections, you've eroded confidence in your leadership.”

Norton said that while nobody knows what the future holds for DeJoy or for the agency he is running, one thing is clear.

“The public's confidence in the Postal Service, a critical Institution, has been shaken,” he said.