Anne Krawitz, who runs AKA Bindery in West Mt. Airy, is one of only two independent studios left in the city that still bind books by hand. 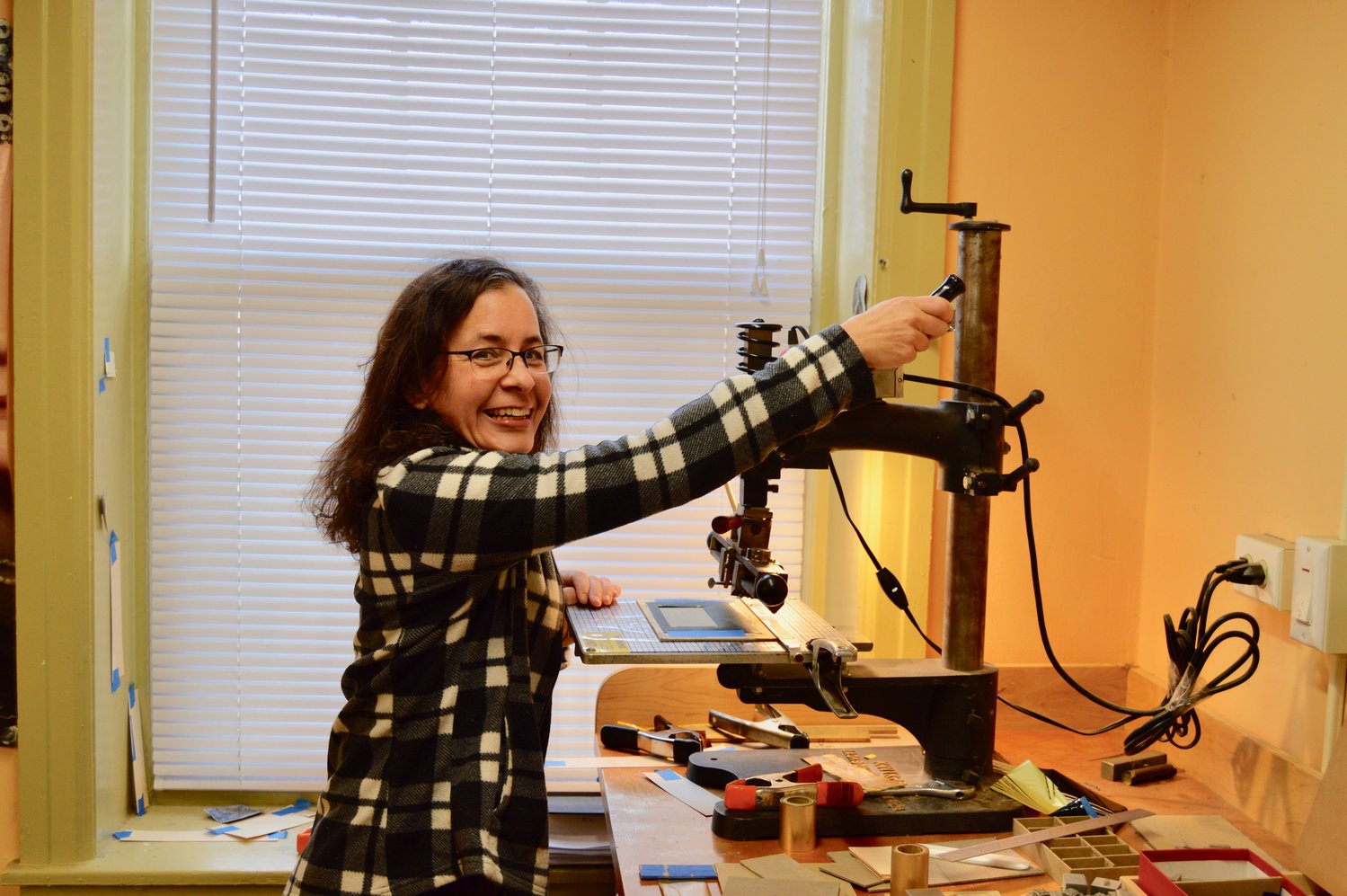 Mention the word “bookbinder” to any longtime Philadelphian and they will almost certainly think of Old Original Bookbinder's restaurant at 2nd and Walnut Streets, which closed in March of 2009 after 120 years in business. Its walls were festooned with photos of celebrities, even presidents and movie stars, who had visited.

However, there is another kind of bookbinder that is still alive. Anne Krawitz, who runs AKA Bindery in West Mt. Airy, is one of only two independent studios left in the city that still bind books by hand. (The other one is David Donahue in Bella Vista.).

Krawitz, who started her career in book restoration and conservation, shifted her focus 10 years ago toward custom clamshell boxes for books and has worked on thousands of volumes. When asked how she stays afloat in these difficult times, she said, “Really good clients that stick with you and a really good product.”

Krawitz was born on Long Island, grew up in Tampa, FL, earned a bachelor’s degree from the University of Massachusetts in 1986, and a master’s degree in writing from Vermont College of Fine Arts. In between she studied bookbinding at Guildford College of Technology in England.

“An itinerant childhood meant I wasn't really from anywhere,” she told us, “but after almost 30 years in Mt. Airy, I consider myself from Philadelphia.” Her husband and business partner, Carlton Harris, who was born and raised in East Falls, also owns and manages real estate.

Krawitz apprenticed with a bookbinding legend named Bill Streeter In Northampton, MA, from 1986 to 1987. “He told me, 'Don't let the turkeys get you down,'” Krawitz said, “and the other thing he always said was 'You're right where you need to be.' Simple but invaluable words for someone young and impatient to figure out their place in the world.”

A professional bookbinder since 1989, Krawitz was an intern at the Folger Shakespeare Library in Washington, D.C., in 1994. She has owned and operated her business since 1990.

Professional bookbinding is not exactly something many children think about doing when they grow up. How did it happen for Krawitz?

“During college I lived next to a woman who briefly worked for a bookbinder,” she explained, “This idea that books were bound intrigued me.”

After graduating from college, Krawitz traveled to Ireland. And after a month abroad, someone told her to meet with Bill Streeter, who at that time was one of 17 bookbinders in western Massachusetts.

“When I told Bill I wanted to learn bookbinding, he offered me a seat at one of his benches,'' she said. “Bill was an amazing human being. Most people who came in contact with him became charmed and enamored by his unique Yankee spirit.

“At his memorial service, one of his students said, 'If Bill had been a car mechanic, I would have become a car mechanic,’” she continued. “Same for me, although I love books, not cars.”

Krawitz said it was Streeter who helped her discover how much joy there was in working with one’s hands.

“I think it was a combination of my love for books as companions and my joy of finding big-hearted Bill that kept me focused,” she said. “We treated everything we found in a book like it was archeological dig: type of leather, colors in the endbands, how it had been sewn, what kind of thread and sewing supports were used. Bookbinding melds history and functionality with beauty. After that experience, I was hooked.”

Krawitz' clients have included Friends Historical Society at Swarthmore College, the Fleischer Music Collection at the Philadelphia Free Library, The Union League, many historical societies on the East Coast and numerous book dealers and private collectors.

A spokesman for Bauman Rare Books in Center City told us, “Anne Krawitz and the rest of the team at AKA Bindery have been a reliable partner to us for nearly two decades. We have multiple clients who insist that we use them to build custom storage boxes for the finest books in their collections.”

Marc Kuritz, a collector of Winston Churchill books, said, “Seldom does genuine skill and talent align with timeliness, professionalism and reasonable cost. This explains why I have been working with AKA Bindery for years.”

For more information, visit akabindery.com. Len Lear can be reached at lenlear@chestnuthilllocal.com