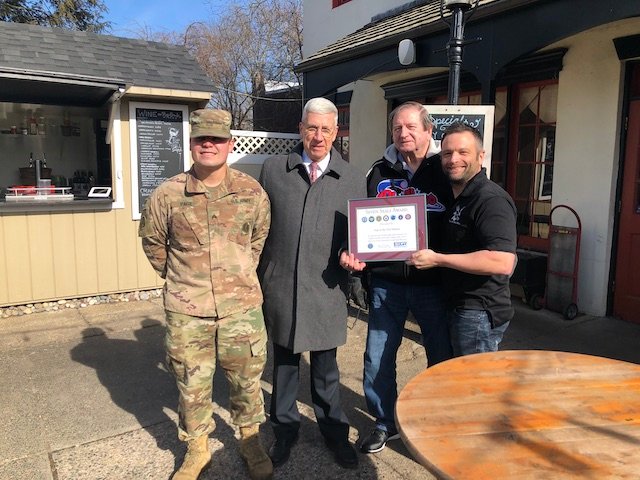 Gangloff, 37, of Clayton, New Jersey, was presented with the award in recognition of his “meritorious leadership and initiative” in supporting the members of the National Guard and Reserve.

The award is symbolic of the seven services: Army National Guard, Army Reserve, Navy Reserve, Marine Corps Reserve, Air National Guard, Air Force Reserve and Coast Guard Reserve. It is the broadest and most inclusive award given by the ESGR.

Sgt. Damon Page, a Top of the Hill employee and a member of the United States National Guard, said Gangloff has always been very proud of the Armed Forces. Page served two tours – one in Operation Enduring Freedom in Afghanistan and one in in Operation Inherent Resolve in Syria.

Page, 26, of Abington, said Gangloff is very proud of the Armed Forces and never gave him any problems about taking time off for leave.

“I pride myself on considering everyone who works with me family,” Gangloff said. “Damon has worked for me for about three years, and in those three years, he has been a wonderful asset to the company.”

Craig said the Seven Seals Award is “significant” because it shows “support above and beyond what is required by the USERRA (Uniformed Services Employment and Reemployment Rights Act) law. He said Charles accommodated Page’s schedule to accommodate his military training and promoted him “as soon as” he returned from a nine-month overseas deployment.

Craig, a Chestnut Hill resident, said Charles told him he wants to hire more members of the Guard and Reserve because “these military types make great employees – they’re on time, respectful and industrious, and I need more of them!”

“It is vitally important that our employers support their employees in the Guard and Reserve,” Craig said. “They are needed to fight and win our nation’s wars and protect the Commonwealth in times of disasters. The active component military is about one-third the size it was 30 years ago, and the Guard and Reserve are needed to take up the shortfall. That is why they have been so busy these last 15 years.”

While Gangloff is not a veteran, his family has a long history of serving in the military.

His father, Charles Gangloff Jr., served in the Navy as a third-class petty officer/engine man in the Vietnam War. His mother, Mary Gangloff, worked for the Naval Publications and Forms Center, commissioning ships. Both his uncles were second-class petty officers and avionic electricians in the Navy, and both his grandfathers, Charles Gangloff Sr. and Kenneth Sherman, served in World War II. His uncle, Frank McFadden, also served in the Army Reserves.

“Lee Page, Damon’s father and my cousin, served in the army as a Paratrooper then National Guard for 24 years, attaining the rank of First Sergeant serving a tour in Korea,” Gangloff said. “I myself am not a veteran, but just like in small business, I believe the family aspect is extremely important.”

SCH teacher to open new bookshop on the Avenue in September

Apr 15, 2021 issue
Crime Report: 3 thefts from vehicles and a stolen car
The following crime report is for crimes reported in Chestnut Hill and Mt. Airy for the period between April 5 to April 11. Some dates earlier than the current period took place at that date and …
Letters: Current development projects imperil fabric of Chestnut Hill
Too often, our culture obsesses over the present. What is now is all that matters.

Stellar reporter/author at Mt. Airy Zoom book event
For years, every time I saw the byline Natalie Pompilio in the Philadelphia Inquirer, I would make it a point to read the story. I knew it was bound to be a compelling human-interest story.

Gardens help children combat 'nature-deficit disorder'
How should a children’s garden grow? Local professor Lolly Tai knows, and she shares what she’s learned in “The Magic of Children’s Gardens: Inspiring Through Creative Design.”