A selection from Akashic’s regional noir series (Photo by Hugh Gilmore)[/caption] by Hugh Gilmore Looking for more titles by the Irish crime writer, Adrian McKinty, I found a story collection … 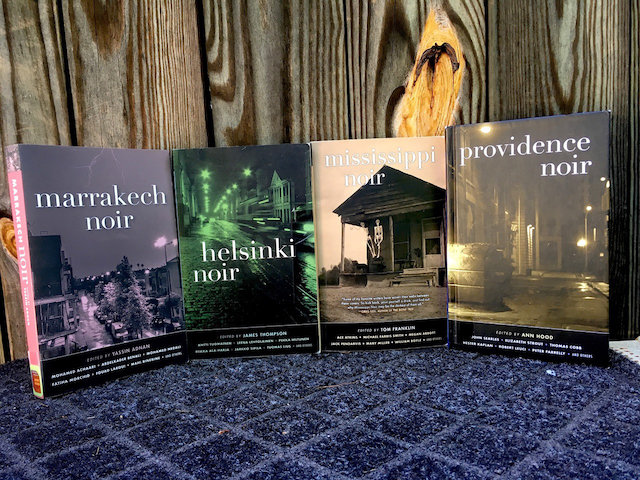 Looking for more titles by the Irish crime writer, Adrian McKinty, I found a story collection he’d assembled (with Stuart Neville) called “Belfast Noir.” Its 14 authors covered the range of Belfast crime writing in a convincing way. A few concerned “The Troubles,” of northern Ireland, but most were down and dirty contemporary crime stories. A good, quick read, published by Akashic Books out of Brooklyn.

In the publisher’s list I saw “Montreal Noir.” Why not? I was heading there anyway. I took the Kindle version along. With the Irish book, I’d wanted to know what life was like in Belfast nowadays. The Montreal book, however, captivated me because the crime stories came with street names, locations and neighborhoods I knew, so I was doubly intrigued. A dimension of Montreal, inaccessible even to a 20-year repeat tourist such as myself, suddenly revealed itself. I felt a retroactive shiver recalling some of the streets I’d walked down and alleyways I’d short-cutted through on my wanderings.

When I finished up that book in Montreal, all too soon, I looked at the publisher’s list again. I saw “Marrakech Noir.” The blurb said it would reveal “the linguistic, cultural, religious, and ethnic reality of Marrakech … and a new generation of crimes.” One of the great takeaways for noir books is that you learn as much about the places depicted as you do about the people – kind of a dark Fodor Guide. I ordered it right away.

Here’s one good reason why fans of noir literature love it: Everywhere in the world, no matter what the Chamber of Commerce tells you, nasty doings are going on behind the gleaming monuments and welcoming billboards. Knowing that keeps us all amused and forewarned.

The founder of Akashic Books is Johnny Temple, former bassist of the band “Girls Against Boys.”

Temple says on his Facebook page that the company is “dedicated to publishing urban literary fiction and political nonfiction by authors who are either ignored by the mainstream, or who have no interest in working within the ever-consolidating ranks of the major corporate publishers.”

Beneath Akashic’s logo lies: “An independent publisher dedicated to reverse-gentrification of the literary world.”

It formula: It finds or accepts proposals from authors who are experts in a local crime writing scene. It in turn solicits original short stories from local writers. Each book has a brief introduction that attempts to summarize the local noir landscape and then presents 15 original short stories. At the end, author bios and pictures make a pleasant addition. Its approach seems limited only by the number of cities or regions in the world.

Temple says, “Irreverence, an attraction to dark themes, passion for social justice” shape Akashic’s aesthetic. In a 2004 interview in the L.A. Times, Temple said, “We need language to open up and flourish, to discover the dark sides of the psyche, because we obviously live in a really confused and messed up world, and literature should take close looks at why the world is the way it is. Literature needs to be very, very honest – more honest perhaps than it’s been in recent years.”

Hugh Gilmore lives in Chestnut Hill. He is the author of a noir novel, “Malcolm’s Wine,” a collection of old books stories, “Scenes from a Bookshop,” and “Redneck Noir: A Personal Journey.”