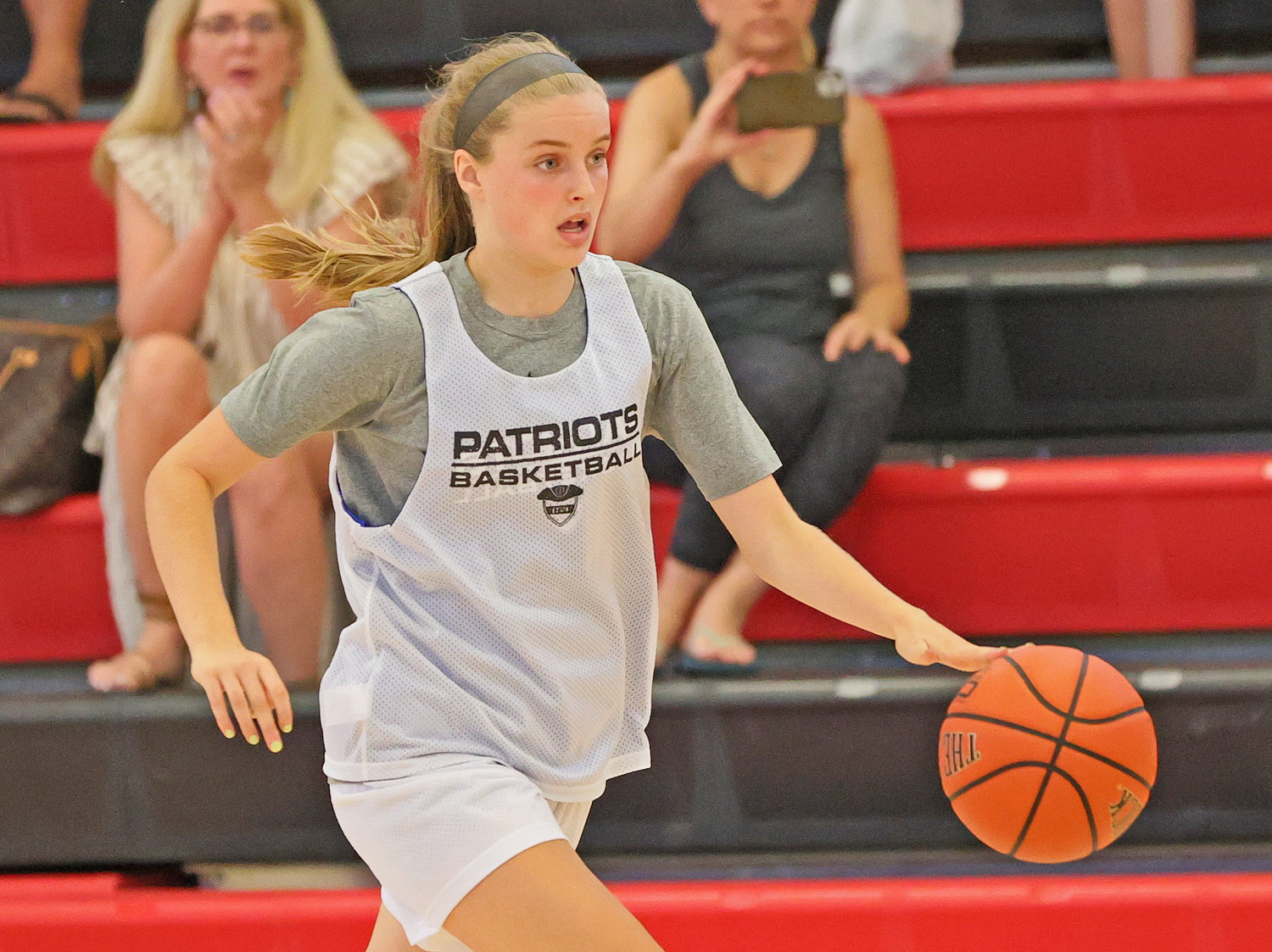 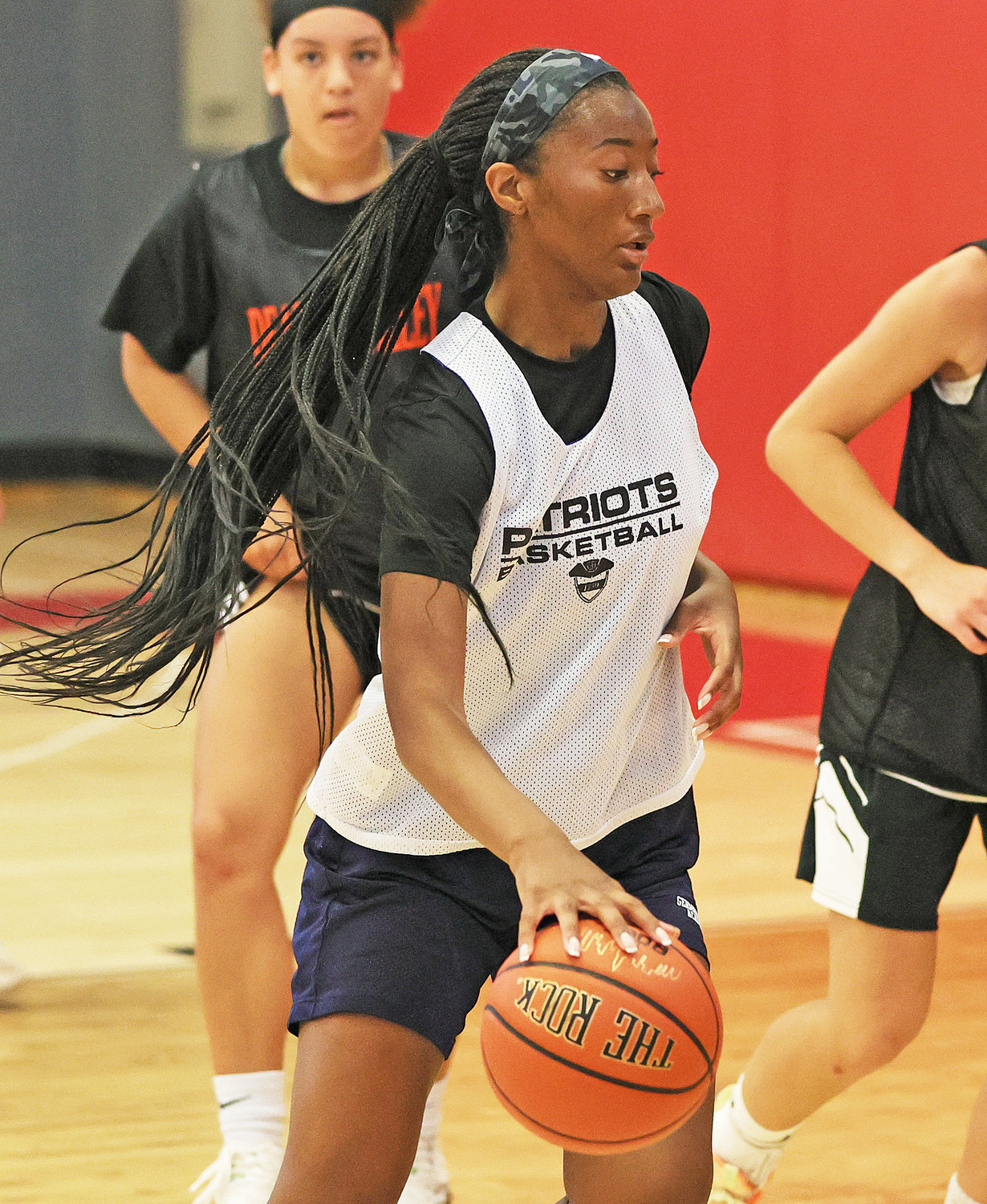 Out of the corner of her eye, GA junior Kendall Bennett looks for a seam in the opposing defense. (Photo by Tom Utescher)
Previous Next
Posted Thursday, July 8, 2021 10:00 am
by Tom Utescher

In high school summer basketball action last week, Germantown Academy's two games on Tuesday evening presented a study in extremes. Starting off by facing Perkiomen Valley High School, the Patriots fell behind early and were trailing by 10 points midway through the second half. The rest of the way, GA elevated every aspect of its game to pull out a 32-29 victory.

In the second contest, the scoreboard operator was instructed at halftime to add no more points to GA's side of the board.  This was because the Patriots went out to a 32-4 lead over Springfield (Montco) High School during the first half.

Against Perk Valley, two short jumpers by rising junior Josie Munson helped the Patriots go ahead 6-2, then the Vikings answered with nine straight points to hold the lead in the middle of the first half. A little later, a jumper by sophomore Jessica Aponik helped Germantown edge ahead, 12-11, but then the Pats allowed another run by Perk Valley, which rattled off seven straight points.

With five seconds to go in the first half, GA closed up the score to 15-18 thanks to a three-pointer from the right wing by Gabby Bowes, one of the rising freshmen in the program who definitely look ready for high school ball. Her successful three-point shot was an exception in the first half for the Patriots, who flung up a number of off-target outside shots almost as soon as they got into their half-court offense. Another problem was that the Pats were frequently getting the ball stripped away by the Vikings.

Scoring on a follow-up, junior post Kendall Bennett got GA within one point of the leaders as the second half commenced, but another offensive run eventually resulted in Perk Valley's biggest lead of the evening, at 27-17. GA called time-out with 9:49 left to play.

Head Coach Sherri Retif must have given her Patriots one heck of a peptalk, since they came back out on the floor and completely turned the game around. The resurgence began with back-to-back drives to the hoop by Aponik and Munson. Bennett, freshman Jessica Kolecki, and sophomore Sam Wade also contributed to the scoring as Germantown posted 15 consecutive points for a 32-27 advantage.

At the same time, the Patriots did a better job defending against Perk Valley’s outside shooters, while also making it harder to penetrate into the paint. In the closing seconds, the Vikings launched a three-point attempt that was well short of the hoop, but in the scramble for the rebound one of their players was fouled. The last two points were scored from the free throw line for the 32-29 final.

Balanced scoring for the winners produced six points apiece for Munson, Aponik, and Kolecki and four points each for Bennett and sophomore Madison Kerest. Bowes finished with three points, sophomore Izzy Casey had two, and Wade added a free throw.

In the second game, it quickly became apparent that Springfield had no answer for the greater physical size of the GA team. Bennett had four field goals as the Patriots jumped out to a 10-2 lead. When the half ended with a 32-4 tally favoring Germantown Academy, the home side of the scoreboard was left alone for the rest of the game. GA made extra passes on offense before shooting during the second half. Springfield more than doubled its total to wind up with 11 points, but overall, the Spartans were just overmatched in terms of personnel.