In 2015 an elderly typewriter expert started a  sales/repair business and instead of rent, he paid Pamela Rogow in typewriters. When he moved out in 2017, Rogow had 60 typewriters. 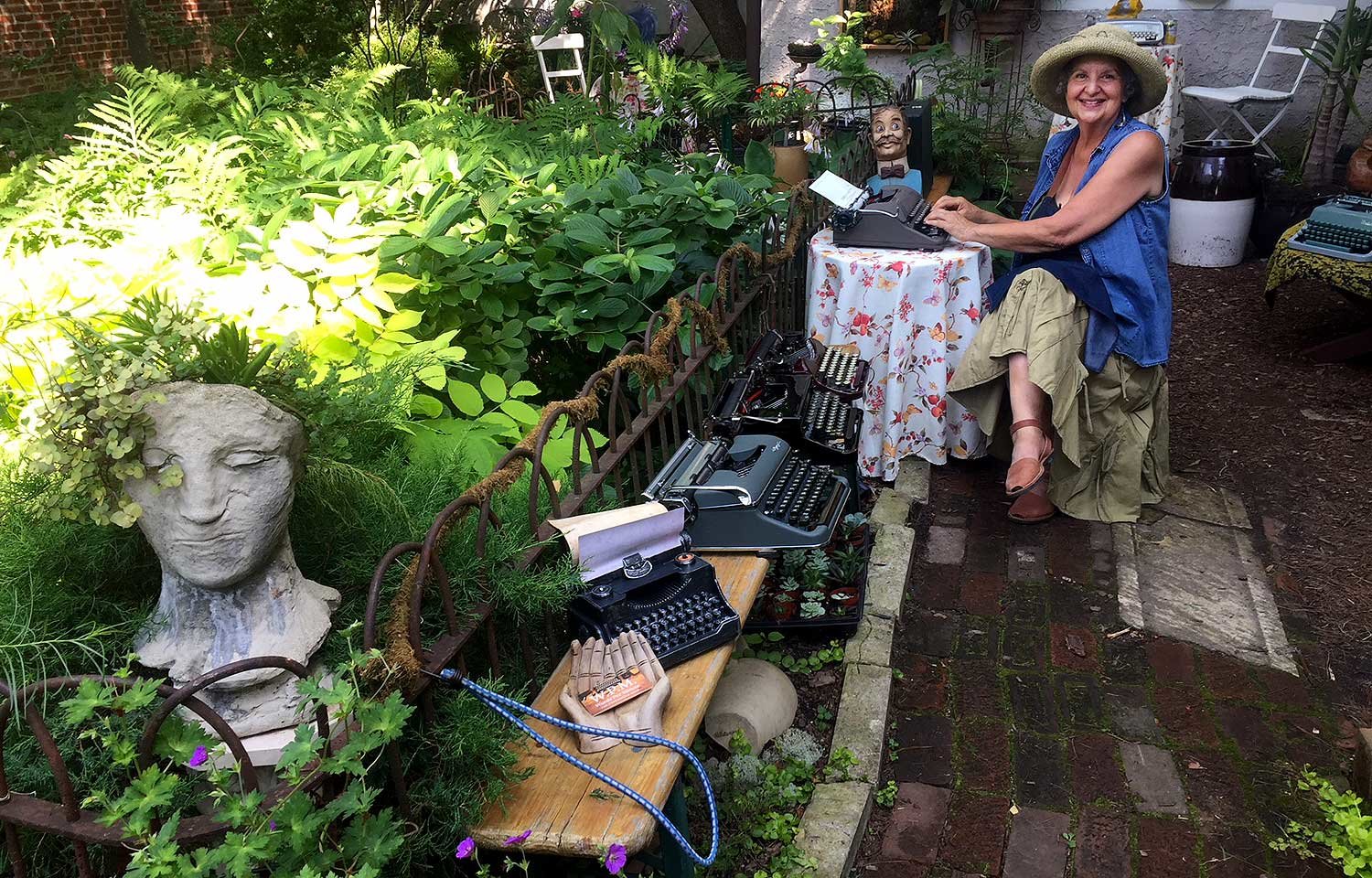 When Pamela Rogow could not have customers in her typewriter shop last year, she pivoted and moved the shop to her 1,750-square-foot garden. 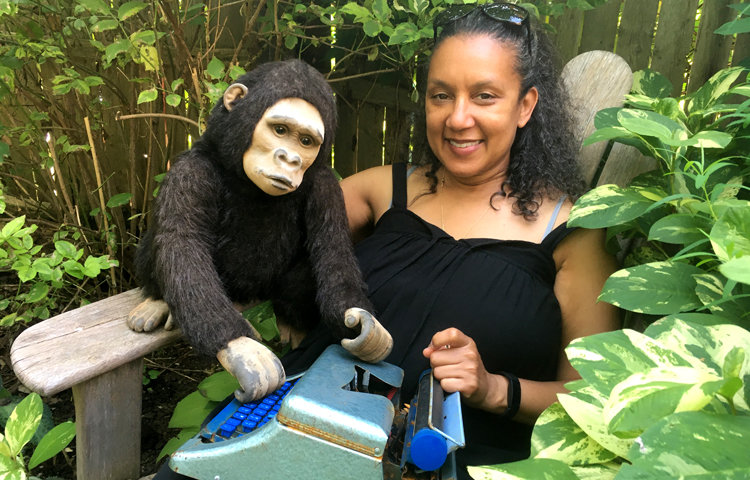 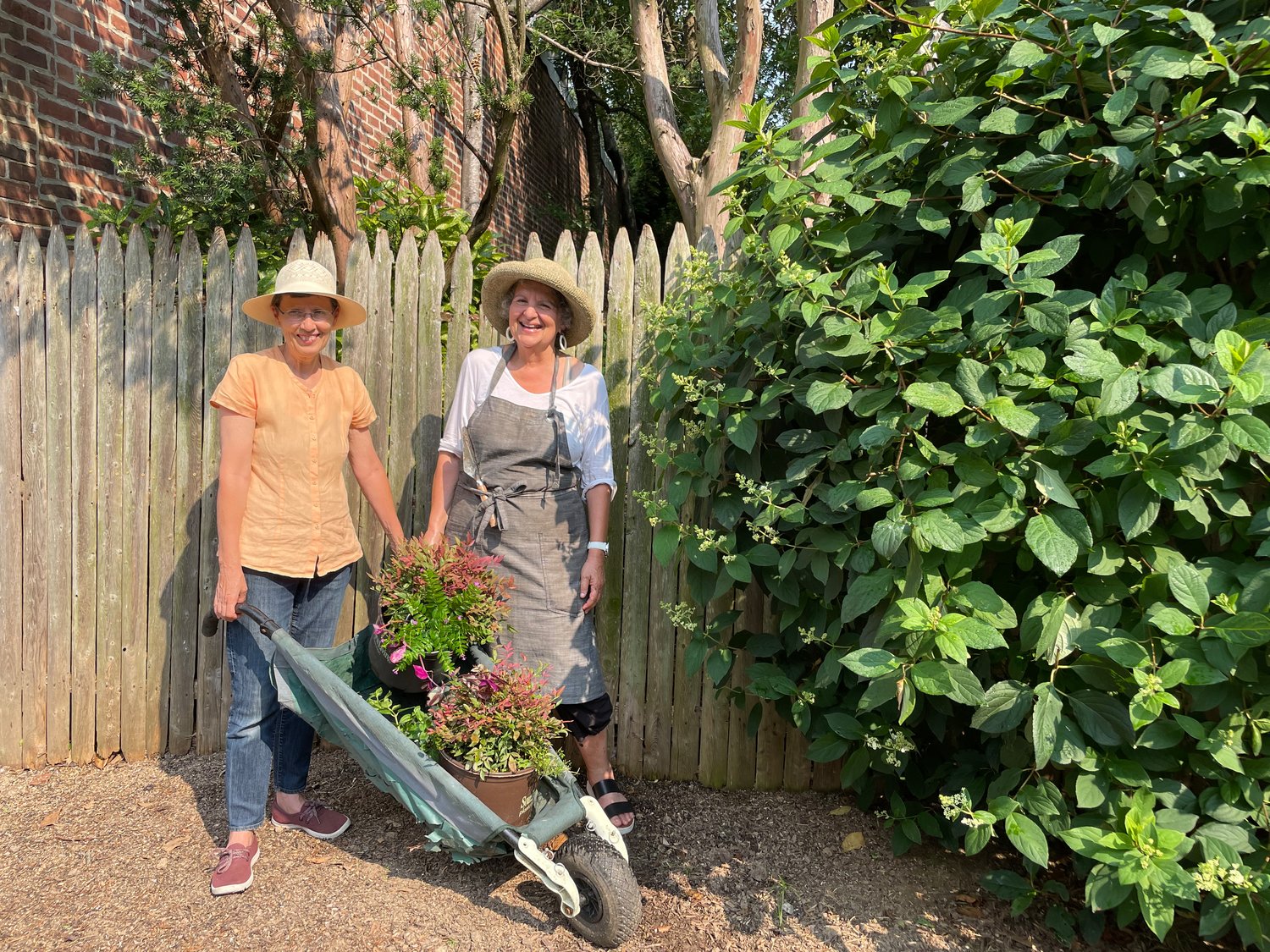 When I got my first newspaper job in 1967, one of the first things I did was go to a used typewriter store at 10th and Chestnut Streets and buy a 1914 Underwood typewriter for $15. It was a large, heavy machine that I sometimes put in the trunk of our car and lugged up to hotel rooms when we would go for getaway weekends to Lancaster County or Hershey. I definitely got some stares and eye-rolls in hotel lobbies. I wrote articles and letters on it for more than 35 years.

As we all know, computer keyboards and cell phones have pretty much replaced typewriters, and most young people today have never used a typewriter — and have probably never even seen one in person — but one long-time Mt. Airy resident is doing everything she can to change that narrative.

Pamela Rogow will be remembered by many localites as the founder of Moving Arts of Mt. Airy, a community-based “school” (similar to Mt. Airy Learning Tree but much smaller), which lasted for 16 years until 2013 at 6819 Greene St. (at Carpenter Lane). In 2015 an elderly typewriter expert started a  sales/repair business in that location, which is zoned commercial, and instead of rent, he paid Rogow in typewriters. When he moved out in 2017, Rogow had 60 typewriters.

Today Rogow, who declined to state her age, insists she has almost 1,000 typewriters, enough to open a museum. The oldest one is a Hammond from the late 1800s. (The typewriter was invented by an American, Christopher Latham Sholes, in 1868.) Where did they all come from? “I do everything but rob graves to get them,” said Pam. (Do people really bury typewriters in graves?)

Rogow is a Los Angeles native and UCLA film school alumna who ran her own design firm, Rogow & Bernstein, for 14 years in L.A., producing many projects like museum exhibits, river walks and history shows. In 1991 she came to Philly to take a position at the Academy of Natural Sciences, and in 1994 she bought the building that now houses her home and business. In 2008 it housed a home supply store, Environmental Homestore, that later expanded in Doylestown. In 2009 her property was also home to PHEW (Philly Electric Wheels), the region's first electric bicycle store that later expanded to a larger facility nearby.

In 2017 Rogow opened the W.P.M. (Words Per Minute) Typewriter Shop. She sells the typewriters, and even rents them for a month at a time. About a third of her business is repairs.

Customers come mostly from the internet and some from other states. Pam also teaches touch-typing to children and adults.

“I get amazing stories all the time,” she said, “and it's not just old people. My grandchildren, who are six and nine, have typewriters. I thought I'd be bored to teach touch-typing, but it turns out to be fun. People learn quickly. I will start with children as young as eight.”

Rogow has had typewriters that write in several languages with other alphabets such as Japanese and Hebrew; that have only capital letters (they were used for telegrams); that have only large letters for TV cue cards; and other highly specialized models.

When Rogow was not able to have customers in the shop last year because of the pandemic, she pivoted and moved the shop to her 1,750-square-foot garden. Weather permitting, customers can check out about 20 typewriters exhibited on benches and tables, framed by eye-catching flowers, plants and nearby birdhouses, lights, toys and a calming pond. The whimsical cachet is something you might expect to see in a place like New Hope. Rogow said, “I am so grateful to Ashley Gehman, garden and industrial designer, John Bertolino, handyman supremo, and Todd Young, typewriter mechanic expert,” for their contributions to the WPM enterprise.

“Many people sense that the considerable time they spend looking at screens comes at a cost,” said Rogow. “This is the antidote to that cost, another way to express yourself. It contributes to the energy of Mt. Airy Village.” (Rogow was one of those who created the annual Mt. Airy Village Fair 10 years ago.)

Rogow also allows area musicians to play in the garden by themselves or for audiences, small or large, of friends and local residents.

For more information, visit wpmtypewritershop.com. Len Lear can be reached at lenlear@chestnuthilllocal.com