"Ruined" and "Sweat," the two Pulitzer Prize-winning plays by Lynn Nottage, deal with political problems in a somber way. But Nottage has another side: "By The Way, Meet Vera Stark." 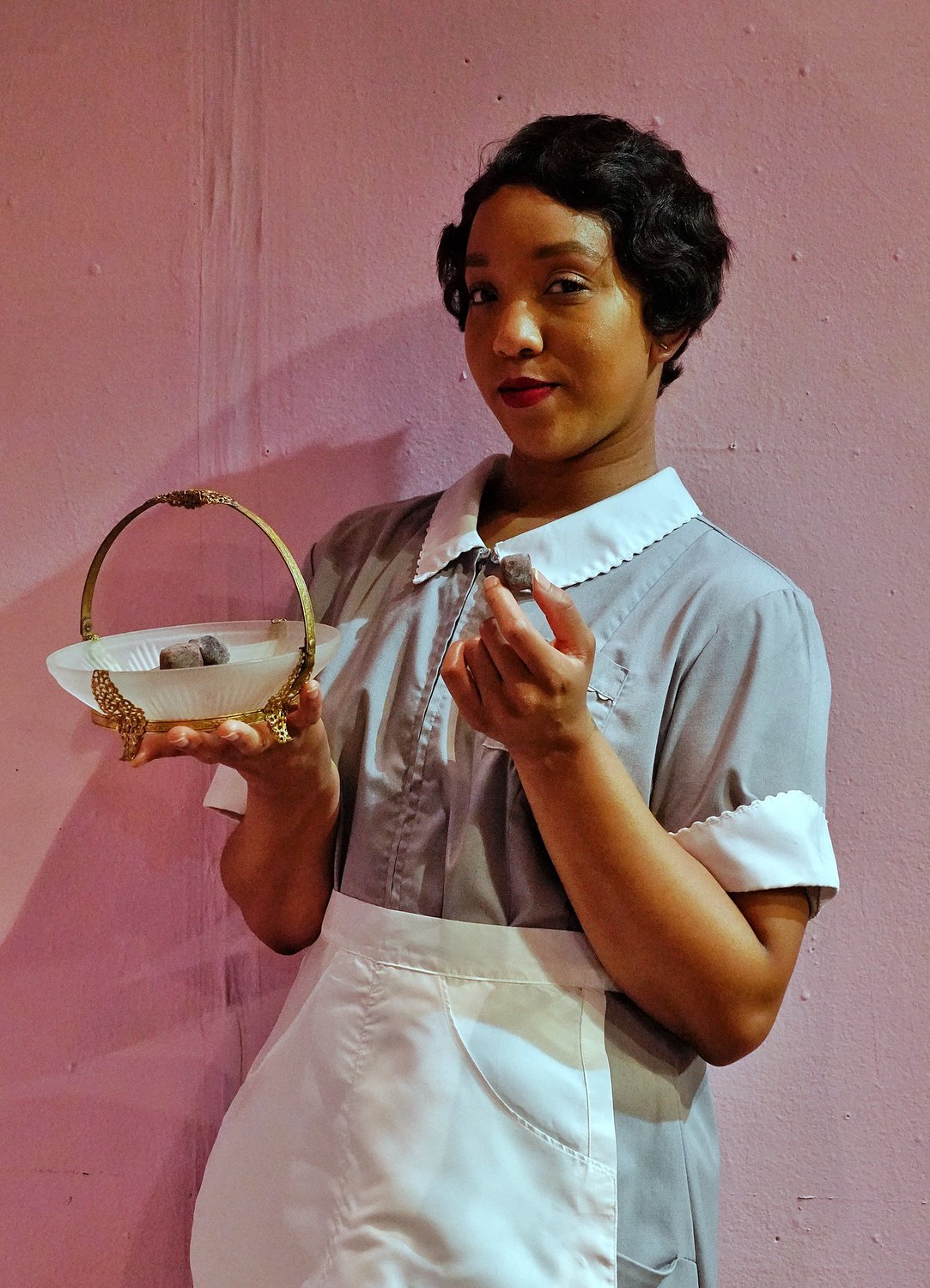 Darrah Lashley portrays the title character in “By the Way, Meet Vera Stark,” a play by Pulitzer Prize-winning playwright Lynn Nottage, running through June 26 at The Stagecrafters Theater. 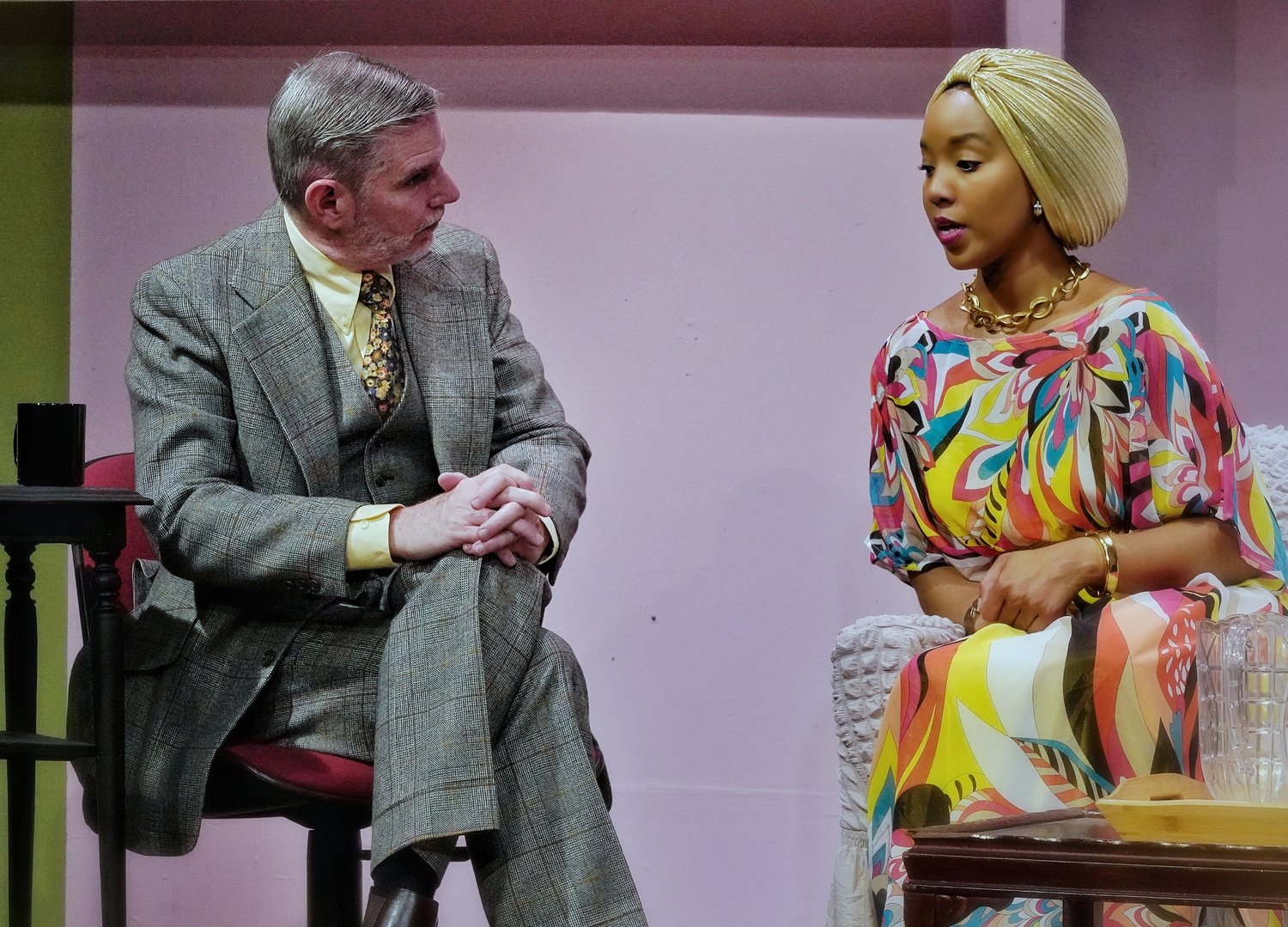 Actors Darrah Lashley (right) and Tom Tansey in a scene from “By the Way, Meet Vera Stark,” running through June 26 at The Stagecrafters Theater.
Previous Next
Posted Thursday, June 23, 2022 12:00 am
by Hugh Hunter

"Ruined" and "Sweat," the two Pulitzer Prize-winning plays by Lynn Nottage, deal with political problems in a somber way. But Nottage has another side. "By The Way, Meet Vera Stark," now running at Stagecrafters, has such wild, satirical verve it almost feels like the work of a different playwright.

Vera Stark (Darrah Lashley) is a struggling Black actress in Depression-era Hollywood. "The Colored maid" is the only role available to her.  At the same time, Vera is the real-life maid who works for Hollywood star Gloria Mitchell (Elena Nahrmann), known as America’s Little Sweetie Pie.” Vera urges Gloria to get her the maid role in the star’s upcoming movie, "The Belle of New Orleans."

Vera shares an apartment with Lottie (Tanya O'Neill) and Anna (Candace Miller). Lottie remembers the time when she got to play Juliet, but is now resigned to her Hollywood fate with comical cynicism.  Lighter-skinned Anna passes herself off as a glamorous Brazilian who uses the pretense to cozy up to producers.

This is a familiar stuff, and it yields a familiar kind of humor. Director Suki Saurus makes it fresh with the help of a fine cast. She draws cameo performances from Nahrmann as drama queen Gloria, and from all three actresses in their spoofs of Black, stage stereotypes.

In the early resolution, movie mogul Frederick (Tom Tansey) wants to give America happy stories. But with ludicrous sincerity, director Maximillian Von Oster (Brian Scott Campbell) insists on doing a movie about "real Negro suffering." The actresses, now working as maids at the studio party, win him over with calculating performances of grieving caricatures, and break into the movies.

But in Act Two, Nottage breaks new ground. Three African Americans in a 2003 symposium ask, "Who is Vera Stark?"  We watch a movie scene from a "great southern classic" of the 30s, where a Black maid (Vera) pleads with a dying belle (Gloria), "Please don't die!" We watch clips of 1973 interviews with the two retired actresses from “The  Brad Donovan Show.”

Saurus' actors respond with daring to this change. They love turning into different people. Tanya O'Neill (actress Lottie) is now Carmen, a talking head, professor of semiotics with an ineffable grasp of racism. Candace Miller (actress Anna) is now Afua, a lesbian poet with a visceral sense of the truth. She finds Carmen's intellectual stance infuriating.

Some characters are old wine in new bottles. Tyler Andrews excelled as Leroy in Act One, a super laid-back trumpet player whose mask falls off  when he commits criminal assault. He is now the same guy in new form, the fully-composed symposium leader who suddenly erupts in anger.

As to Vera and Gloria, they are lost in this new world. Gloria, no longer in the limelight, is now nondescript. Vera cannot wrap her head around the new term "Afro-American" and after 1973, she disappears altogether. There have been reported sightings but she may be dead (a hotly-debated symposium question).

The Stagecrafters production is brazen, clever and unsettling. It shows old stereotypes morphing into an unexamined mosaic. The faux intimacy of “The Brad Donovan” show sums it up. Tom Tansey (movie mogul Fred) is now Brad, a talk show host. He is full of strained laughter as he coaxes the audience to applaud. But when Vera and Gloria burst into a violent argument he is nonplussed because he cannot find an answer to this situation on his cue cards.