Sandra Bullock and George Clooney star in the visually stunning “Gravity.”[/caption] by Bill Wine Each week, veteran film critic Bill Wine will look back at an important film that is worth … 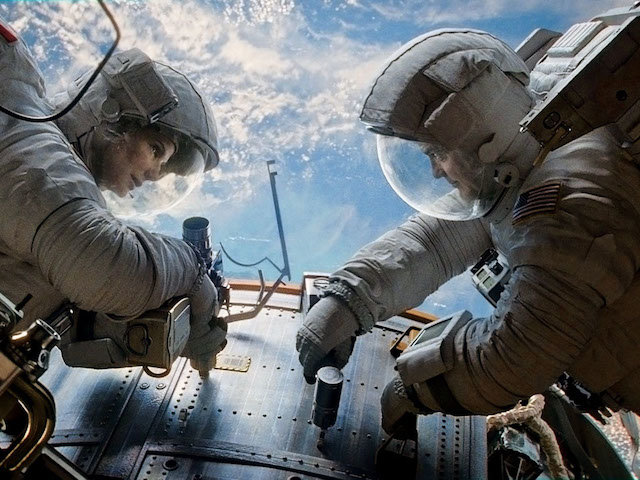 “Life in space is impossible.”

So says one of the opening title cards in “Gravity,” a visceral, breathtaking, ironically titled 2013 science-fiction thriller that then proceeds to show us that very thing: life in space. And it reminds us that you don’t need aliens to make outer space scary.

“Gravity” is a brilliantly realized, completely riveting, dread-drenched science fiction thriller about two astronauts stranded in orbit around Earth. And it turns out to be one amazing vicarious experience, simultaneously dream and nightmare, with a set of cinematic illusions that simply – well, maybe not so simply – astounds.

Sandra Bullock plays a newly minted astronaut on her first mission and George Clooney a seasoned veteran on his final mission. She’s wary of medical engineer Ryan Stone, he’s been-there-done-that smart aleck Matt Kowalsky. She has tragically lost her young daughter, he has been abandoned by his wife for another man.

While working to repair the Hubble Space Telescope at the space station, they’re informed by Mission Control (via the voice of Ed Harris) that debris from a satellite shot down by the Russians is headed their way.

They don’t take it too seriously at first, letting flying parts just whiz by. But when the rest of their crew is tragically killed, they’re stranded in space as the only survivors.

Their only hope, as they spin and turn and grope and flail, is to somehow make their way to the international space station that is not exactly around the corner. Hey, there are no corners. Or gravity. Or levity.

This is Bullock’s movie, to be sure – Clooney is effortlessly charming, as usual, but is really only in about a third of the film – and she is more than up to the insular task.

Mexican director Alfonso Cuaron (“Roma,”“Children of Men,” “Harry Potter and the Prisoner of Azkaban,” “Great Expectations,” “Y Tu Mama Tambien”) co-wrote the pretty-close-to-real-time script with his son, Jonas. It’s an exploration of rebirth and rejuvenation and despair and, ultimately, the miraculousness of life.

But it’s the masterful technical craft on display that has the most impact. Cuaron, famous for long, unbroken takes in the name of realism, opens the film with a 13-minute segment captured in a single shot that is an absolute marvel of visual choreography.

His film has edge-of-your-seat intensity and, at times, a strong sense of claustrophobia. But it is also exhilarating in its welcome invitation to us to vicariously experience space-walking – and the understandable fears that go with it.

And the technological innovation that made the film’s astonishing illusions possible is, for once, not only show-offy impressive but justified by an overwhelmingly immersive film that may be providing a glimpse into cinema’s technical future.

This magical movie couldn’t be more stuffed with moments that will make you think, “How did they do that?”

This is a tensely absorbing and awe-inspiring survival epic about being marooned in space that is nothing less than a glorious and majestic filmmaking feat.

Yep, get ready for the awe of “Gravity.”