Nina Ahmad, who was elected president of the Pennsylvania chapter of the National Organization for Women in January, will never take voting or freedom for granted. 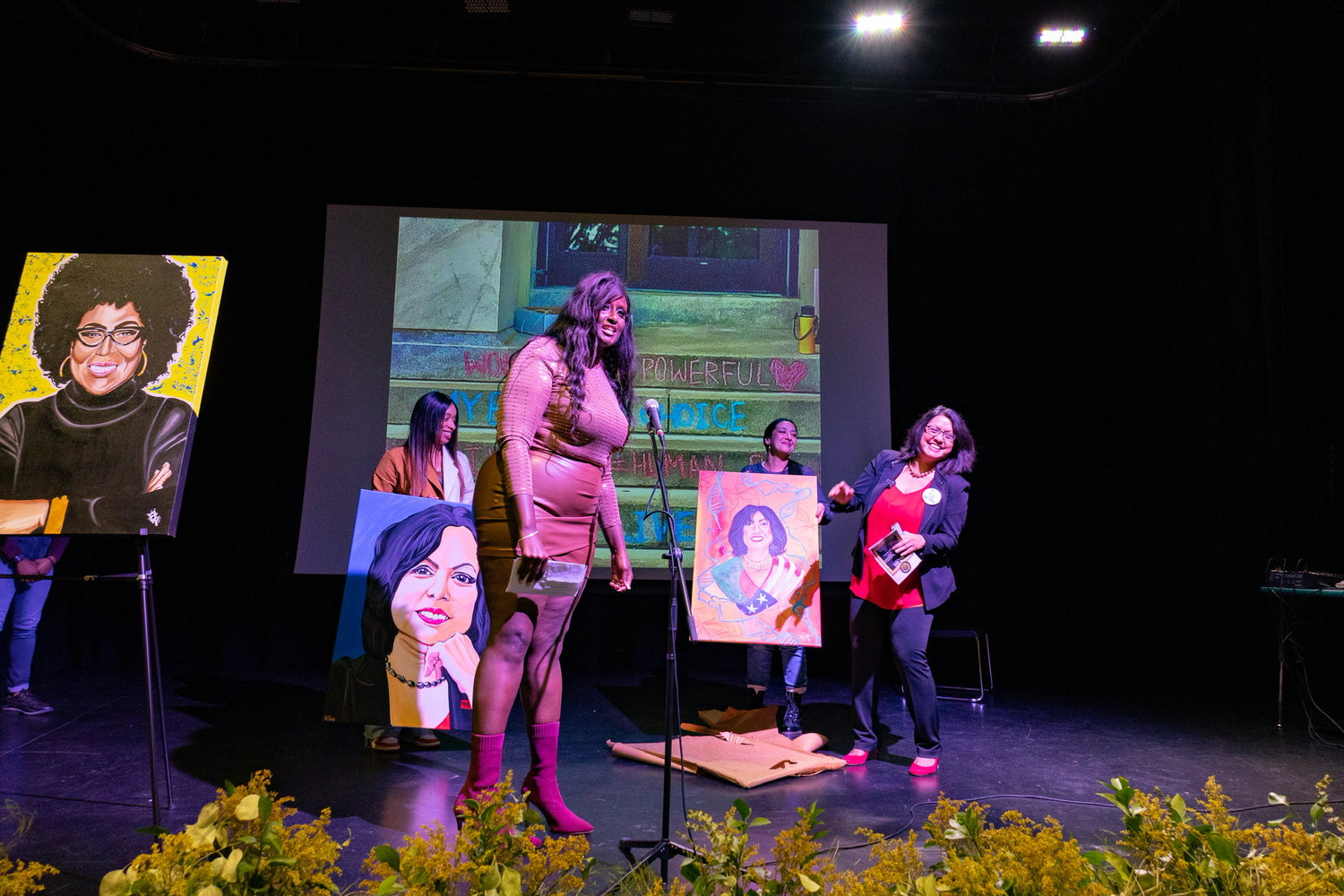 Nina Ahmad (far right), president of the Pennsylvania chapter of the National Organization for Women, at a get-out-the-vote event Sunday at Taller Puertorriqueno, a cultural organization and arts center based in Kensington. On the left is her collaborator, Zarinah Lomax. Standing at the back are Tanisha Serrano of N. Serrano Arts (left) and Billy Joe Michel of Trail Her Trash LLC (right).
Photo by K. Naroen Chhin
Posted Thursday, October 20, 2022 12:00 am
by Len Lear

Nina Ahmad, who was elected president of the Pennsylvania chapter of the National Organization for Women in January, will never take voting or freedom for granted – and she is doing everything she can to ensure that the rest of us don’t, either.

Ahmad, who left her home country of Bangladesh at the age of 21 to study at the University of Pennsylvania, witnessed firsthand what it’s like to live through a bloody war as her country struggled to wrest its independence from Pakistan.

“Having grown up during a very violent war, I am keenly aware of the role of politics, and how it is integral to our lives,” Ahmad told us last week from the comfort of the Mt. Airy home, where she has lived for 37 years. “I always remember that I am alive because of the ultimate sacrifice of more than three million freedom fighters and the lifelong trauma of more than 250,000 women and girls who were brutalized as a tool of war.”

For now, her efforts are focused on producing a major "get out the vote" initiative that uses art to reach out to marginalized potential voters and engage with them on issues that matter.

The NOW initiative includes two election day mobilization events, the first of which took place Oct. 16 at Taller Puertorriqueno in Kensington The other, scheduled for Sunday, Oct. 23 from 2 to 4 p.m., at Crane Community Center at 10th and Vine streets, will feature two local muralists who will frame the theme “My Body, My Choice” on canvas, and speak briefly on how their art is connected to making informed choices as a voter.

“This is unique and emblematic of who and what Nina is all about,” said Shoshana Bricklin, a local attorney and political activist. It’s all part of her goal to really focus on issues of reproductive justice, gender equality, gay rights, combatting racism, ending rape culture and sexual assault and violence against women, Bricklin said.

Growing up in Bangladesh, Ahmad's mother was a social worker who later became a teacher, and her father was a public servant who worked in the finance sector. Both believed in giving back, she said, and were engaged in civic and charitable efforts. Ahmad remains determined to honor their sacrifices, and those of her countrymen and women who fought and died to gain their independence, by doing the same.

Ahmad first got significantly involved in politics when Howard Dean, a former governor of Vermont and a progressive, ran for the Democratic nomination for president in 2004. Ahmad has been active in politics ever since, even winning the Democratic Party's nomination in a heavily contested six-candidate primary for Pennsylvania auditor general in 2020.

However, despite winning more than 3.2 million votes in the general election that November, she lost to the Republican candidate, Timothy DeFoor.

But much of her work goes well beyond politics.

Ahmad earned her undergraduate degree at Lawrence  Institute of Technology (now Lawrence University) in Michigan. She earned a doctorate in chemistry at the University of Pennsylvania and then completed a postdoctoral fellowship in molecular genetics and biology at Thomas Jefferson University. She has worked as a molecular biologist, and also is the co-owner of a community development business, JNA Capital Inc., which she started in 1994 with her husband, Ahsan M. Nasratullah. He serves as president of the company, and has been working in real estate finance and urban planning for almost 30 years.

Ahmad also served as deputy mayor of public engagement under Mayor Kenney, managing people, initiatives and budgets of more than $4 billion in public funds. She helped launch the city's Commission for Women, fighting for pay equity and working to help end workplace harassment. She worked to support reform and opportunity through the city's Youth Commission, the Office of Black Male Engagement and the Office of LGBTQ Affairs.

“I believe I have much to offer my beloved City of Philadelphia,” she said. “I can help address why it is that parts of Philly are not thriving, and make sure we #LeaveNoOneBehind, which continues to be the hashtag I use to describe my overarching philosophy.”

Another thing Ahmad is passionate about is her home neighborhood of Mt. Airy, where she and her husband raised two daughters, Joya and Priya.

“I love living in East Mt. Airy – it is diverse in a multitude of ways, including racially and economically,” she said. “We have the best neighbors who truly care about each other.

“Being an immigrant family with not many relatives in the vicinity, our neighbors are our extended family who nurtured our daughters as they grew up,” she added.

For more information, visit pennsylvanianow.org. Len Lear can be reached at lenlear@chestnuthilllocal.com