Everything you ever wanted to know about making and enjoying beer can be learned at the Attic Brewing Company. 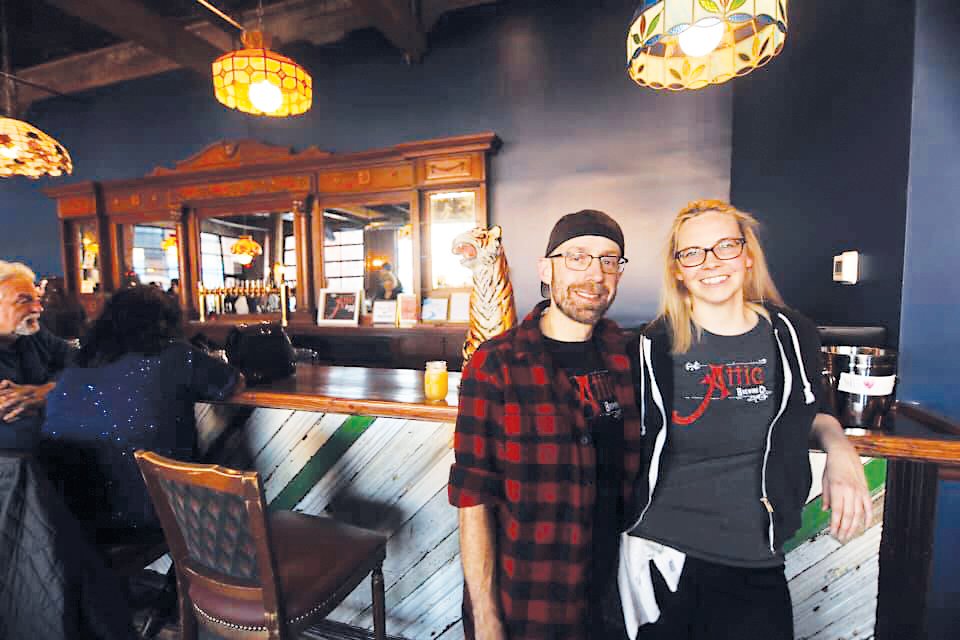 Todd and Laura Lacy of Attic Brewing will give a talk on the history of beer at MALT.
Posted Wednesday, October 6, 2021 8:00 am
by Len Lear

Everything you ever wanted to know about making and enjoying beer can be learned at the Attic Brewing Company, a 6,000-square foot brewery and taproom with a 44-foot long bar at 137 W. Berkley St. in Germantown's Wayne Junction area.

The brewery is holding two Mt. Airy Learning Tree classes there on Oct. 19 and Nov. 16, where either one of Attic's owners, Todd and Laura Lacy, will discuss the history of beer, both generally and those specific to Philadelphia.

Attic Brewing Co., which opened on the anniversary of Prohibition in January of 2020, has quite an unusual history in that more than 300 investors crowd-funded the brewery into existence via Instagram.

It all started in 2010, when Laura Lacy, 39, who used to work for a major fashion retailer, bought her then-boyfriend Todd Lacy, now 41, a beer-making kit for his 30th birthday. At the time, he was a park ranger at Independence National Historical Park. The couple shared a love of beer, and when they got married four years later, they held their wedding reception at Yards Brewing Co. on Spring Garden Street.

The couple opened the business just before the pandemic, when many restaurants and retailers started to suffer. But despite that, Laura said business is good, and that they are producing about 80 barrels of beer per month. “We have been able to keep growing our brand,” she said, “and we have an 8,000 square-foot beer garden that has been great. We turned an empty lot into a neighborhood spot!”

The 250-seat beer garden has full bar murals by local artists and outdoor games. It features free live music every Wednesday and Friday at 7 p.m., and the Germantown Outdoor Market, which includes local vendors, live music and food trucks, every Sunday from 2 p.m. to 6 p.m.

The pandemic did not keep them from opening, but it does present problems - like staying stocked up on supplies like cans, cups, and paper products, and of course there’s the shortage of workers that’s been affecting many area restaurants. “We're trying to continue to grow but have a hard time finding talent that wants to grow with us,” she said.

Todd and Laura are hoping that as time goes by, more customers will stop by for a drink on their commutes on one of the six Regional Rail lines that run through the Wayne Junction SEPTA station, which was renovated in 2015 at a cost of $31.5 million.

Attic does not sell kegs to the public right now. Their beer is available in to-go cans, crowlers and growlers. According to Laura Lacy, their best-selling beers are currently Hazy IPAs, but their Belgian beers and lagers are popular also. The beers are created by brewer Bogdan Lisachenko and assistant brewer Chris Selvoski. Many customers enjoy their beer with food from Deke's Barbecue, which is next door.

For more information, visit atticbrewing.com. Samuel Newhouse contributed to this article. Len Lear can be reached at lenlear@chestnuthilllocal.com

Wins lottery: from Albania to Mt. Airy for BYOB chef