The City of Philadelphia’s Department of Licenses and Inspections is investigating Infinite Enterprises, LLC, a construction company that demolished a Chestnut Hill home last year. 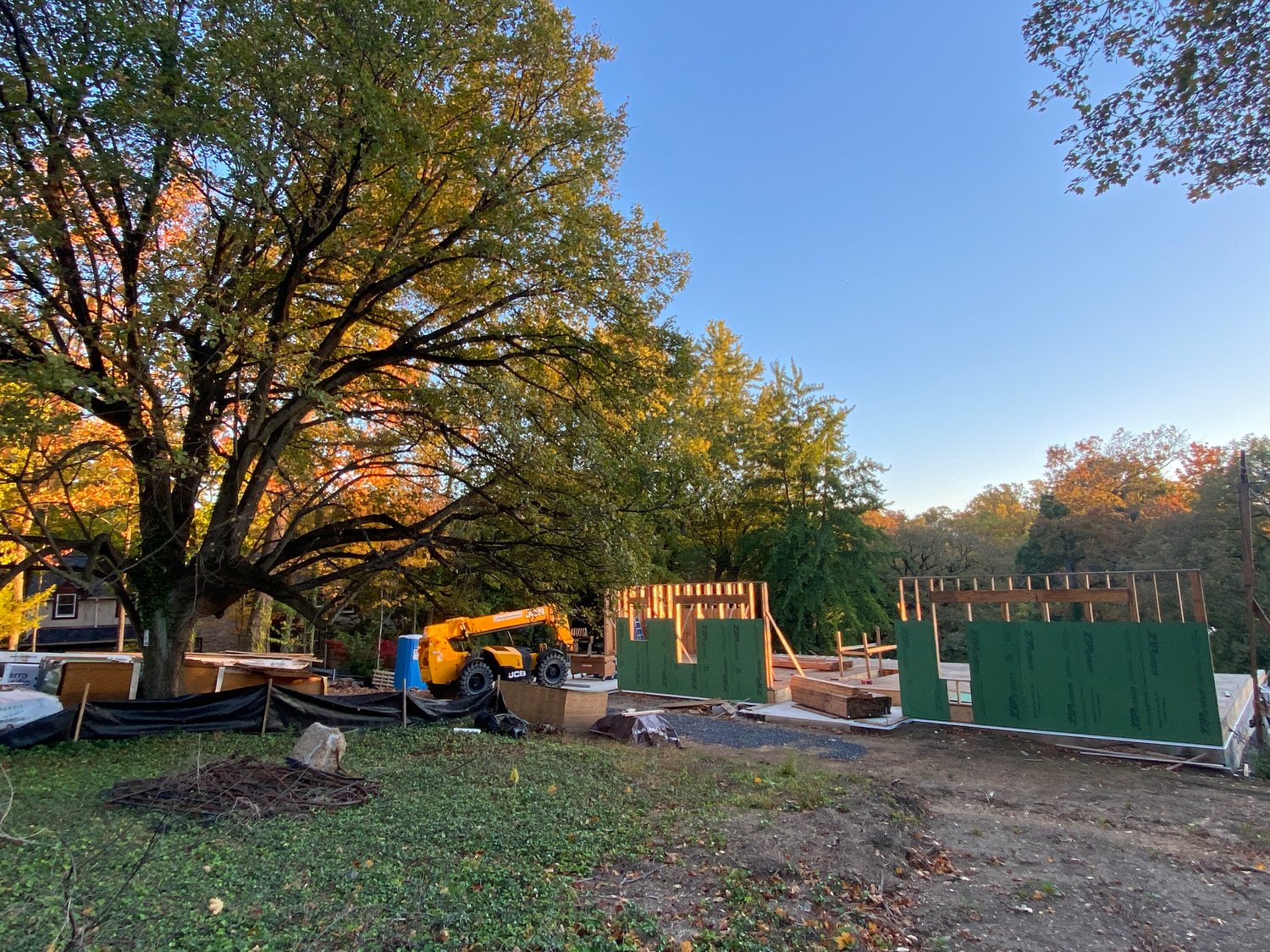 A halfway built house is all that sits on 9402 Meadowbrook Ave. Construction began without a valid permit.
Photo by Tom Beck
Posted Thursday, October 27, 2022 12:00 am
by Tom Beck

The City of Philadelphia’s Department of Licenses and Inspections is investigating Infinite Enterprises, LLC, a construction company that demolished a Chestnut Hill home last year without proper permits.

The company, which also owns the property at 9402 Meadowbrook Ave., began construction on a new house this year on the same property without the required permits, and twice violated a May 31 stop work order, once on Sept. 7 and then on Oct. 13, city spokesperson Kevin Lessard said. The stop work order sign placed on the property by L&I had been removed, he said.

“There is currently an open investigation being conducted on the contractor by the Audits and Investigations Units (AIU) of L&I,” Lessard said in an email. “When the investigation is concluded, it will likely result in license violations and a possible license suspension.”

Earlier this month, the Mt. Pleasant Garage in Mt. Airy was also demolished without proper permits.

“They stopped working for a while,” she said. “Then a few weeks later they said they were allowed to start working again.”

Meanwhile, the neighbor is stuck living next to a halfway-built home.

Infinite’s disregard for the stop work order and the city’s permitting process alarmed some other neighborhood stakeholders.

“It certainly seems to me that it’s an indication of a city that cannot police itself,” said Celeste Hardester, development review facilitator for the Chestnut Hill Community Association. “If there's not proper monitoring of development projects then that means anything can be built. Corners can be cut and buildings can be not built to code so buyers beware.”

Hardester cited the unpermitted electrical work that took place at Chestnut Hill’s Hiram Lodge, which was engulfed in flames in August, as an example of what can go wrong when the city’s building code isn’t followed. The Philadelphia Fire Department confirmed that the fire was caused by electrical wiring.

“It’s fundamental that there needs to be government regulation oversight as to what is going on with construction,” she said. “It just has everything to do with whether civilization is working well or not.”

Dane Roland, owner of Infinite Enterprises, said in a phone call that his company’s handling of the process was “unacceptable.”

“I’m taking responsibility for the whole project,” he said. “I want it built right.”

Roland said he has worked primarily in the suburbs and is familiar with the city’s permitting process.

“It was a lack of my experience in Philadelphia and procedures with L&I,” he said. “I had to get acclimated.”

Will Fernandez, the director of L&I’s Audits and Investigations Unit, said the investigation into Infinite is “relatively mature.”

“We identified a subject and conducted an interview and anticipate the investigation concluding in the next few weeks,” he added.

Fernandez said it can be more difficult to hold contractors responsible when they don’t have permits because “they agree to abide by certain conditions that allow us to issue violations without having to go through court” when they accept a city license.

When they’re not licensed, he said, “we don’t have that same hook in them, so it's much more difficult to get them to cooperate.”

Hardester isn’t the only civic activist who is concerned. Venise Whitaker, an advocate for safe building practices who lives in Fishtown, said the city needs stiffer penalties to combat developers who skirt the law. Fishtown has seen a wave of shady development practices in recent years, some of which have resulted in houses collapsing.

Lessard told the Local that contractors are fined $1,000 for each stop work order they violate. If stop work orders are repeated over time, he said, their license could potentially be suspended or revoked.

But Whitaker said developers will sometimes create a backup LLC so they can switch places if the primary LLC loses its permit.

“You can easily just open another LLC,which we’ve seen happen, then you just keep on operating,” she said. “We need building codes that can be enforced and prosecuted.”

Lessard said the city is aware of such a practice, and is “working to combat it.”

“We know that from the suspended contractor’s perspective, it’s their livelihood and how they put food on the table,” he said. “So we know there’s a strong possibility that a contractor will attempt to evade a suspension.”

Last summer, the city made it illegal to hire someone who owned a company that was suspended. Fernandez said.

“If you are the owner of a company, and that company is suspended, you are not allowed to sidestep the suspension by creating a new company with a new license,” said Fernandez.

L&I has already issued at least one suspension to a contractor for being part of a team to help another evade a suspension, Fernandez said. In a separate case, it also turned a temporary suspension into a permanent revocation when it found out that a contractor was trying to side step a suspension.

“It’s very much still an active process where we still need to keep a close eye on,” Fernandez said.