Will the 2022 midterms ride the enthusiasm wave of the 2018 midterms?

Coming off the heels of the 2016 election of President Trump, the nation was a more polarized place than at any point in recent memory.

Will the 2022 midterms ride the enthusiasm wave of the 2018 midterms? 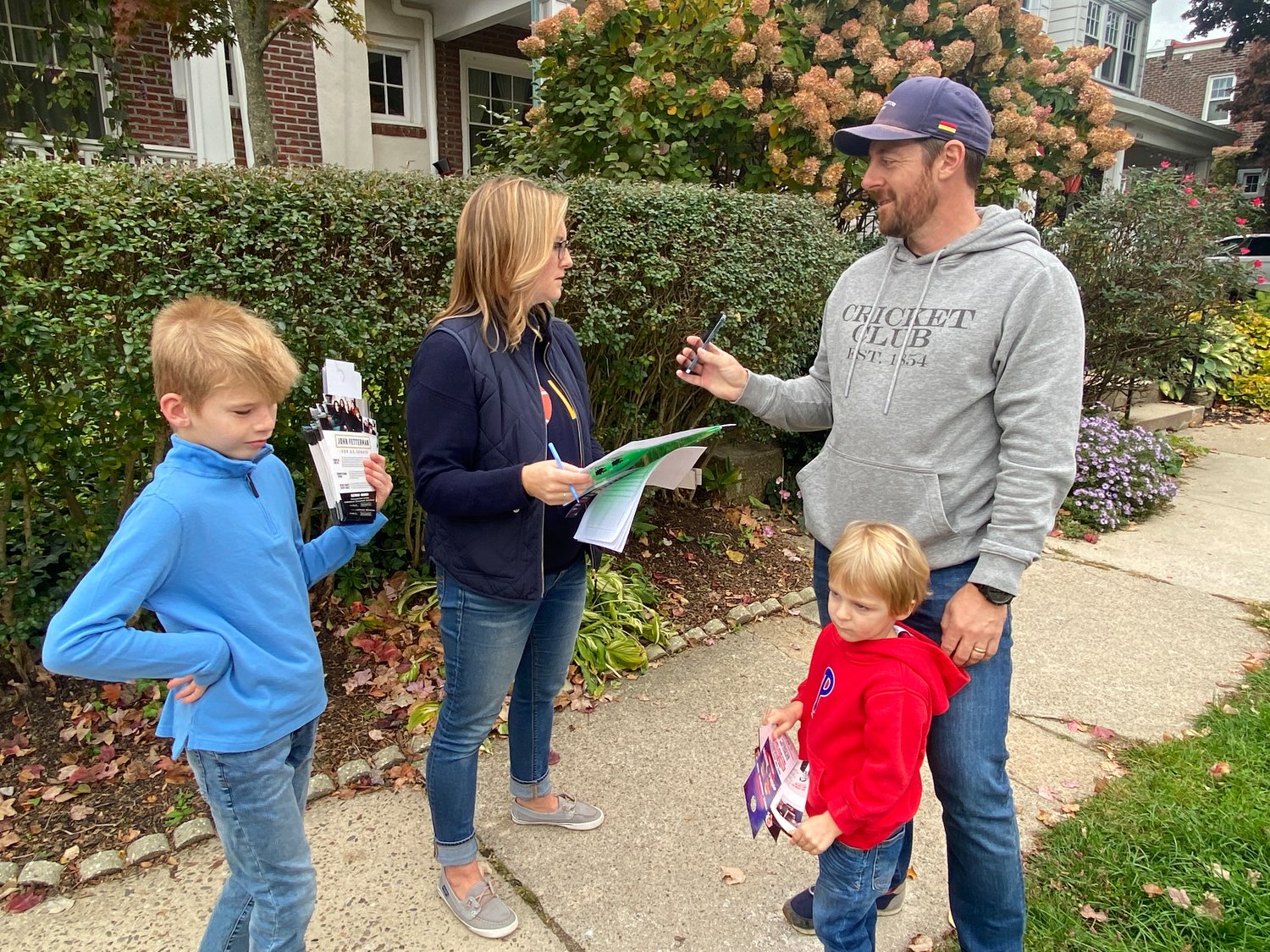 Eryn Santamoor, a Democratic committeeperson in the 9th ward, talks with her Chestnut Hill neighbors as she canvassed the neighborhood on Sunday.
Photo by Tom Beck 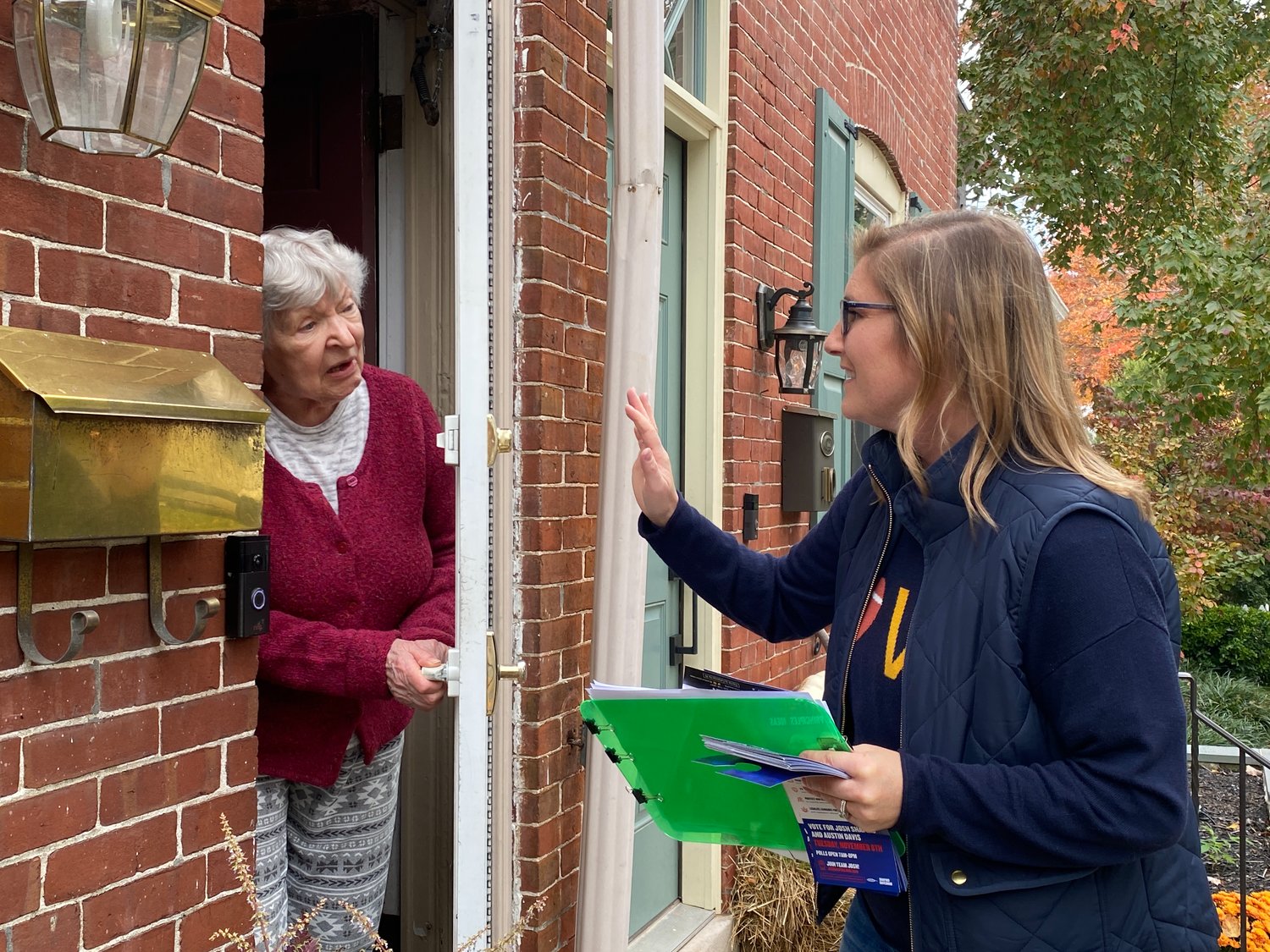 Eryn Santamoor, a Democratic committeeperson in the 9th ward, knocks on her neighbors’ doors in Chestnut Hill on Sunday.
Photo by Tom Beck
Previous Next
Posted Thursday, October 27, 2022 12:00 am
by Tom Beck

Coming off the heels of the 2016 election of President Trump, the nation was a more polarized place than at any point in recent memory. As a result, two years later, voters delivered the highest turnout in four decades during the midterm elections. The same was true for the 9th and 22nd Wards in Northwest Philadelphia.

Northwest Philadelphia appears to be continuing that trend for this November’s voting day. In fact, some consultants are saying the 2022 election season could wind up being one of the most expensive, in terms of campaign spending, in history for a midterm election.

“Democrats did well in 2018 because they were alarmed with what was happening with the Trump presidency,” said David Thornburgh, president and CEO of the Committee of Seventy. “It doesn’t feel like there’s quite that same clarion call, so if I had to guess I’d say that turnout is going to be slightly less, but maybe in the same ballpark.”

Thornburgh sees turnout as a function of three things: issues, how likely infrequent voters are to show up at the polls and how campaigns dedicate their resources.

On the Democratic side, sources told the Local that abortion, and free and fair elections are the top concerns. The issues were highlighted by Jeff Duncan, Democratic leader of Chestnut Hill’s 9th Ward.

Republicans, meanwhile, say that inflation, crime and school choice are the most important issues in this cycle – and are at the root of the support garnered by  state gubernatorial candidate Doug Mastriano.

“I talk to folks that think these new politicians can have an effect on reducing prices and inflation and crime,” said Calvin Tucker, Republican leader of Mt. Airy’s 22nd ward. “That’s what I hear.”

Whatever is driving enthusiasm, Duncan said, he believes Democrats are especially excited about voting in this midterm. When he attended the Chestnut Hill Community Association’s Fall For the Arts festival last month, he said, he ran out of lawn signs for Democratic gubernatorial candidate Josh Shapiro and senatorial candidate John Fetterman.

“I think that’s an expression of people wanting to show support for the candidates we have,” Duncan said. “As you drive through Chestnut Hill and Mt. Airy, you see people have Shapiro and Fetterman signs up everywhere.”

While the same is not true for either Shapiro or Fetterman’s Republican opponents, Doug Mastriano and Mehmet Oz, Republicans in the Northwest are working hard to turn out their votes.

Larry Ceisler, a Democratic media consultant and longtime resident of Northwest Philadelphia, said that he also expects turnout to be high – if slightly less this year.

“You don’t have Trump on the ballot as a lightning rod,” he said, “but in many ways he is still on the ballot whether we’re talking about abortion or democracy.”

That’s particularly true for Mastriano, who has echoed many of the former president’s concerns about election security.

Mastriano, who attended the January 6th rally at the U.S. Capitol that later turned violent, has said he’d decertify voting machines if he suspects they’re rigged, and hinted that he would appoint a secretary of state who would disrupt the state’s elections.

But Tucker said he doesn’t think Mastriano should be associated with Trump.

“Donald Trump is not on the ballot, no matter how much one tries to put him on the ballot,” he said. “[Evaluate] Mastriano based on who he is and his actions. You have to stand on your own.”

Tucker told the Local he has concerns about election integrity, although it’s not near the top of his issues list.

“I’ve been a ward leader long enough to have witnessed intimidation and other normalities at polling places,” Tucker said. “Election integrity is important because we need freedom and you need to know your vote is going to count, but it’s not the number one priority.”

Tucker would not say whether or not he had concerns about the legitimacy of the 2020 election. Instead, he stressed a desire to “look forwards, not backwards.”

The issue of turnout in the 9th and 22nd Wards is especially important to both parties this year because the neighborhoods have shown consistently high rates of voter turnout.

Pierce said the Fetterman campaign’s game plan for winning statewide elections for Democrats in Pennsylvania is to churn out high rates of turnout in Pittsburgh and Philadelphia – the two areas with the highest concentration of Democratic voters. he Shapiro, Mastriano and Oz campaigns did not return calls from the Local requesting comment before the paper’s deadline.)

“There’s a direct correlation between wards like the 9th and the 22nd that can help tremendously in a statewide election,” Pierce said. “We don’t take those wards for granted.”

“High turnouts in Northwest Philadelphia indicate that you’re getting a better than average turnout from the same types of voters around the state,” he said. “For a Democrat to win statewide you have to have high turnouts in Philadelphia, especially in the 9th and 22nd wards, because that drives the rest of the city.”

Democratic State Representative Chris Rabb, who represents Chestnut Hill and Mt. Airy, said old-fashioned door knocking works best when it comes to getting people out to vote - something he hopes the Fetterman and Shapiro campaigns commit to doing.

“If you can have a conversation with a trusted neighbor who talks about what a campaign is offering, you’ll get a much better response than reading a tweet or watching a TV ad that has no real substantive value,” Rabb said. “Both [the Fetterman and Shapiro] campaigns have to answer the question of whether they’re going to invest in those tried and true strategies or dump money into more TV ads and D.C. consultants.”

But Pierce told the Local that while his campaign is seeking a “balanced” approach in campaign spending, it is investing more in TV ads than usual.

“Studies show that’s still the most concentrated way to hit a large number of eyeballs and voters,” he explained. “In this race, there’s been almost $7 million spent on TV against us. That’s a lot.”

In any case, Ceisler expects get-out-the-vote efforts for the upcoming election to be “unprecedented,” with both parties shelling out a lot of money and effort.

“I think it could be more than what they’ve done even in the presidential years, if not more,” he said. “It will rank right up there.”