With the victory, Jefferson avenged an 84-79 loss at CHC in mid-January, and the Rams also clinched the regular-season championship in the South division of the Central Atlantic Collegiate Conference for the third season in a row. 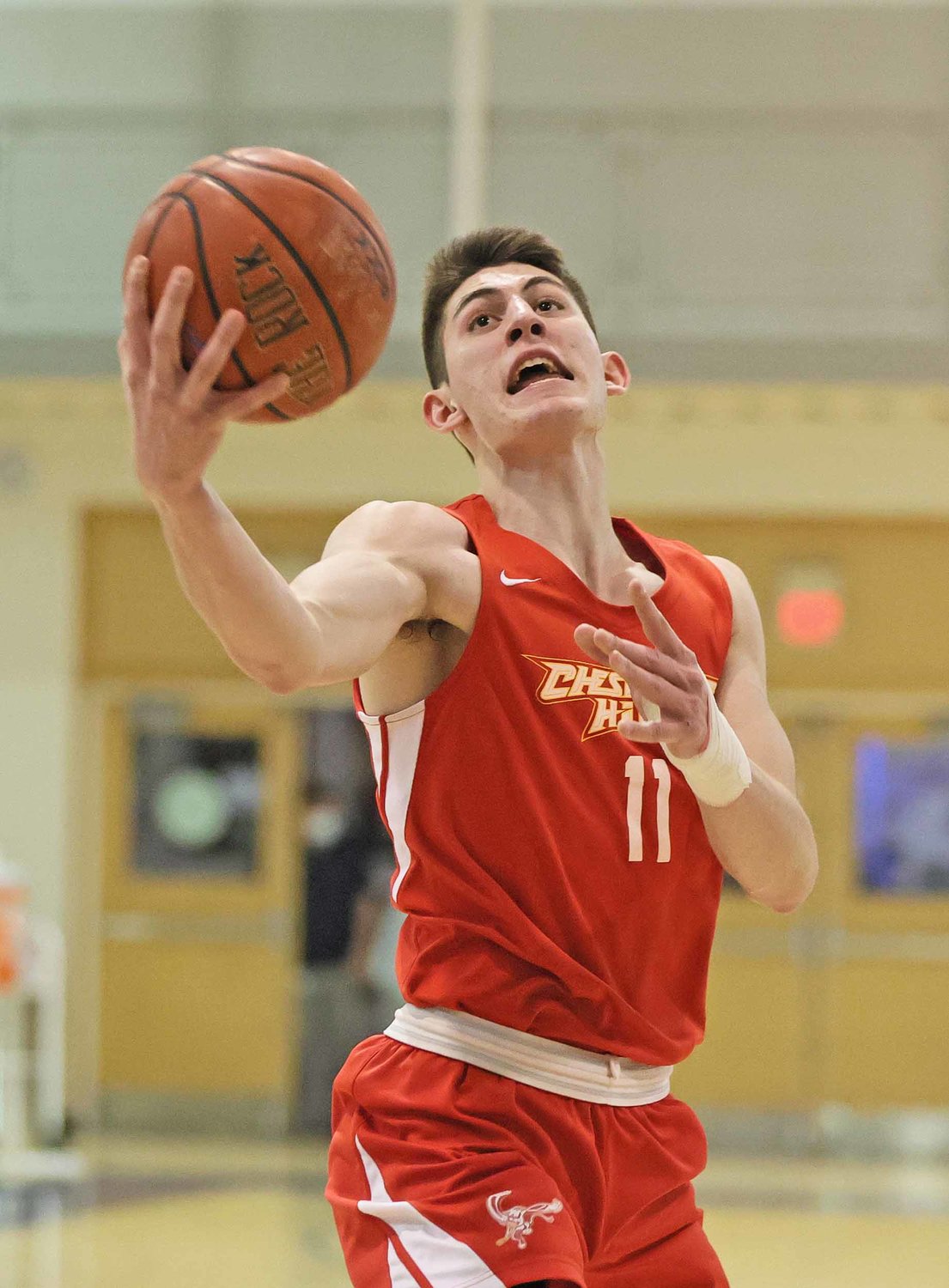 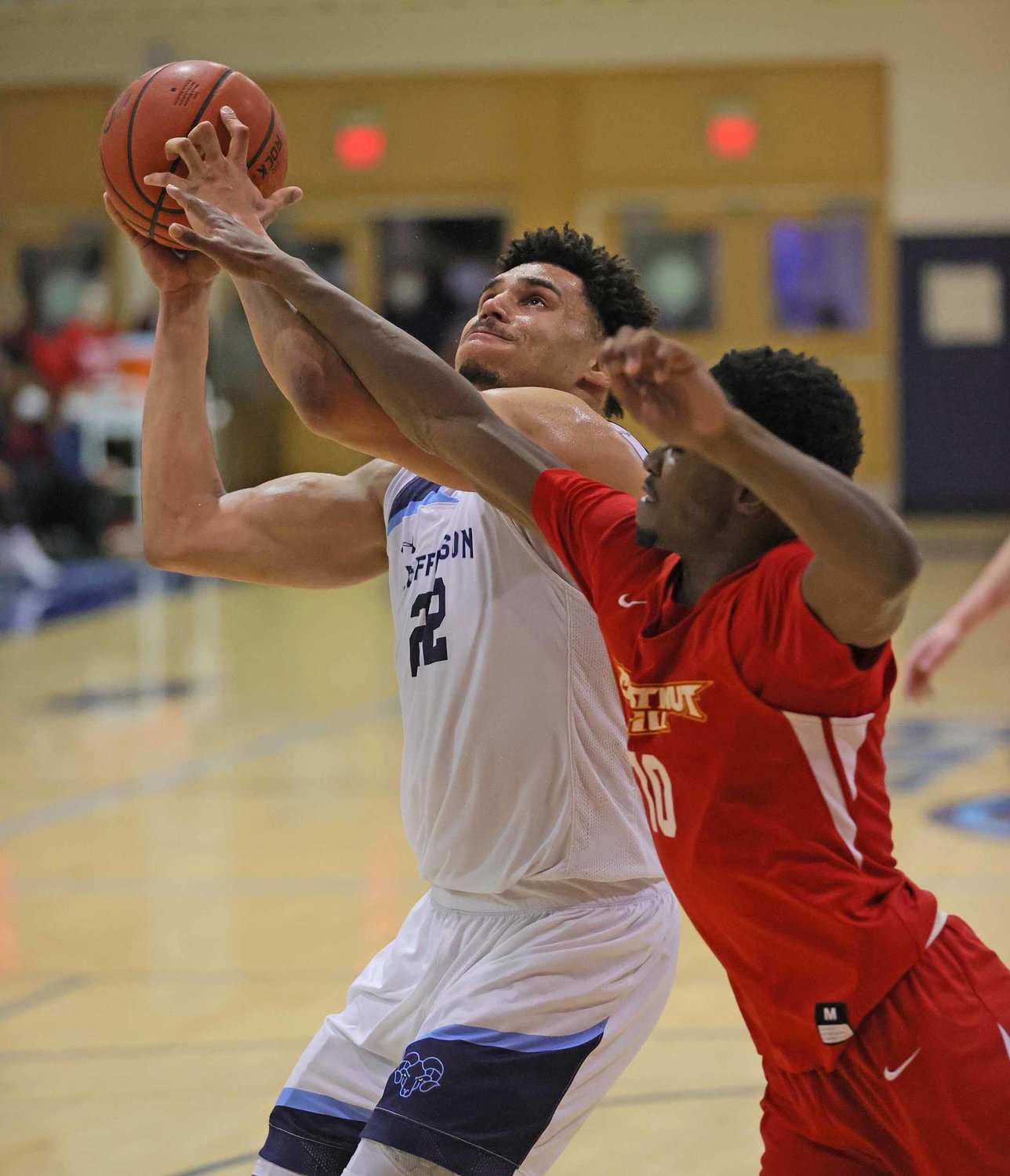 Antonin Kemkeng (with ball), a sophomore from France, lines up a shot for the Rams as CHC's Nigel Haughton (also a sophomore) leaps in to try and block it. Photo by Tom Utescher
Previous Next
Posted Wednesday, February 23, 2022 11:12 am
by Tom Utescher

In the first 10 minutes of last Tuesday's contest at Jefferson University, the men of Chestnut Hill College dug themselves a 4-23 hole, and they were never able to climb completely clear of it. After trailing 41-22 at halftime, the Griffins got their deficit down into single figures (55-46) with about eight-and-a-half minutes to go, but after that the Rams pulled away again to win by 20 points, 82-62.

With the victory, Jefferson avenged an 84-79 loss at CHC in mid-January, and the Rams also clinched the regular-season championship in the South division of the Central Atlantic Collegiate Conference for the third season in a row. Jefferson improved to 12-2 in the conference and 16-5 overall, while the Griffins returned to Chestnut Hill at 9-6, 12-11.

Junior forward Amir Warwick led the Griffins in both points scored (19) and rebounds (eight). A freshman guard, M.J. Iraldi, scored 16 points and pulled six rebounds. For his efforts in two games the previous week, Iraldi had been named Player-of-the-Week by the Philadelphia Small College Basketball Association.

Jefferson got out to a 6-0 lead before CHC graduate student David Erebor put the Griffins on the board with a short bank shot from the right side of the floor. Points were even harder for the visitors to come by in the following minutes, as the Rams built up the aforementioned 23-4 advantage.

Jefferson was up 35-15 with four minutes left in the first half when Iraldi started to come on for the Griffins. With two lay-ups and three free throws, he helped keep the Rams from expanding their lead even more by the end of the half, when the tally was 41-22.

Iraldi had scored a total of 12 points, matching the output of Jefferson's Timko. There was not a lot of support around Iraldi, with no other Griffins garnering more than four points. The Rams got 10 points from junior guard Deondre Bourne, and nine from the imposing Kemkeng.

CHC's Warwick would collect 15 of his team-high 19 points in the second half, producing them largely in the paint. By the 10-minute mark, CHC had gotten a bit closer, at 54-40. Over the next 90 seconds, Jefferson added just one point on a free throw, while Warwick made two successful drives and was fouled each time. Putting away his free throws, he brought the gap between the teams down into single figures, 55-46.

A dunk by Jefferson freshman Bismark Nsiah stirred up the home crowd and, apparently, the rest of the Rams. Timko knocked down a three-pointer from the right wing, and next came a lay-up by Barba-Bey. After this, Chestnut Hill would never get so close as it did before the hosts' 7-0 run.

With four-and-a-half minutes left, Jefferson had increased its margin to 21 points, at 70-49, and it was still 20 at the final horn.