An artist whose work is deeply embedded in Woodmere’s collection is Walter Elmer Schofield (1866–1944), who became known in Chestnut Hill as “Uncle Elmer.” This was because … 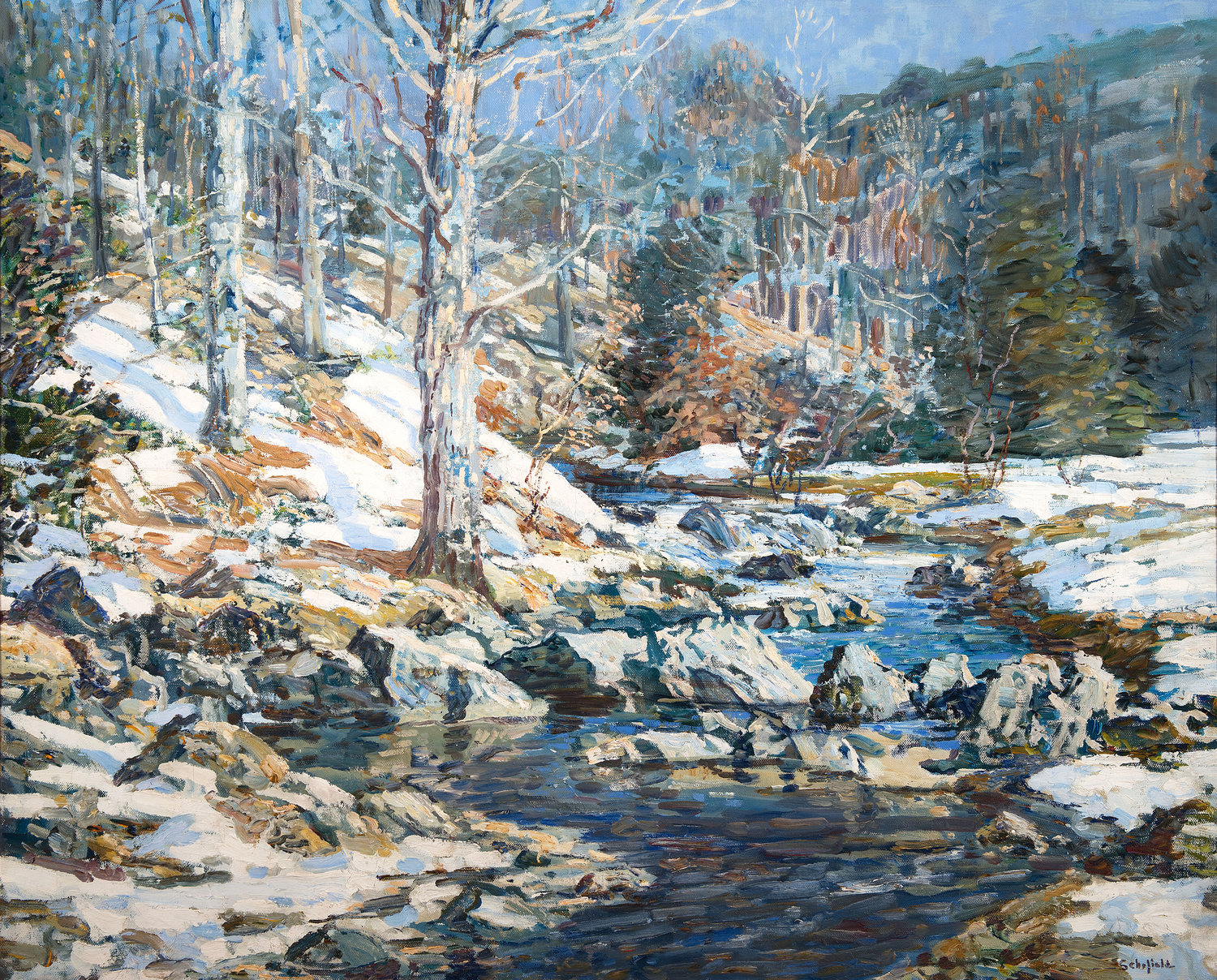 An artist whose work is deeply embedded in Woodmere’s collection is Walter Elmer Schofield (1866–1944), who became known in Chestnut Hill as “Uncle Elmer.” This was because from fall through spring every year, while living in his brother’s family home on West Moreland Street, he achieved the status of favorite uncle to his niece, Sarah Phillips, and her daughter, his grand-niece, Margaret “Peg” Phillips. As Peg described to me not long ago, Schofield—one of the leading American Impressionists­–was extroverted, affable, and fun-loving. He was the kind of uncle who, every so often, would start the day by announcing his intent to treat Peg and her friends to a day of movies and enjoyments in Center City. There was a real sadness each spring when Uncle Elmer sailed back across the Atlantic to his home in England, first to Otley High House in Suffolk and later to the historic Godolphin estate in Cornwall.

It is thanks first to Sarah (whose gifts of paintings came in 1944) and now to Peg (whose gifts came in 2019) that Woodmere boasts more important work by Schofield than any other museum. Our current exhibition, Just In: Schofield—Celebrating the Art of Uncle Elmer, showcases Peg’s recent gift of paintings to the Museum. Please join me on Thursday, November 19, at 7:00 p.m. for our virtual opening celebration and tour of the exhibition. Your invitation to this free Zoom event is  here.

Among the many great paintings in Peg’s gift are several from the early twentieth century, when Schofield was winning top prizes in high-profile, nationally visible exhibitions of American art. He was one of the few American artists of this period to see one of his works acquired by the Louvre Museum in Paris (the painting was later transferred to the Musée d’Orsay). Among the many wonderful paintings on view in our show, Montmartre (1896), Steam Trawlers, Boulogne (1908), and Early Winter Morning (1908–9) stand out as notable acquisitions that take their place among Woodmere’s greatest treasures. So does Wissahickon in Winter (1920), a snowy view that Schofield made right on Forbidden Drive.

Schofield was a refined gentleman, and his taste in frames is a feature of the exhibition that also shines—literally. When sending a painting to an important showing, he would invest in an exuberant gilded frame, placing a special order with acclaimed makers like Newcomb-Macklin of Chicago and Maurice Grieve of New York and London. He also helped create the taste for a style of arts-and-crafts frame now closely associated with Pennsylvania Impressionism, made by his friends and fellow artists Bernard Badura and Frederick Harer. Examples of all the above are on view and described in the wall labels of our exhibition. I’ll be talking about frames as well as paintings in my virtual gallery tour on Thursday, and I hope you will join me on Zoom!

William Valerio is the director and CEO of Woodmere Art Museum.