The late comic Rodney Dangerfield used to say, “I'm getting so old that I could not blow out all of the candles on my latest birthday cake. The heat drove me back.” 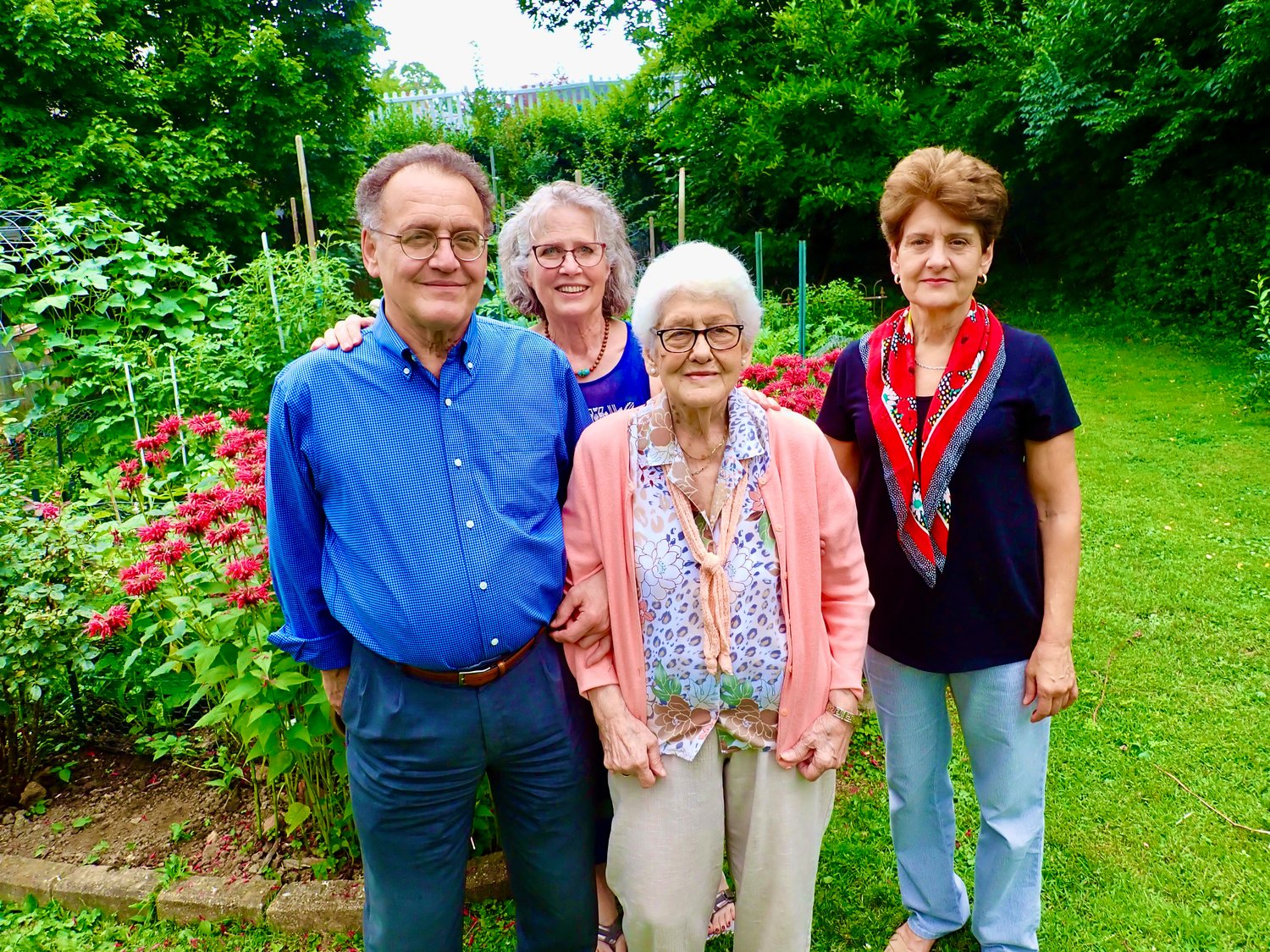 Josephine stands in her garden in Erdenheim with, from left, her son, Stephen; his wife, Lisa, and Josephine's daughter, Jo-Ellen Portolese.
Photo by Len Lear 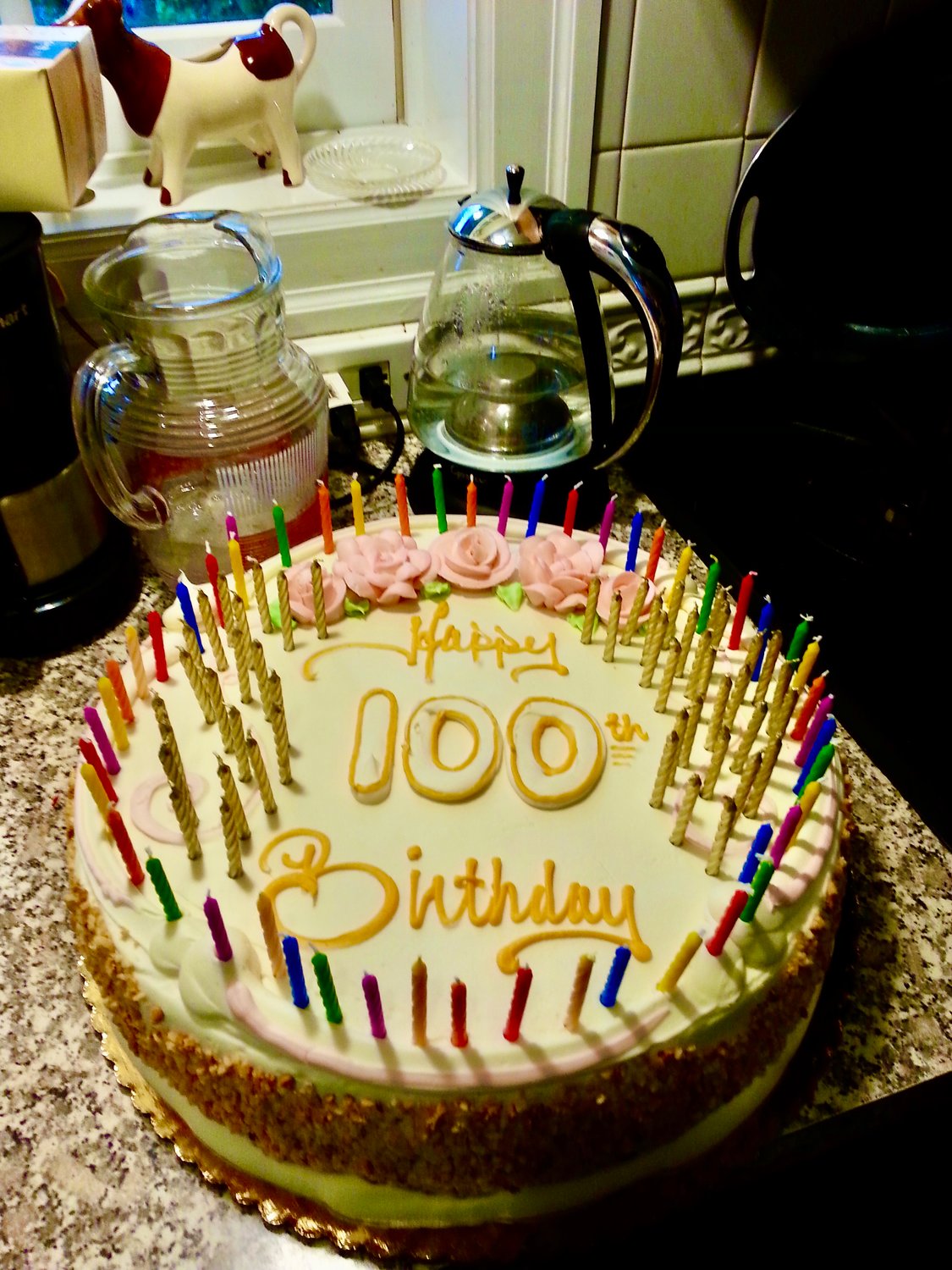 On May 7, the day after Erdenheim resident Josephine Bonitatibus celebrated her 100th birthday, her family presented her with this Italian rum cake sporting 100 candles.
Photo courtesy of Jo-Ellen Portolese
Previous Next
Posted Thursday, July 28, 2022 12:00 am
by Len Lear

The late comic Rodney Dangerfield used to say, “I'm getting so old that I could not blow out all of the candles on my latest birthday cake. The heat drove me back.”

Josephine Bonitatibus, who moved with her husband Albert to Mermaid Lane in 1950 and lived there for 43 years, can definitely laugh at that joke. Bonitatibus, who is now living in Erdenheim with her daughter, Jo-Ellen Portolese, turned 100 years old on May 6. She celebrated the following day by hosting 50 friends and family members - and serving an Italian rum cake sporting 100 candles.

“It was so wonderful having them all here,” Bonitatibus said last week during an interview in her home. “Now I have my good days and my bad days … When you live so long, it seems like a dream. It's almost like certain things way back didn't really happen. It's the strangest thing.”

Josephine Marzullo was born May 6, 1922, the sixth of seven children (all others are now deceased). On that day, her mother was hanging clothes up to dry in their West Philadelphia home. “She carried a tub of clothes downstairs and hung 'em out to dry,” Bonitatibus said, “and then I was born.”

Bonitatibus's parents were part of the wave of immigrants from Southern and Eastern Europe in the early 1900s. They came here in 1910 from Sicily, she said, “because they were hungry.”

Bonitatibus remembers speaking Italian as a child, but has lost it over the years. She clearly recalls the Great Depression, and how poor everyone was in her largely Italian neighborhood in Overbrook. Bonitatibus’ mother made dresses from printed flour sacks.

In the 1930s, Bonitatibus made $8 a week as a part-time secretary. During World War II, she worked for the Signal Corps downtown, which managed communications and information systems for the military. “I was making electrical components,” she said, “and I was paid $42 a week, which was great money at the time.”

She met her husband-to-be, Albert Bonitatibus, through his sister, who was Bonitatibus's co-worker.

They married. But then Albert, a warrant officer in the Army who later became a house painter, died at the age of 44 after falling from a scaffold in 1960.

Bonitatibus remained in their Mermaid Lane house to raise their five children. “I stayed in Chestnut Hill because I loved it,” she said. “That's why I wanted to raise my kids here.”

Portolese said she clearly remembers a lot of joyous and beautiful times as a child, as well as her mother’s regular admonition to “work hard and gain marketable skills.”

“There was a beautiful old mansion that was demolished five months after we moved in to make way for the Market Square shopping center,” Portolese said. “We enjoyed so many Water Tower activities, ballet recitals, band, chorus, Girl Scouts, sports and graduations. There was also a quarry on Mermaid Lane where the Friends Meetinghouse is now. We livened up the block with our young kids. We were like a bunch of monkeys.”

The way Bonitatibus tells it, times were so bad during the 1930s that only one family on their block had a car. Vendors would drive down the street in a horse and buggy hawking fruit, the milkman delivered milk to the front door and salespeople came to the door carrying suitcases bulging with samples.

“You'd say, 'What do you have for me today?'” the Erdenheim centenarian said. “We had lots of mom-and-pop stores. Our next-door neighbors sold wine and cookies out their back door during Prohibition. Our first TV set was in the late '40s, and then in the '50s we started to see cars again.”

“People all over the neighborhood would come to a house that had a color TV,” Portolese added. “My son was so enthralled when he saw one for the first time. He said, 'What is that?'

“Mom and dad would send the kids to the movies on a Saturday afternoon, and they'd stay there all afternoon for 15 or 25 cents,” she continued. “Today we watch a lot of old movies on Turner Classic Movies, and mom still remembers the actors' names.”

Son Albert John died in 2012; daughter Marsha Ann lives in Texas; Stephen Michael lives in Center City; Jo-Ellen lives in Erdenheim and Sharon Grace lives on the island of Vieques, off the coast of Puerto Rico.

“My advice (for living a long life) is to enjoy the good times to the fullest because there will definitely be bad times,” Bonitatibus said. “I never drank much or smoked. I walked everywhere and took lots of buses and trolleys since I never drove a car. I made all meals from scratch with lots of fruits and vegetables from our garden. And keeping a positive attitude is also important.”