85 years of drama at the Sedgwick Theater in Mt. Airy

85 years of drama at the Sedgwick Theater in Mt. Airy 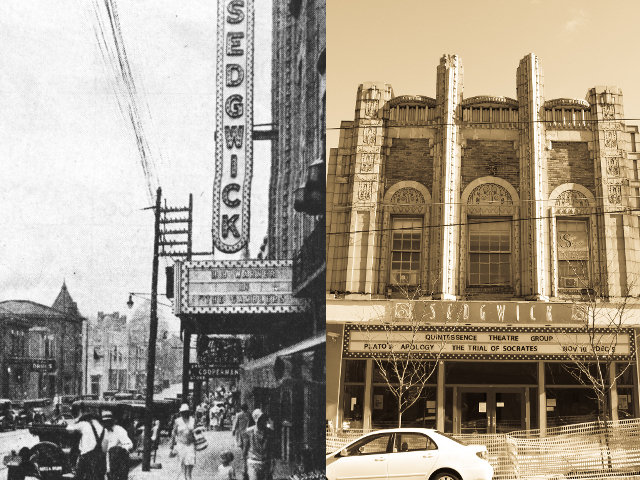 I do not recall the reason for the photo or how I obtained it, but an attached note said it was from the early 1930s. The cars in the photo look like those that were driven by mobsters in the Al Capone era, and I doubt if you’d see anyone today on Germantown Avenue wearing farmers’ overalls and suspenders.

Since I attended movies at the Sedgwick Theater in the 1950s, I do have a sentimental attachment to the spectacular Art Deco movie palace, and I’m sure many other long-time area residents have a similar attachment. Therefore, I decided to look up the history of the theater, and here is what I found on Wikipedia:

(By the way, apparently no one on earth knows the identity of the person for whom Sedgwick Theater — or Sedgwick Street — was named. I tried for about 45 minutes checking with numerous websites that claim to answer any factual question. I visited ask.com, webcrawler.com, info.com, wikianswers.com, about.com, askpedia.com and a few others. Not one could supply the name of the person for whom the Sedgwick Theater and Sedgwick Street were named. I also consulted a book, “Street Names of Philadelphia,” by Robert Alotta {Temple University Press, 1975}, which has 154 pages on the origin of hundreds of Philly street names, but NOT Sedgwick Street.)

The Sedgwick Theater was designed in the 1920s Art Deco style and built during a movie revolution with the advent of sync sound and showed silent films as well as talkies. This perhaps explains the theater's design including a stage for live performance, as well as its large single screen.

The Sedgwick was designed to include a balcony, but shortly before construction the balcony was removed from the plans. (A balcony would likely have increased seating to 2000.) This accounts for its amazing vaulted ceilings. When entering the theater, you would get your ticket at the ticket booth, into a rectangular lobby space.

This led to a larger oval lobby where you could check your coats. The men's room and women's room were on opposing ends of the lobby. The oval lobby was a pivot point of the design, and the actual theater's footprint traveled back and to the left of the lot from that point. Entering the theater through five large archways, the rake of the seats dropped about 15 feet to the screen.

The Sedgwick Theater opened in 1928 and remained in operation until 1966. When it closed in 1966, it was purchased for use as a warehouse. The theater building was split in two. A cinderblock wall was constructed closing off the theater space from the lobbies.

The theater was stripped of its seats and the rake, leaving a gutted box in the back. The ceiling of the theater was left somewhat intact, and a beautiful Art Deco ceiling medallion still exists. Part of the proscenium arch is also still intact.

When the building was purchased by David and Betty Ann Fellner, there had already been significant damage done to the building. They set up the Sedgwick Cultural Center, a not-for-profit organization, in 1995. The Sedgwick Cultural Center's mission was to build community through the arts. A stage was constructed in the Oval Lobby, and performances have taken place in that space ever since.

However, by 2006, despite having brought the Philadelphia community wonderful programming for 10 years, little had changed to repair the Sedgwick Theater. The price tag for a complete building restoration has been suggested to be $10 to $12 million, which does not include the cost to create a business in the space which could truly make the Sedgwick self-sustaining.

The inner lobbies were on occasion home to "Films at the Sedgwick,” which screened public domain films and created an interactive website for the community to take control of the programming. Film Q Public was a list of films up for the community to consider screening. Each film had a plot summary and a streaming movie trailer (when available). Users voted for the films they wanted to see. Those votes were tallied and once the film received enough votes, that film is scheduled.

In May 2010, the Quintessence Theatre Group began renting the Sedgwick for a Shakespeare repertory troupe. Quintessence and its founding director Alexander Burns have staged many classic plays by Shakespeare, Sophocles, Moliere, Oscar Wilde, Chekhov, etc., ever since, and most have been favorably reviewed.