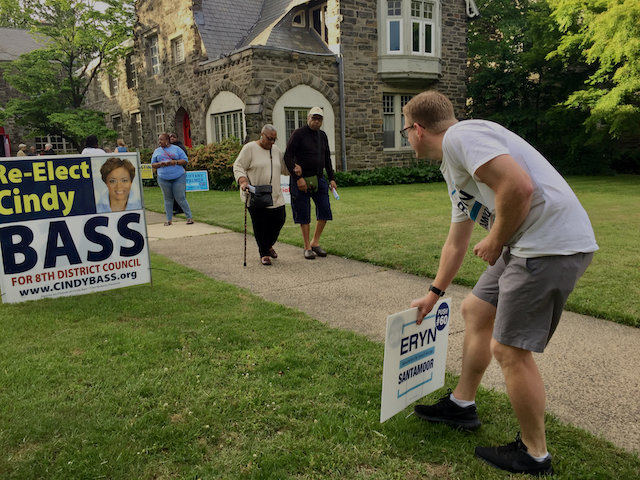 Just after 7 a.m. on Tuesday morning, the day of primary elections, Danny O'Donnell plants a lawn sign for his wife, Eryn Santamoor, former Philadelphia Deputy Managing Director and a candidate for Philadelphia City Council at-large, and watches as an elderly couple exits the polling place at Grace Epiphany Church in Mt. Airy.

As for the results of the elections, the 9th and 22nd Wards voted mostly in line with the results from the city at large. Incumbent Jim Kenney took the Democratic nomination for mayor, and Helen Gym, Allan Domb, Isaiah Thomas, Derek Green and Katherine Gilmore Richardson all won the Democratic nominations for City Council at-large. Though the majority of each of the two wards supported Kenney in the primary, Justin DiBerardinis was among the top five in each ward for the council race. He received 13.64% and 9.11% of the vote in the 9th and 22nd Wards, respectively, and 9th Ward voters also gave 11.53% of the vote to Erika Almiron in the same election.