If there is such a thing as a typical business owner in Chestnut Hill, George Hobe, owner of an art and antiques shop at 8407 Germantown Ave., is not it. 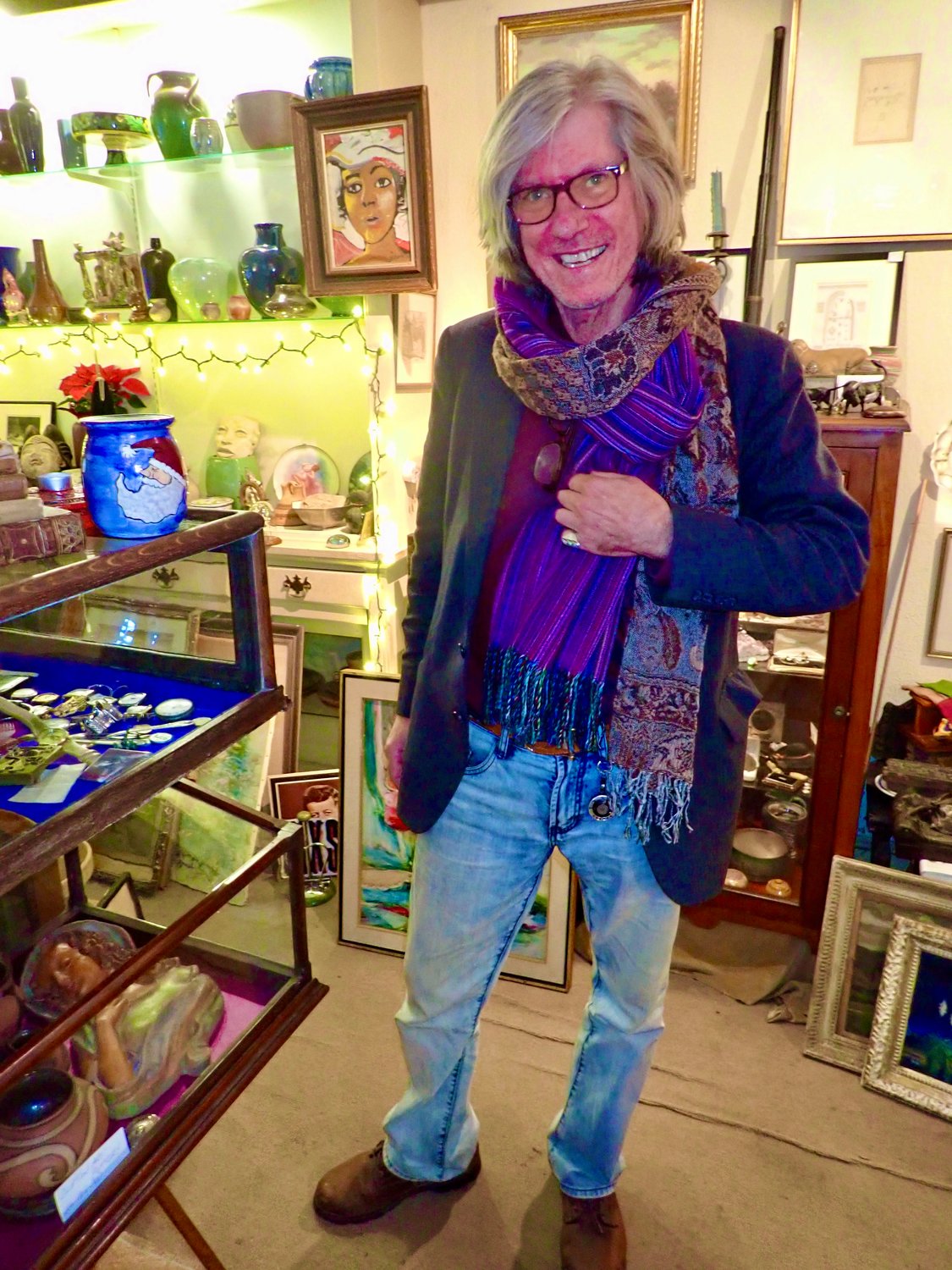 At George T. Hobe Antiques and Fine Art, 8407 Germantown Ave., every inch is chockablock with strange, odd, fascinating objects of all sizes, and Hobe has a compelling or humorous story to accompany each one.
Photo by Len Lear
Posted Thursday, December 22, 2022 12:00 am
by Len Lear and Debra Malinics

If there is such a thing as a typical business owner in Chestnut Hill, George Hobe, owner of an art and antiques shop at 8407 Germantown Ave., is not it. In fact, he sticks out like a vegan at a hunters' convention. As a seven-year-old growing up with five siblings in Upper Saddle River, N.J., Hobe became a “dumpster diver” in the back of supermarkets after his father lost his job with the National Aeronautics & Space Administration (NASA) following the moon landing in 1969.

“I am not ashamed to admit my father would pick me up and drop me into a dumpster in back of a supermarket to pick out food that had been thrown in there,” Hobe said. “Someone on the street recently referred to me as a 'trust fund baby.' I don't know why, but nothing could be further from the truth.”

Hobe flunked out of Bergen County Community College in 1980 after one year because when final exams were being held, Hobe was following the Grateful Dead, seeing nine shows in 14 days. “Overall,” he said, “I saw 90 of their live shows, but after Jerry Garcia died, I had no desire to see them anymore.”

Hobe then decided to try his hand as a chef, so he went to the Philadelphia Restaurant School in 1983 and '84. He graduated and then worked for a succession of area restaurants: A Slice of Heaven, a bakery in Chestnut Hill; Murphy's Bar & Grille in Market Square and Marabella's, owned by former Chestnut Hill resident Gabe Marabella. In each case, however, Hobe lasted only three weeks before being fired. “They all said I was too slow,” he said, “so I knew that career was not for me.”

Hobe then caught a break. He met Marie Colette, an artist from France who owned an art/antique business in Chestnut Hill. He began painting furniture for her, and they also began a romantic relationship, although she was 38 and he was 22. The relationship continued for 18 years. Colette, once a constant presence on the 8400 block of Germantown Avenue with her frisky Chihuahuas, is now back living in France.

Apparently, Hobe learned enough from Colette and from his own research and travels that he found his niche in buying and selling art and antiques, becoming a sort of “Antiques Roadshow” maven. For example, in 1997, he saw a painting that appealed to him in a stamp-and-coin shop in the Lawndale section of the Northeast. It had been brought to this country by German immigrants in 1898. Hobe paid less than $100 for it, and two months later he sold it for $20,000!

“With that money,” he explained, “I was able to buy a place on an island off the coast of France, which I still have. I visit it as often as possible... I have been told that you only get one of those windfalls in a career, but that turned out not to be true.

After learning its provenance, Hobe was able to get Sotheby's, the world's largest broker of fine art, antiques, jewelry and collectibles, to put up the painting for auction. The painting sold for $200,000!

Hobe, who opened his own Chestnut Hill shop in 1988, was able to purchase the building that houses his shop, thanks to the auction windfall. He now specializes in oil paintings from 1780 to 1950 from around the world, with an emphasis on European and American schools. Hobe provides appraisal and restoration services including repairs, cleaning, canvas stretching, and reframing. The shop is reminiscent of Charles Dickens' “Old Curiosity Shop,” every inch chockablock with strange, odd, fascinating objects of all sizes, and Hobe has a compelling or humorous story to accompany each one.

To quote Henry David Thoreau, the offbeat Hobe moves to the beat of a different drummer. For example, the phone number on his awning and website has been out of service for four years. (Ditto the email address.)

But if you visit yelp.com, the nation's largest website for consumer reviews of retail businesses, you will find nothing but five-star reviews of his shop. For example, Karen V., of Glenside, writes: “He is one of the most honest dealers you will ever find and incredibly friendly and helpful. You never know what you will find in his shop.”

Nico B., of Mt. Airy, posted: “Not only will you love the eclectic selection of items, but you will leave with a smile on your face. Mr Hobe's integrity, intelligence and kindness leave a lasting impression, regardless of whether you decide to purchase an item or not.”

For more information, call 215-206-9090. Len Lear can be reached at lenlear@chestnuthilllocal.com