A boom with Zoom for esteemed 'Rembrandt of Mt. Airy'

At the beginning of the pandemic, countless music and art teachers in the area and around the country lost their students and their income, but their ingenuity and resilience have helped many of them …

A boom with Zoom for esteemed 'Rembrandt of Mt. Airy' 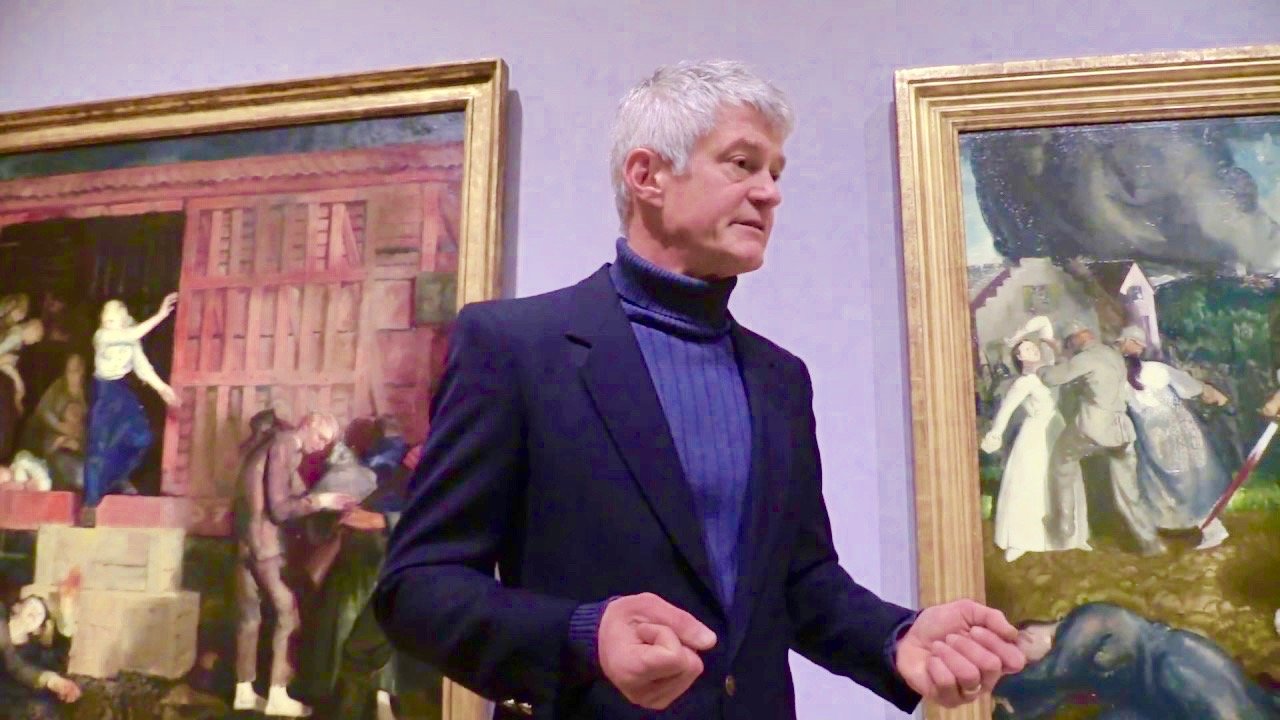 Long-time Mt. Airy resident Paul DuSold, one of Philly’s most prominent portrait painters, has been an instructor at Woodmere Art Museum for 22 years, but he is now teaching via Zoom.
Posted Friday, November 13, 2020 10:40 am
by Len Lear

At the beginning of the pandemic, countless music and art teachers in the area and around the country lost their students and their income, but their ingenuity and resilience have helped many of them recover to a significant extent and even thrive. For example, Paul DuSold, 57, a long-time resident of Mt. Airy, superb portrait painter who has been called “The Rembrandt of Mt. Airy” and instructor at Woodmere Art Museum for 22 years, has hit a home run with his popular online classes and instructional videos.

“Over the years I have taken Paul's portrait painting classes at Woodmere, which were great,” said JoAnn Goodwin last week, “but it was always kind of a hassle to drive there from New Hope, where I live. During the pandemic, though, Paul started to teach online with Zoom by copying famous portraits from history.

“Paul not only can paint wonderfully, but the whole time he’s painting, he keeps up a constant art history lesson. He is talking about the birth of individualism in portrait painting in oil paint this semester ... It is really fascinating to watch, and some of the students in their little Zoom boxes seem to be painting along with him. Taking art classes online has been a such a joy for me during the pandemic that I really hope the practice will continue after this all ends.”

DuSold was born in Chicago but lived in Southern California as a child and then went to high school in the mountains of North Carolina. He has lived in Philadelphia for 35 years. DuSold, who graduated from the Pennsylvania Academy of Fine Arts (PAFA) in 1985, was particularly inspired by one teacher there, Arthur DeCosta, who died in 2004.

“I learned virtually all I knew about painting from pestering Arthur,” DuSold recalled. “He told me in my second year at PAFA to go to the members of the faculty and ‘pick their brains.’ I thought, ‘Arthur, you know everything I need to know; I’m going to pick YOUR brain.’ And so I asked him every question I could think of. Sometimes even when I knew the answer, I would still ask the question just to see how he would consider it from some unexpected angle. It was the greatest of learning experiences!”

Although he has been doing more landscape and cityscape paintings in recent years, DuSold is known primarily for his commissioned portraits of VIPs, which can be seen on the walls of many of the area’s major institutions, such as the Franklin Institute, Jefferson Medical School, Graduate Hospital, Mellon Bank, the Union League of Philadelphia, the American College of Physicians, Provident Mutual Life Insurance Co., Pennsylvania Hospital, et al.

What prompted DuSold to add cityscapes to his repertoire was the fact that “I used to ride the Chestnut Hill West line into center city and be enthralled with all of the tremendous possibilities for paintings I would see from the ‘rooftop’ vantage of the train line. I was visually fascinated by the textures and spaces of the buildings and vacant lots and the effect of time.”

DuSold is currently painting a portrait of a woman named Joan Countryman for Germantown Friends School. She was the first African American to graduate from GFS and was also the first director of Oprah Winfrey's school for girls in South Africa.

When asked what was the best advice he ever received, DuSold replied, “Two things come to mind: My mother once told me that people will always be glad to help you as long as you show them you are grateful, which is very true, and my mentor at PAFA, Arthur DeCosta, said you can paint anything you want, as long as you make it personal. That was also very true and profound.”

DuSold’s studio is in his house near Carpenter's Woods, where he and his wife, Sharon, live with their daughter, Olivia, an assistant teacher in fifth grade at GFS. Sharon teaches piano on Zoom, although some students have taken a “sabbatical,” and DuSold's sister, Michelle, who works at the University of Pennsylvania, and her husband, Frederic, and their three children live nearby on West Johnson Street. (DuSold used to get his exercise by bicycling downtown to work before his home studio was created.)

For more information, visit pauldusold.com. Len Lear can be reached at lenlear@chestnuthilllocal.com