A cache of love letters uncovers an amazing family story

Hoerlin, who served as Health Commissioner of Philadelphia and now lives in Center City, taught public health at the University of Pennsylvania and has been a visiting lecturer at Haverford College and Oxford University.

A cache of love letters uncovers an amazing family story 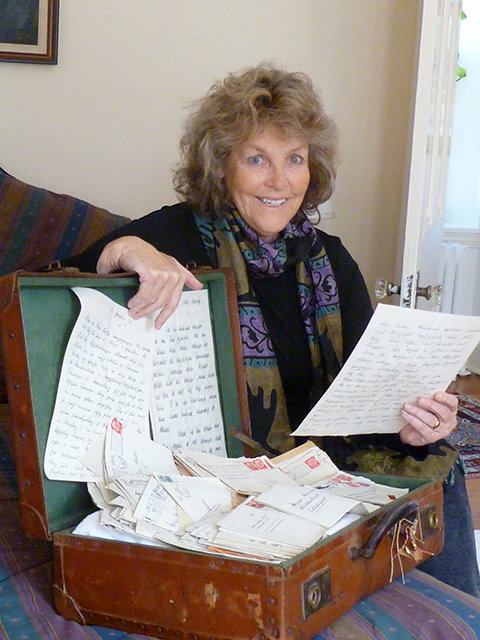 Bettina Hoerlin looks through some of the 500 letters she discovered in an old suitcase. Hoerlin’s parents wrote the letters to each in the 1930s when they lived in Nazi Germany before escaping to the U.S.
Posted Thursday, April 28, 2022 4:54 pm
by Len Lear

In 55 years of writing for newspapers and magazines, mostly in the Philadelphia area, I estimate that I have written about 8,000 articles. I have completely forgotten most of them, but one of the two or three most unforgettable is undoubtedly a 2012 article about Bettina Hoerlin, a Chestnut Hill resident for 24 years and a Mt. Airy resident for 20 years before that.

Hoerlin, who served as Health Commissioner of Philadelphia and now lives in Center City, taught public health at the University of Pennsylvania and has been a visiting lecturer at Haverford College and Oxford University. She is the author of “Steps of Courage: My Parents’ Journey from Nazi Germany to America.” It is one of the most compelling, inspirational books I have ever read, and she will be discussing it at 10:30 a.m., Sun. May 1, in Doran Hall at Springside Chestnut Hill Academy (SCH).

The event is co-sponsored by Booked, a Chestnut Hill bookstore, and Folkshul, a Jewish Sunday school and community based at SCH.

After reading “Steps of Courage,” I mentioned to Hoerlin that I thought it could be made into a magnificent movie, and she told me last week that this is a possibility. “Recently, an Austrian filmmaker approached me about doing a documentary film about the book,” she said. “We are in discussions, but there is nothing specific yet.”

The seed of Hoerlin's book was planted in 1997, when she and her husband, Gino Segre, retired chairman of the physics department at the University of Pennsylvania and author of several science books, were moving from Mt. Airy to Chestnut Hill. (Hoerlin holds a doctorate degree in public policy sciences.)

In the course of moving, Hoerlin came across an old leather suitcase that she did not recognize. (How many of us who have lived in homes for several years have boxes in an attic or basement that we have not looked at in years?) Eventually, she went through the suitcase and discovered more than 500 letters that her parents, Kate Tietz Schmid and Hermann Hoerlin, had sent to each other while living in Nazi Germany from 1934 to 1938.

Schmid, a beautiful Munich resident who was half-Jewish, was originally married to Willi Schmid, a prominent cellist and musicologist who had been largely responsible for the revival of baroque music in Germany. Although he was completely apolitical, Schmid was dragged from his house on June 30, 1934, "The Night of the Long Knives," and murdered along with dozens of others. The Nazis later delivered Schmid's body in a coffin to Kate and apologized. They had actually been looking for another man named Willi Schmid. They even paid her reparations. The infamous Rudolf Hess personally apologized to her.

Kate, who had three children with Schmid, later met Hermann Hoerlin, a handsome, world-record-setting mountaineer, physicist and anti-Nazi who openly fought the Nazis' attempts to co-opt athletic organizations and throw out Jews and other "non-Aryans."

Kate and Hermann eventually got married in 1938. Because the Nuremberg Laws prohibited marriage between Aryans and Jews, they were on the verge of being arrested by the Nazis and sent to a concentration camp when Hermann used his influence with an old family friend, Fritz Wiedemann, to help Kate, Hermann and her three children get out of Germany. Wiedemann had been Hitler's commanding officer in World War I and later became a high-ranking Nazi official.

When Hoerlin discovered the box of their handwritten letters after her move to Chestnut Hill, she was in shock. "I never knew these letters existed," she said. "How many of us have the chance to peer into our parents' love life many years later?”

She proceeded to take courses in German so that she could read them, and then spent more than a year translating more than 450 letters. (A German woman she knew translated the other 50.)

"These letters deserve to be preserved for future generations,” Hoerlin said. “My parents' lives were shaped by world events, though they never talked about it. I felt it was up to me to tell their remarkable story, and in the process, I discovered so many secrets and mysteries, which are now available to everyone.”

Most of the 500 letters that Bettina translated, along with relevant documents from the Nazi government, are now in the Leo Baeck Institute archives, the largest international research institute devoted to the history and culture of German-speaking Jews. The institute has offices in New York, London, Berlin and Jerusalem.