A developer asks neighbors for input

Mt. Airy residents are so used to some developers erecting high-rise apartments without apparent regard for the impact on local traffic or quality of life that they were not sure what to expect when Lee Hecht, president of Able Plumbing Supply, invited them to a Zoom meeting.

A developer asks neighbors for input 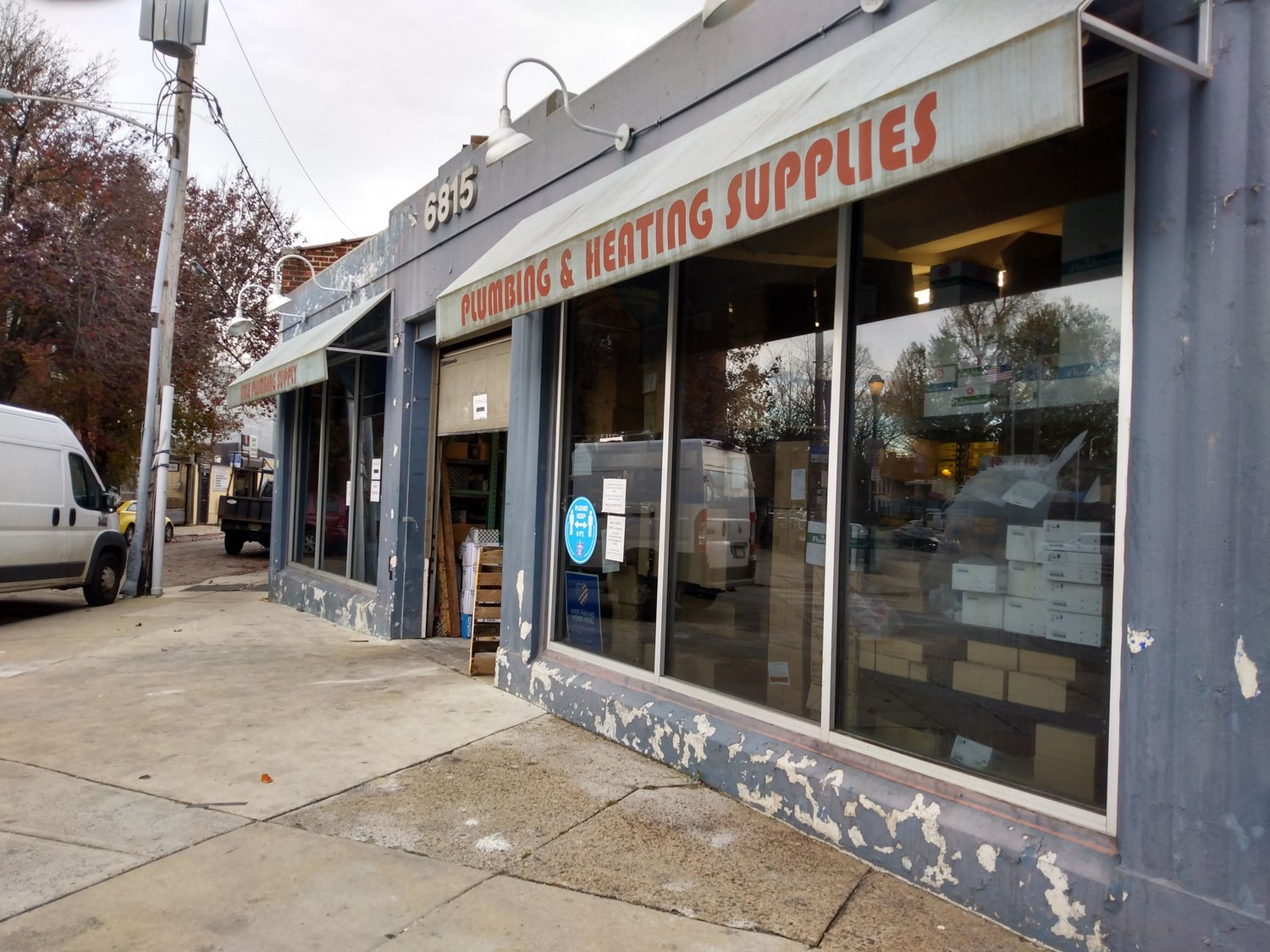 Located on the corner of Germantown and Meehan, Able Plumbing Supply was started by Hecht’s grandfather in the 1950s. Hecht is not moving because business has been bad.
S. Friedman
Posted Wednesday, December 8, 2021 11:29 am
6815 Germantown Ave.
Philadelphia, PA 19118
View larger map
by Stacia Friedman

Mt. Airy residents are so used to some developers erecting high-rise apartments without apparent regard for the impact on local traffic or quality of life that they were not sure what to expect when Lee Hecht, president of Able Plumbing Supply, invited them to a Zoom meeting. The purpose? To discuss the future of the property after Hecht moves his three-generation family business to East Germantown.

The most perplexing news to residents was that the property would not be renovated but demolished.“Structurally, it’s become a nightmare,” said Hecht. “It needs a new roof and, if I do that, I would essentially have to rebuild the whole thing. Plus, my business requires constant loading and unloading of trucks, which is an annoyance for area residents.”

By law, Hecht doesn't have to ask anyone’s opinion. The 8,000-square-foot property’s CMX-2 zoning allows him to develop the space however he chooses, as long as there is commercial space on the first floor. If he wanted to build yet another apartment complex, no one could stop him. But that is not how Hecht rolls. This guy cares.

Located on the corner of Germantown and Meehan, Able Plumbing Supply was started by Hecht’s grandfather in the 1950s. By now, the store is a neighborhood fixture. Hecht is not moving because business has been bad. In fact, during the pandemic, business has been good.

“When you commute to work every day, you are only in your home for three or four hours before you turn off the lights. You don’t have time for a renovation project. But when you are home 16 hours a day, you start to notice that your kitchen and bathroom need an update,” said Hecht, who also has a showroom in Glenside, Flo Baths & Kitchens, which is managed by his wife, Rachel Lucks Hecht.

Participants in the Zoom meeting were hesitant at first. But then the questions started rolling in.

“Will it be another apartment high-rise?” asked Jonora Eggleston, expressing the community’s worst fear.

You could feel the release of tension.

Kendra Gudgeon, from the East Mt Airy Neighbors Association, expressed concern about the space being vacant for a long period of time. Hecht assured her, “We will move as expeditiously as possible.”

Allyson Lewis, who lives nearby, raised a point: “We are moving away from brick and mortar stores to click and order, so your business would have to offer a service not available online.”

“There is no intention of repeating what was there. It will not disrupt the commercial corridor anymore,” said Hecht.

Thompson asked if art groups could use the space. Hecht was intrigued.

Right now, the property lacks what realtors call “curb appeal.” It’s a long, squat, one-story building built on an odd angle, not quite on Germantown Avenue, not quite on Meehan, but straddling both. Its front door is open like a gaping mouth while the last of the plumbing supplies are carted away by the truckload.

Days after the meeting, Weinstein described it as “great.”  Hecht agreed. “It was very positive,” he said.

So what’s the future of 6815 Germantown? Maybe a community arts center. Maybe a restaurant. Or maybe an idea that has yet to be expressed.