A noted writer takes readers on a tour of apocalypse preparedness

Every site described in Mark O'Connell's "Personal Journey" can be seen on YouTube. So, why write a book? What does a book offer that an assemblage of pixels does not?

A noted writer takes readers on a tour of apocalypse preparedness 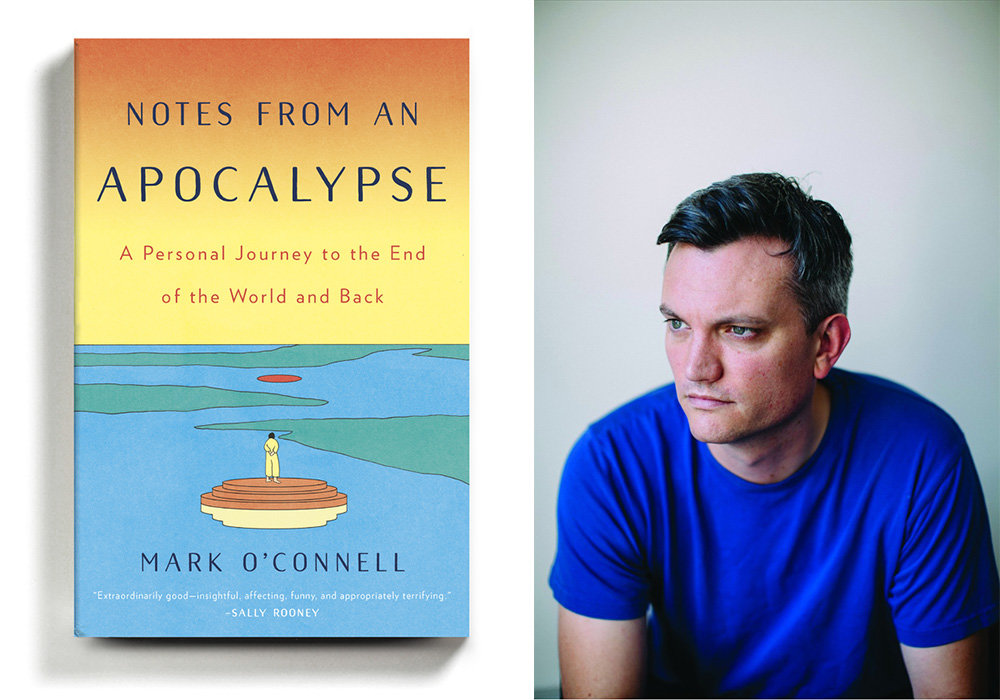 Mark O’Connell travels to the bunkers and private doomsday shelters of the rich and famous in his latest book, “Notes from an Apocalypse.”
Posted Thursday, January 21, 2021 11:00 am
by Hugh Gilmore

Every site described in Mark O'Connell's "Personal Journey" can be seen on YouTube. So, why write a book? What does a book offer that an assemblage of pixels does not? And why take the time to read one when a photograph can be taken in so quickly? The answer to those questions lies in the special magic of the printed word, especially when those words come from the pen of an inspired traveler. When we read good travel writing, we take a second journey – into the minds of brilliant people as they walk about the places they describe.

Mark O'Connell is a Dublin-based writer noted for his perceptiveness and keen wit. He's a regular columnist for Slate, the New Yorker, and Millions, among many other well-known cultural/intellectual magazines and newspapers. In 2017 he published "To Be a Machine: Encounters with a Post-Human Future."

His new book, "Notes from an Apocalypse: A Personal Journey to the End of the World and Back," was published in March 2020. Not intended to be so, it has nonetheless arrived in a timely manner, given the pandemic and other wobbles of our current world.

The story begins simply enough, "It was the end of the world, and I was sitting on the couch watching cartoons with my son." His son was watching an animated bear and giggling while O'Connell browsed YouTube videos on his cell and happened on an excruciating one about a starving polar bear raiding trash cans. The contrast between papa's bear and baby's bear intruded the "real" world into Mark's quiet afternoon. What kind of world was his son going to grow up into?

O'Connell says that he is almost neurotically obsessed with eschatology (originally a theological term for the study of the final disposition of the soul and of humankind, it is much used today to refer to the notion of the end of life on earth as we know it – most specifically, human life). For this book, he turns to visiting and trying to understand many of the survivalist, prepper, end-of-worlder, revenanter, and other groups who are trying to make sure they themselves survive when the rest of the world possibly goes belly-up. He calls these trips "reverse pilgrimages" to see the End of the World. Apocalypse Now, if you will.

His first trip is to the former U.S. Army Fort Igloo facility, built by the Army Core of Engineers in 1942 and used until 1967 as a fortress for storing bombs and munitions. After years of neglect, a series of private real estate investors purchased the grounds. Currently they are owned by a property development company known as The Vivos Group. The former storage units have been refurbished, their ad says, as "575 private military-built, concrete and steel, all-risk bunkers...now repurposed and affordably priced – ready to provide life-saving shelter for your entire family or group."

This doomsday preparedness space is intended to help individuals "weather the end of the world in the style and comfort to which they had become accustomed." (The ads on YouTube intercut highly selected footage of the "homes" with pictures of cars burning, stores being looted, and, people, mostly Black, rioting.) The company store website sells weapons, survival gear, and repellents of all kinds to keep out what former-president Trump used to call "bad" people. After touring the area and some of the individual bunkers, O'Connell calls the project "a nightmare inversion of the American Dream."

From there O'Connell travels to a sneakier and more insidious type of survivalism. While the rest of us have been napping, Silicon Valley billionaires, most famously Peter Thiel (founder of PayPal), have been buying large, luxurious plots of ground, and even installing bunkers – just in case – in New Zealand. A few have also (controversially) managed to attain New Zealand citizenship in roundabout ways. O'Connell travels to Auckland and looks around, but gets nowhere close to the heavily gated compounds the super-rich have set off for themselves. Thiel, judging from some statements he's made, believes in sovereign leadership, regarding democracy and true freedom to be contradictions.

O'Connell's other travels include attending a conference of the Mars Society's 21st annual convention at the Pasadena Convention center. One of the prominent proponents of the colonization of Mars is the noted inventor, manufacturer, and futurist, Elon Musk, who's on record as saying that Mars will be the "back-up planet" for when things get too hellish here on Mothership Earth.

The culmination of O'Connell's book is a reverse-eco tour of Pripyat, the workers' town in Ukraine destroyed by the atomic contagion at Chernobyl. Atomic devastation sites, despite their ongoing toxic radiation emissions, have become "dark tourism" destinations. He trudges along with a group of fellow tourists through eerily abandoned classrooms, factories and apartment buildings that the residents were told to leave immediately when the famous Reactor No. 4 burned up.

The place descriptions in this book are sharply and wittily observed. O'Connell is also funny and honest. But for the most part the journey he takes is a philosophical one. He offers here a meditative survey of humanity's relationship with a world being ruined more every day. In a way, it's a vacation through a heart of darkness where selfish, destructive, me-first people try to escape from themselves.

At the end, while O'Connell wears out the carpet at home worrying about the Big Picture, his wife, who is nursing their second child (a daughter), reminds him that life goes on. He reluctantly concludes with, "And so lately, I have lost my taste for cosmic nihilism, cosmic despair. Lately I have been glad to be alive in this time, if only because there is no other time in which it's possible to be alive."

He adds, "The world is also an undeniably interesting place. You kind of have to hand it to the world, in that sense." Fairly gray advice, but it's rather refreshing, for a change, to have a prophet go into the desert and come out with no message other than a smile and a shrug.

Hugh Gilmore adds that he was glad to see the YouTube footage of the sites described by O'Connell, but is glad he saw those images after he finished reading the book.