You wonder if the historical Eleanor Roosevelt was as captivating as the Eleanor you see on the stage at Act II Playhouse. 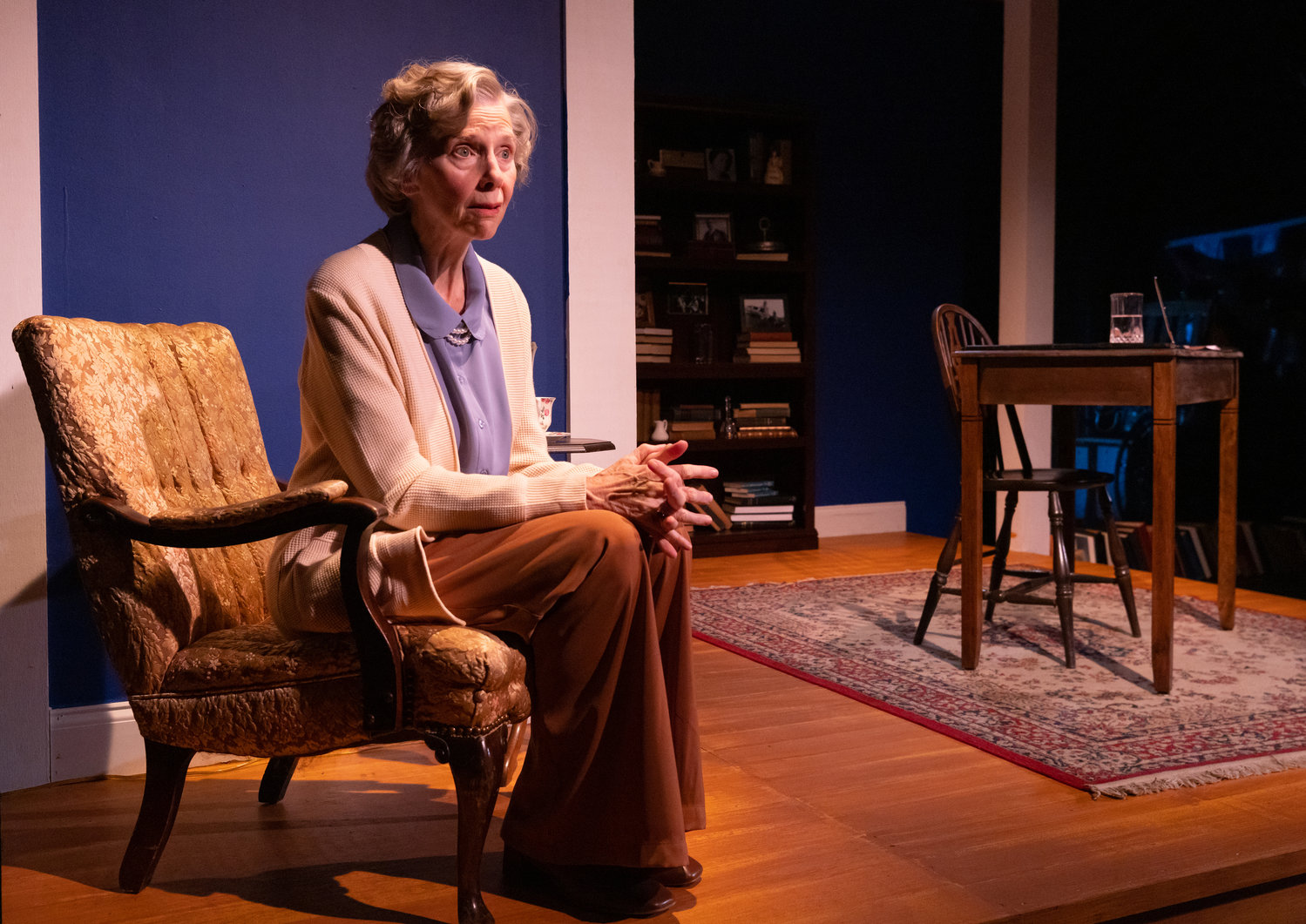 Penelope Reed, winner of the Barrymore Lifetime Achievement Award in 2017, moves easily about the stage as she plays the character of Eleanor Roosevelt.
Photo by Mark Garvin
Posted Thursday, November 3, 2022 12:00 am
by Hugh Hunter

You wonder if the historical Eleanor Roosevelt was as captivating as the Eleanor you see on the stage at Act II Playhouse. In the regional premiere of "Eleanor" by Mark St. Germain, she holds you in thrall for 90 minutes, hanging out on her favorite green bench at the Rock Creek Cemetery in Washington D.C.

This Eleanor, you see, is a ghost (and a restless ghost, like those troubled souls who haunt nine-year old Cole in the movie "The Sixth Sense.") As Eleanor remarks, "Who are we but the choices we make...I can't help doubting those choices...I need to know...I can't rest until I do."

In her restiveness, Eleanor's account is not chronological. She jumps around in time, linking up life events only when they help answer the question, "Who am I."The Act II production creates a portrait of Eleanor as a surging mix of contradictions and you cannot take your eyes off her.

You learn a lot about the former first lady. Her mother Anna was a fabulous beauty who despised her daughter's plain looks. Flashy cousin Alice (Teddy's daughter) was a life-of-the-party debutante who ridiculed Eleanor's buck teeth. Early on, Eleanor learned she could not root her self-worth in glamor.

Eleanor hit her stride at age 15 when she was shipped out to Allenswood Boarding Academy in Wimbledon.  Headmistress Marie Souvestre taught her girls to be assertive and independent. Eleanor thrived and was sad to leave the school, forced to attend the debutante balls of New York high society.

You need a special actress to pull off "Eleanor." Kate Brennan directs Penelope Reed, winner of the Barrymore Lifetime Achievement Award in 2017. Reed's elocution is lightly patrician and she moves easily about the stage, wearing the apt, sensible clothes of designer Janus Stefanowicz. (Eleanor knew this much about herself: there was no point in trying to be stylish.)

Though this is a one-woman show, the stage feels populated because Reed mimes the people in her social circle. She also injects humor with wink-and-nod audience engagements, and is bemused to find a Gatorade bottle and a "Make America Great Again" button in the gutter trash.

Thanks to scenic designer Parris Bradley, the stage set is dynamic. Projections pour over the rear wall. On stage left a window-like structure serves as another projection panel. It also turns into a mini stage when Reed mounts the front sill to mimic someone with a sort of good-willed scorn.

St. Germain's Eleanor is a woman of the future. Unfit for domesticity, she becomes a vocal advocate for liberal causes. She sometimes quarrels with FDR himself in her daily newspaper column "My Day," hosts a weekly radio program and globetrots tirelessly. One newspaper runs a sarcastic headline, "Eleanor Roosevelt spent the night in the White House."

She is also a woman of the past. The political environment she lived in is long gone. The media she learned to use has expanded to take on a life of its own. Today, the Roosevelts could never survive so easily the many personal problems and scandals that the show lays bare.

But most of all, "Eleanor" is a timeless portrait of the mystery of the human personality. A penumbra of irony surrounds Eleanor's observation that she never truly knew FDR. We do not quite know Eleanor Roosevelt either, and neither did Eleanor.