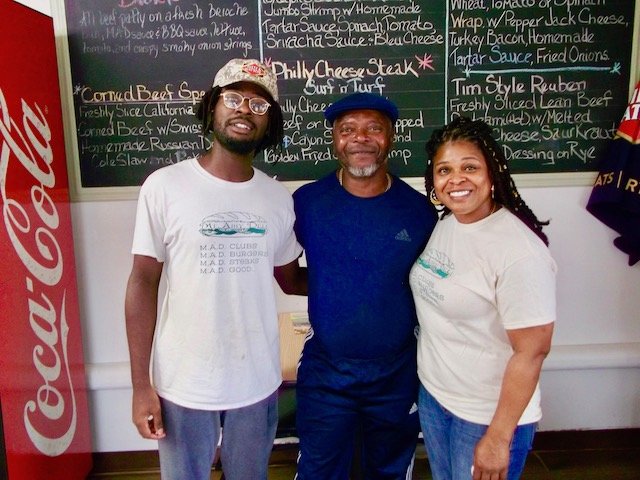 You'd think that after 24 years in the same location, everyone in a neighborhood would be familiar with a successful business. But in the case of the Mt. Airy Deli, 7200 Devon St. (intersects with Mt. Airy Avenue), you'd be surprised.

“We still have people from the area come in and say, 'I've lived here for a long time and never knew you were here until I saw the pictures on Instagram,” said Nicole Thomas, 44, who owns the deli with her son, Jarrod, 23. Last year, they took it over from Nicole's parents, Coker and Melanie.

(I must admit that my wife and I have lived on Mt. Airy Avenue for more than 24 years and also were not aware of the Mt. Airy Deli until two weeks ago, when co-worker Leslie Cerf told me how good their food was.)

Considering her educational and business background, Nicole might be the last person you'd expect to spend about 80 hours a week making and selling sandwiches, wraps, chicken wings, etc. A lifelong resident of Mt. Airy, Nicole went to Jenks Elementary School in Chestnut Hill, Bodine High School for International Affairs in Northern Liberties and Drexel University, where she graduated in 2000 with a major in human resources management.

After college, Nicole worked for a company that consulted with startup businesses, bringing them up to speed on technological developments. For 17 years she worked there but also helped out in her parents' deli on weekends.

“We all can’t get away from it,” said Nicole. “My grandfather’s sister owned a Chinese restaurant in Jenkintown in the 1930s. My grandfather was a gambler, but he had an amazing palate, and he cooked for people like Billie Holiday, Paul Robeson and professional boxers. He taught us all how to cook. My dad was the same way. He would go to a restaurant and come home and then cook the exact same meal, and it was just as good. My dad and uncle also had a deli in North Philly.”

Late last year, Nicole’s parents announced that they were retiring and would be selling the deli.

“That’s when I made the decision to leave my corporate job and run the deli,” said Nicole. “I wanted to keep it in the family, so I took over on Dec. 31 of 2018. I used to be so exhausted because of the long hours. Now I am still physically tired, but I am full of energy. Designing software was gratifying also, but I own this deli. It’s a different feeling; it’s my legacy. My son is with me, and his daughter, Essa, is only 2 now, but I can’t wait until she is 5 and has a lemonade stand out front.”

As of this week, Mt. Airy Deli has been reviewed 94 times on Yelp, the nation’s largest customer review website. The average rating has been 4.5 stars out of a possible five.

According to Nicole, “It's word of mouth that has kept us in business all these years … We rely on social media, too. We have about 5000 Instagram followers, and the average number of people watching one of our videos is 3000. My dad, ‘Mr. Deli,’ does the videos on it. People come in and show me pictures on their phone and say, 'I want that,' and it has to look exactly like the way it looks online, or else.”

Mt. Airy Deli is located across the street from Fred's Mt. Airy Motors.

“When we started here, we did not even have a grille,” said Coker. “We just had cold sandwiches. Now everybody has cheesesteaks, but not everybody also has salmon cheesesteaks or salmon burgers.”

During my recent visit, I took out the shrimp po’ boy sandwich (as good we have had in New Orleans, where it is a virtual staple), wings, a salmon wrap and sweet potato fries. All were superb. There are five dishes on a blackboard that have been there for five years “because they just keep selling.” A couple of popular new dishes are the Mediterranean salad and blue cheesesteak, according to Nicole, whose own favorite place to eat is the Persian Grill in Lafayette Hill.

When John Street ran for mayor the first time, his aide, Ron White, contacted Mt. Airy Deli and said they needed 1,500 hoagies for a political event.

“I couldn't even get them all into the car,” said Coker. “We drove down Broad Street at three miles per hour.”

Before starting the Mt. Airy Deli 24 years ago, Coker was a field consultant in charge of seven 7-11 stores.

“Each one did about $1 million per year,” he said, “but they reduced the work force by many, many people over the years, and finally it was my turn to be cut out. After a year I thought to myself, 'I know how to run a store,' so I bought this building 25 years ago. It was previously a store called Berger’s.”

Does Nicole ever regret giving up her career in the corporate world?

“I do not. I still get together with people from the consulting firm in Center City, and I don't look back at all. In fact, my eyes glaze over when they talk about work.”

For more information about Mt. Airy Deli, call 215-242-9274 or visit MtAiryDeli.com. You can reach Len Lear at lenlear@chestnuthilllocal.com