On March 26, local resident Stephen Chaplik wrote on the East Mt. Airy Nextdoor website, “Sad news. Just ordered food from Yu Hsiang Garden. Vince (the owner) told me that their lease is up, … 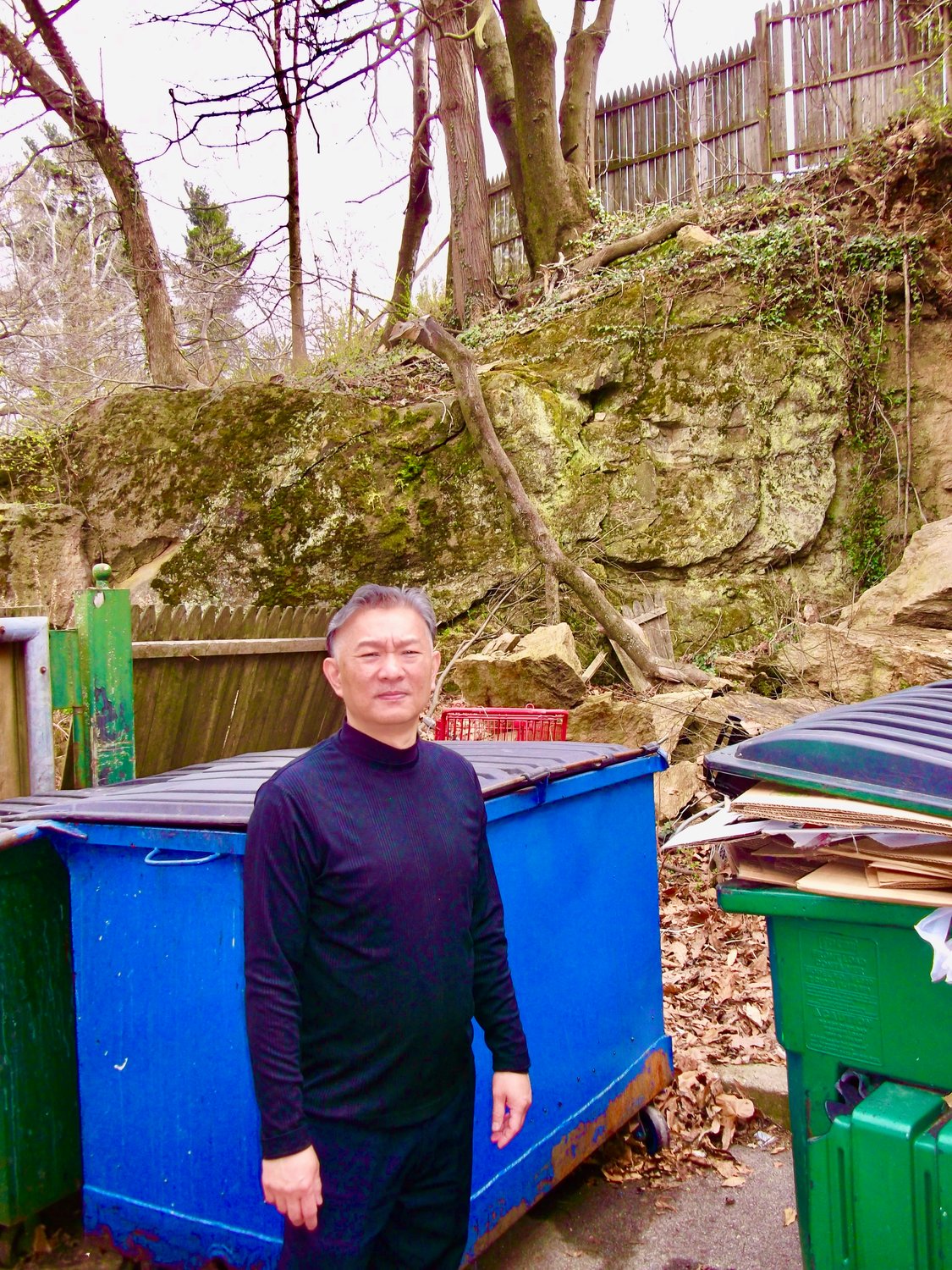 Vincent Ly stands in the rear of his about-to-close restaurant, Yu Hsiang Garden, in the Chestnut Hill Plaza. Ly wanted to show that several huge trees are perched precariously on the edge of gigantic mounds of earth. “One of them could fall at any time and cause lots of damage,” he said. “One did fall on Christmas Eve, 2020, and crushed a dumpster.” Photo by Len Lear
Posted Thursday, April 14, 2022 6:00 am
by Len Lear

On March 26, local resident Stephen Chaplik wrote on the East Mt. Airy Nextdoor website, “Sad news. Just ordered food from Yu Hsiang Garden. Vince (the owner) told me that their lease is up, and the owner doesn’t want to renew. They will probably be out by the end of next month. Sucks.”

After seeing this post, I went to the restaurant, which we first went to more than 30 years ago and were impressed with their white tablecloth service, plush booths, and large plants. About 25 years ago, we were having dinner there and happened to notice that Grover Washington, Jr., the late jazz legend and West Mt. Airy resident was seated in the next booth with his family. I went over and introduced myself, and he was very gracious.

When I went to the restaurant, located in the Chestnut Hill Plaza at 7630 Germantown Ave. two weeks ago, to ask if they were really closing, Jennifer Ly, co-owner (with husband Vincent), sobbed through non-stop tears, "We have so many customers who have become good friends. This is so hard on us; I cry every day. We have been through so much, including the pandemic, but we have come through. And now this!”

Jennifer showed me the letter they had received, dated March 22 and signed by Kent Silvers, Jr., representing the landlord, Provco Chestnut Hill, LLC. It stated in part: “Please have your personal property removed by that date (April 30) and the premises in the condition required under the lease.”

The Lys have talked to a lawyer at the Philadelphia Human Relations Commission about the possibility of filing a racial bias complaint since the three stores in the strip mall being evicted (Yu Hsiang Garden, a dry cleaner and a nail salon) are all Asian American-owned, and the one business not being evicted, The Eye Institute, is not Asian-owned. Karen Forman, a lawyer at the Commission (and Mt. Airy resident), confirmed speaking to the Lys, but as of press time, no official complaint had been filed.

Last week we made repeated attempts to contact The Provco Group, the real estate management company that owns the Chestnut Hill Plaza, but they did not respond to the phone calls or email messages.

“I cannot thank the people of Mt. Airy and Chestnut Hill who have supported us all these years,” said Vincent. “It has been a real privilege to serve our customers. This is not just about making a living. It is so much more. We have served children 5 and 6 years old who now have children of their own and still come in. One man came in here recently and said the little girl we used to wait on is now a Princeton graduate and is now getting married.”

It was an immediate hit. When we first visited the restaurant in September of 1989, it was beehive-busy, so much so that we had to wait more than 30 minutes for a table in midweek, and a few weeks later we waited an hour for a table on a weekend night.

The restaurant was opened by the Lam family, which had also opened a Yu Hsiang Garden in 1985 in Glenside and one in center city in 1991. (Both closed years ago.) For decades the Chestnut Hill restaurant has been managed by Vincent Ly, 56, and his wife, Jennifer, 59, who is the sister of the original owner, Phi Lam.

Born in Vietnam, Vincent's parents - his mother was an incense manufacturer and distributor and his father was in the wholesale paper manufacturing business - brought Vincent to the U.S. when he was 11 in 1977, following the Communist takeover of South Vietnam.

Vincent graduated from Northeast High School in 1984 and earned a degree in business management from Temple University, with a minor in real estate.

“My mom only had a fifth grade education,” said Vincent in an earlier interview, “but she wound up with 40 employees. She always emphasized the importance of education, and she told me that as long as I’m happy with my work, whatever it is, then that’s what really counts.”

When Vincent attended Northeast High School, he worked after school for three years at the late, much-lamented Under the Blue Moon restaurant, and got hooked on the business. “I loved it,” he said. “Gene Gosfield (legendary owner who died in 2007) was a very nice man. I ate there three times a week, which was great. I prepared salads and worked the grill and the fryer.”

The Lys have two sons — Justin, 29, a graduate of Temple Medical School, and Jordan, 28, who has a music degree from Temple but is now working for a Louis Vuitton clothing store in the King of Prussia Mall. “We are very proud of their educational accomplishments,” said Vincent, “but even more so of the men they have become.

“We have overcome the closing of Germantown Avenue because of massive construction, the great recession of 2008 and the pandemic, but this is so difficult, to cut us off from all the customers we care so much about. The letter came as a complete shock. We had planned to work for several more years and leave on our own terms.”

When asked if they plan to start over in another location, Vincent said, “We have no plans right now, but I would never say never. When the staff scatters, you can't get them back, and starting a new kitchen is so hard, but we do want to be part of the community.”

For now, you can still visit yuhsianggarden.com. Len Lear can be reached at lenlear@chestnuthilllocal.com Tom Beck contributed to this article.