Days before fire ripped through the historic Hiram Lodge on Germantown Avenue last week, local artist Judy McCabe Jarvis had just captured the building in paint. It was a lucky accident, she said. 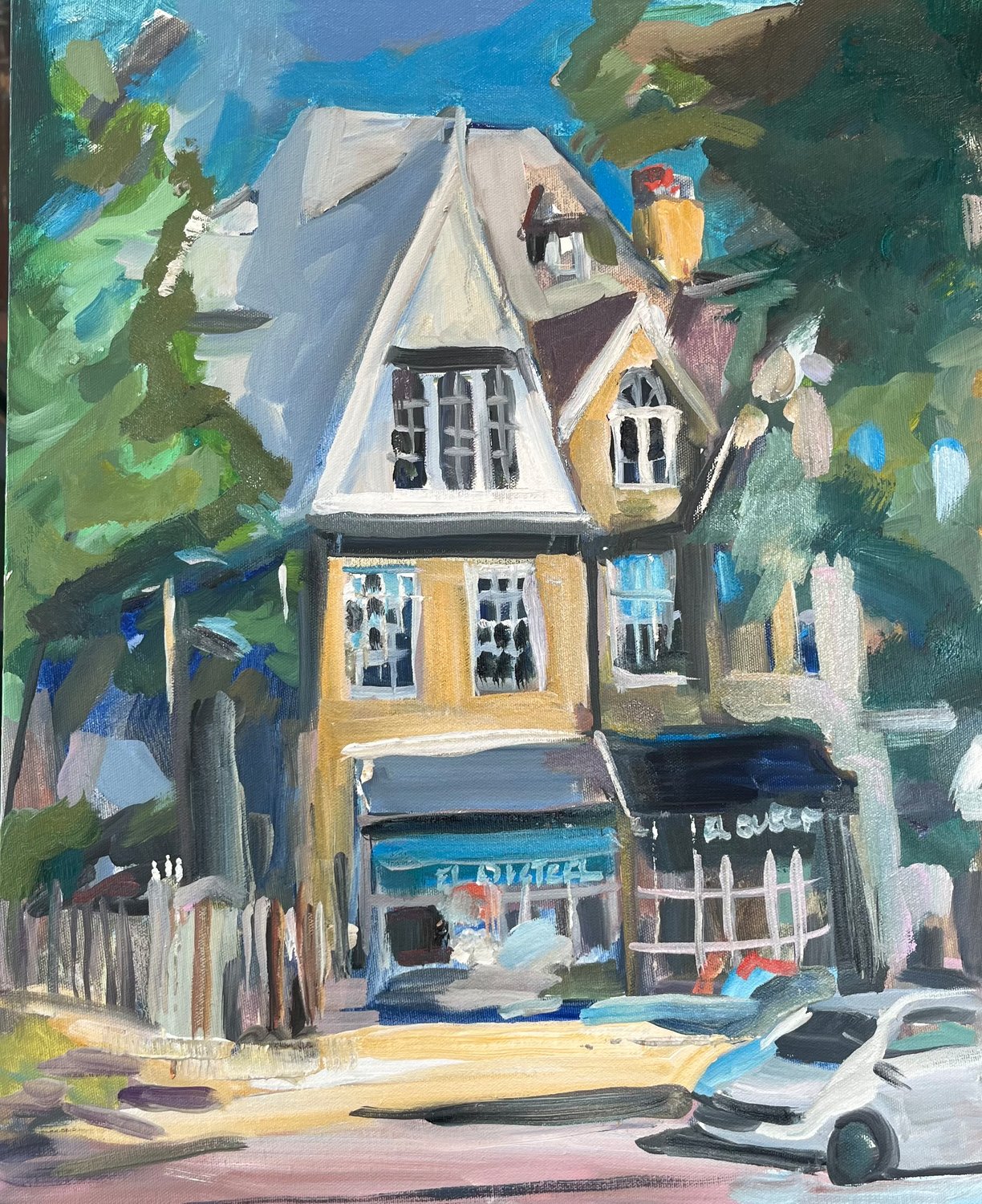 Jarvis painted this likeness of the Masonic Lodge building that housed El Quetzal the week before the Aug. 16 fire destroyed the building. 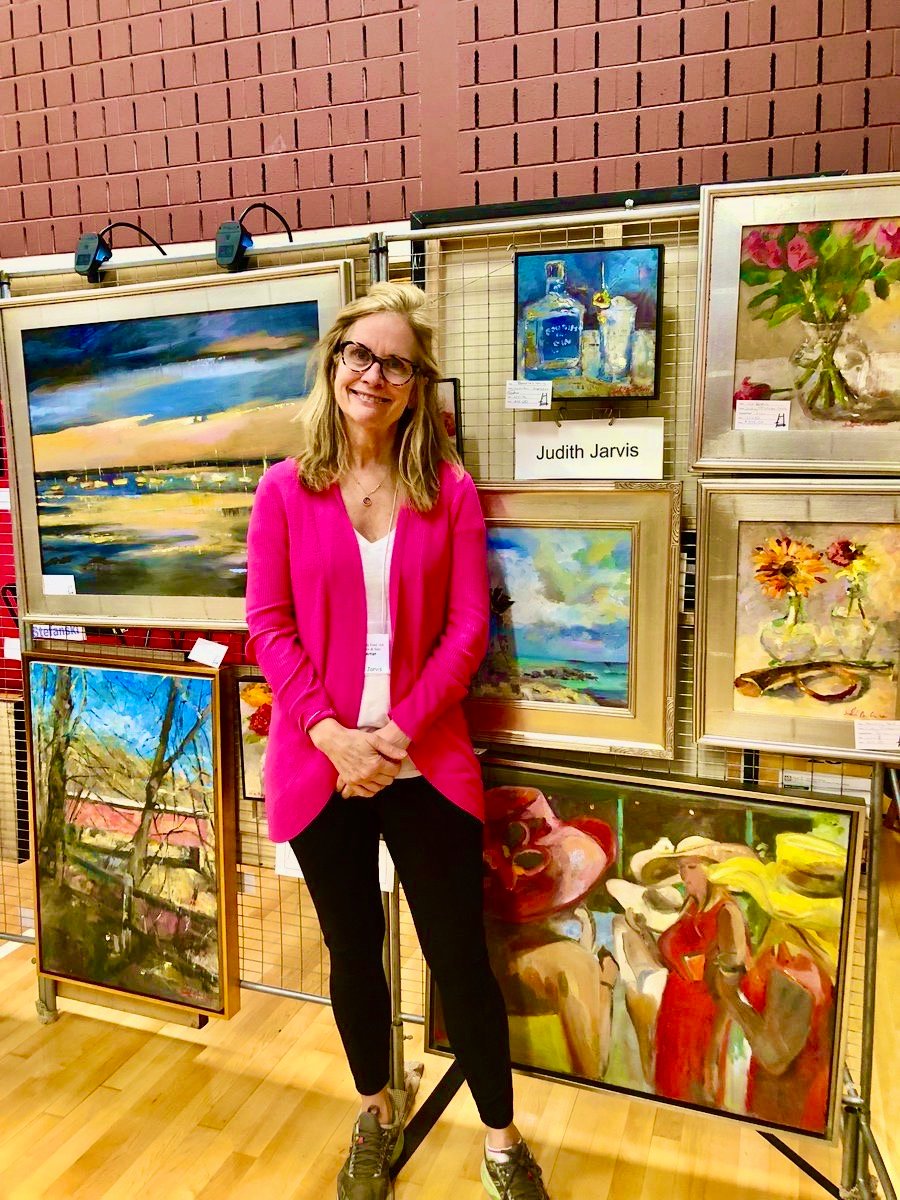 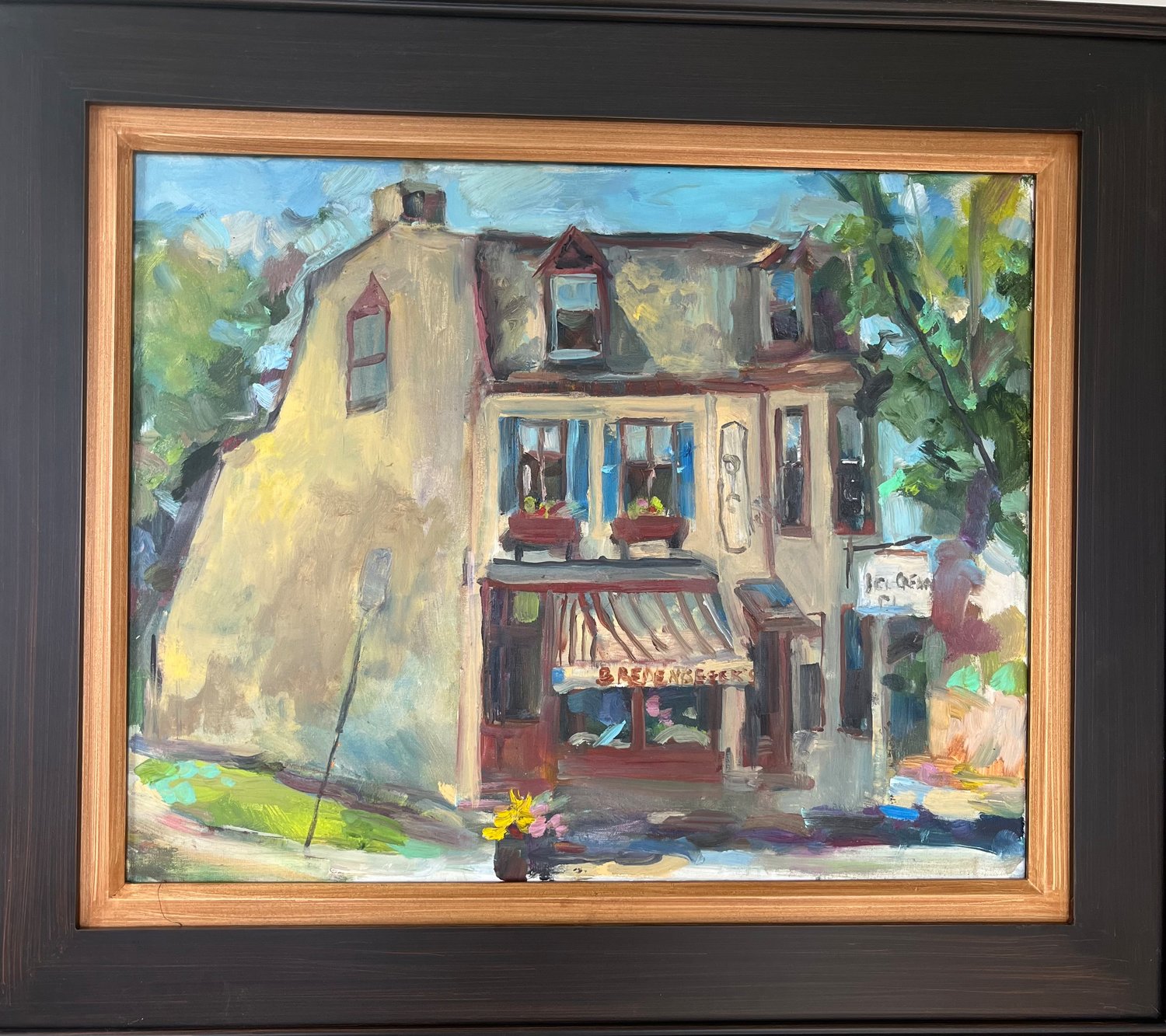 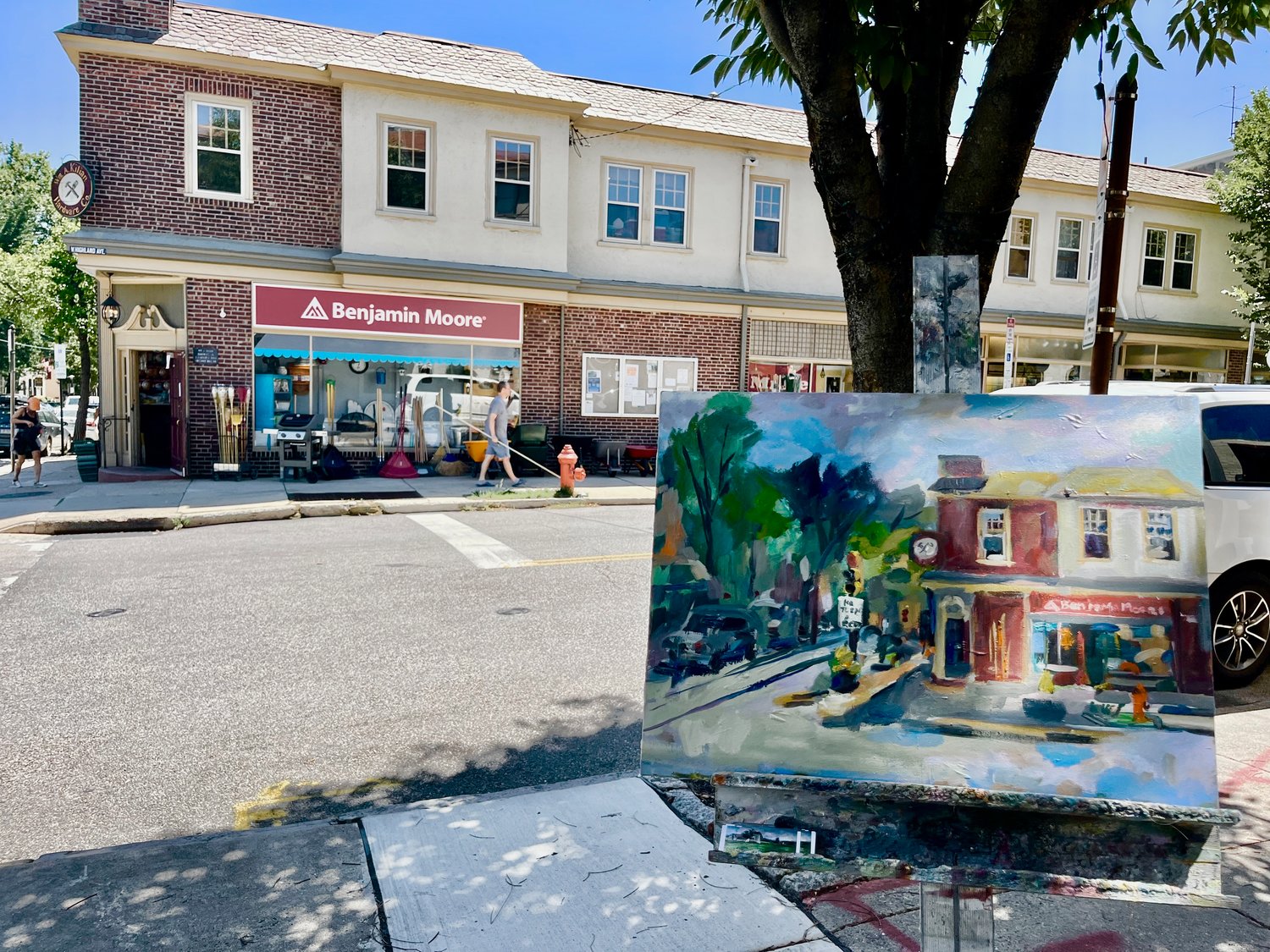 Kilian's Hardware Company, 8450 Germantown Ave. — the real thing and the painting across the street. 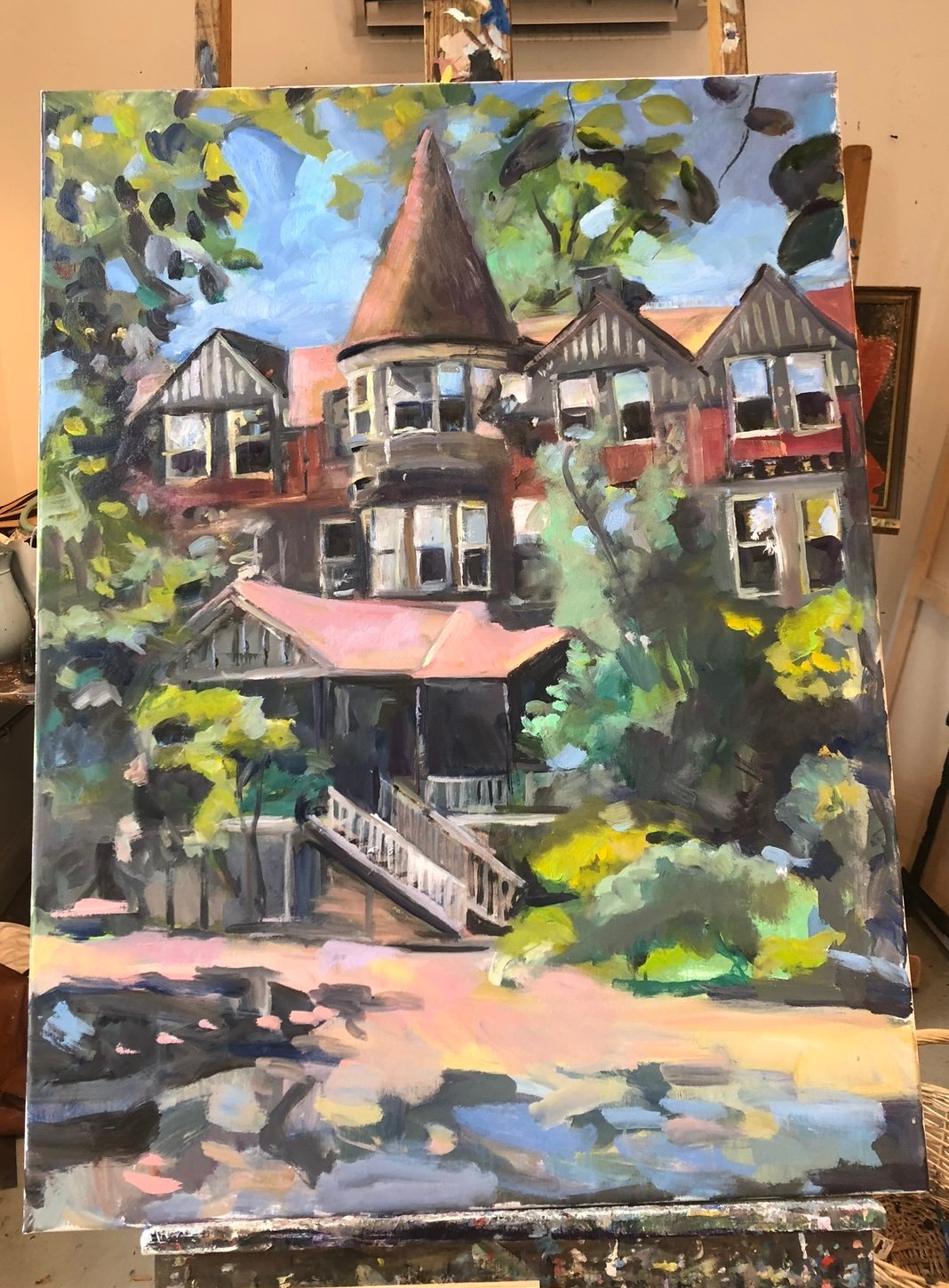 Jarvis was commissioned to paint the Wissahickon Inn (seen here) by Steve Druggan, former head of school at Springside/Chestnut Hill Academy, and his wife, Pia.
Previous Next
Posted Thursday, August 25, 2022 12:00 am
by Len Lear

Days before fire ripped through the historic Hiram Lodge on Germantown Avenue last week, local artist Judy McCabe Jarvis had just captured the building in paint. It was a lucky accident, she said, that she’d decided to include the familiar landmark in her effort to highlight Chestnut Hill’s architectural history.

“What a shock!” Jarvis said last weekend. “I am so glad no one was hurt. I just hope the building can be salvaged because it is an architectural marvel - like so many other buildings in Chestnut Hill.”

Now that the building is so badly damaged, the painting stands as a poignant example of how plein air painters can help support this historic neighborhood, Jarvis said, and encourage people to stop and really look at the beauty of the architecture that surrounds them.

And she’s working hard to make that happen. This summer, she gathered a group of artists together to go out and paint the distinctive buildings that make Germantown Avenue what it is.

“The weather has not cooperated, but that has never stopped me,” Jarvis said. “In the Brandywine area I would paint in 17-degree weather.”

Her goal is to start a thriving group of plein air painters right here in Chestnut Hill, and model it after the much more established Plein Air Brandywine Valley - which includes scores of artists who are known for painting historic sites and landscapes in Chester County. She painted with that group during the 16 years that she lived in Chadds Ford.

She’s calling her new group Wissahickon Plein Air Artists. So far it numbers about eight people - a growing band of intrepid painters who you may see setting up their easels right on the avenue.

And starting in September, on the second Saturday of each month Jarvis will exhibit their work at her own gallery, Gallery on the Avenue - which she opened five years ago with partners Julia Ward and Noelle Wister. In this first exhibit, if weather permits, she’s planning to show the works of Claire Lynch, Nancy Granda, Paula Dupont, Kathy Dobson, Louise Clooney, Anita Kroll McDonnell, Trudi Green Smith and Judith Netwig.

Jarvis, a Wyndmoor native and a 1977 graduate of Springside School, began her journey as an artist at the age of 5 - with encouragement from her parents as well as one of her favorite Springside teachers. She has been painting the buildings of Chestnut Hill since 1981, when she graduated from Tyler School of Art and Architecture.

“At Springside, I had a wonderful art teacher named Elaine Weinstone,” Jarvis said. “My father, a lawyer, painted nocturnes of Broad Street from a window at the Land Title Building in the 1960s. My mother also tried her hand at art, taking classes at Chestnut Hill College. We spent a lot of time at The Barnes Foundation and Philadelphia Museum of Art.”

Upon graduation, Jarvis set up a studio in East Falls, where she quickly discovered how difficult it can be to earn a living through art.

“I had every crappy job under the sun, from brokerage firms to waitressing, selling oriental rugs and painting faces for ‘Peanut Butter,’ a party entertainer and clown,” Jarvis said. “We went to bar mitzvahs dressed up and painted David Bowie-esque designs on guests’ faces.”

In the 1980s, Jarvis was painting lots of geometric and cubist pictures in pastels, she said, but switched over to oils when she moved to Chadds Ford, where her work became more representational. And then, at a certain point, she really wanted to come home.

“I do love Chadds Ford, but it was always Wyeth, Wyeth, Wyeth,” Jarvis said, referring to the famous landscape painter Andrew Wyeth, who painted there. “And I got tired of the strip malls. If I needed eggs or something else, it was an hour and a half to get it. I was always in the car. So I ached for my hometown - Chestnut Hill, Mt. Airy and Germantown.”

Now that she’s regularly setting up her easel on the avenue, she said, she’s getting to know the neighborhoods in a whole new way.

“Now that I am spending so much time on the street painting buildings, I meet a fascinating, very eclectic group of people who see me paint,” she said. “Some are bizarre; some stare; some like it, and some act put-upon, saying I am blocking their access to the sidewalk. I'd like to do a documentary someday about the variety of people I meet.”

Jarvis’ paintings have won many regional awards in recent years, according to Mark Sullivan, Ph.D., director of art history at Villanova University and a former reviewer for Art Matters, the region’s leading art magazine.

“That’s because they remind us of deeply felt, if inexpressible, experiences that we have all had at different times and places in our lives,” he said.

And she’s gotten much better at earning her living through art.

Pia Druggan, the wife of the former head of Springside Chestnut Hill Academy, commissioned her to paint the Wissahickon Inn, Jarvis said, as well as the headmaster's portrait, and other local luminaries.

“I am basically a working factory,” Jarvis said.

Jarvis has also exhibited with Chris Ward, Chestnut Hill’s most renowned sculptor, as they are now doing at the Gallery on the Avenue.

“We think our work complements each other,” Jarvis said.