As in the third Flick in early April, boys' events were held mostly in the morning, with girls' competition coming later on the schedule. 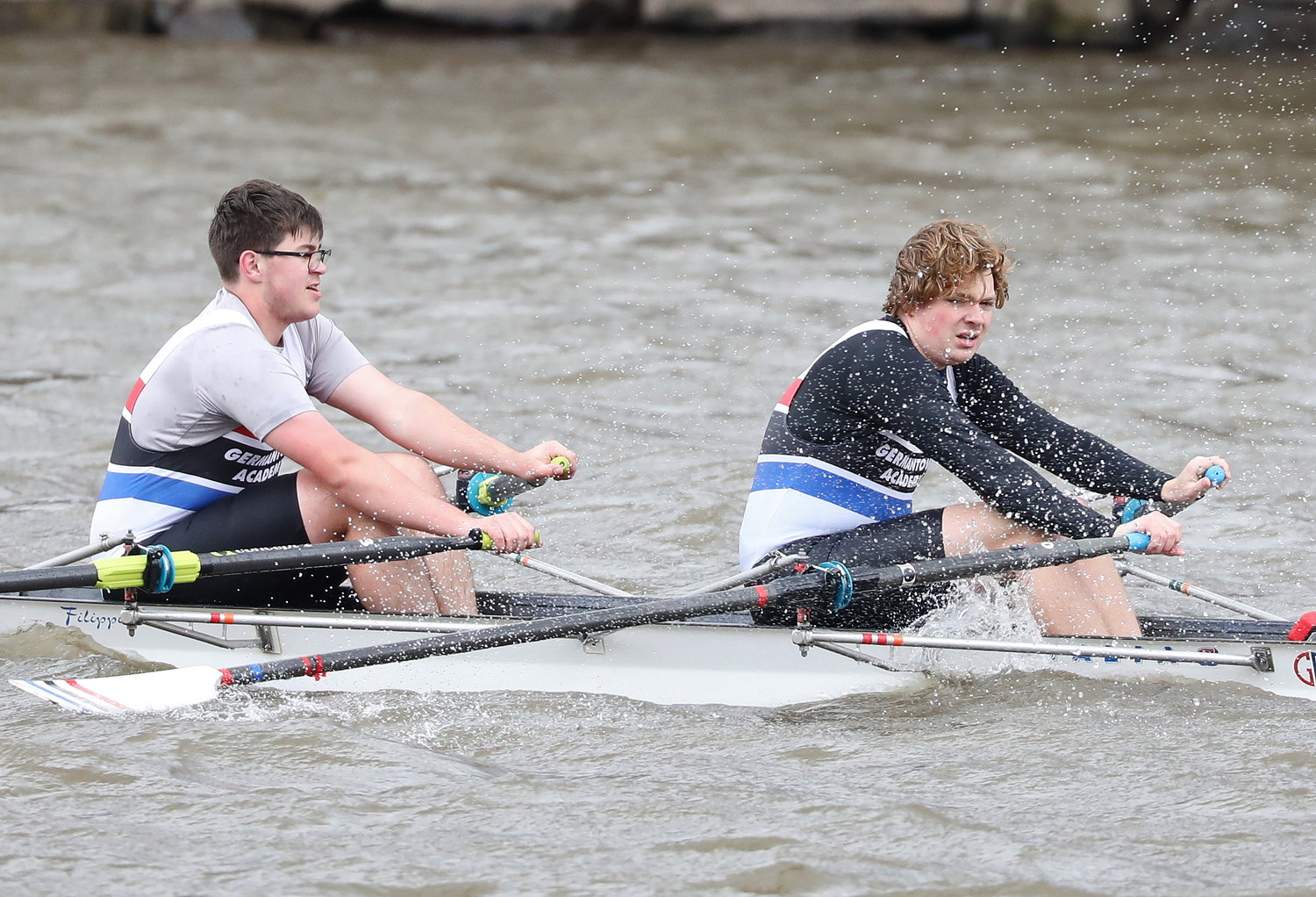 Finally, a really nice day on the river! On Sunday area rowers gathered for the last day of racing in the annual Manny Flick/Horvat series, and were greeted by sunshine, mild breezes, and a dry atmosphere after having to perform in some miserable conditions earlier this spring.

As in the third Flick in early April, boys' events were held mostly in the morning, with girls' competition coming later on the schedule.

In the very first event of the day Germantown Academy could celebrate a victory as Haiden Bonczek won the boys gig/novice single event as he finished more than half-a-minute ahead of his closest rival.

Penn Charter saw Duncan Riley place second in the JV single, as he logged the fourth-fastest time out of the two heats.

GFS lightweights Zach Branas and Ian Kohn were victorious in the second flight of the double event, although Luca Belmonte and Sammy Meyer of SCH came down the course a bit faster in the quick first flight, placing third. A number of boats originally entered by the Tigers ended up not racing due to COVID-19 protocols.

Samuel Halfpenny of the SCH Blue Devils was slotted into what proved to be the faster of two heats in the varsity single, so his third-place finish there gave him the third fastest time overall.

Penn Charter's James Glomb and Scott Sweeney won the third flight in the varsity double, but it was the first flight that produced the top four times in the event. In the second section, second place went to Michael Jackaman and Brendan Page of Germantown Academy.

Due to a large field, the JV double event followed a time-trial format near the end of the boys' program, and SCH had Elias Eckert and Matt Leon-Palfrey emerge as the top tandem out of the 13 entries.

GA had led off the boys' racing at Flick five with a victory, and SCH did the same thing when girls' competition got underway. Agharese Olagunju-McWilliams walked away with the gig/novice single race, winning by 18 seconds. Germantown Friends was the winner in the novice quad, as Emilia Cropf, Lila Donovan, Lola Kress, and Hailey Alt logged the best overall time while winning the first of two flights.

SCH's "A" boat (Madeline Percy, Joye Wingard, Ava Chavez, Maeve O'Connor) won the second section in this category and was just a little over a second off of the pace set by the Tigers in the previous race. Another Blue Devil boat in the second flight was the runner-up, thanks to Nadia Stockman, Emily Eisenman, Emma Schwartz, and Caitlin Keough.

In the JV double, Penn Charter (Charlotte Baker, Grace Agosto) placed second in the first flight and SCH (Olivia Caione, Alexandra Cross) was runner-up in the second. By the clock, the Blue Devils were four seconds quicker than the Quakers.

A successful boat for the Mount this spring, the lightweight four, had Giovanna Consiglio as coxswain this time out and a new bow seat in Sonia Marhefka (both actually appeared in this event last season). The three in between remained the same as in Flick four (Aoife Meacle, Norah McGlynn, Grace Kyle), and the Magic chewed up the competition with the best time out of the two flights by a margin of seven seconds.

In the varsity quad, the second flight featured a one-two finish by Springside Chestnut Hill (Gabriela Leon-Palfrey, Samantha Simon, Ashley Keough, Kaia McTigue) and Germantown Academy (Rebecca Zaki, Olivia Pacitti, Jenna Nolan, Blythe Berlinger). The Blue Devils crossed the line almost 20 seconds before the Patriots, but as in weeks past, the overall time to beat was recorded by Agnes Irwin in the first flight.

Even in the fifth Flick, essentially the close of the regular season, Mount St. Joseph had its true JV eight and second eight entered in the varsity event, along with the Magic's actual varsity eight.

New Jersey's Moorestown High School is proving a worthy competitor this spring, and the Magic had to work hard to earn the win in four minutes, 42.75 seconds. The Garden State group was runner-up in 4:44.69, nine seconds ahead of the next crew in the flight. Their times were easily the fastest overall.

Now it's on to the first of the big "medal" regattas in May, the Philadelphia City Championships that will be held over the first full weekend of the month.