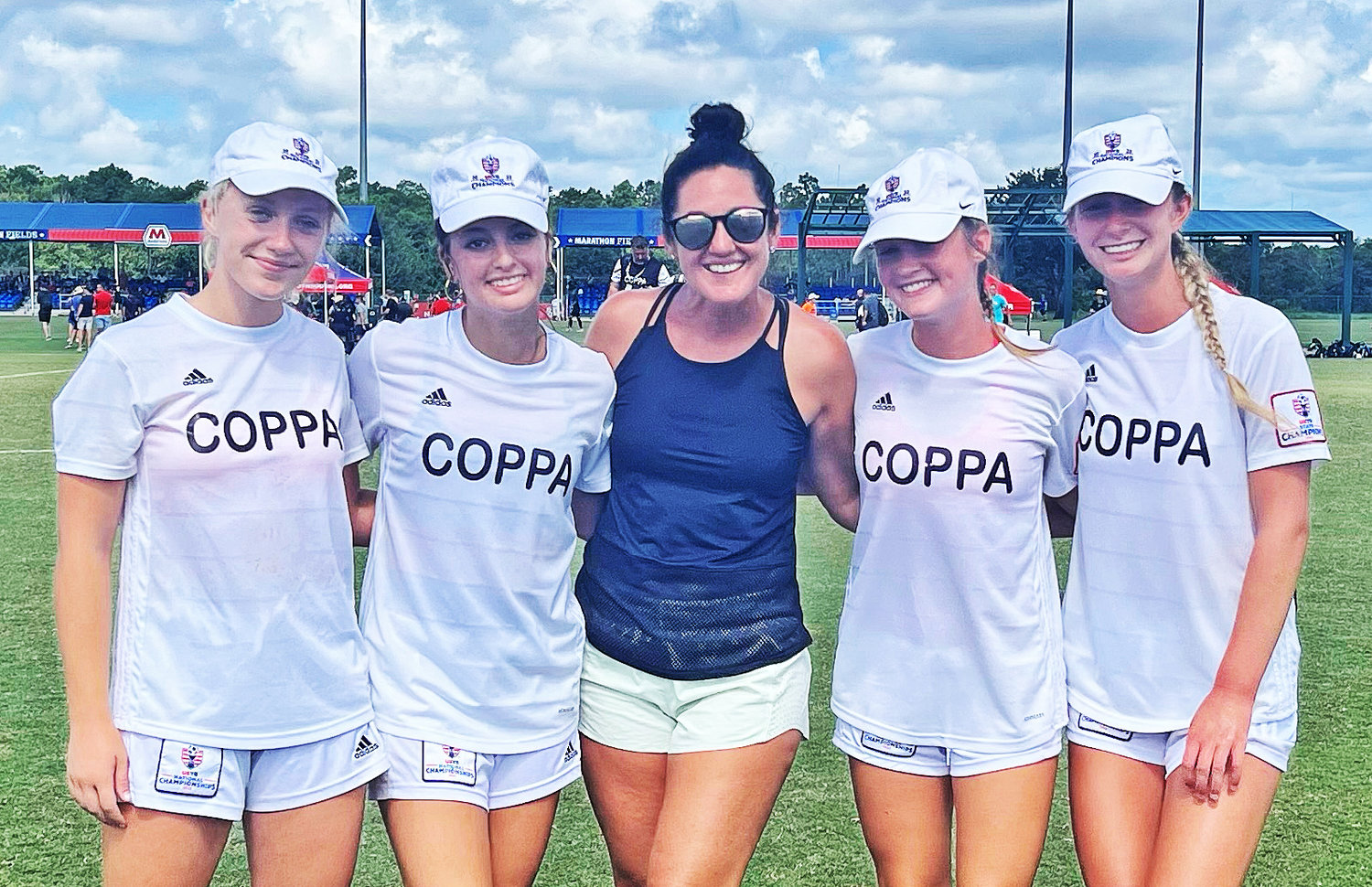 For most people, travelling to Florida in the middle of July's heat wave didn't seem like a good idea. However, for a group of elite area soccer players, the trip was worth it since they were able to come home with a national championship.

The head coach of the team, Tom DeGeorge, is the brother of SCH mentor Maria Kosmin. He was an assistant coach at SCH for two seasons before taking over the head job at Archbishop Wood, where his daughter, Ava (also on Coppa Rage) will be a junior.

Speaking of the Coppa Rage, DeGeorge said, "The team started around six years ago. Every once in a while we add a player or two, but most of the girls have been together for a long time."

Brown, the center mid for Coppa Rage, started out playing club ball for the Ukrainian Nationals. She moved over to the Philadelphia Soccer Club in 2017, the same year she entered SCH as a seventh-grader.

She observed, "The coaching style is pretty similar with my school team and my club team, which makes sense because they're siblings. There's a different dynamic in club soccer, though, part of it because you're playing against strong teams almost every game."

Another PSC coach who helped out on the sidelines during the Nationals in Florida is Jonathan Geist, head coach of the Chestnut Hill College women's team. His incoming freshman class at CHC includes a pair of 2022 Springside Chestnut Hill grads, Virginia Perry and Lauren Sullivan.

In the U.S. Youth Soccer tournament framework, there are several tournaments early each year, from which teams can advance to regional playoffs and then on to the national tournament.

U-17's made it all the way to Nationals, losing in the finals.

"I think that last game left a sour taste in their mouths," DeGeorge said of his players. "They were very determined to get back to that game and win it this year."

Early in 2022, Coppa Rage began the journey back to the finals by

participating in US Youth Soccer's newly-created National League P.R.O. (Player, Recruitment and Opportunity) series. In group play at tournaments in Orlando and Tampa, Fla., the PSC girls did well enough that they were able to advance directly to Nationals, not needing to participate in the regional playoffs.

For the next few months, they engaged in competition for the Pennsylvania State Cup, winning their age group for the third year in a row. They headed down to Florida for the national tourney in the middle of July. In their age bracket, a total of 16 teams would be divided into four four-team "groups" to start the competition.

"It was hot, but there was rain on-and-off," Brown reported.

The Philadelphia franchise didn't get off to a great start, falling behind a Dallas outfit that had been the only team to beat them during the National P.R.O. league. However, Coppa Rage rallied from an 0-2 deficit to beat the Texans 3-2, and they also won their other two games in group play. Along with the winners of the other three groups, they moved on to the semifinal round.

Late in their semifinal game, Coppa Rage was locked in a 1-1 tie with a solid ball club from Utah. With about 15 minutes remaining one of the Rage's leading scorers, Taylor Mays (Pennsbury High School) made a run into the box and was taken down, setting up a penalty kick for Coppa.

Ava DeGeorge took the kick and put the ball in the net, but simultaneously, the official gave a yellow card to the opposing coach, causing the kick to be re-taken. Since the keeper had seen how DeGeorge had lined up for the PK, it was decided that Brown would take the second one.

"I hit it to the left side, not on the ground but not too high, probably around waist-high," she recounted.

She scored, and the resulting 2-1 lead held up for Coppa Rage, which advanced to the finals against Minnesota's Tonka United.

Before big games, Brown said, "We do our chant on the sideline, and then on the field the starters huddle together and talk about the game and get each other psyched up. We knew who their best players were, but other than being aware of them we just went out and played our game."

Their "game" was more than good enough, as they triumphed 5-0 to capture the national championship. Brown finished the tournament with three goals and one assist, Linus delivered two assists, and Fitzmaurice and Franklin each assisted on one goal.

While the other three players from SCH are still in the process of choosing colleges, Brown committed last January to the University of Binghamton in New York. Brown said that during the recruiting process, Bearcats coach Neel Bhattacharjee told her that, "he liked my soccer IQ, my first touch, and the way I possessed the ball."

She said her longtime affinity for mathematics may lead to a major in finance or a related field.

Asked about preparing for collegiate soccer action, Brown noted, "I'll just be trying to speed up everything about my game, because college soccer is played at a faster pace."

She'll always be able to look back on Coppa Rage's national championship season; it was the first ever for a Philadelphia Soccer Club team.

Brown and her teammates will remain together for one more year before most of them age out of the youth soccer program.

Summing up the characteristics of the team, Coach DeGeorge said, "It's a bunch of kids who love the sport, are best friends, and play at the highest level. They're a very attack-oriented team; they love to have possession of the ball and create [scoring] chances. They feed off each other, and they have tons of confidence."