In early August I drove 1,000 miles from Chestnut Hill to Northern Minnesota, where I participated in the Treaty People Walk for the Water, a 14-day, 265 mile walk from the Mississippi headwaters to the Minnesota State Capitol in Saint Paul. Why take a week’s vacation to stand with Water Protectors so far away from Philadelphia? 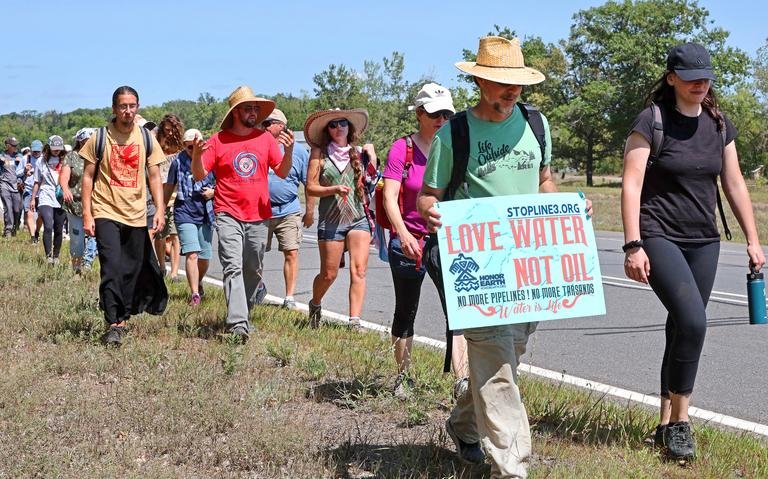 Water Protectors from the Treaty People Walk for the Water on their rest day in Brainerd, Minnesota. Chestnut Hill resident Elisabeth Torg (2nd row far right, purple shirt) participated in the Walk for several days in mid-August. The 14 day walk departed from the headwaters of the Mississippi River in Northern Minnesota and will reach the Minnesota state capitol building in St Paul on August 25th to ask for cancellation of the Line 3 pipeline permits.
Posted Thursday, September 2, 2021 12:00 pm
by Elisabeth Torg

The water in me is connected to the water in you.  Water is Life.  Protect the sacred.

These were the phrases I heard repeatedly as I walked with Water Protectors in Northern Minnesota recently.

In early August I drove 1,000 miles from Chestnut Hill to Northern Minnesota, where I participated in the Treaty People Walk for the Water, a 14-day, 265 mile walk from the Mississippi headwaters to the Minnesota State Capitol in Saint Paul. I spent several days with these Water Protectors, walking 35 miles in three days from Backus to Fort Ripley, Minnesota.

Why take a week’s vacation to stand with Water Protectors so far away from Philadelphia?  Why join in solidarity with Native peoples one had never met and might never see again? Why walk 35 miles on hot, noisy, dangerous highways?

First, Line 3 will carry tar sands – the dirtiest form of oil  – under 22 bodies of water as it makes its way from Canada through Northern Minnesota to Lake Superior. The Mississippi headwaters in Minnesota where the pipeline begins may be far from Philly but what happens to the water there is intricately connected to so many of us elsewhere.

Next, under the 1854, 1855, and 1837 Treaties, the Anishinaabe people retain the rights to farming and fishing the land and waters where the pipeline is being constructed. Farming wild rice is key to their livelihood. The Line 3 pipeline construction violates their treaty rights and their livelihood.

And August Facebook videos revealed increased police brutality against Water Protectors; young climate activists peacefully putting their bodies on the line to stop a pipeline slated to emit as much pollution as 55 coal-fired power plants were being met with violence.

So, when Germantown resident, author, and well-known Quaker climate activist Eileen Flanagan invited me to join to travel to Line 3, I said yes.

Our first connection upon arrival was the Treaty People Walk for the Water. The next day I started walking.

I was not alone in being moved to join. Water protectors came from all over. An owner of a solar non-profit from California. Jodi and Terry from Nebraska. A young adult from Michigan. Then there is the man who lives out of his van. He’d been in Colorado when he heard about the increased police brutality against front line water protectors; he decided that was a step too far. He drove his van from Colorado to Minnesota to connect with the walk. His van now serves as the support vehicle for all the walkers.  This past Saturday there were over 90 individuals participating. There are 24 people walking the entire 265 miles to the Capitol Building.

As I walked with other Water Protectors, several things became obvious. Things in Minnesota are not okay. I saw wetlands that were completely dry; there was no water in them. I saw rivers where the water levels were very low. I saw corn that was short, thin and burnt; it did not look at all healthy. The state is in a severe drought. And yet, in the past weeks and months Enbridge has been allowed to siphon off 5 billion gallons of water both from lakes and city aquifers for pipeline construction purposes. For the cost of a $150 permit!

The Treaty People Walk for the Water is Indigenous-led. Indigenous elder Carrie C. offers prayers for the safety of the walkers at the start of the day and drives the support car, and Anishinaabe band member Sherry’s presence and wisdom quietly guides the group. On numerous days they both could be found harvesting sage from the road side, laying it out, and then creating sage bundles for walkers to carry for protection and safety as we walked. Joe Morales is an Indigenous liaison for the climate group MN350 and he is largely responsible for the walk logistics and safety of the walkers.

As I walked, it became clear to me that Minnesota is not okay. Rivers are low, wetlands are dry and the corn there looks distinctly different from corn growing here in Pennsylvania; it is short, thin and burnt. The state is in a severe drought. And yet, in the past weeks and months, Enbridge has been allowed to siphon off five billion gallons of water both from lakes and city aquifers for pipeline construction purposes.

Indigenous leader Carrie Chesnik, Oneida Nation Wisconsin, taught me the most about the meaning of water to her people. To them, water is sacred, something to be respected and cared for. She talked passionately about how water was never meant to be traded as a futures commodity. The urgency in her voice was evident as she advised a local Minnesota woman to organize friends to write to the President and Governor to urge them to pull the permits on Line 3.

The pipeline is forecasted to be finished by early September. However, they have not yet flipped the switch and oil does not yet flow through Line 3.  We need to do what we can do to ensure that it never does. To help, please write to your government officials and the Army Corps of Engineers and urge them to pull the permits to Stop Line 3.

A longtime resident of Chestnut Hill, Elisabeth Torg currently works at Friends Council on Education, the national association of 74 Quaker schools.  Elisabeth learned about Indigenous-led efforts to stop Line 3 from her 23-year-old; they have been an active Water Protector at Line 3 in March, June and in August.

Advent is a time to slow down