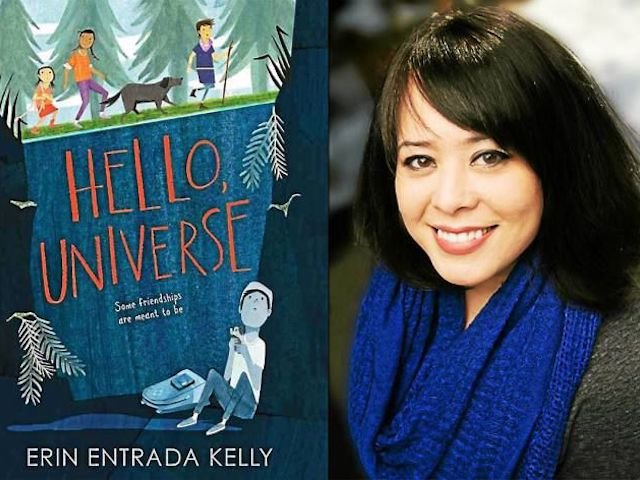 Erin Entrada Kelly may not be a household name yet, but if your household has small children in it, you just may have one or more of her books. Kelly, 42, is a Filipino-American writer of children's literature who was awarded the 2018 John Newbery Medal by the Association for Library Service to Children for her third novel, “Hello, Universe,” which was also a New York Times best-seller and is currently being adapted into a feature film by Netflix. The Newbery Medal is given annually to “the author of the most distinguished contribution to American literature for children.”

Kelly, who has written four other children’s books (her latest, “Lalani of the Distant Sea,” was just released Sept. 3), will be coming to the Big Blue Marble Bookstore, 551 Carpenter Lane in West Mt. Airy as part of the Mt. Airy Village Fair on Sunday, Sept. 8. She will be reading from the new book at noon at the Spoken Word Stage, 520 Carpenter Lane, then signing books at the bookstore.

Kelly grew up in southwest Louisiana, a few hours west of New Orleans, but now lives in Middletown, Delaware. She graduated from McNeese University in Lake Charles, Louisiana, in 2005, the same year as Hurricanes Katrina and Rita.

“My last semester was held in a trailer because the university was still under reconstruction,” she said.

Kelly’s first semester of college was in 1995. It took her 10 years to get an undergraduate degree because she was a single mother, working full-time. She received an MFA from Rosemont College near Bryn Mawr in 2016.

Last week, Kelly answered the following questions in an interview with the Local:

• Who are your favorite writers, past and present, and why?

“Judy Blume was my favorite author when I was a kid. I felt like she was writing books just for me. One reason Blume is timeless and extraordinary is because she truly understands the inner life of young people. One of my favorite authors in young adult literature today is A.S. King because she pushes readers outside of their comfort zones, makes them think and is never patronizing.”

• Which of your books was the most difficult to write and why?

“My first book, ‘Blackbird Fly,’ was the most difficult to write because it closely resembles what I went through in middle school, and that wasn't a great experience.”

• Which of your awards are you most proud of?

“The Newbery Medal, of course, because it's the most prestigious award a children's author can receive. The Newbery Medal is an absolute life-changer. I'm also very proud of the APALA (Asian Pacific American Libraries Association) Award for Children's Literature, which I received for my second book, ‘The Land of Forgotten Girls.’ It is my personal favorite because the committee is comprised of Asian-Pacific American librarians, and many of my books explore that part of my identity.”

• How has your ethnic heritage influenced your work?

“It's influenced me greatly. Our ethnicity plays a pivotal role in how we view ourselves and how others see us. It colors our worldview in many ways, which I explore in my books in one way or another.”

• Who is Marlowe the Gentleman Mutt? (mentioned on her website)

“He is the best dog in the world. As soon as I moved to Delaware, I contacted rescue groups in the area. I found Marlowe through All Mutts Matter in Wilmington and fell in love with him instantly. He is a mix between a Maltese, Schnauzer and shih tzu. He follows me everywhere.”

• What is it about the Philadelphia Eagles that you like so much?

“I'm always a fan of the underdog. My characters are underdogs. My favorite movies are about underdogs. For most of my life I've been ambivalent toward football, despite growing up in football country. But when the Eagles made their way to the Super Bowl, I suddenly became a crazed football fan. I was at an airport in Dallas during their last playoff game before the Super Bowl. I watched at the gate. When they won, I jumped out of my seat and cheered. I startled a woman sitting across from me; she dropped her book.”

• What was the hardest thing you ever had to do?

“Being a parent is the hardest thing I've ever had to do – and continue doing.”

• What is the best advice you ever received?

“Never ask a question you don't want to know the answer to.”

• What is your most treasured possession?

“One of my most treasured possessions is a hand-carved Sungka board my grandfather brought with him to America from the Philippines when he visited my mother for the first time. Sungka is a Philippine mancala game. My grandfather was a carpenter.”

• If you could live anywhere on earth, where would it be and why?

“Honestly, all I need is a notebook, pen and a book to read. I also need trees, space and quiet and a change of seasons. If I have those things, it doesn't matter much where I am.”

• What is your most impressive characteristic?

“That's a question that would be better answered by someone else, I think! But I have a pretty good sense of humor. There is nothing more important than laughter.”

• If you could meet and spend time with anyone on earth, who would it be?

“I love history, so it would be someone from history who is dead and probably not up to having coffee … Actually, I wouldn't mind having coffee with Gloria Steinem. I read and reviewed her memoir for the Library Journal, and I have a lot of respect for her.”

For more information, visit ErinEntradaKelly.com. You can reach Len Lear at lenlear@chestnuthilllocal.com