When Britt Reyes and her team were looking for a space to house the Philadelphia stop on their international exhibit showcasing the work of Banksy, they had plenty of choices. 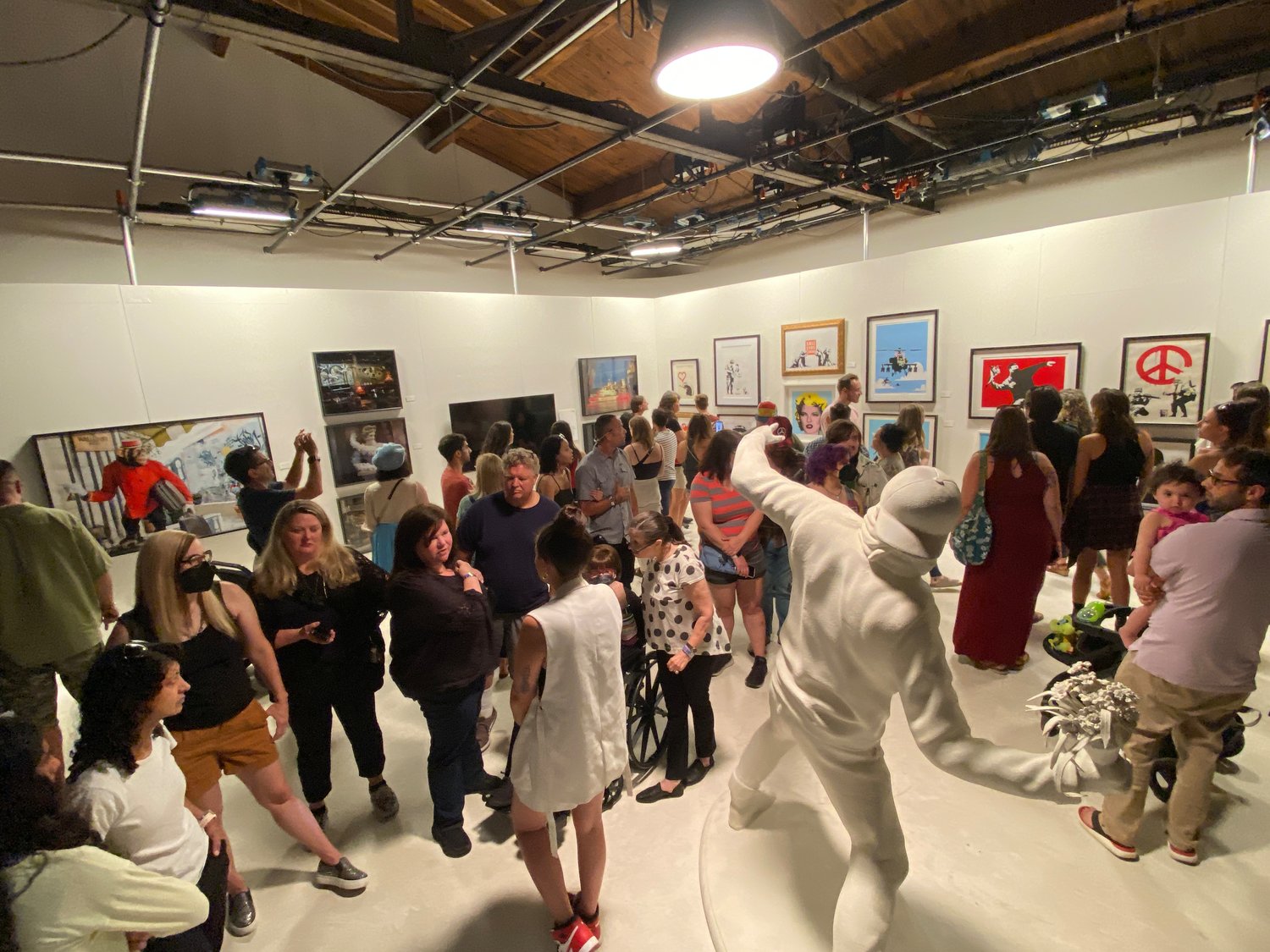 Banksyland, an international touring exhibition that features the work of famed street artist Banksy, came to Germantown over the weekend.
Photo by Tom Beck 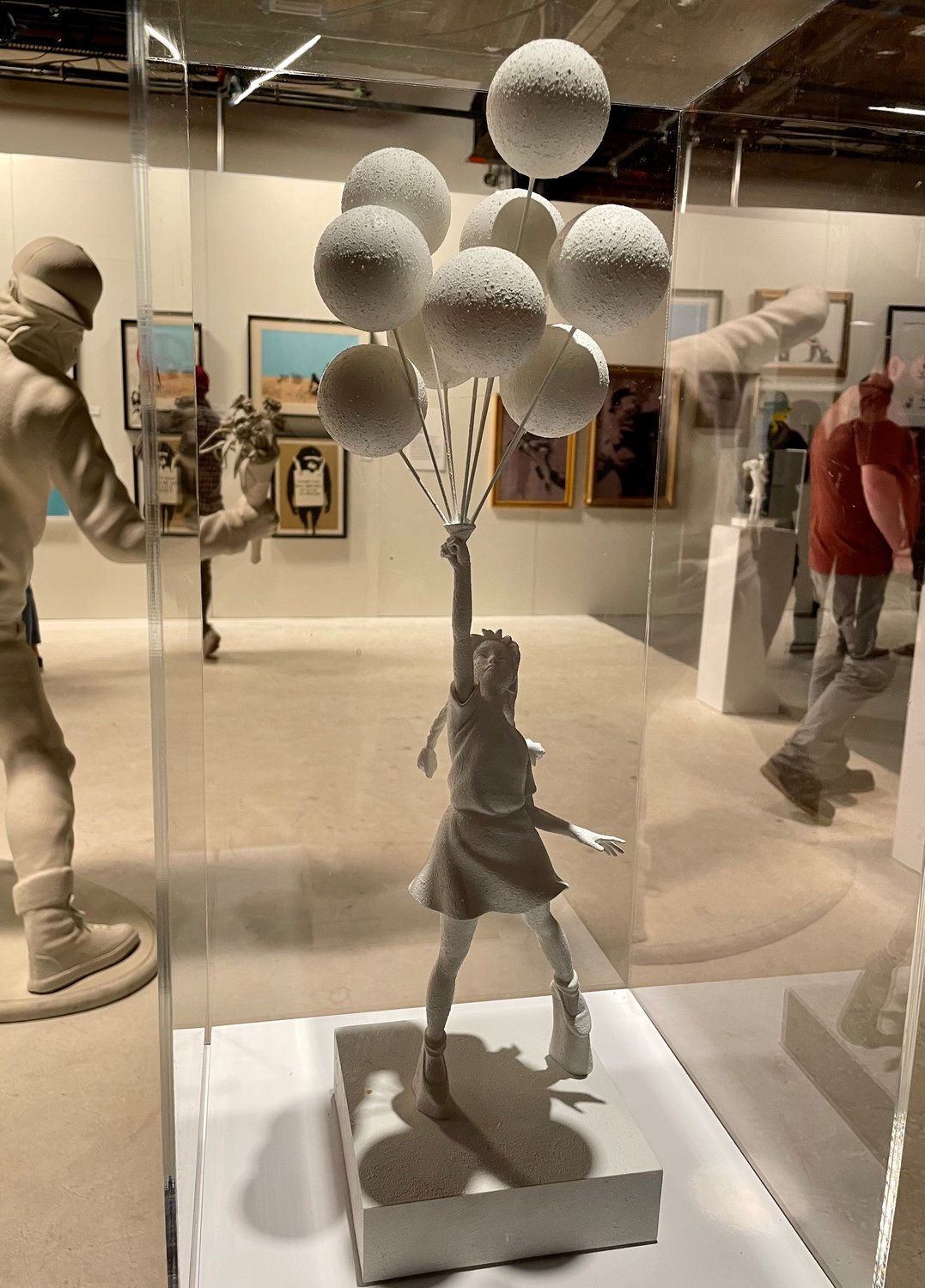 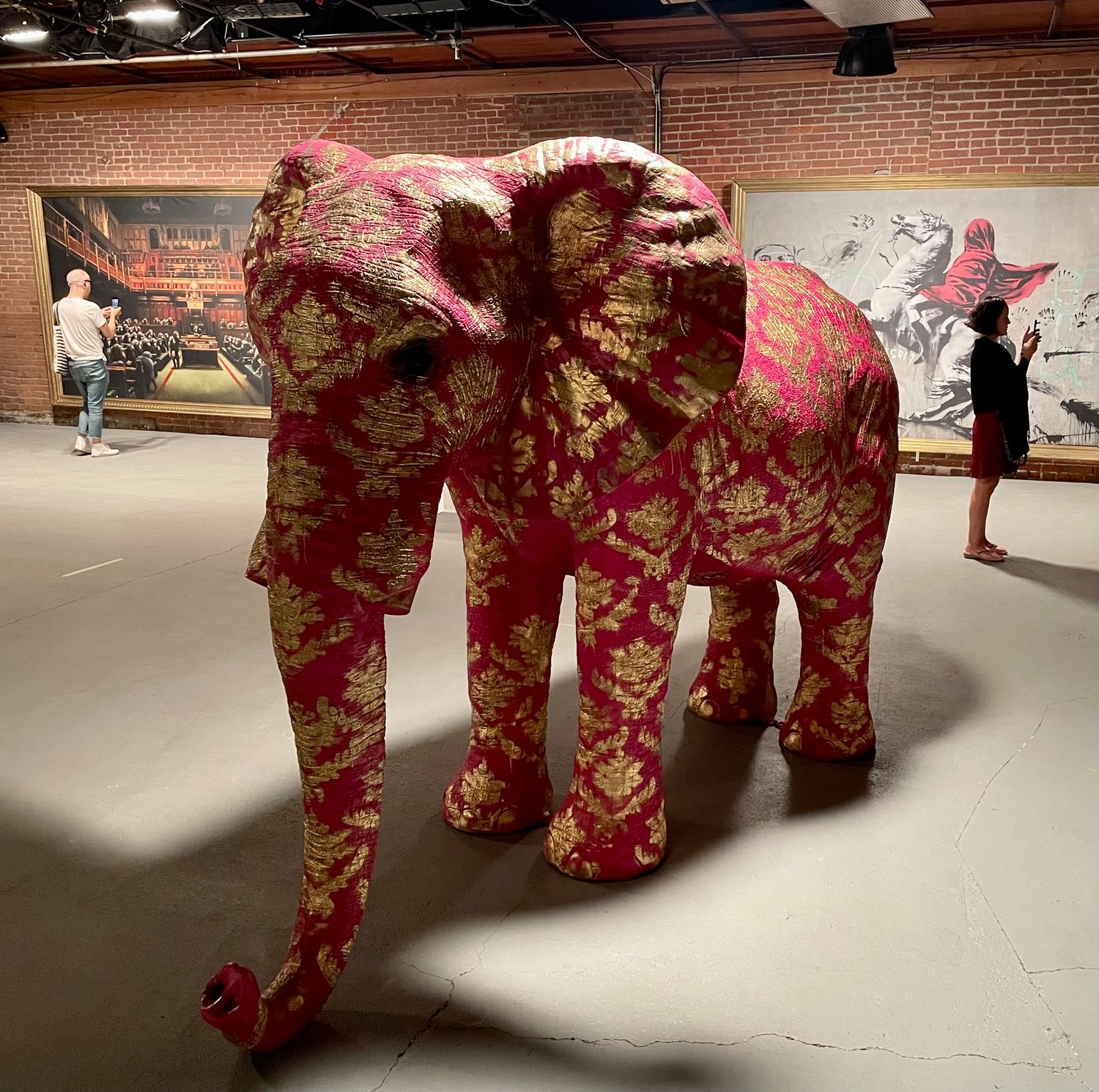 Banksyland, an international touring exhibition that features the work of famed street artist Banksy, came to Germantown’s Rittenhouse Filmworks over the weekend.
Photo by Ed Robinson
Previous Next
Posted Wednesday, September 7, 2022 12:00 am
by Tom Beck

When Britt Reyes and her team were looking for a space to house the Philadelphia stop on their international exhibit showcasing the work of Banksy, the world’s most famous street artist, they had plenty of choices.

Reyes, who hails from Portland, Ore., said neighborhoods like South Philly, Center City and Fishtown were all recommended by location scouts. And there was a place in West Philadelphia – another part of the city where she really liked “the vibe” – that came close.

But in the end she chose Rittenhouse Filmworks, a Germantown-based studio typically used for filming commercials and music videos. The 15,000-square-foot space, which also houses Rittenhouse Soundworks recording studio, was originally built as a car dealership and auto repair shop almost a century ago. And using a repurposed building in an often overlooked part of the city felt more “authentic,” Reyes said.

“This feels so much more appropriate and so much more Banksy,” Reyes said. “It's a bit off the beaten path, but so is a lot of Banksy's work.”

And then she met one of the building’s owners, Susan Deutsch – who Reyes said turned out to be wonderful.

“She has just been great – really, the best landlord I’ve had so far,” Reyes said. “And I really love this neighborhood! Everyone is just so warm and welcoming.”

Locating the popular exhibit in a building owned by a female entrepreneur and independent entity who is working in a male-dominated field is also more in keeping with the spirit of the artist, she said.

“It’s not a convention center that has several brands and businesses that own it,” she continued. “You're also kind of missing the point of Banksy if the expectation is to be served in the middle of a city center where everything is popping.”

Reyes said that when she was planning the Philadelphia leg of the tour, she was initially thrown by Californians who told her that Philadelphians weren’t the most welcoming people, and that she was “too soft” for the City of Brotherly Love. But she hasn’t found that to be the case.

“I think everyone’s just very direct and authentic,” she said. “They’re not going to blow steam up your butt. It’s actually very refreshing.”

The exhibition, which ran from Friday to Monday, featured some of Banksy’s most prominent and politically-charged artwork, including “Devolved Parliament,” “Kissing Coppers” and “Happy Choppers.”

Although the exhibition wasn’t authorized by Banksy (no exhibition is), the Banksyland team is in touch with Banksy and his legal team, which is affectionately called Pest Control, to make sure the artist is aware of it. The consequence for not doing so? Being listed on Banksy’s official list of fake exhibitions. It’s on his website. At this time of writing, there are 27 of them. If you’re especially unlucky, Banksy will have one of his people spray paint “FAKE” on the front doors in pink.

“As you saw when you came in, our doors are intact and we're not on that website,” Reyes said.

Because of the venue’s location on Rittenhouse Street, many out-of-towners think the studio is based in Rittenhouse Square, said Will DeJessa, the facility’s studio director and one of four co-owners.

That wasn’t the case with the Banksyland team, but DeJessa did say the exhibition was probably originally planned to be somewhere in Center City. Initially, the team had announced a location in the 19102 zip code.

“The way that our studio works is, it's a big, large open space that can be converted to whatever our clients need,” DeJessa said. “I think that was attractive to them, the fact that we’re a collection of artists as well, our building is reused, reclaimed, every little corner has some sort of artistic flair to it. We have an approach to the building that every part can be a set for filming, we have a green room space.”

Even many of the attendees were a bit surprised at the exhibition’s location.

“I would not have expected this to be in Germantown,” said Tyhira Monet, who came from West Philly. “But I love that it’s here. It’s like you’re walking into a whole different world to experience art.”

Much of the work is original, but some of it, for practical purposes, isn’t. One of Banksy’s most famous gimmicks came in 2006 when he brought an elephant into one of his shows in Los Angeles. The elephant was painted to match the wallpaper of the room, meant to be a literal interpretation of the phrase “elephant in the room.” Rather than lug around a 6,000 pound pachyderm, Reyes said, the exhibition opted for a much smaller fiberglass replica.

Migrant’s Soup Kitchen is another one of Banksy’s most famous works, which resides on the side of a building in Paris near a refugee center that had been dismantled by the French government. The piece features a little girl spray painting pink Victorian wallpaper patterns over a swastika, suggesting that the French government is masking the mismanagement of its fascist migration policies - or at least that seems to be how Banksy saw it when the work appeared in 2018.

Unable to tear the street art off the French building, Banksyland opted for a non-original piece for its exhibition.

“The girl with the swastika that was found outside of a soup kitchen - that is meant to validate the experience of young refugees,” Reyes said. “It would be completely out of our values and our ethics to go and take that off the wall - although people have tried. So in that case, we have been able to bring that back to full-size life.”

It’s a category of work that some local residents are seeing for the first time. Take Maurice Williams, who signed on as a temporary worker for the weekend, loading and unloading the art, checking tickets and working the door. He had never heard of Banksy before.

Williams said his neighbors have been asking him what the fuss is all about.

Reyes said she wasn’t aware of how infreqeuntly big events like this one ever come to Germantown. And some people who bought tickets before the location was announced did actually return their tickets, she said.

“For them it was a little too off the beaten path,” Reyes said. But she’s been very happy with the turnout, she said, and does not regret her decision one bit.

“The energy and the positive response just made it extra special,” she said.