Occasionally someone will ask me how I find out about so many fascinating musicians, authors, artists, etc., in the relatively small geographical we cover. 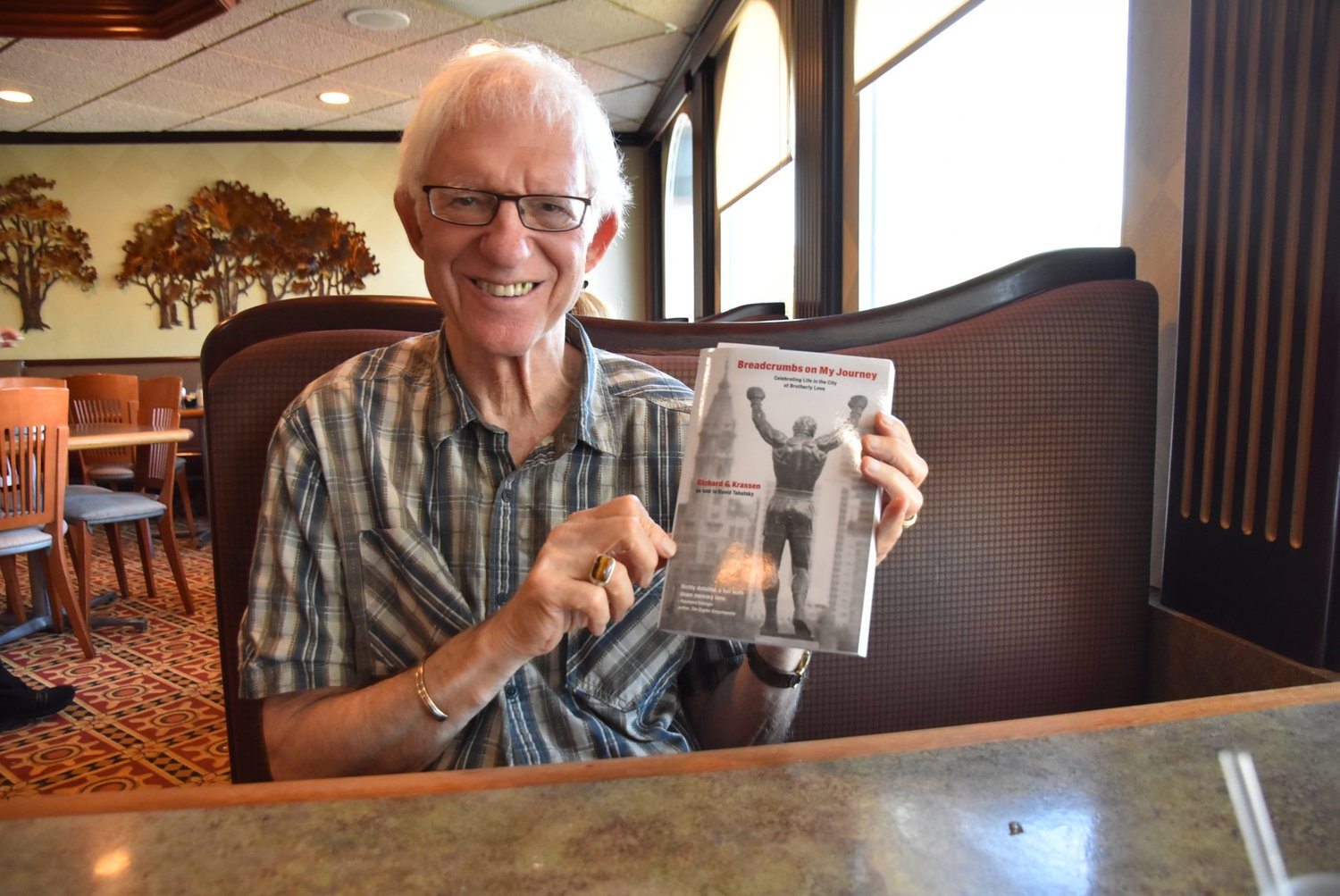 Rich Krassen holds up his memoir, “Breadcrumbs on My Journey,” written in his late 70s before he was diagnosed with stage 4 pancreatic cancer. (Photo reprinted, with permission, from the Northeast Times)
Posted Friday, February 19, 2021 10:30 am
by Len Lear

Occasionally someone will ask me how I find out about so many fascinating musicians, authors, artists, etc., in the relatively small geographical we cover — Northwest Philadelphia and the contiguous suburban communities. One way is that I ask people I am already interviewing if they can recommend any friends or acquaintances who would also be good subjects for human interest articles.

Recently, for example, I did an article on Paul Williams, 79, of East Mt. Airy, who had a career almost six decades ago as a “Doo-Wop” (street corner harmony) singer and who later spent decades as a social worker for troubled youth. When I asked Paul the question above, he immediately responded, “Yes. Rich Krassen, a guy I played basketball against in high school (Williams played for Central High, and Krassen played for Lincoln High). He would definitely make a terrific story for you.”

So I contacted Krassen, 80, who grew up in Oxford Circle, and found him to be a fascinating fellow indeed. Krassen spent most of his adult life selling insurance, and I have no doubt that he was great at it since he is intelligent (a U of P grad), funny, a terrific conversationalist and incredibly persistent.

You can find confirmation of all this if you read Krassen's memoir, “Breadcrumbs on My Journey,” published in February of 2019. “If you start reading it, you won't stop. At least I didn't,” said Mike Jensen, a sportswriter for the Inquirer for more than 30 years.

I agree wholeheartedly. I absolutely love this book, but I have to admit it's because we are contemporaries, and I could relate to the people and places in Philadelphia that Rich writes about. Singers like Lee Andrews and the Hearts, Bobby Rydell, Solomon Burke, etc., and athletes like Del Ennis, “Pickles” Kennedy, Joey Goldenberg, Walt Hazzard, etc. These names probably mean nothing to out-of-towners or young people, but to a Philly kid who grew up in the 1940s, '50s and '60s, they evoke a flood of (mostly good) memories.

Rich is seemingly able to remember every detail from events that happened 50 or 60 years ago. “I had a wonderful childhood growing up in Philadelphia in the '40s and '50s,” he explained, “and I have a photographic memory of my past. I remember every detail … I woke up one beautiful June morning and made a decision  to write the book I always promised someday I would do. I believed I had interesting stories to share.”

Once upon a time I was a snob about self-published books, assuming that they were inferior to those from traditional publishing houses. I have been disabused of that notion in recent years.

I must say that I thoroughly enjoyed “Breadcrumbs” and could not wait to get back to it each time I put it down. I've read many outstanding self-published books by local authors in recent years, but my two favorites are “Breadcrumbs” and “Flashback Girl,” by Lise Deguire, a memoir by a local psychologist who suffered third-degree burns over 65 percent of her body when she was four years old.

Most self-published authors give away the small number of books they get to friends and family members. I had never met one who actually sold more than a handful of books until Rich Krassen, who insists he has sold 1,500 books, one at a time, for $20 plus postage. And it is worth every penny. I even bought an extra one and gave it as a gift to a guy who grew up in Philly in the '50s as a sports and music nut. I should point out that the book, written in collaboration with David Tabatsky, is not all levity. There are very serious, painful and uncomfortable personal anecdotes as well.

For example, Krassen says that the most influential person in his life was “my junior high school basketball coach, Philip Golden. He made me captain. He loved me like a son. I played my heart out for that man. Many years later he had a 90th birthday party. He invited two boys he loved to the party. I had planned a trip to Paris at that same time, though. I explained that to him, but he never understood. I will always regret not being able to make it to that party.”

According to the author, “Painful experiences are part of life … The pandemic has really affected my life. I was selling my book at various venues like book clubs, men's groups, etc. This was no longer possible. I have friends that I used to see for lunch that I could no longer see.”

But far worse was the news Krassen received on Dec. 2 of last year. “I found out on that day that I had stage 4 pancreatic cancer,” he said. “Your life and the lives of your wife and family and friends are turned upside down. Being 80 is not just a number but a number that may go no higher.

“All those wonderful years that led up to this seem not to matter anymore. It is now days of pain and uncertainty. The only certainty now is that sometime in the not-too-distant future there will no longer be a living Richard Krassen. I hope I will live on through my children and grandchildren. This pancreatic cancer is terminal. I was told that six months to two years is most likely with treatment.”

For more information, email rkrassen@gmail.com. Len Lear can be reached at lenlear@chestnuthilllocal.com