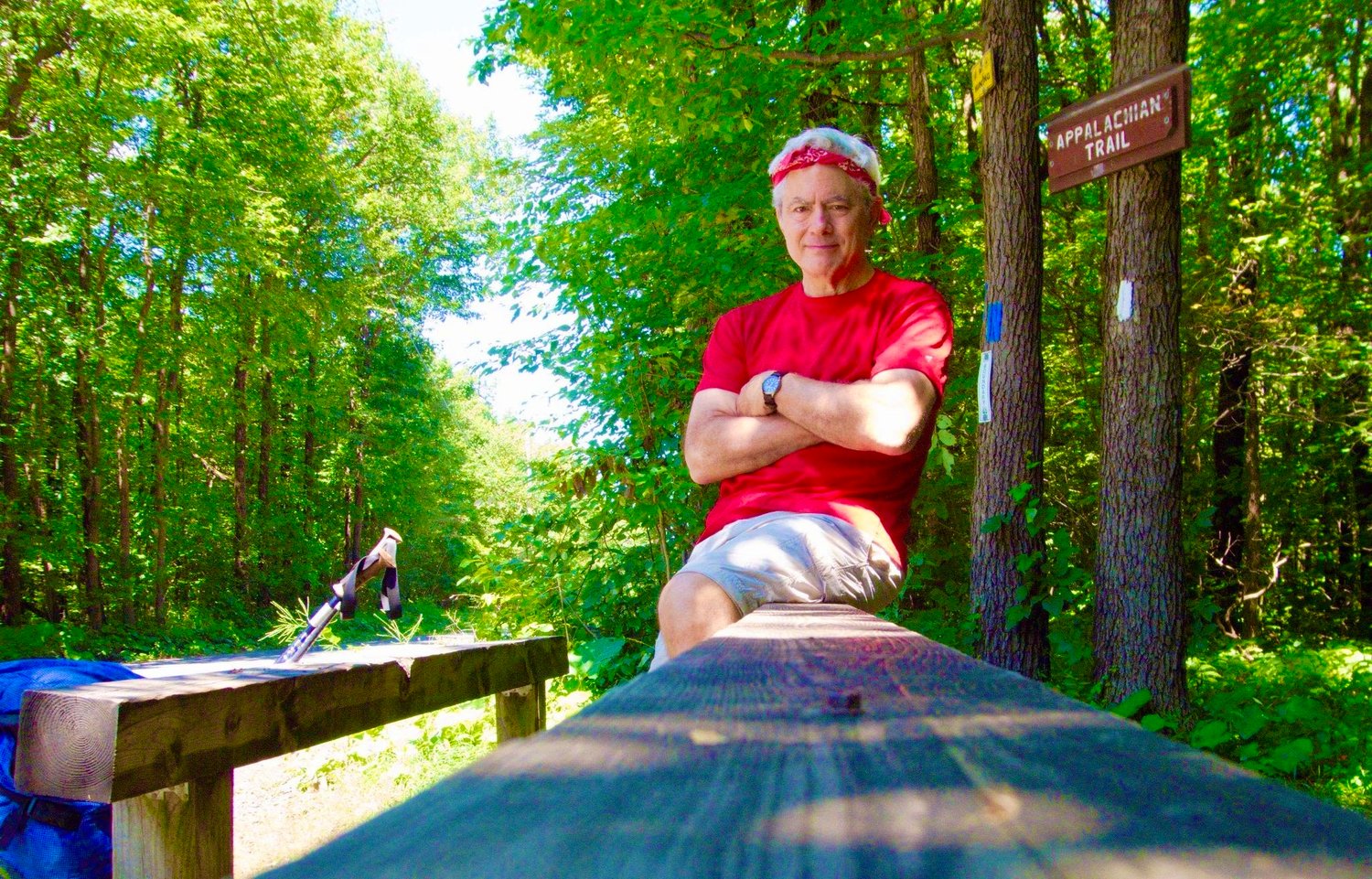 Wyndmoor's Charles Sterne III is seen where he was found so often, hiking along the 2,000-mile Appalachian Trail. (Photo courtesy of the Sterne family)
Posted Friday, February 11, 2022 6:00 am
by Len Lear

Listening to the outpouring of emotional, loving tributes to longtime Wyndmoor resident (and former Chestnut Hill and Mt. Airy resident) Charles “Chuck” Sterne III at the memorial service for him in a North Philadelphia event facility on Jan. 19, would have caused a tear to fall from a glass eye.

Stern, a legendary fundraiser for the Curtis Institute of Music in Center City, lifelong camper, animal lover and outdoor enthusiast who hiked most of the 2,000-mile Appalachian Trail, died at home Jan. 9, surrounded by his loved ones, after a long battle with cancer.

“He taught me to persevere when the going got tough,” said his daughter, Carly Sterne. “I'm proud he was my father. He faced the long battle with cancer with courage. I felt blessed to be by his side in his final hours. He was sensitive, tender and compassionate ... And he loved football, books and bourbon.”

Through her tears, Sterne’s wife, Eileen Marolla, said, “He gave me the wings to follow my dreams and leave a profession where I was making a lot of money. He said, 'So what? Follow your dreams!' He bore witness on my life, and I bore witness on his life.”

After the service, Marolla told us, “There is one thing that Chuck truly loved, and that was the early morning crew and dog park in Wyndmoor. He loved the people and all the dogs. He also loved our block of Wyndmoor Avenue. Chuck was a quiet guy, but everyone knew him.”

Curtis Institute, which is regarded by aficionados as one of the two best musical conservatories in the country (with Juilliard in New York), only accepts about 2.5 percent of its applicants, according to published reports, the lowest rate of any college in the U.S. Every student who is accepted receives a full, four-year scholarship.

Tasked with making sure that Curtis will continue to be able to offer full, merit-based scholarships to every student, Sterne created and led large fundraising campaigns that boosted the endowment from $68 million in 1993 to $220 million in 2020. “His work has helped transform our school and made a huge contribution to our long-term financial stability,” Curtis officials said in an online tribute.

Considered a virtual legend at Curtis, Sterne was so respected there that his colleagues, after his retirement in 2020, called the first-floor reading room of the library, one of his favorite places, “Sterne’s Reading Room.” In this announcement, school officials noted his generosity, kindness, and optimism.

Before his work at Curtis, Sterne served as vice president of financial and real estate plans for Philadelphia-based investment bank BNY Mellon. Among other campaigns at Curtis, he created the 183-member Founder’s Society of Real Estate Donors in 1993 and raised funds to build Lenfest Hall student housing in 2011.

When he was not working at Curtis, Sterne could usually be found walking in the woods. He had been camping since he was 12, and seen nearly every sight in the White Mountains of New Hampshire. He made many trips on the Appalachian Trail from southern Georgia to New England.

“Nature was his temple, his church,” said Sam Badawy, his close friend. “I had the privilege and honor of attending his last days. It was a precious gift to spend those days with him and Eileen. He was such a kind and thoughtful human being. He was always saying 'thank you' for the smallest service. He never had any room for bitterness or remorse. He transitioned in deep peace. I was deeply moved to be able to share that with him.”

Sterne spent dozens of summers at Camp Kabeyun in Alton Bay, N.H., eventually as chairman of its board of trustees. He arranged hiking trips and took pictures wherever he walked. He was known by the nicknames “Silver Cloud” for his white hair and “Trail Dad” for being so generous with young hikers.

Sterne graduated from Cheltenham High School in 1965 and Penn State University in 1969 with a bachelor’s degree in economics. He married Gretchen Klein, and they lived in Chestnut Hill and had two daughters, Emily and Carly. After their divorce, he married Eileen Marolla in 1996. They lived in Wyndmoor ever since.

Sterne collected beautiful artwork but also amusing rubber stamps that he brushed on the countless letters he wrote to family and friends. He took lots of pictures of trail marks on his travels and later of nurses who looked after him. He used the same barber for 50 years and listened to Bach as well as Britney Spears. He served on the board of the Boys & Girls Clubs of America and was a member of the First United Methodist Church of Germantown.

According to his daughter, Emily Sterne Schebesta, “Dad had the spirit of a mountain man. His stamina and strength were a wonder to us. The way he approached hiking was the same way he approached life: learn from those who went before you. Go at your own pace, slow and steady. Push your children to do hard things, and always bring along a chocolate bar.”

In addition to his daughters, his wife and ex-wife, Sterne is survived by two grandchildren, his sister and other relatives. Donations in his name may be made to Camp Kabeyun, PO Box 325, Alton Bay, NH 03810.