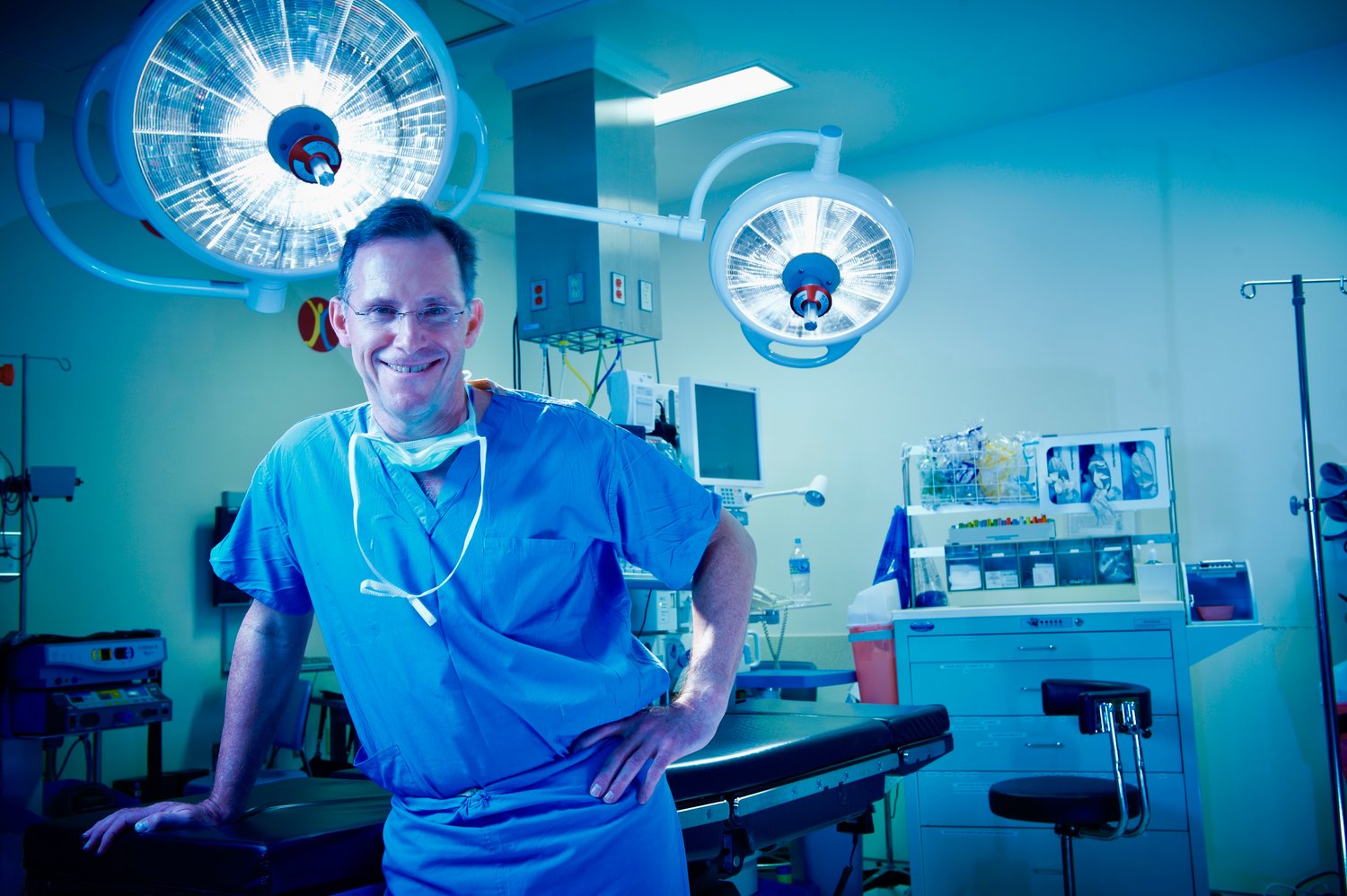 Dr. Canning in the operating room at Children's Hospital of Philadelphia, where he routinely performed miracles.
Posted Thursday, June 16, 2022 12:00 am
by Len Lear

Dr. Douglas Arthur Canning, a Chestnut Hill resident for 30 years, beloved chief of the Division of Urology at Children’s Hospital of Philadelphia, devoted family man and lover of the outdoors, died at age 65 on Monday, May 30, after suffering severe injuries from a bicycle accident on a road in Connecticut.

(No further details about the accident are available at  this time. Nearly 1,000 bicyclists die on average, and over 130,000 are injured in crashes that occur on roads in the U.S. every year, according to the U.S. Federal Highway Administration.)

“He was the sweetest man you could ever meet,” said Ashley Moore, of the CHOP public relations department. “Everyone here loved him.”

Despite his extremely busy schedule at the hospital, Dr. Canning found time for many family activities in the Chestnut Hill area.

“We loved walking in Morris Arboretum and Wissahickon Park,” said his wife, Annabelle, last week. “We loved participating in and watching our children participate in activities at Springside Chestnut Hill Academy and the Philadelphia Cricket Club, where we all played squash, tennis and swam.

“We also enjoyed running, cycling and scouting for fish on Forbidden Drive and other trails in the park … We both love Chestnut Hill. It is both part of Philadelphia, where my husband loved taking care of patients at CHOP, and a community with access to the outdoors, where we walked, ran and bicycled. We love the shops, where the owners became our friends. And we love living so close to Morris Arboretum and wide-open spaces.

“I enjoy hearing wonderful comments about my husband,” she continued. “We were deeply in love for 43 years. We did everything together, and I was incredibly proud of him. Everyone in the Chestnut Hill community called Doug if they had any sort of medical problem, not just pediatric, and he helped them all. Although it made him very busy, I was so proud to share my life with him ... He felt that providing service to others made you happy in life.”

During his senior year at Dartmouth, he met Annabelle Brainard, a sophomore at Dartmouth who was studying history. When he returned to Dartmouth in 1979 to attend medical school, he and Annabelle began a 43-year romance. They married in 1982 in Princeton, NJ, a week after he graduated from medical school.

Dr. Canning became a world-renowned expert in bladder and cloacal exstrophy and hypospadias, rare urological conditions that require sophisticated care. At CHOP, Dr. Canning directed one of the world's largest and most comprehensive pediatric urology programs.

Under his leadership, CHOP’s Division of Urology grew to 12 surgeon-scientists and 21 Advanced Practice Health Professionals and established six endowed chairs. A testament to Dr. Canning’s passion for teaching and mentorship, the CHOP Urology academic program trained more than 30 fellows and more than 100 residents.

CHOP Surgeon-in-Chief Dr. N. Scott Adzick and a long-time friend said Canning was a strong leader who was widely admired by his colleagues.

“Doug worked tirelessly to ensure that each patient he encountered received the best possible care,”Adzick said. “And he brought out the best in everyone.”

Natalie Plachter, a Wyndmoor resident and the Director of Clinical Care for the Division of Urology at CHOP, who worked closely with Dr. Canning for 25 years, agreed.

“Dr. Canning cared about every patient, and they cared about him. He cared about patients as if they were his own children,” she said.

Plachter said that people traveled from other countries to be treated by Canning because “he was literally the only person in the world who could do a certain procedure for a rare birth defect,” he said.

“He gave every patient his cell phone number, and they called him. He would text them always,” she continued. “The clinic always ran late because he spent so much time with each patient. He never rushed any patient and hardly slept. He said, 'I have a job that is a gift.' People no one else could help, he would always help!”

Those who knew Dr. Canning best invariably also commented on his love of nature. He loved skiing, sailing, cycling, fishing and running his Brittany dogs in the morning, he routinely filled bird feeders around his house and he also picked up trash in his neighborhood.

“He had a real connection with nature, and so many of our adventures as a family involved nature in some way,” said his son, John.

“He was the kind of person who truly appreciated the little things in life,” added his daughter, Maddy. “He always encouraged us to stop and smell the flowers and remember all there is to be grateful for.”

In lieu of flowers, the Canning family requests that all who loved Dr. Canning consider donating to an endowed fund at CHOP: chop.edu/dougcanning or CHOP Foundation, P.O. Box 781352, Phila., PA 19178-1352; Memo line: In memory of Dr. Doug Canning.

The CHOP public relations department contributed to this article. Len Lear can be reached at lenlear@chestnuthilllocal.com